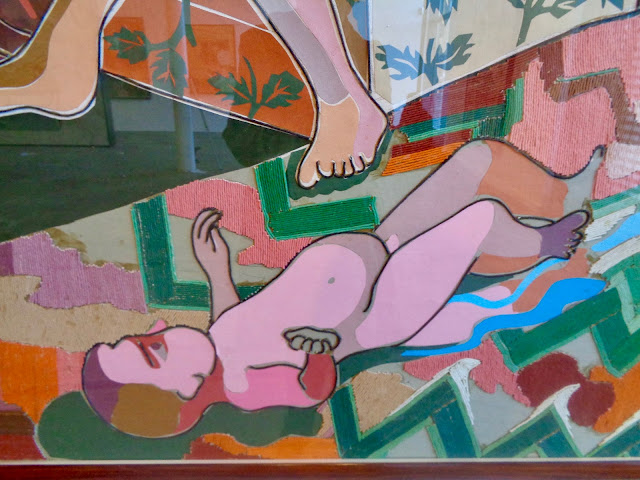 When Steven Campbell arrived at Glasgow School of Art in 1978 age 25, he was a man in a hurry, fiercely ambitious and with enormous energy. Eight years later having conquered the New York art world, he returned to Scotland with his family to continue his assault on contemporary art, producing now famous monumental canvasses teeming with fantastical narratives, vivid in imagery, complex in detail and rich in formal invention.

Campbell was known for producing paintings at terrific speed, yet between 1988-91 he created a series of 12 large-scale, experimental and complex collages, painstakingly and laboriously made, in an obsessive, even compulsive and time-consuming manner. Only shown once, in 1993, they fill Glasgow’s Tramway gallery till March 25th. 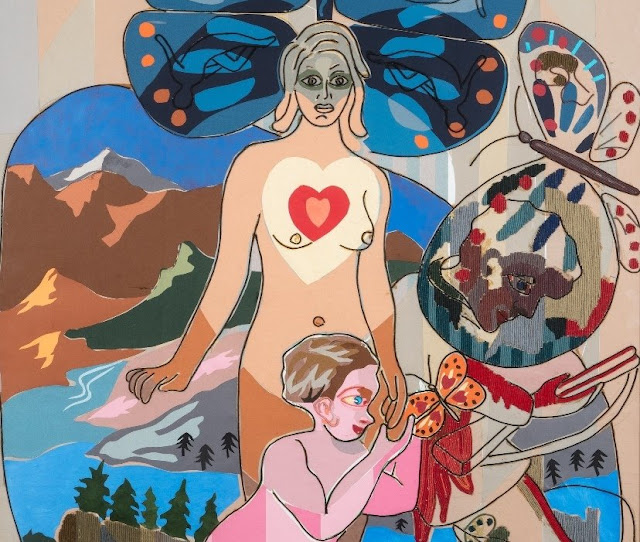 Created out of simple cut paper and yards of painted string, they took hours of careful, intricate diligence. As far removed as possible from the quick painterly gesture of oil and brush, these ornate ‘tapestries’ were constructed hour by hour. 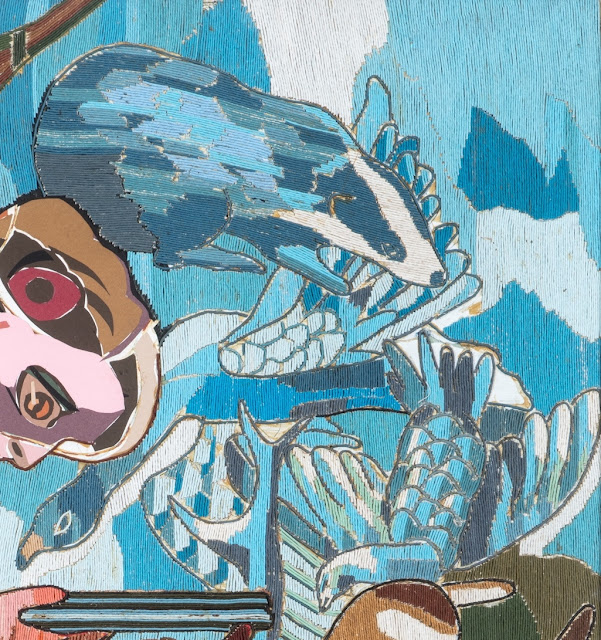 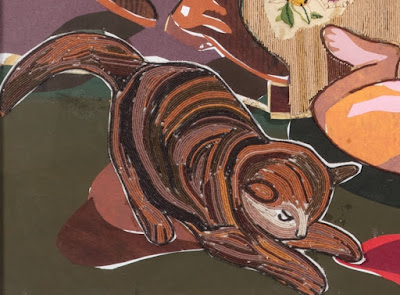 The string, (regular, ordinary cheap white household string, Campbell always kept costs to a minimum,) had first to be painted in multiple shades and tones, then hung out to dry before being cut in 5 or 7 inch lengths, and aligned, thread by thread, side by side, length by length, then stuck individually on the picture. Areas of paper were also textured or patterned by printing from scrap corrugated cardboard or stamps of curled string. 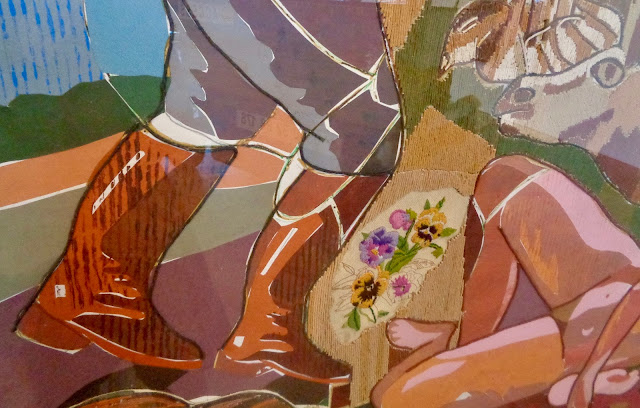 While this obsessive homemade technique would, for the vast majority, limit things to stilted, sterile, tight compositions, Campbell with his genius for compositional fluency, made exciting, dense, free-flowing but never restrained landscape-tableaux of metaphysical territories, or ambiguous, bizarre mise-en-scenes.
How – and why- did he set himself such an arduous task? Carol Campbell explains it with reference to prisoners of war who created masterpieces out of matchsticks. “A repetitive, exacting, all-consuming process can be therapeutic. I think at that time Steven needed a focus, a change of pace, and he found this contemplative, reflective practice allowed for a healing process for body and mind.” 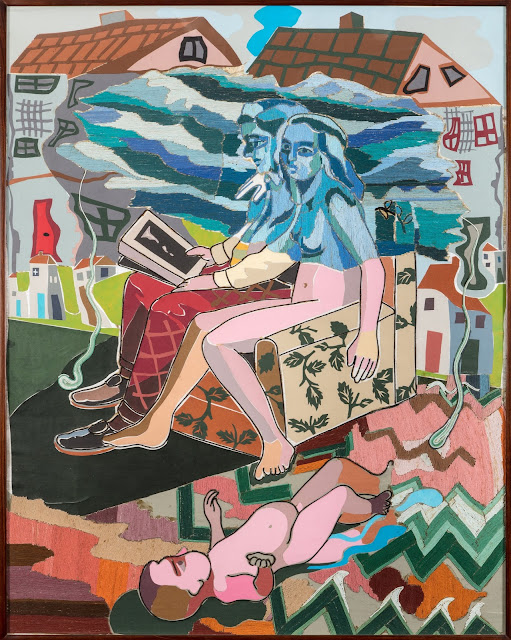 Usually, Campbell worked in a barn at their remote house in the Fintry hills. It was messy, cold, dark, draughty. But the string needed to dry, and the glue needed heat to work effectively, so he made these works on the kitchen table or floor amid the flow of domestic life. “I could get quite annoyed,” Carol Campbell remembers. “Move all this stuff, I need to get dinner!” 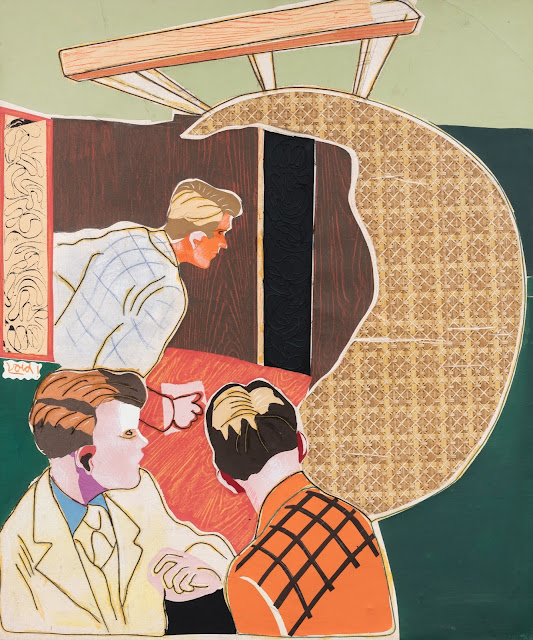 As Sandy Moffat his tutor has commented, “Campbell’s paintings were spaces or theatres of the mind where the viewer would meet and experience bizarre utopias and dystopias, and which created the feeling that the artist’s own life and personality were only screened from us by the thinnest of veils.” 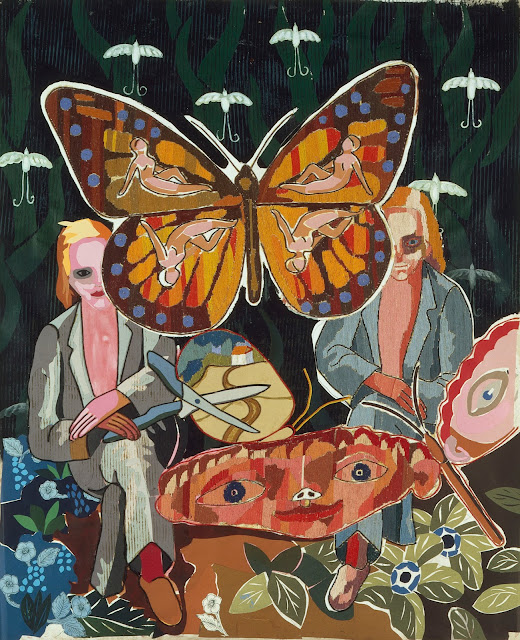 Two cousins with the same Mother ....1991
Campbell was not just well read, he devoured books, skimming through to extract just enough to feed his over-active, fertile imagination so that in these collage pictures myth merges with masque or pose to create illogical charades with a singular sense of urgency. 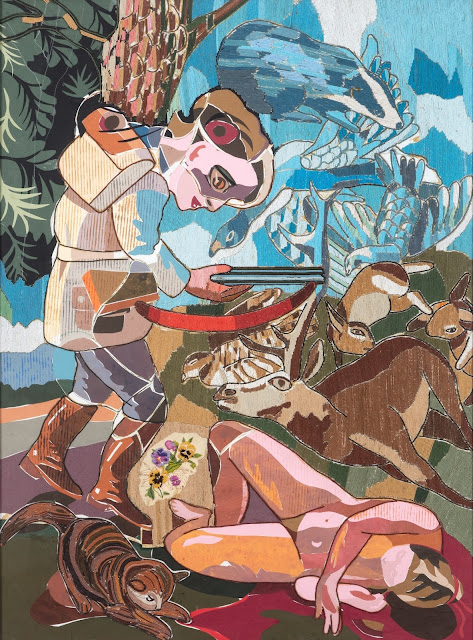 Campbell’s titles are often as disquieting and confusing as his pictures. Portrait of Two Cousins with the Same Mother who Left them Alone when she was Seventeen, from 1991, includes a large butterfly with a reclining nude to each wing, while below the path to a fairytale cottage comes under sharp-looking shears or scissors. There is obviously no return. Love – which gives the title to the show, also features a central nude plus blue butterfly wings, one hiding      Campbell’s trademark hunter with gun – who reappears the most powerful image here: Dream of the Hunter’s Muse, 1991.

This complex interweaving of doe-eyed but very dead deer and a beautiful nude woman fallen in a pool of her own blood while a kitten plays in it, and the impassive hunter looks on, is quite chilling. Despite the beautifully delineated surrounding animals and birds: badger grouse, playful rabbits and pheasant, it sings a sad song of female sacrifice and male indifference.
The Family of the Accidental Angel is another angst-ridden group where the father struggles with heavy rope while his baby lies face down on a bed of actual feathers. Did the angel’s all-seeing green eyewitness and save the child’s fall? Or did she cause it?
I Dreamt I shot Mussolini at Cowes Week, with its floundering, gaily tipping yachts and drowning waving hands, includes Campbell’s favourite murder scenario. Happily, Thoughts of a Vegetarian 1989 is more upbeat and shows Campbell’s beloved Italian sunlit landscape. 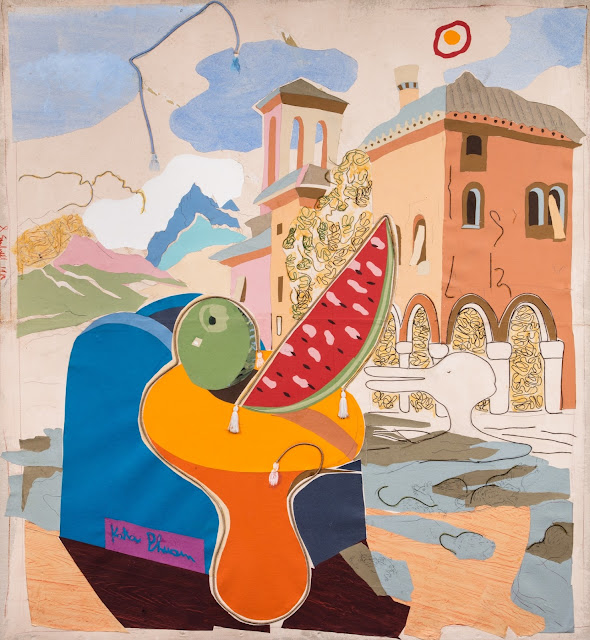 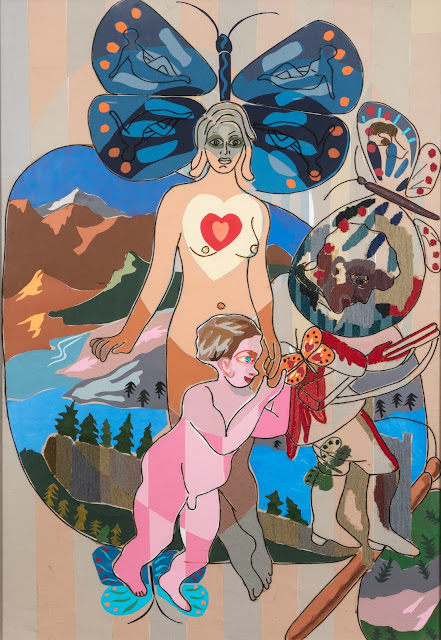 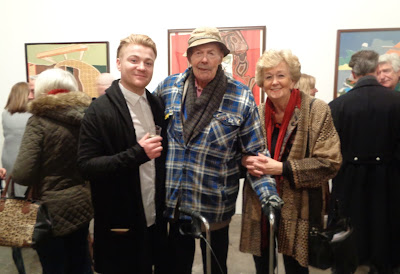 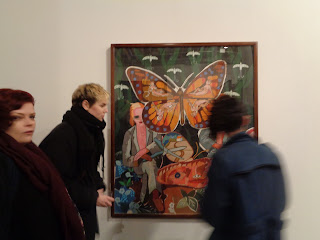