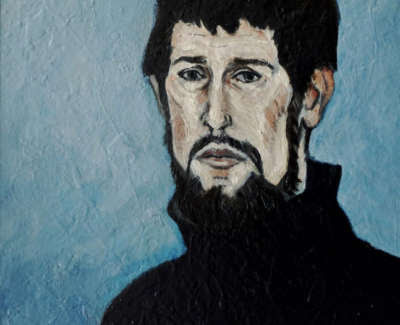 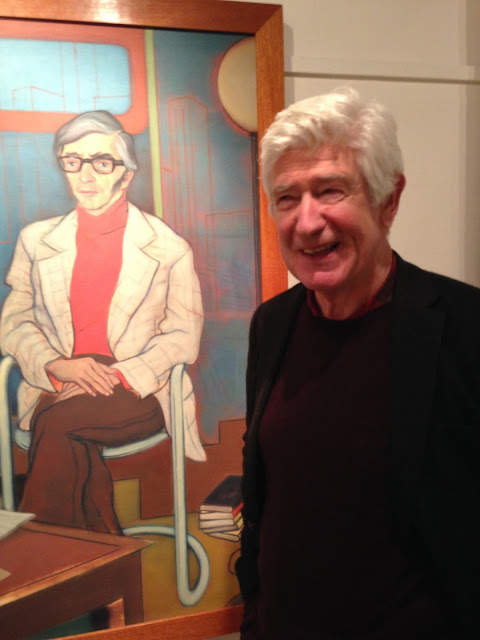 Forty years ago when the young Sandy Moffat set out to create powerful portraits of seven of Scotland's poets, he could have had no idea that he was to immortalise them for generations to come. 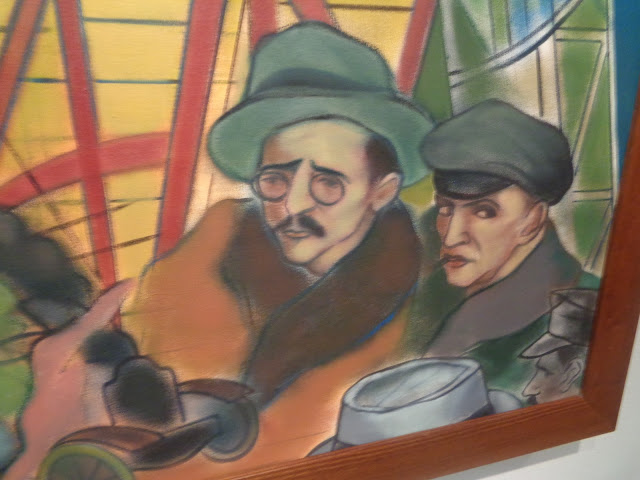 Long a friend and fan of that remarkable generation centred around Hugh MacDiarmid who met in Edinbro's famous Rose Street pubs, he aimed to position them in their home surroundings, 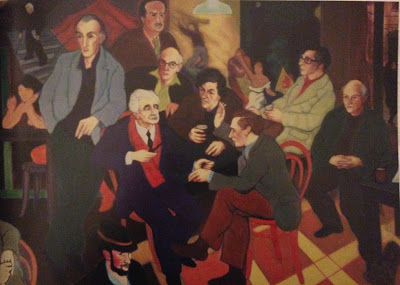 be it George Mackay Brown in Orkney, 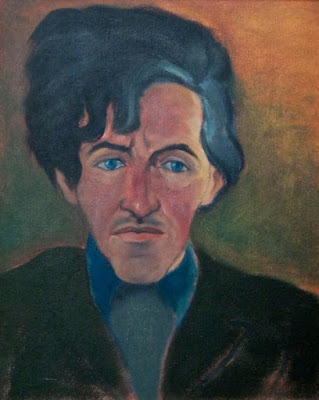 Sorley MacLean shadowed by the Cuillins, 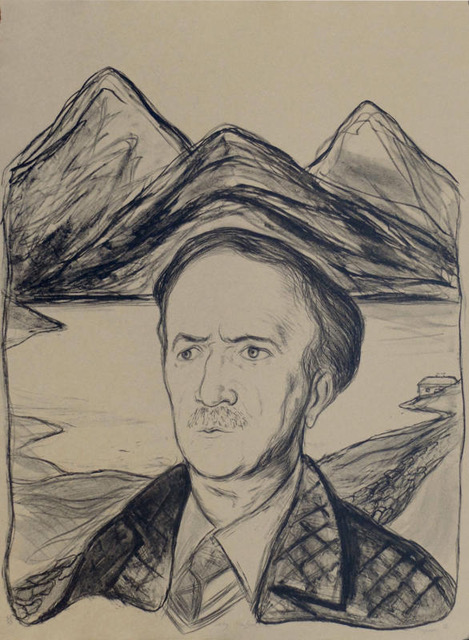 or Edwin Morgan in his Glasgow University study with his Paolozzi print & Modernist chair. 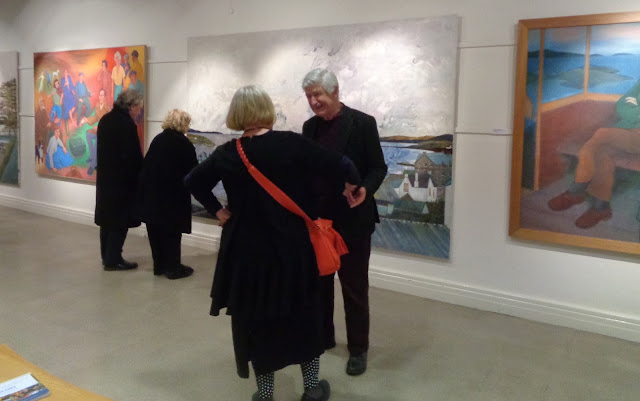 First launched at Glasgow's THIRD EYE Centre in February 1981, despite their fame, many of these key pictures have not been seen together for many years. Now, till Feb 8th they are at Milngavie's LILLIE GALLERY. 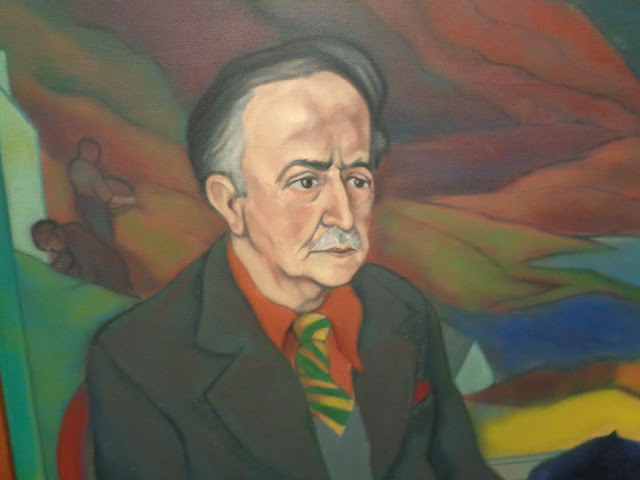 Make sure you visit. Nothing prepares you for the power of these images. Strong, simplified, assured of stroke, each mark describes a memorable, sensitive, pensive personality at one with his surroundings. And despite their solitary stance - apart, alone in thought - they each pulsate & radiate rich colour, as though the better to communicate their words, their optimistic message. 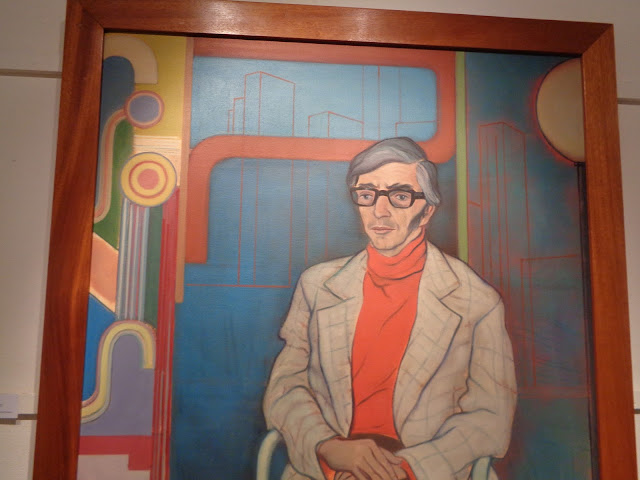 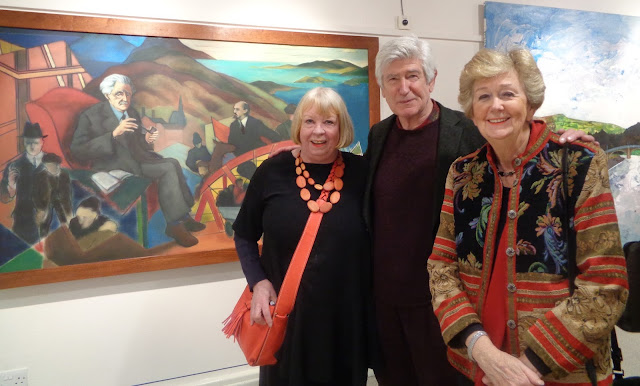 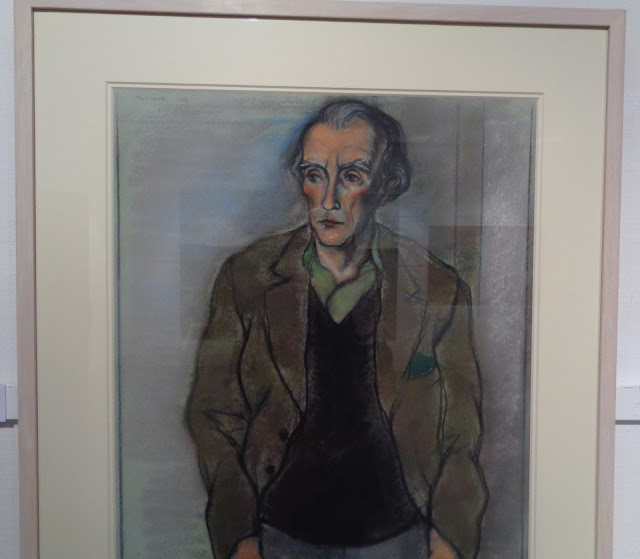 I reviewed the Third Eye 1981 show for the Glasgow Herald, but re-reading my words, I'm aware that I overlooked the profound importance of Moffat's pastel & charcoal sketches to the entire project. These swiftly caught studies with their soft line, are the key to its success. "All portraits begin with the live encounter between sitter & artist. These portrait were labours of love." 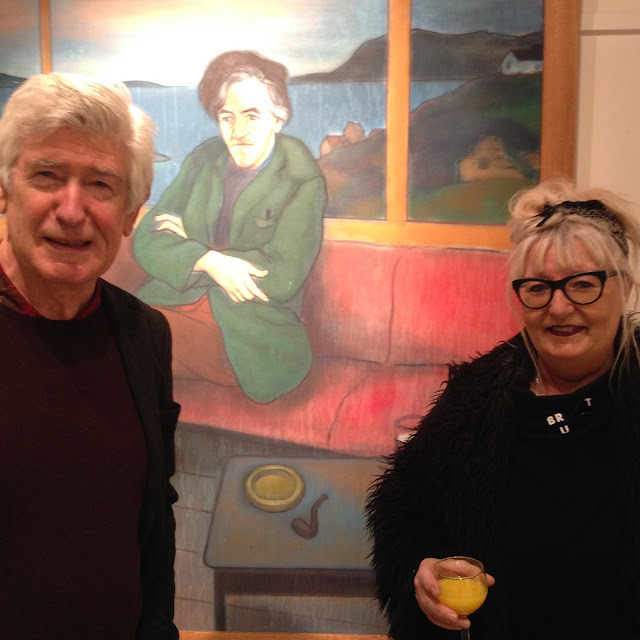 He began with MacDiarmid. Moffat was, he told me, well aware he was "just in time". MacDiarmid was 86 & already battling cancer when Moffat visited him at home at his Brownsbank cottage, near Biggar, in 1978. He died shortly afterwards. 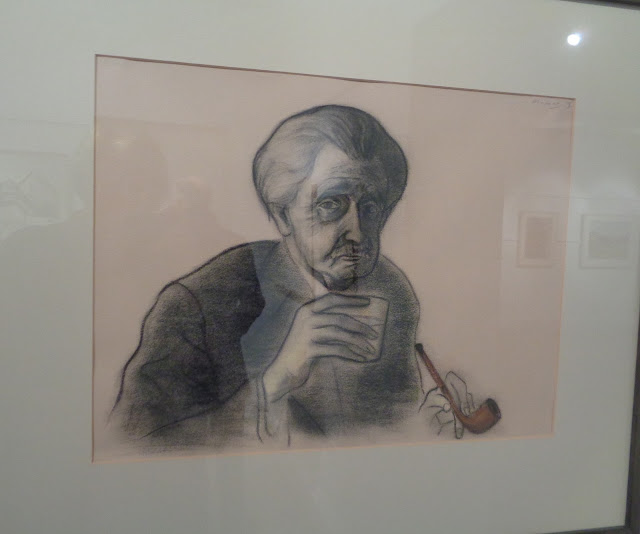 "I went with Neal Ascherson, and immediately got down to work while Neal engaged him in conversation. He was in good form. We'd taken a decent bottle of malt whisky which he said was the best pain-killer. The body had gone, but the brain was still very, very active. I drew them for a couple of hours as they talked. His wife Valda said, 'You should put your false teeth in." But he said, Oh no, no. Sandy can do that; an artist can always do things like that.'  "I kicked off with the pipe and chair of course, but I wanted the finished painting to be about MacDiarmid's vision for Scotland, a kind of history painting if u like. The landscape behind moves from the Borders where he was born, to the Shetlands where he lived in the 1930s." 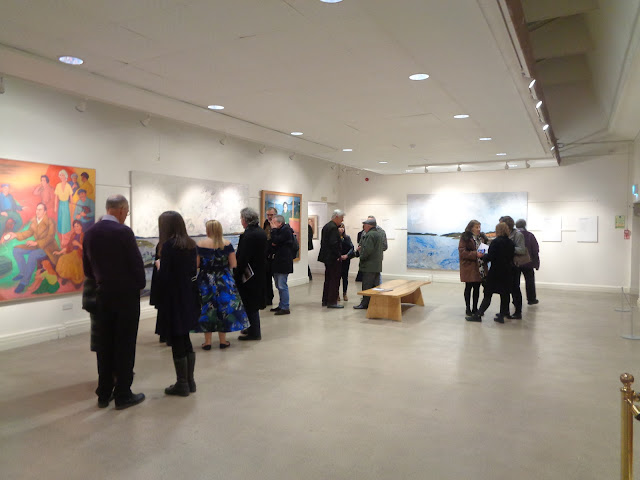 The finished picture, titled Hymn to Lenin, 1979, contained figures like Lenin & Mayakovsky, relating to the Soviet Revolution, which was a crucial event for MacDiarmid, plus John MacLean - emerging from the side of MacDiarmid's chair. Tatlin's Tower. "The picture is a straight-forward homage," Moffat said in 1981. 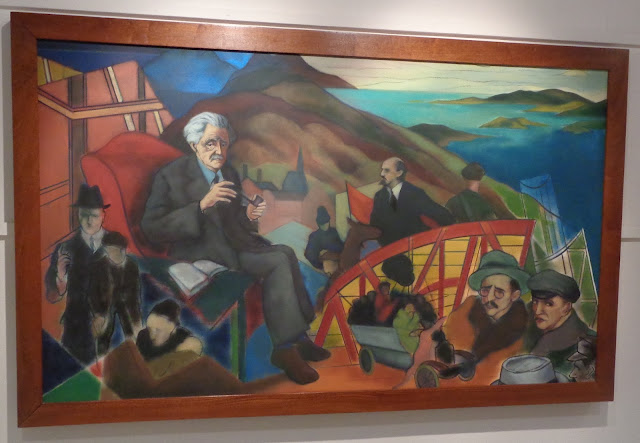 It is a magnificent picture, the dry oil handled very like Kitaj. Moffat was a great admirer of Kitaj, who along with Peter de Francia encouraged him in the Poets project. 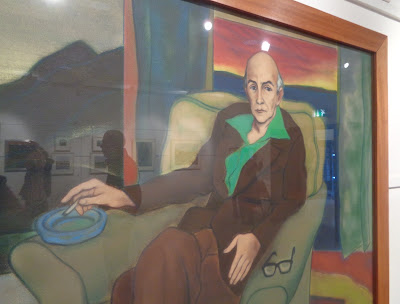 As Moffat explained, "Drawing and the finished painting are different things. Painting takes time. I'd like to be able to make a painting like a drawing, that is a cherished ambition. To have all the elements one has in drawing, the spontaneity, the vigour, the sense of design. But the point is to produce a painting that is a work of art & not just just a superficial likeness of someone." 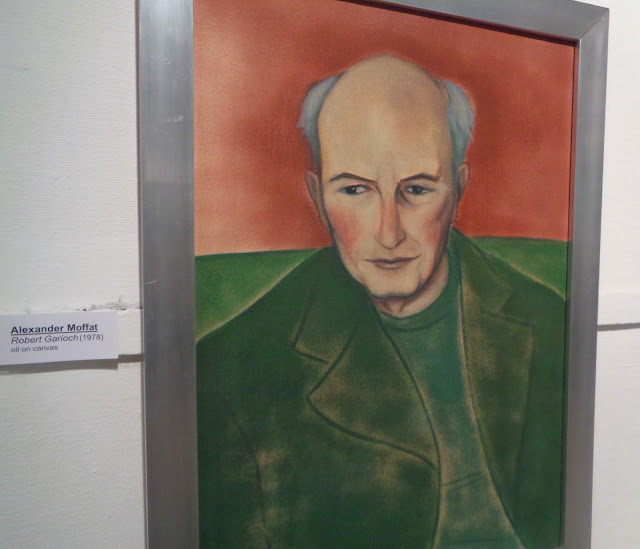 Soon Moffat had the idea of putting all the poets together in Milne's bar. Moffat has a romantic idealistic view of his student days haunting the Bohemian atmosphere where his heroes gathered and talked. "The poets took on the world and we wanted to be like them. They were political, unlike the painters. They linked art & politics in a wholly challenging way. ... These poets played a leading role, both in their verse & prose in shaping the artistic conscience of this country." 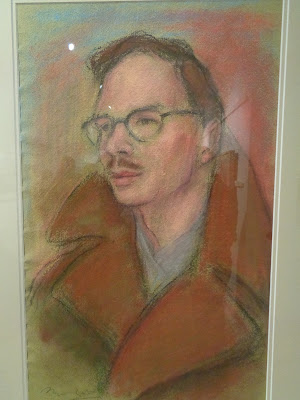 The main figure here is Sydney Goodsir Smith,  who died before the series started. He is centre stage. "It seemed right as he was always the life & soul of the party." 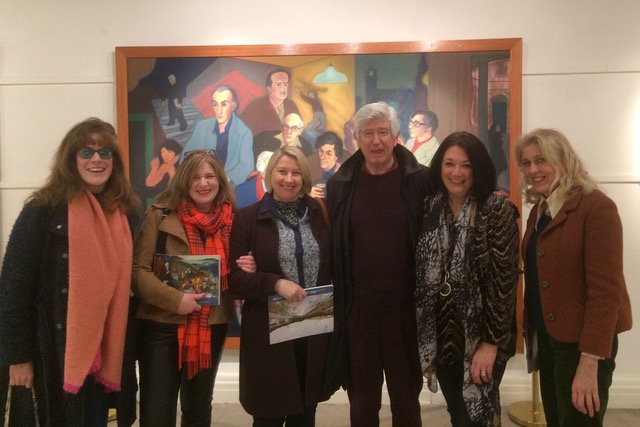 In the intervening years Moffat went on to teach & inspire many many painting students at Glasgow School of Art, retiring in 2005 after 25 years there. 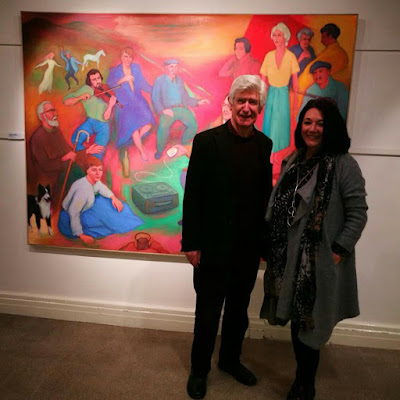 A committed portraitist, & dedicated to his task, he is credited with encouraging and steering the resurgence of figurative painting at GSA. 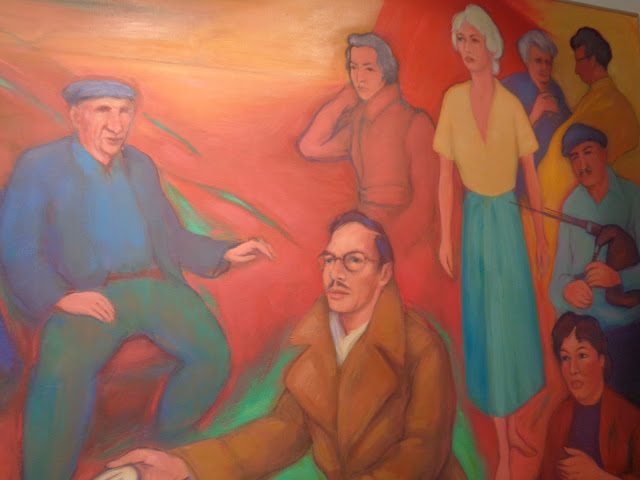 Last year Moffat tackled a new canvas: Scotland's Voices, as a companion piece to the Poets' Bar.  This latest picture, full of hot colour and joyous music, celebrates Hamish Henderson as he toured Scotland with his tape recorder in the 1950s recording traditional songs. Here around a campfire, with references to the Penny Wedding in the background, are musicians & singers: Aly Bain, Dolina Maclennan, Willie Scott, Belle Stewart, Jeannie Robertson ..." At last the women get a look in!! 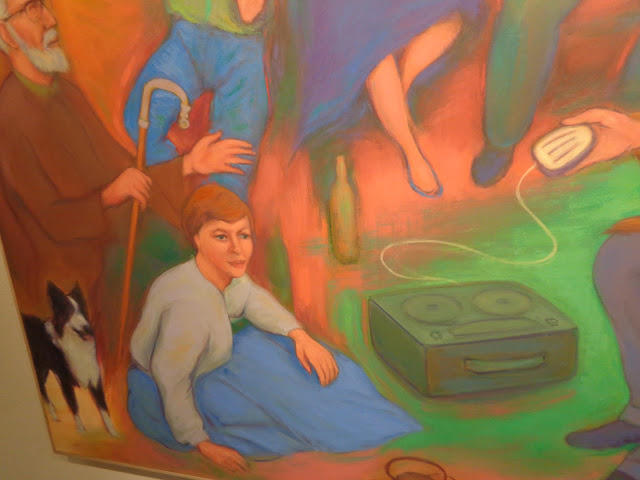 Most folk who see this show will not know the back story to its creation. Nor the hicups along the way! 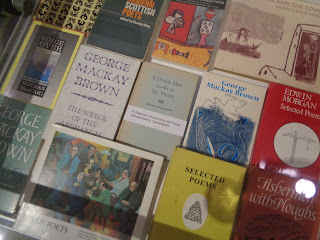 It began as a Scottish Arts Council commission - allowing Moffat the luxury of time & money, a touring exhibition &  knowing the 7 pictures would stay together.  But in April 1985 the SAC decided to dispose of its collection!  The oils were up for bids and dispersed, with Brown going to Orkney Stromness Academy (where it has got very wet) 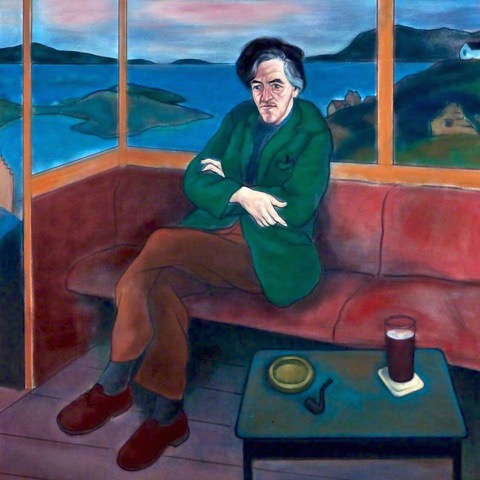 Norman MacCaig to Edinbro City Art Centre, & Sorley's portrait  to the Isle of Skye. Happily the rest belong to the SNPG but are not now generally on show. 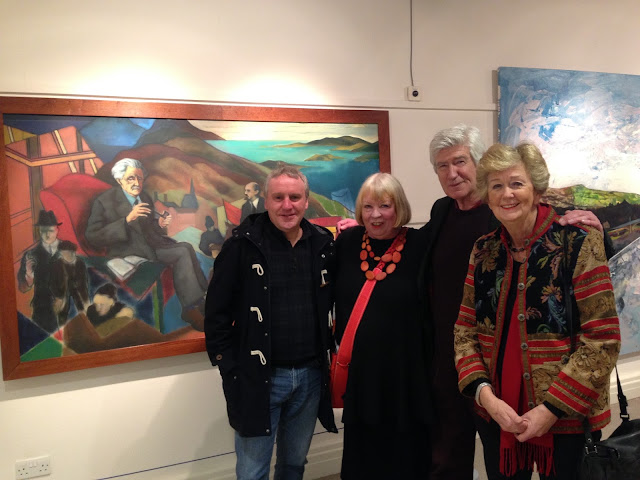 A lifelong supporter of both communism and Scottish nationalism, ever controversial, MacDiarmid is now considered one of the principal forces behind the Scottish Renaissance and has had a lasting impact on Scottish culture and politics. Edwin Morgan once said of him: 'Eccentric and often maddening genius he may be, but MacDiarmid has produced many works which, in the only test possible, go on haunting the mind and memory; casting seeds of insight and surprise. 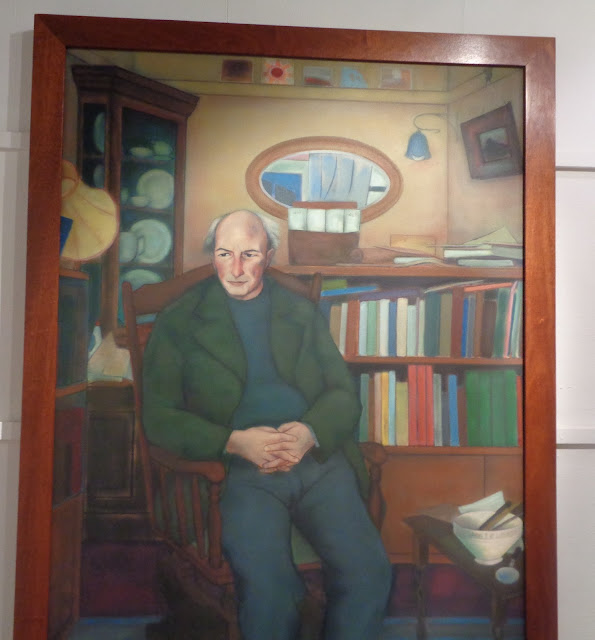 The same can be said of Moffat's poet portraits.  They loiter in the mind, haunting the memory, their unique power emanating from faces well studied, well drawn, the human condition "forced into the centre of one's vision." In 1981 Moffat said he would like people to contemplate his paintings; "to come back again & again." 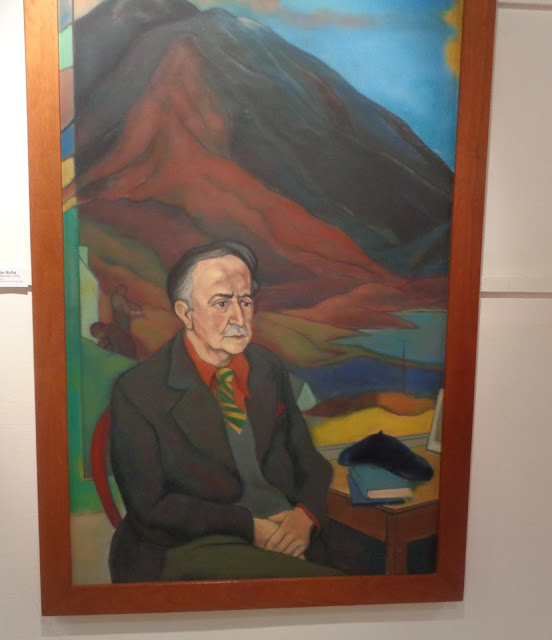 I think he has his wish. 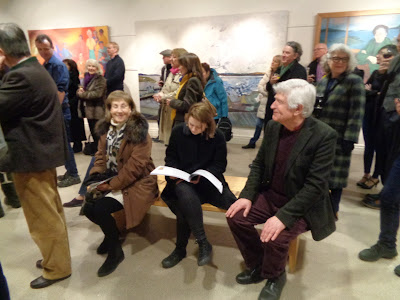