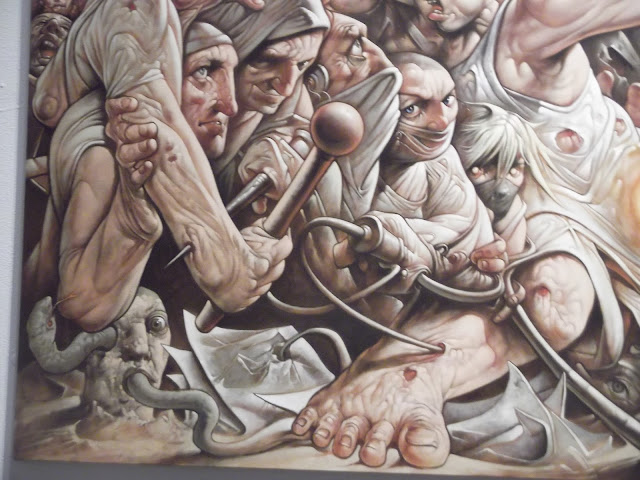 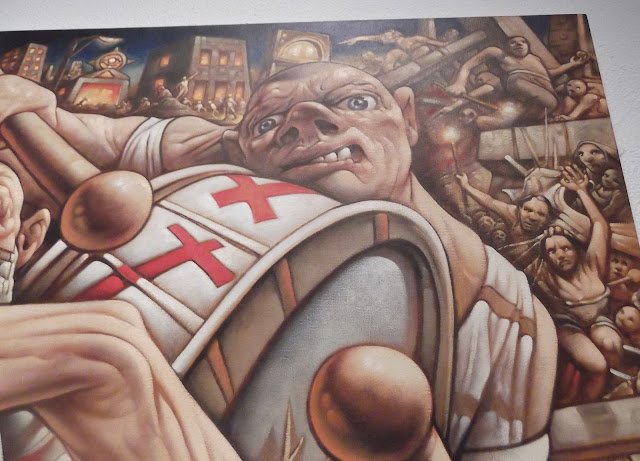 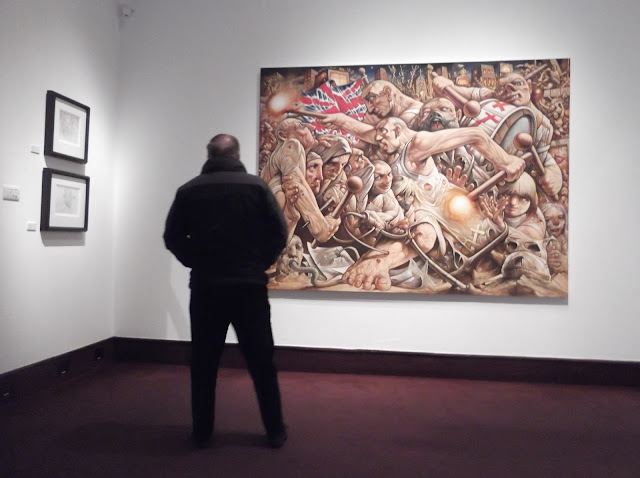 So no surprise that visitors to Babylon, Howson's very large, impressive exhibition at Ayr's Maclaurin Gallery peruse it in silence, whispering as tho in church, gripped by these tough images; searching seriously for some clue to this moral depravity; admiring Howson's amazing technique; his fearless grasp of life & terrible death. 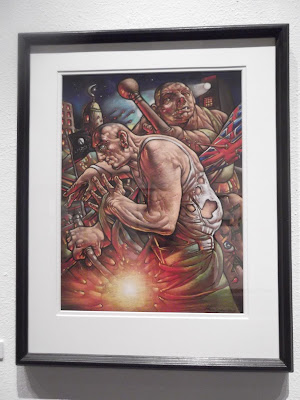 It's now over 30 year since Howson sprung to international fame. He has a big audience of fans for his large scale, dynamic, hard-edged  paintings & incisive pencil drawings. In new work his technique has tightened, his fine line drawings like spiders webs. 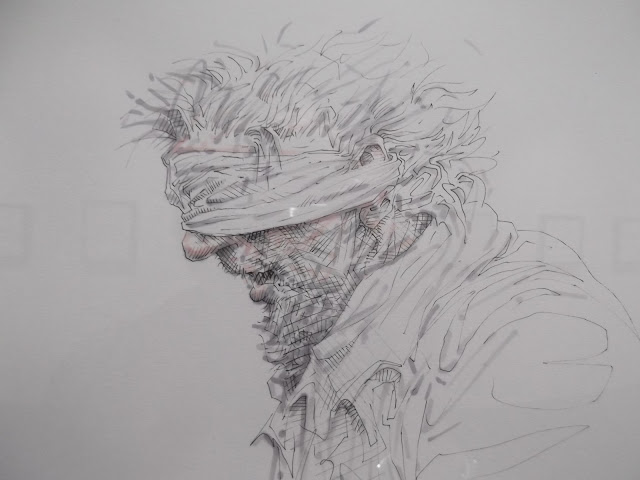 So now, not only is his subject matter disturbing, but his technique too. 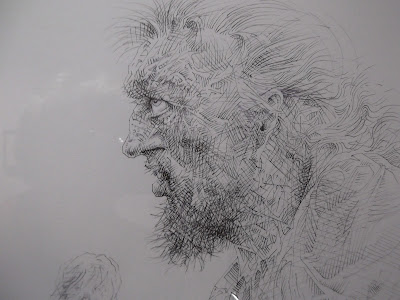 The series of drawings take their strange titles from the Old Testament, Book of Daniel. These, mostly male, figures are often heads in profile with a few angry groups. 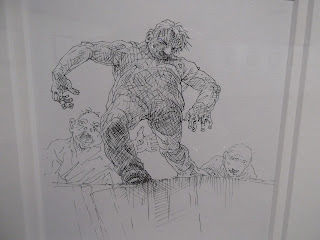 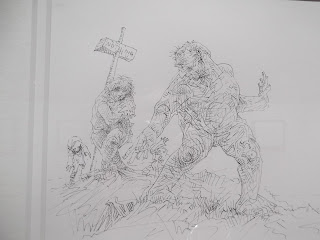 His pictures, highly coloured, emphatic, are  heavily outlined in black around the pastel work. 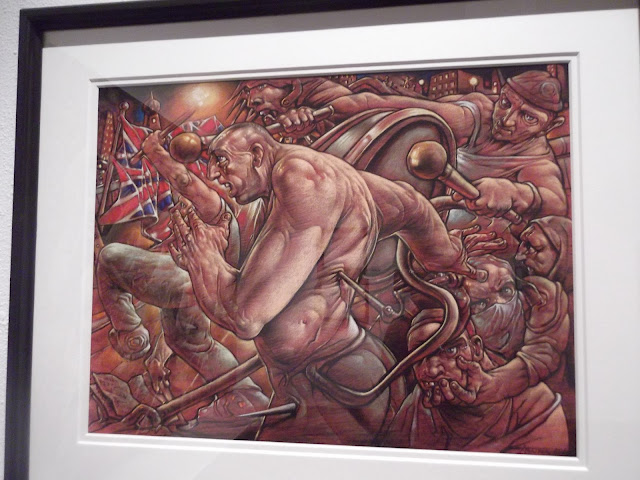 Oils are few, but powerful. 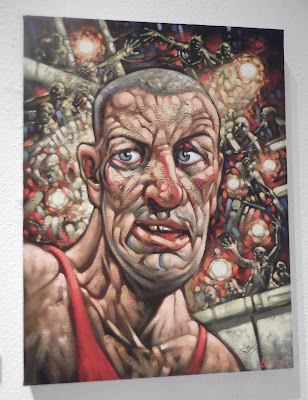 Religion plays its part. Howson was raised in a religious family & the first ever painting he did was a Crucifixion, when he was a kid. Crosses, grave yards & churches are scattered thro-out the big oils. 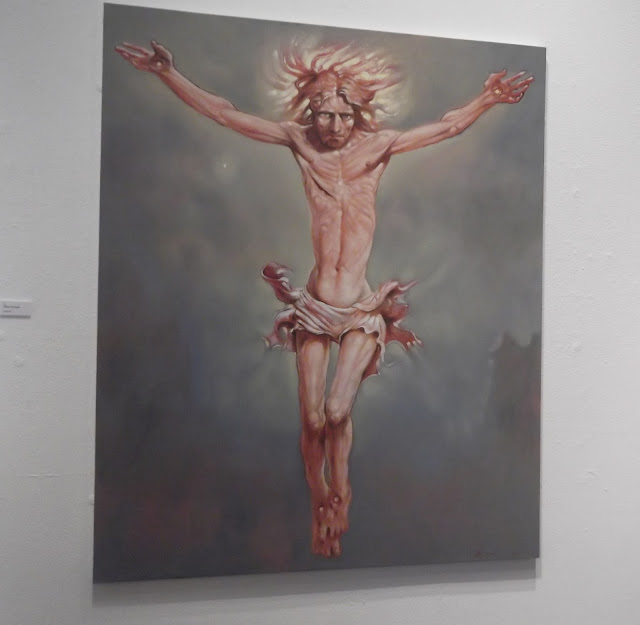 But the 'blind leading the blind' pictures are based on early work from the 1980s/90s when Glasgow's Saracens Head pub provided his models- men down on their luck, wallowing in alcohol & hard crime. Dossers praying for redemption. 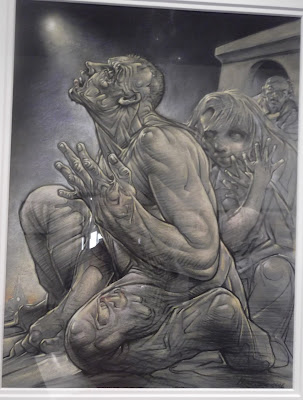 However there are far too many drawings - scattered around in mounts with David Bowie portraits to the fore. 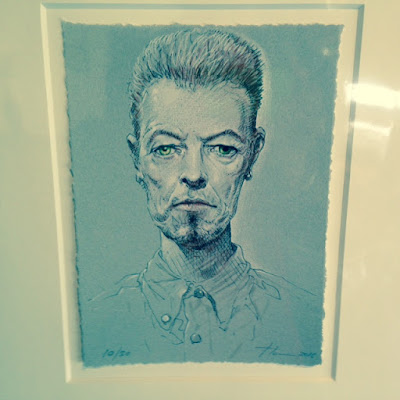 Bowie was a good supporter of Howson buying his work. 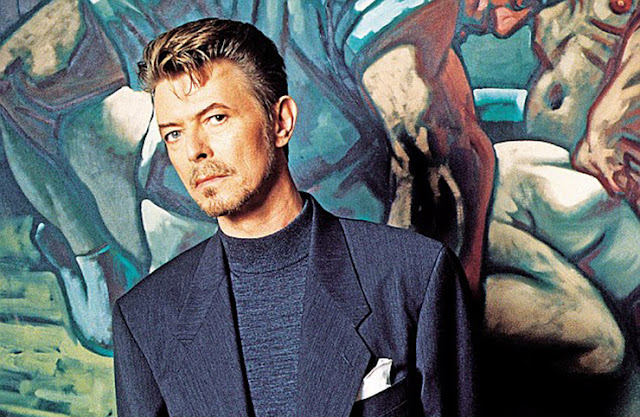 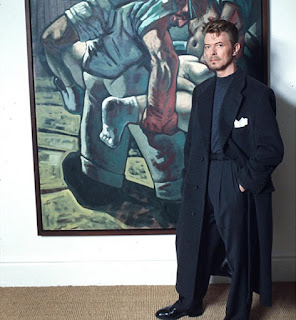 But the drawings are something else. 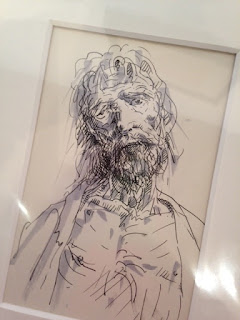 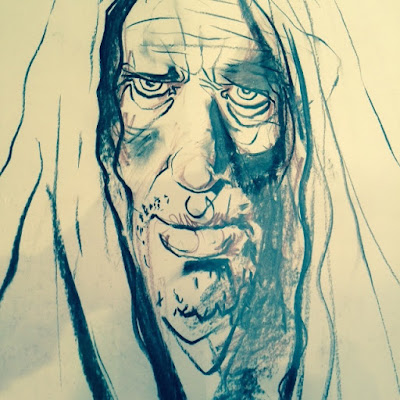 A few, like this big dark expressive head hint at Howson's former power. He can draw like an angel - but maybe not so much!
Howson has made no secret of his mental health problems, & he should be praised for this. His torment is all too evident in many works, and I admire his honesty. 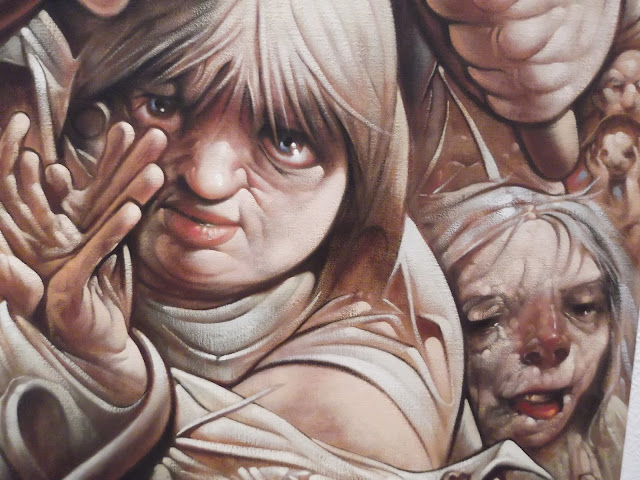 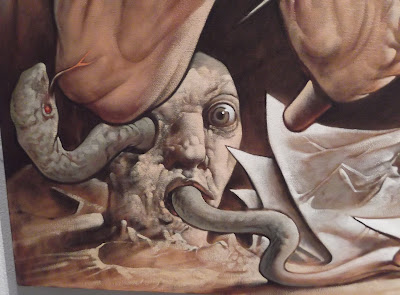 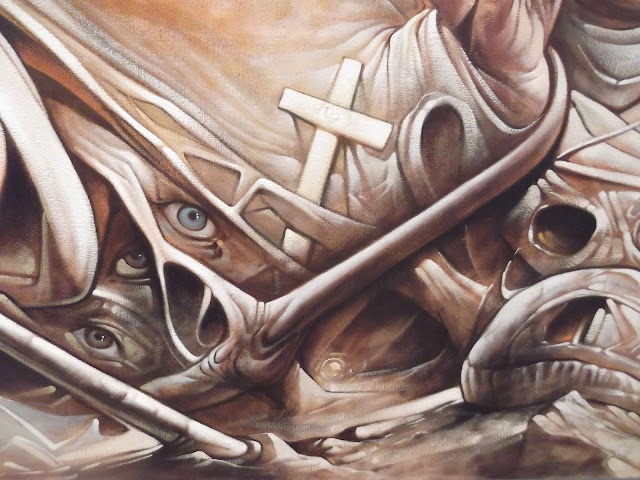 But what to make of this super-realist head - ? 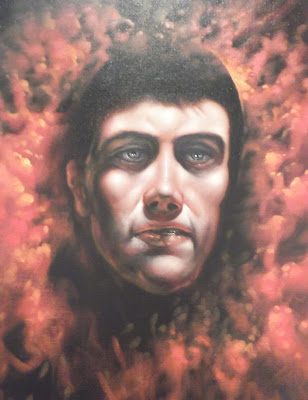 It's a big show but badly needs an editor. Next time a firm grip on what works are shown. The Maclaurin sits in the middle of beautiful Rozelle Park.  Admittance is free.
The Rozelle Mansion was built in 1760 in the style of Robert Adam& was gifted to Ayr in 1968.
In 1976 a generous bequest from Mrs Mary Maclaurin paid for conversion of the coach house & stables into an art gallery. It also helped with ongoing acquisitions of classic & contemporary art.
However govt cuts have really hurt. I used to visit a lot & saw a real fall in basic mainentance,. All the doors and woodwork badly needs painting & gives the place a desolate air.
Sadly this show ends soon. So if u want to see it - hurry!