Inverleith House.
ROYAL BOTANIC GARDEN EDINBURGH
The sudden closure of Inverleith House, the beloved art gallery in Edinburgh, Scotland, has outraged artists and art lovers worldwide and spurred protests. More than 700 people turned out for a demonstration by the gallery earlier this month, and nearly 10,000 so far have signed an online petition. “It’s “unfathomable,” said Turner prize–winner Douglas Gordon, “the most myopic decision that any forward-thinking administration could possibly make. Bang goes the Enlightenment–roll on the Dark Ages!”
After almost 60 years as a beautiful home to contemporary art, the gallery was axed on Sunday, October 23, with no public consultation or forewarning.
Built in 1774, Inverleith House, a historic listed mansion, sits at the heart of the Royal Botanic Garden. It opened in 1960 as home to the Scottish National Gallery of Modern Art, showing such modern artists as Picasso, Matisse, Miró, and Henry Moore. Then, in 1986, after the National Gallery moved to a new home, the building became a center for international contemporary art.

Installation view of Tony Conrad’s 2014 show at Inverleith House.
ROYAL BOTANIC GARDEN EDINBURGH
In the 30 years since, it has presented major exhibitions by a roster of artists ranging from Agnes Martin, James Turrell, and Andy Goldsworthy to Damien Hirst, Carl Andre, Roni Horn, and Martin Creed. It has exhibited more Turner prizewinners than any U.K. gallery apart from the Tate. With its perfectly proportioned light-infused Georgian rooms, Inverleith is unique.
The Royal Botanic Garden Edinburgh, RBGE, and Inverleith House are public assets directly funded by the Scottish Government and Creative Scotland. Inverleith House received National Lottery funding in 2003 for building upgrades plus £80,000 ($97,520) from Creative Scotland to cover project funding in 2016–17, but, significantly, Creative Scotland turned down Inverleith’s bid for three-year funding.
The gallery’s director, Paul Nesbitt, had only one assistant. Total funding over the course of 22 years since 1994 was a paltry £1.5 million ($1.8 million), yet on this shoestring, Nesbitt created a world-class program that embraced leading contemporary artists from the U.K. and abroad.
Among the cacophony of protests from artists, curators, and directors alike comes a depressing prophecy from artist and filmmaker Luke Fowler, who suspects a “wedding venue” in the offing.

Installation view of Joan Mitchell’s 2010 show at Inverleith House.
ANDREW RUSSETH
Painter Adrian Wiszniewski told me, “Inverleith House has hosted some of the most exciting, stimulating exhibitions in Scotland with a unique venue within an extraordinary setting. To lose it is cultural vandalism.” And painter Callum Innes lamented, “In effect it’s such a small amount of money and such a great loss. Inverleith provides quite a different experience to any white-box gallery. People visiting the garden come across the house; it’s not intimidating, it’s almost a domestic space. They get a genuine, memorable experience.”
As George Kerevan MP, ex-Councilor for the City of Edinburgh, described it,”Inverleith House is a perfect exhibition space. Where else can you find an outstanding 18th-century house, beautifully restored, set in one of the world’s great botanic gardens, hosting groundbreaking exhibitions? What will happen to it now? Offices? Storage? Likely it will no longer be accessible to the public. Edinburgh’s great Sunday tradition—a visit to the Botanic Garden and the current exhibition at Inverleith House—will be lost to us.”
Speaking of his own career, Tom Eccles, a Glasgow University graduate who is now executive director of the Center for Curatorial Studies at Bard College and curator at New York’s Park Avenue Armory, pointed out that “today, so many galleries are anonymous spaces. To lose one of the most intimate, the dream of walking into a house full of art, is a tragedy. I would not be where I am without Inverleith House—neither my career in art nor my love of gardens.”
Artist and arts promoter Richard Demarco told me, “Inverleith is a well-nigh perfect example of a building expressing the principles of the spirit of the Scottish Enlightenment. Such a building should continue welcoming all those whose lives are enriched by the visual arts.”

Franz West and Heimo Zobernig, Bateau Imaginaire, 2004/13.
COURTESY ROYAL BOTANIC GARDEN EDINBURGH
What happens next? So far the Garden’s Board of Trustees has remained silent, but its members are now faced with tough questions. Simon Milne, regius keeper at the garden, defended the decision: “Like most public bodies we are under increasing financial pressure. We looked at the budget and concluded we were not prepared to continue the risk of underpinning the art gallery at the expense of our core programs of botany and horticulture.”
But Joyce McMillan, a columnist for the Scotsman, who started the “Save Inverleith House” campaign, takes strong issue with that view. “The RBGE should reverse this decision,” she writes. “It’s impossible to imagine a more appropriate use for this exquisite iconic building. The amount of public money invested in Inverleith House as a gallery over the years raises questions about whether the RBG management have any moral right to close it to the public.
She smells “a typical managerialist maneuver, designed to turn a beloved public space into a lucrative private asset” and suspects they’ve had a very good offer for the house from some commercial operator. Hence, their “unseemly haste.”
Finally, in an emergency motion, the City of Edinburgh Council Culture & Sport Committee voted unanimously to look at the issue. There are appeals to RBGE to immediately publish a recent Creative Scotland–funded feasibility study on its future. U.K. Culture Secretary Fiona Hyslop tweeted today, “Sharing concerns re Inverleith House, I plan to meet with Chairs/CEOs of RGBE and Creative Scotland to seek way forward.” Let’s hope the outcome is positive. 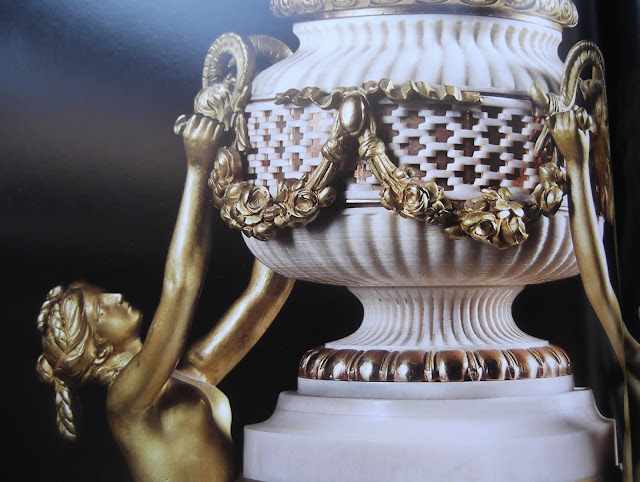 Bling did not begin yesterday! The French Court of pre-Revolutionary times, Louis 16th, Marie Antoinette & Louis XV's mistress Madame Du Barry, were all enamoured of bling - but in this case of such beauty and exquisite detail, such ravishing design & fine texture as to make doorknobs, firedogs, wall lights and vases breathtaking! 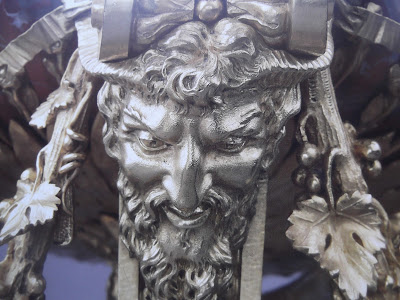 These superb and opulent creations were made by master chaser-gilder PIERRE GOUTHIERE around 1760-1800 and 21 of his finest masterpieces are on show at the FRICK, New York till February 19th. 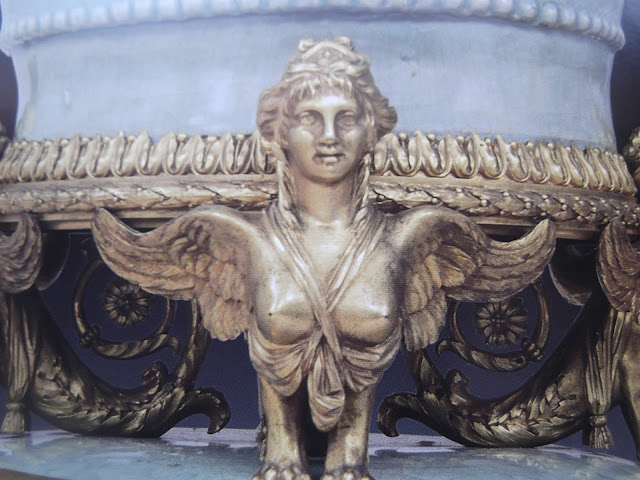 Despite being regarded as one of the greatest French artists of the 18th century, this is the first ever exhibition devoted to him. It has a big & excellent catalogue full of detail - about the technique, the history, his workshop, his clients. 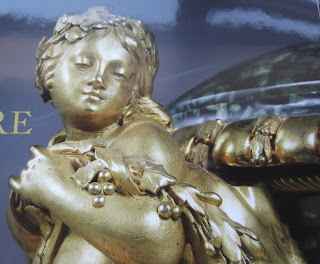 There is also a helpful video demonstrating the processes used to make such complex gilt bronze embellishments. 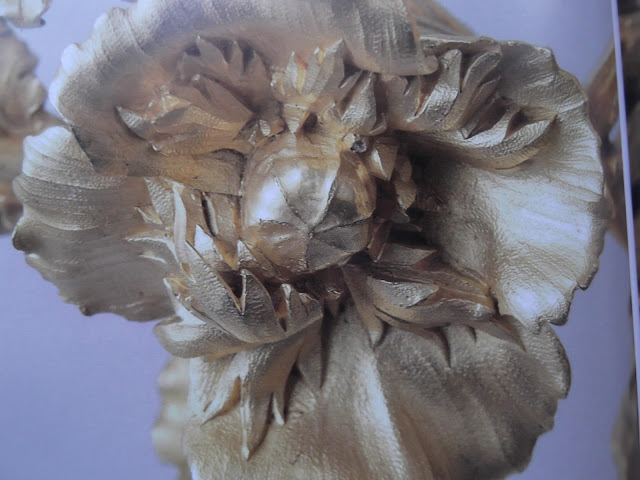 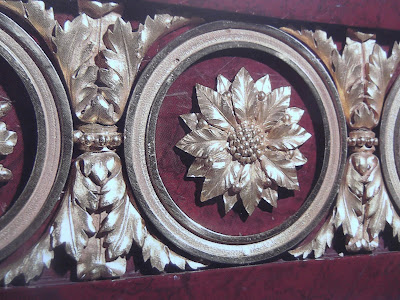 I am no scholar of this period, but it just requires a pair of eyes ready to focus on each and every fascinating detail. 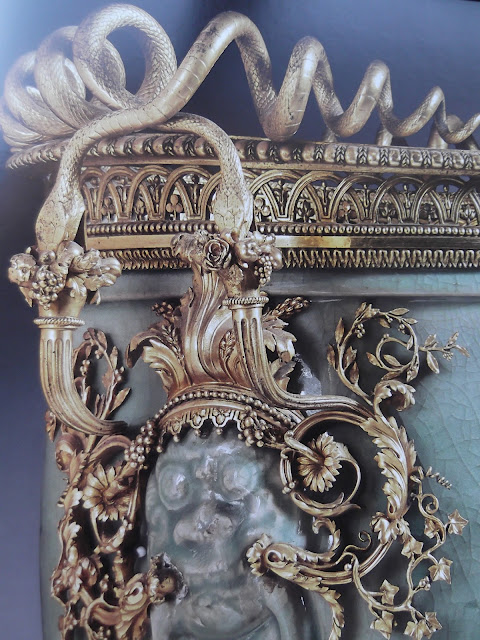 The complex process required designer, sculptor, modeler, mold maker, caster, turner, chaser, and gilder. He could do all!  He was admitted to the Guild as a master chaser & gilder in 1758 aged 26. 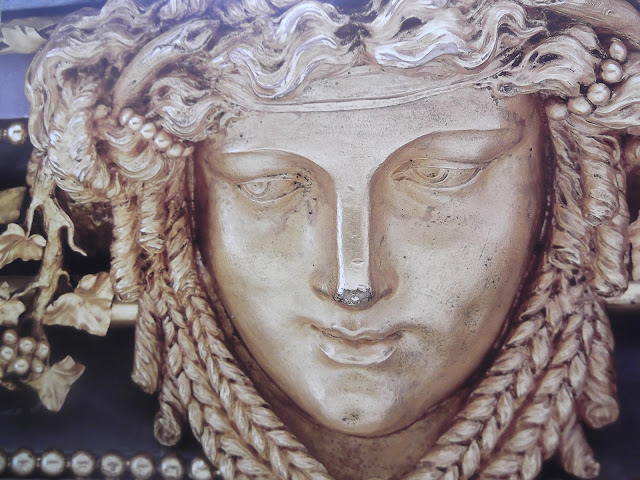 He used a method of sand casting which is elaborate & painstaking. Strangely he did not use the lost wax method. 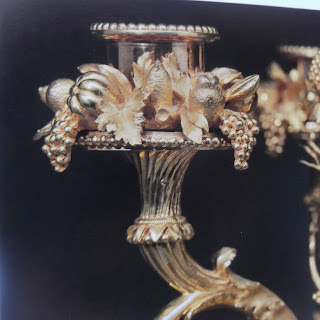 Gouthiere had many tools at his disposal to use on the delicate surface of gilt-brass to create his legendary imitation of fur, or horn or flesh. His prices were huge - even more than famous French portrait painters of the era! 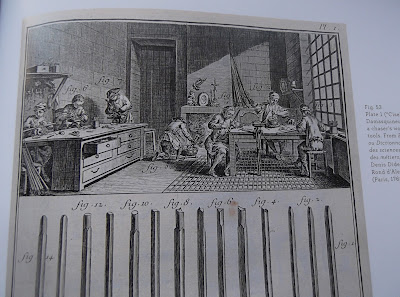 His workshop
The video demonstrates these processes. Revealingly there is now no one person who can do this; the Frick had to find craftsmen in Amsterdam & Paris. It is nearly a lost art! 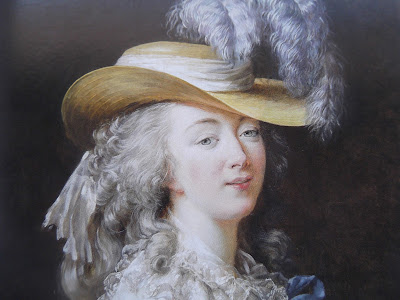 Madame Du Barry
And his work was very popular with his wealthy important clients.
Despite this he messed up financially. He forgot to send out bills. Then he decided to build a huge & lavish mansion. 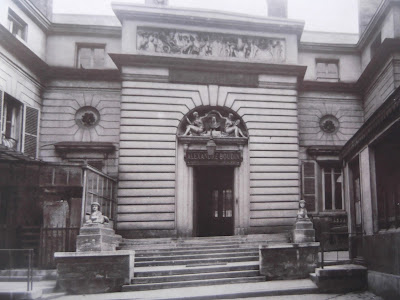 Key clients like the Duke of Aumont & Duchess of Mazarin died without paying their enormous debts and he died in poverty in 1813. 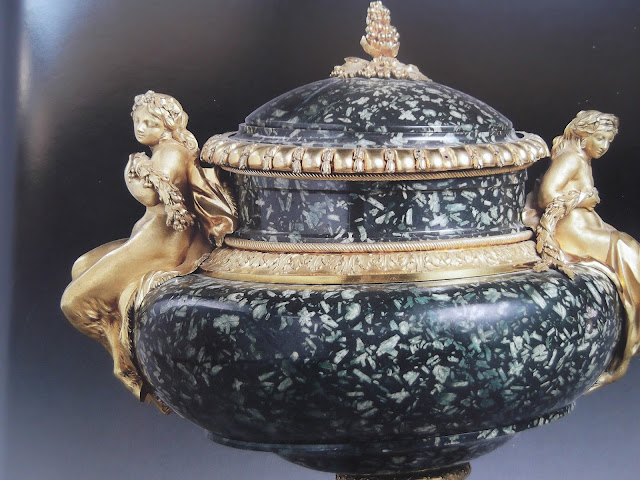 A tragic end to a brilliant 30 year career creating some of the most exceptional, extravagant, exuberant and truly beautiful gilded gilt-bronze decorative objects. 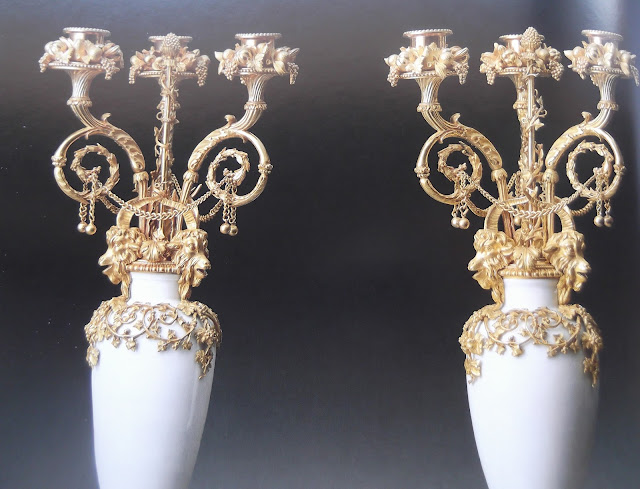 The show goes to Paris in the Spring. 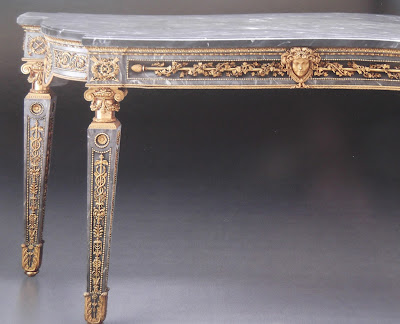 This famous side table which belongs to the Frick will not go to Paris as Mr Frick, like Mr Burrell, forbade his collection to travel. 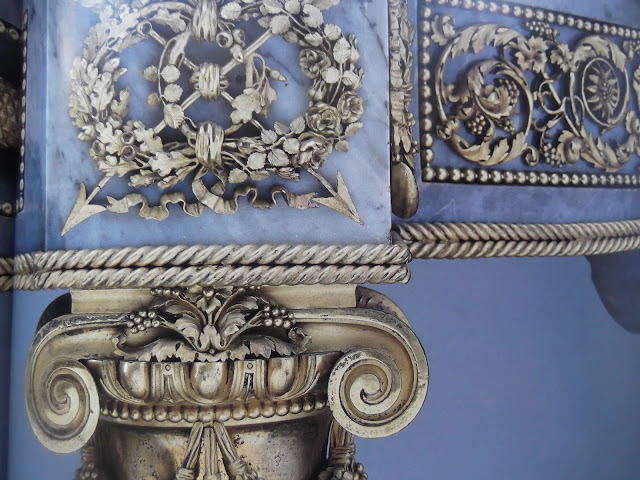 A truly exceptional show. SEE IT IF U POSSIBLY CAN.