Wonderful to report on several BEAUTIFUL shows in Chelsea NY right now. Not often this happens. More about the weird ones later! 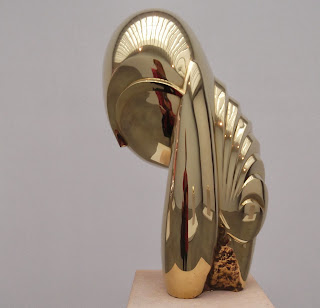 Paul, (son of Kasmin who first showed Hockney in London,) has an elegant new space, perfect for Bruncusi's 5 world masterpieces. Most famous is Madame Pogany, a polished bronze serpentine of feminine allure, while the ovoid Head epitomises his saying, "Simplicity is complexity resolved." 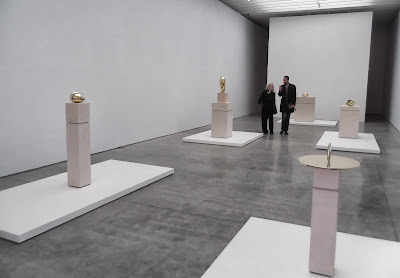 Brancusi exhibited in the iconic 1913 Armory show, (see my piece Oct 27) which resulted in his first ever solo show - in NY in 1914. Amazingly 90% of Brancusi's work was sold in the US. In 1955 Brancusi himself said, "Without the Americans I would not have been able to produce all this or even to have existed."
This Romanian artist, who lived in Paris, preferring to photograph all his work himself, (Man Ray taught him how,) and the show contains 6 of his own B&W pix.

In the early 1950s my husband went to visit Brancusi in his studio in Paris, to see these pure, minimal sculptures which, the artist maintained, were not abstract, but captured the very essence of the thing portrayed. Later he sold several Brancusi pieces including an Endless Column and a white marble head, to museums.
As Paul says, ...he is the most modern of modern sculptors, and his influence reverberates today. Dan Flavin even dedicated works to Brancusi. 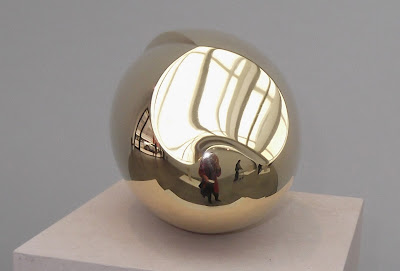 Round the corner, after a delicious lunch at Hotel Americano, we saw Kasmin's other exhibition, poles apart but equally fascinating - a wonderful display of Arman's hoard of African Art.

Arman, the artist, was a voracious collector, at one point having over 400 pieces of African art from Congo, Ivory Coast, Sierra Leone, Nigeria, Gabon & Tanzania.  He also collected other things - from expensive Japanese armour to cheap hardware knobs and nails - using objects large and small to create his own distinctive assemblages. 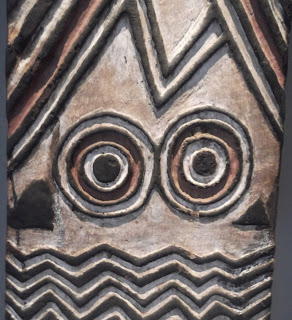 Arman revered these tribal artifacts which hold such magic for their creators - far far from 'primitive', more significant than much of today's art. Some were collected for their formal beauty, others for their potent alchemy. Some are elaborate & patterned, others frightening in their intensity, while one wooden elongated Face Mask from the Fang tribe of south Cameroun could surely have inspired Brancusi! 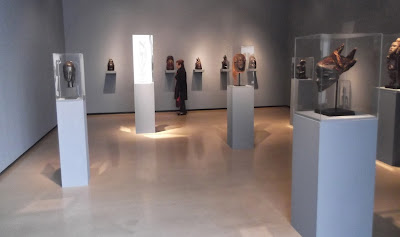 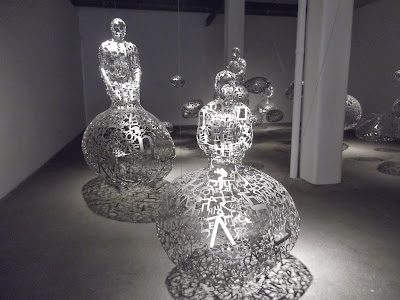 Spanish. Age 58. International artist who re-imagines the human figure in inventive ways. Here he uses the world's various alphabets - literally - to create his suspended stainless steel people who embody universality rather than differences. We all know dialogue is important, and see what happens in Syria or Egypt when it fails. Here words literally provide the structure. In a dark space the sculptures  shimmer, lit as in a theatre setting. I was less impressed by his white cast paper heads.

Plensa is big on public sculpture & here his giant heads look superb - in a NY park, on a beach or in a Parisian square. Next year Chicago. www.galerielelong.com 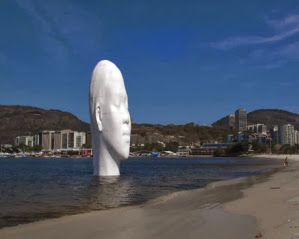