She is young, beautiful, vulnerable. Silhouetted against a plain black background, she looks you in the eye. With the exception of one large, lustrous earring, she lacks decoration, and yet you are captured, mesmerized. The image is so simple, but it has been captivating viewers for 350 years. 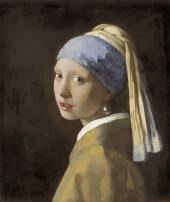 We do not even know her name, but such is her fame, (and long before the recent film) that Vermeer's Girl with a Pearl Earring 1665 has been given a room all to herself at NY's Frick.  There are only 36 Vermeer pictures in the world, 3 of them belong to the Frick and 12 are in the USA. In 1880 Girl with a Pearl was bought for 1 dollar and gifted to Holland's Royal Picture Gallery Mauritshuis in The Hague, but is in NY on loan till January 19th. 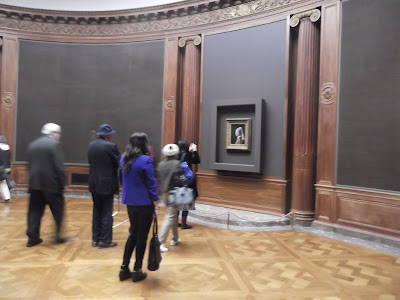 Eight of Vermeer's oils have pearls - ironically there has never ever been a pearl this size!  Exaggeration is nothing new. Frick bought his 3 Vermeers between 1901 and 1919. Mistress & Maid 1666 also has a pearl but here worn by a lady in sumptuous silks, satin and fur. Frick had to pay rather more than a dollar. 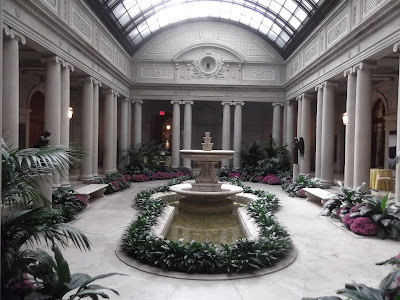 Girl with a Pearl is 1 of 15 pix on loan from the Mauritshuis. All are from the Dutch golden age & include 4 Rembrandts, 2 Hals portraits and a sweeping landscape by Ruisdael. But you don't want to hear about these I know - just the Girl! And if she inveigles u into the Frick she has done u a favour, because the Frick, the 5th Ave mansion home of its founder, industrialist billionaire Henry Clay Frick, is one of Manhattan's jewels, awash with masterpieces by Titian, Goya, Constable, El Greco, Holbein et al.


I wrote about Vermeer for the Ft in 2001 when 15 of this self-taught artist's spectacular oils were at the Met. "Worth crawling over hot coals to see," I wrote then.
I also posted my blog about this show on Halloween. So with all those spirits, goblins & witches about, no surprise that the whole thing disappeared into thin air.  So here it is again, in a new version. Moral? Always have a hard copy & a back up. Or like one friend, a backup of a backup! 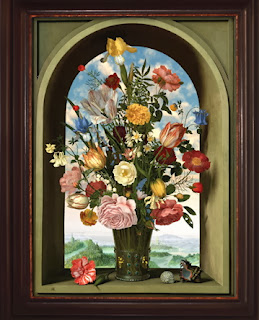 In London they had Van Gogh's Sunflowers cast in bronze via 3D printing, a decomposing frog and Giorgione's Sleeping nude Venus. Amazing. 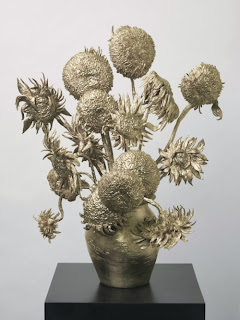