IN THE AIR: T J WILCOX's PANORAMA at the WHITNEY 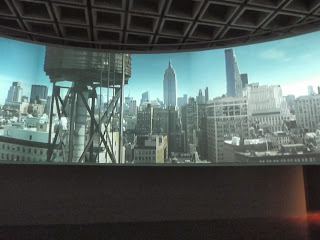 New York. New York. We never tire of it. Crowded, noisy, dirty, too hot, too humid, too cold, yet always invigorating, always glamourous. This week has been all blue sky and gorgeous: what's called "severe clear"... Perfect for T J Wilcox who spent many cloudy, rainy, misty days trying to film a new fashioned 360 degree video panorama of New York City from the top of his building at the corner of Union Square. "We filmed many times without success. Half way thro' it would rain."

Ten projectors with special lenses now compresses a 24 hour day/night into 30 minutes. It's enthralling. The huge 7ft high x35ft across circular screen hangs in space. U can duck under and into it. The light changes, tower block shadows fall across smaller buildings, at dusk windows twinkle on the Empire State, the new Freedom Tower replacing the World Trade Centre, and the wedge shape City Corps building, (we got married in St Peter's church underneath it - only in NY can they sell the air rights to a church!) It's mesmerising.

Every so often the skyline is punctuated by short 3 min stories which relates to NY - 1930s archival black & white film shot from the air; Gloria Vanderbilt; an account of 9/11 seen from the roof; Warhol's launch of a giant silver phallic ballon just as the Pope passed by his Factory!

Curated by Brit,  Chrissie Iles, it's a great immersive installation - one people will love.
www.whitney.org http://whitney.org 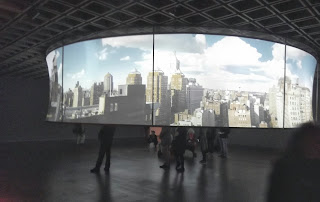 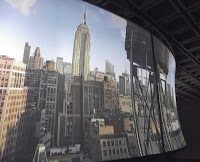