This huge one block square 1880s historic building had been grossly neglected for many years. Used for Art Fairs embellished with Picassos and 6 ft high floral arrangements it looked OK till u went to leave yr coat. In the cloakrooms the plaster peeled, leaks leaked and damp & dust covered the walls.


Named among the World's 100 Most Endangered Sites, by 2007 this central NYC edifice was being transformed via a $200m "revitalization." Already the vast 55,000 sq ft central hall has seen multimedia art events by Ann Hamilton, Boltanski & a memorable huge video environment by Ikeda, (Japanese artist not Ikea!) plus Merce Cunningham Dance, NY Philharmonic, next comes The Life & Death of Marina Abramovic,  http://www.marinaabramovicinstitute.org, premiered at Manchester's Festival 2011, and Kenneth Branagh's staging of Macbeth.
I wish there was more art and less performance but given the size of the space... see my big piece on the Armory in State magazine www.state-media.com for 2011. 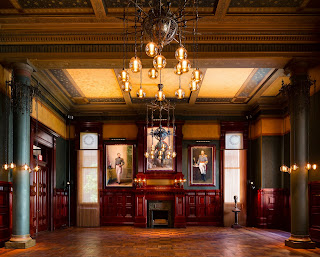 http://armoryonpark.org
This week a 15 million dollar gift has restored one of the famous American Aesthetic style period rooms, which will be used for recitals, and maybe art installations. (The Tiffany room is already done.)  For Europeans it's not much to shout about but in the US it's architecturally important. With its 19th century proportions, the room has great acoustics - proved on Thursday by the wonderful award winning Lauren Flanigan who sang newly discovered Kurt Weill songs. She has performed with the Met Opera, La Scala & Glyndebourne etc etc & can do jazz, opera and anything u care to name.  I don't even like opera - but she was entrancing. 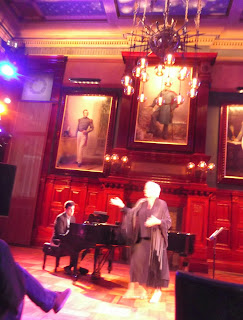