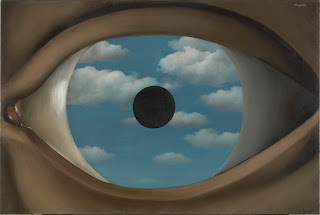 Magritte's mysterious, unsettling signature Surrealist images are very well known today: ordinary objects - curtains, bowler hats, clouds, mirrors, nudes, that infamous pipe - painted in deadpan style. But do we understand them any better than when they appeared almost 100 years ago?

Magritte would hope not! What does it mean? "It doesn't mean anything, because mystery means nothing either, it is unknowable,"he said. But he also wanted to make "everyday objects shriek out loud."

This major show of 80 works focuses on a mere 12 years, 1926-38, when he worked flat out in his hometown, Brussels and Paris, the centre of Surrealism, creating his most radical work. It was all produced in a modest working class house with no studio. Despite help from his wife's father, the couple lived on the bread line. So in 1930 Magritte returned to commercial art work, until 1937 when an eccentric British patron commissioned paintings, including one here. This portrait shows a man looking at himself in a mirror, but instead of his face we see, again, the back of his head.

Loans come from Japan, Edinburgh, Paris, Berlin, the Tate, Jasper Johns, plus Chicago and Houston where the show goes next year. www.moma.org 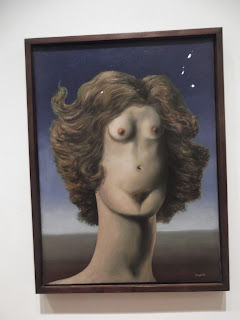