As a rider who owned 2 horses I know when an equine sculpture/painting/drawing is wrong! Happily altho' he never rode, ANDY SCOTT has conquered this market in a big way. 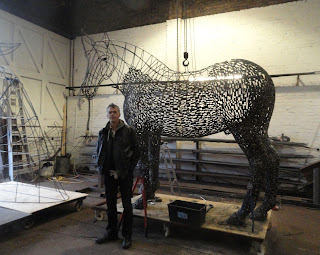 His KELPIES  www.thekelpies.co.uk, are now world famous, with upwards of 2 million visitors to the Helix Park near Falkirk/Grangemouth, millions of words written about them, & countless images of them flashing across TV screens/posters & advertising world wide. Even Edinburgh has adopted them for Princes St! And how many selfies have they spawned?! Irresistible. 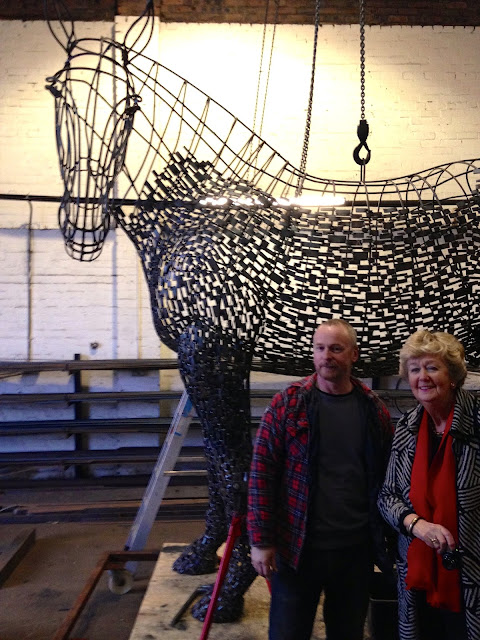 It all began in 1997 with the Heavy Horse, commissioned  as a gateway marker on the M8 by Glasgow Business Park. This industrial park was opened by the beloved Donald Dewar MP and I was lucky enough to go to it with him. One glance at the Clydesdale, & we were both  hooked. 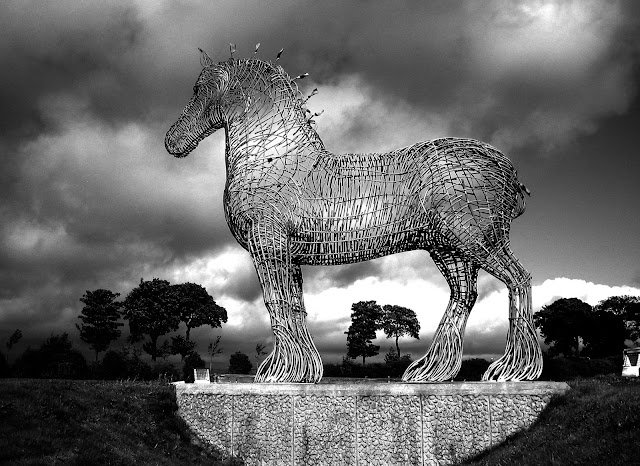 His opening speech was unusually enthusiastic. Beaming & upbeat, Dewar, like so many after him, fell in love with Andy's metal horse. 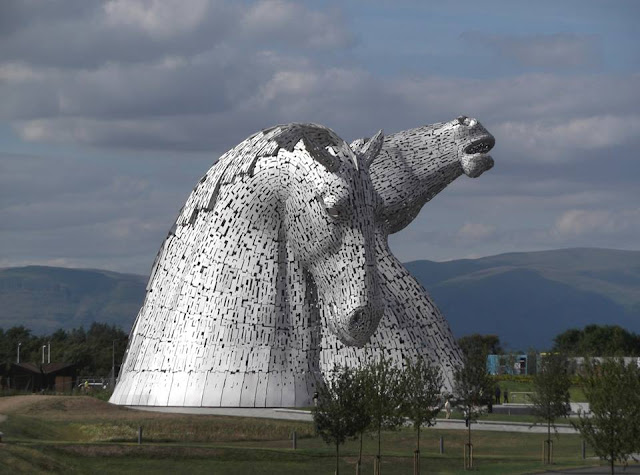 This first foray with horse as muse, was a linear drawing in space. Wire, bent by hand, curved in all directions, over hoof & rump, nose & fetlock. Perfect. It is still one of my favourites. 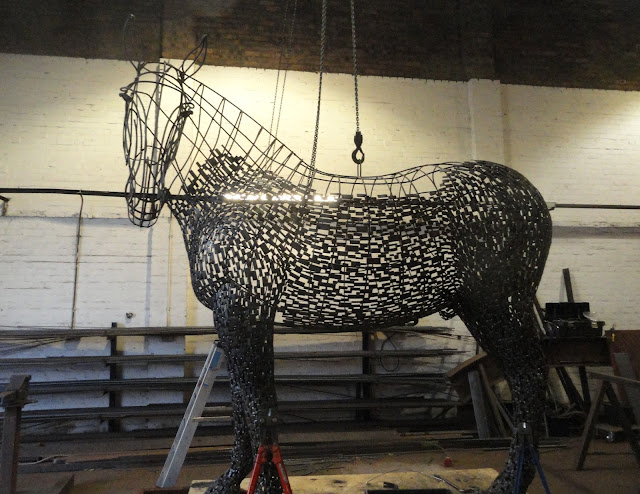 Twenty years on Scott is still wedded to his horses. Working in his huge shed in Maryhill, his 'theatre of dreams',  he creates:  a beautiful silver herd to gallop across an American Long Island foreshore,  - 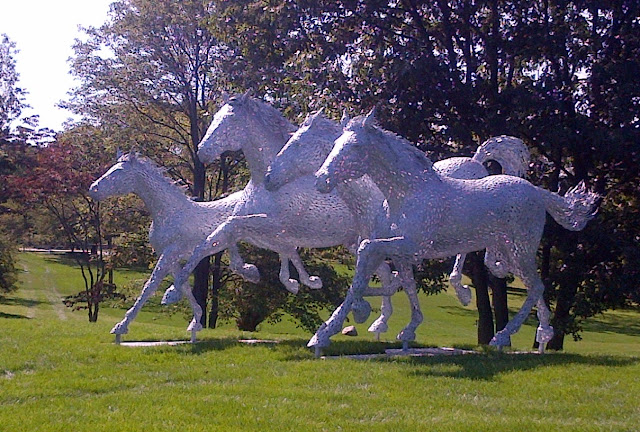 another Equus Altus, a ton & a half of steel, balanced on a 1ft square column 50 ft up, in a Leeds shopping mall. "That was a nerve-wracking installation!" he says. 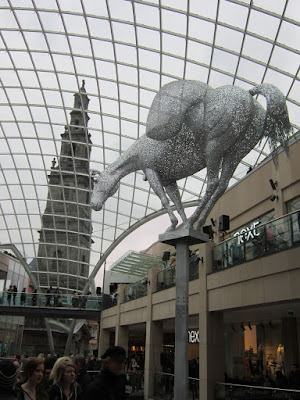 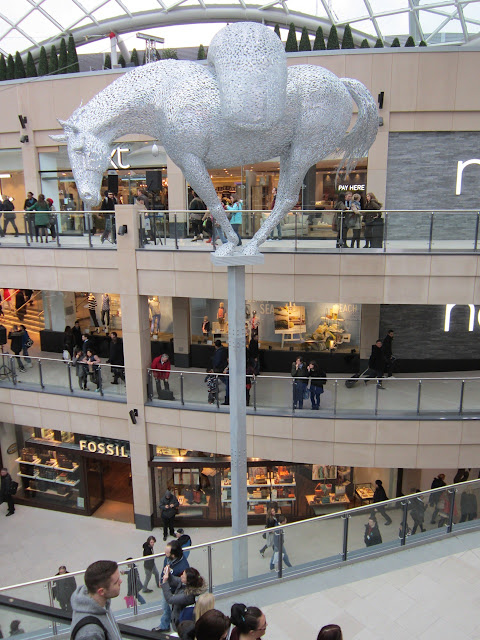 He and his wife Hanneke (who is also an architect) have also produced a superb & wonderful BOOK telling the complex story of their 8+ year journey with the Kelpies. It is by far one of the best, most beautiful books ever, recording a gripping story with fantastic photography, fascinating interviews & compelling layout. A masterpiece in itself.

Scott is currently working on several large scale projects in Maryhill, & will have a show in NEW YORK in the Spring. It will be at Glasgow Caledonian University's building  on Wooster Street, Soho: a series of bronzes, photographic prints & he hopes, a medium scale steel piece. 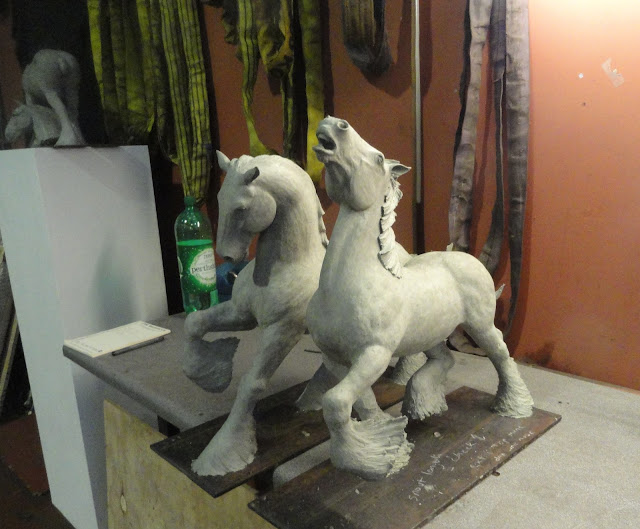 He explains, "The loose concept is maquettes for larger scale works, some which came to fruition, some which never saw the full scale light of day. GCU just gave me an Honorary Doctorate. I'm pleased to say part of the gig is this wonderful opportunity in June. I must admit I am enjoying the challenge of re-acquainting myself with clay and skills I'd forgotten I had after years of steelwork." 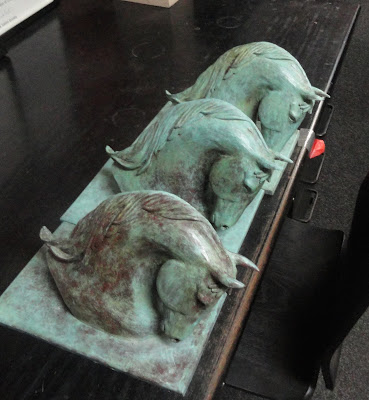 His recent steelwork now involves a more abstract skin of rectangular pieces soldered, mosaic-like, over the initial skeleton of wire ribs - which are removed at the very end. His current commission is a secret! But if this new lovely horse - which has a kind face, pricked up ears & alert expression - brings as much joy as his previous animals, the owner should be well pleased. 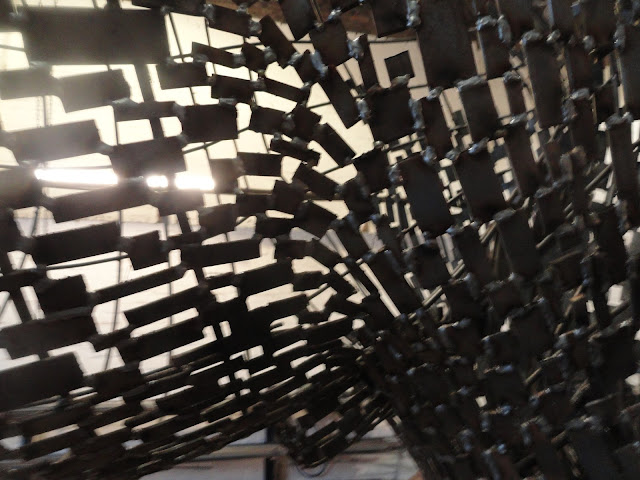 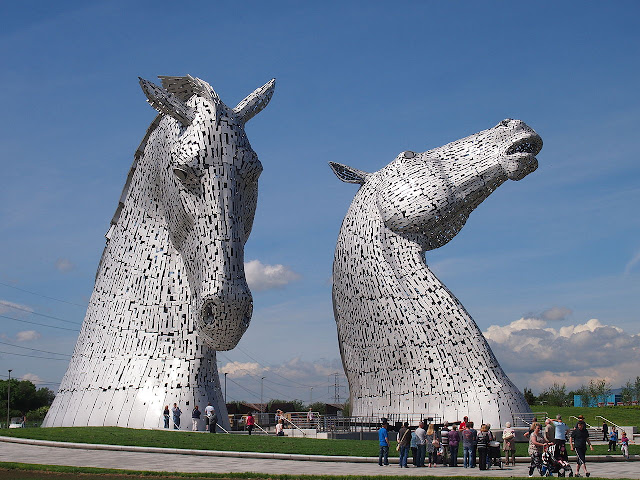