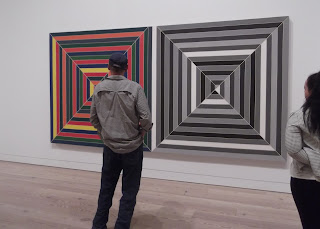 I had been a fan ever since I first met Frank Stella at Edinburgh's Dovecot Studios back in 1985 -when he was working on the Pepsi Cola tapestries. (They were based on this black & white image) 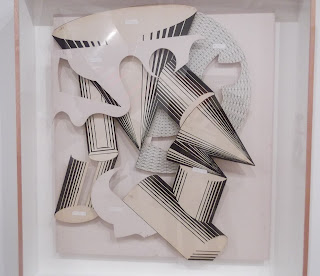 Stella was famous for his geometric Day-glo pictures, - 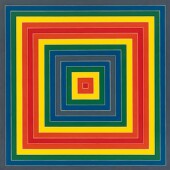 So I was looking forward to seeing his major retrospective at the new Whitney in Manhattan. 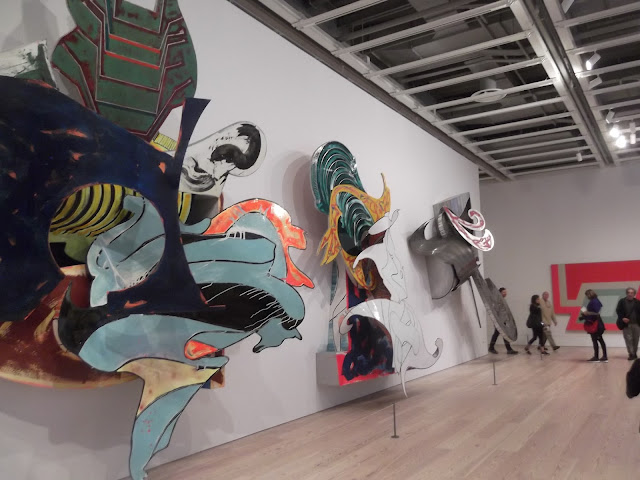 But I was not prepared for its extravagance, its ebullience, vivid colour & dynamic energy, its total joie de vivre! What a delight to wander shell-shocked among over 100 works from almost 60 years. 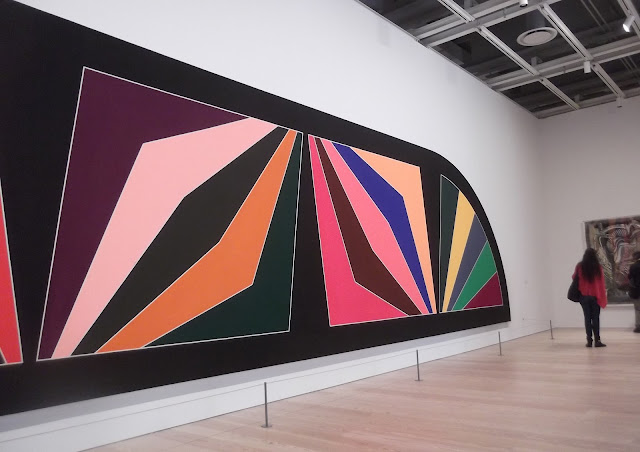 For once not chronological or academic in display, & ranging from 1959 to today, huge paintings & giant 3D structures rampage across the entire 18,000 sq feet 5th floor gallery from window to window, Hudson River to High Line.  It is an invigorating sight. 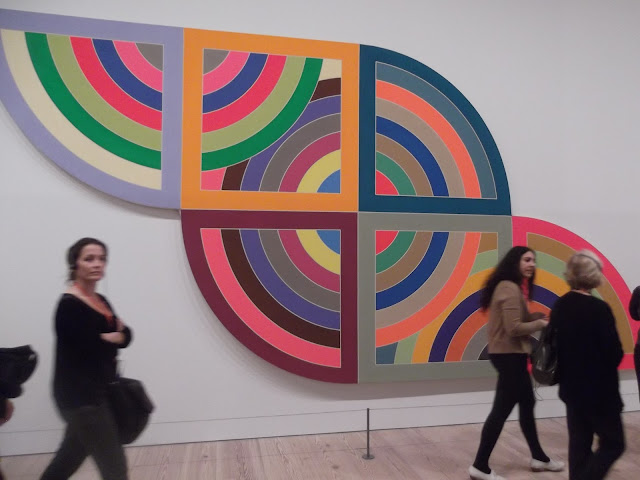 Stella maintains he's a painter but many, maybe most, of the works on show are so 3 dimensional as to be almost sculptures. 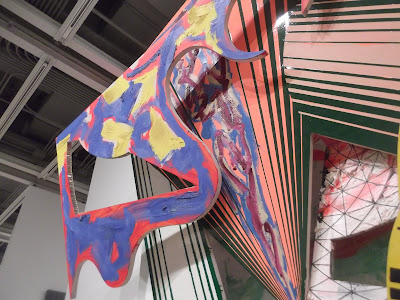 What started out as collage ends up as cut steel and aluminium - huge sheets curved and bent into baroque flying shapes which protrude from every surface. 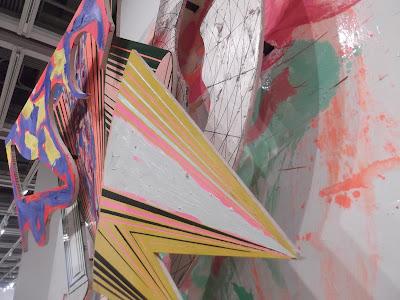 Diversity is the name of Stella's game. 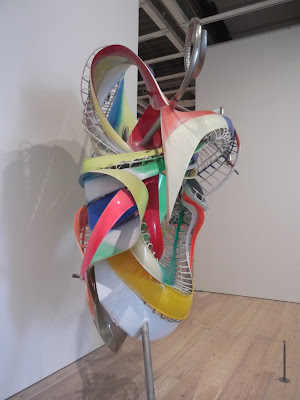 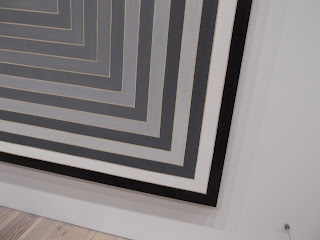 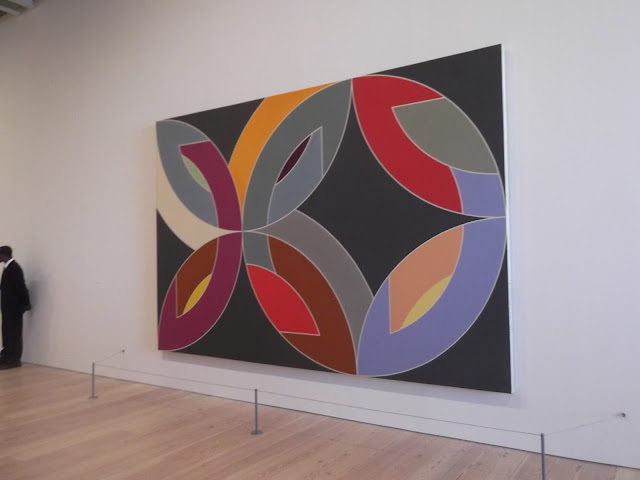 Or as my friend David Ebony puts it, "Frank Stella burst onto the New York art scene in the late 1950s. 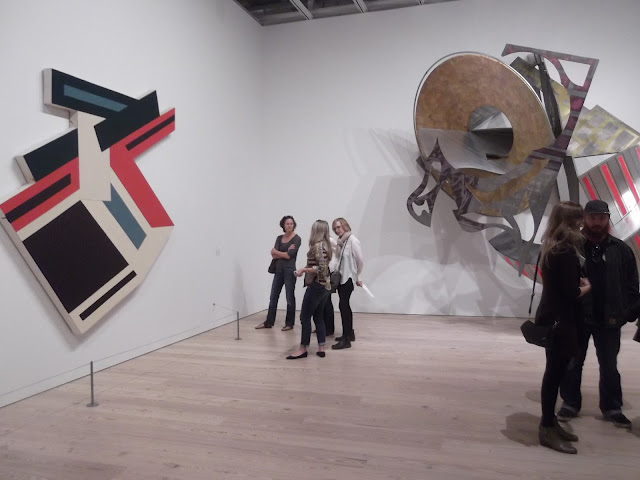 Barely 23, he held his first solo show in 1960. It is something of an understatement to say that the exhibition caused a stir." 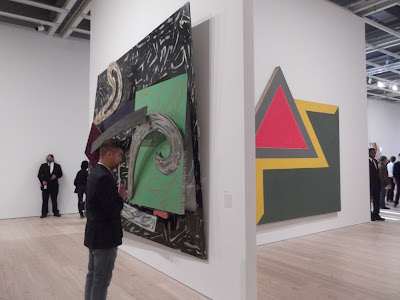 A second retrospective was held at MoMA in 1987. This is the first career survey since then! 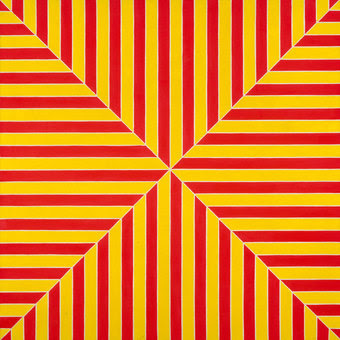 It includes the famous Black Paintings plus red stripes. These pix executed with enamel house paint were a critical step in the transition from Abstract Expressionism to Minimalism.
A selection of the artist’s Aluminum and Copper Paintings of 1960–61, featuring metallic paint and shaped canvases, further establish Stella’s key role in the development of American Minimalism. 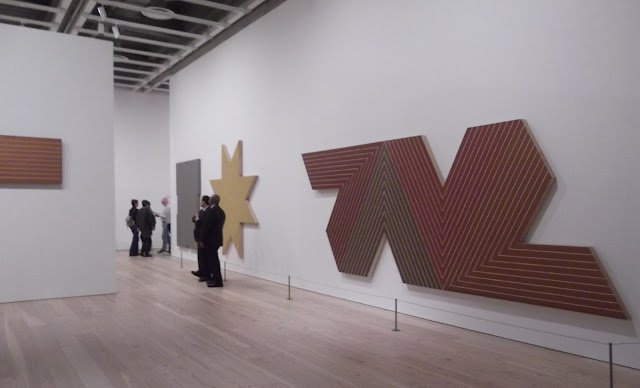 Then come his Benjamin Moore series and Concentric Square Paintings of the early 1960s and 70s— Stella combines often shocking colour with complex shaped canvases that mirror the increasingly dynamic movement of his painted bands. 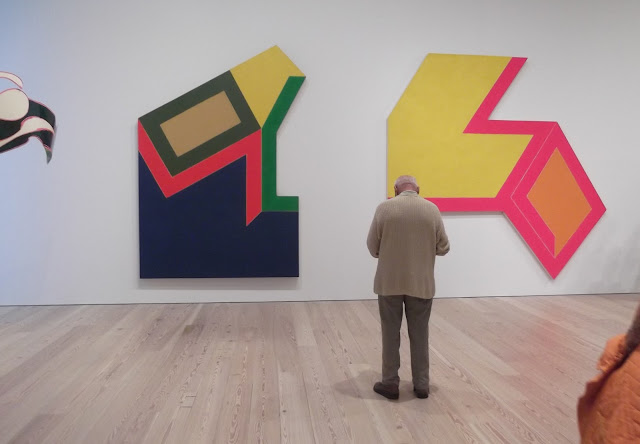 These were followed by the even more radically shaped Irregular Polygon Paintings with internally contrasting geometric forms painted in vibrant fluorescent hues; + the monumental Protractor Paintings, such as Harran II (1967) from the Guggenheim, composed of curvilinear forms with complex chromatic variations. We all love these & they look fabulous here. 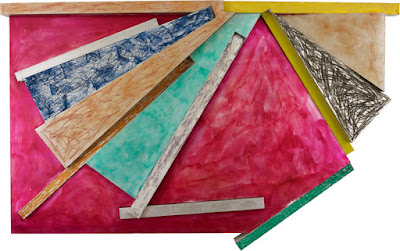 Stella's kind of abstraction knows no boundaries. From the mid 1980s on his works takes off from the wall in various ways. Stella said, “what painting wants more than anything else is working space—space to grow with and expand into, pictorial space that is capable of direction and movement, pictorial space that encourages unlimited orientation and extension. Painting does not want to be confined by boundaries of edge and surface.” 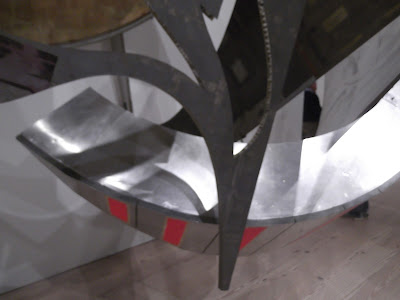 You can experience & enjoy this aspect right thro this show as pictures leap and bound, as sheets of cut metal project out from the picture plane, creating gestures further activated with swirling paint & reflective materials. All radical physical statements. 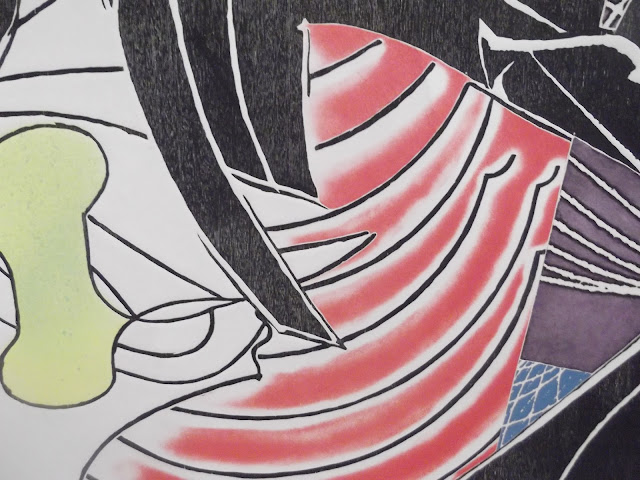 He also turns to printmaking like u have never seen before - large scale with one extraordinary piece measuring in yards across an entire wall with 67 different plates on it: wood, etched, inked, collages, - amazing. 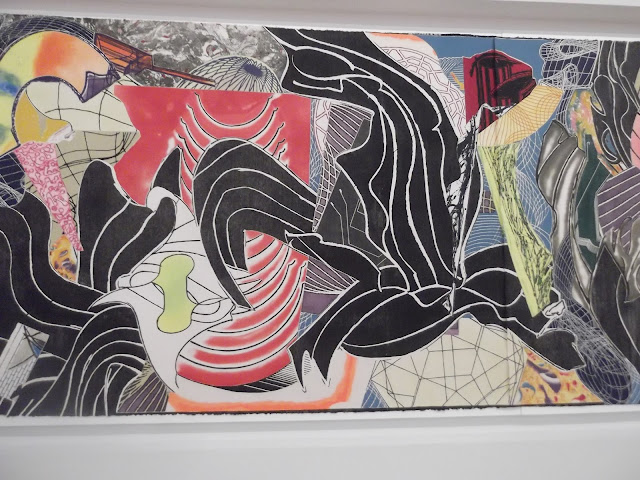 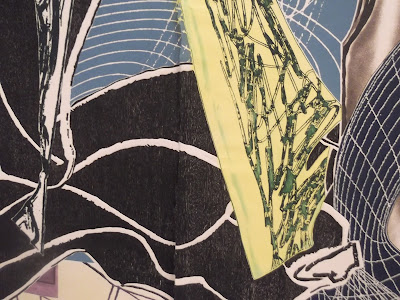 In the last thirty years, much of Stella’s work has been related in spirit to literature & music. His extensive Moby Dick series (1985–97) includes visual elements, such as waves & fins, which recur in Melville’s story.

My favourite tho is a black & white etching. Boy - would I love to own that! 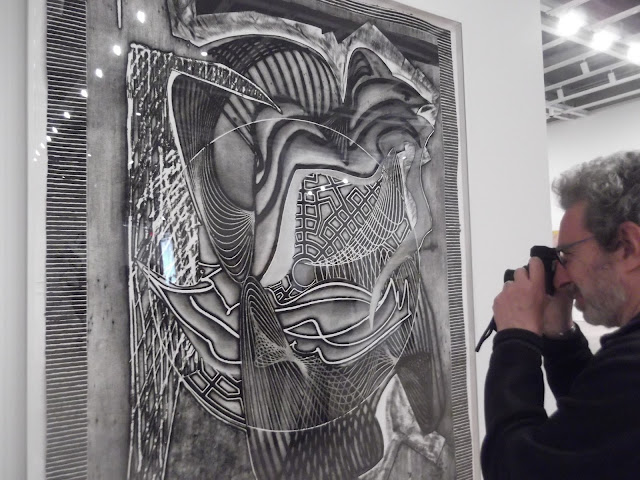 The most recent works are more & more like sculptures - almost free standing. 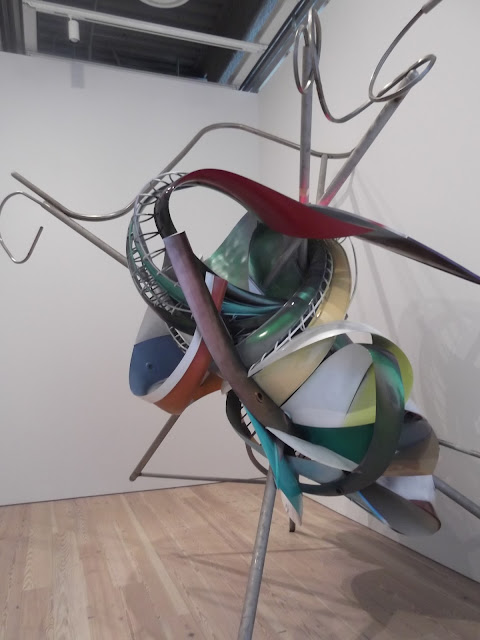 Recently Stella has used computer generated images & modelling to extend the complexity, layers & allusions of his material process well beyond traditional media for painting and sculpture. 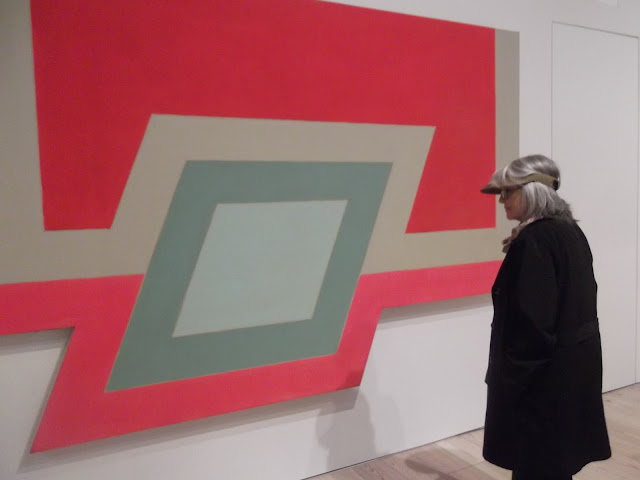 All in all it's a show that must be seen!!  At 79 Stella - what an appropriate name - is still as vigorous & as exciting as ever.  What next Mr Stella? 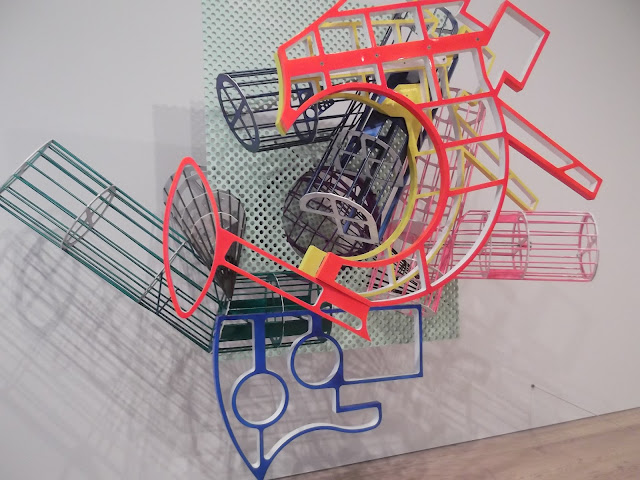