We often wonder how young artists will mature. In 1981 a group of 4th year art students exhibited at Edinburgh's New 57 Gallery. "They are going to be a prize crop," I wrote in The Herald. "Bold man" Ken Currie presented "huge black & white chalk drawings of prominent 20th century figures - an ambitious project & his monochromatic oil of a brawny mechanic is as remarkable." 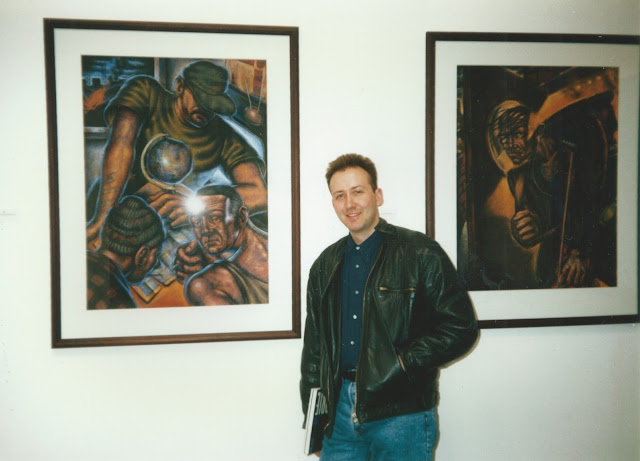 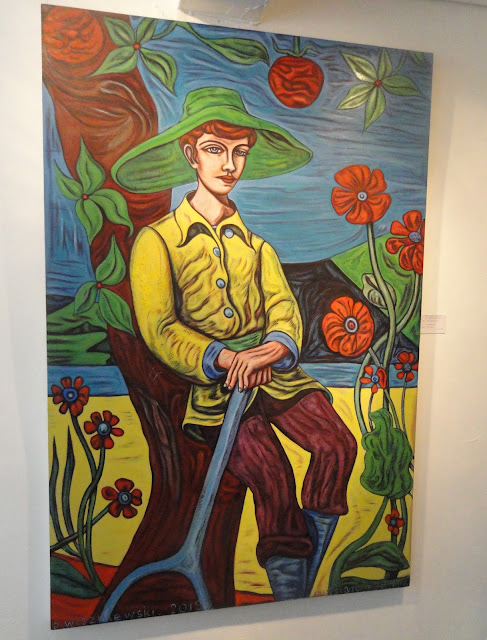 Roll on to April 1984 when "Whizz-kid Wiszniewski", already internationally known, had his first one-man show at Glasgow's Compass Gallery, with a solo show at London's famous Air Gallery later that year plus Nicola Jacobs Gallery, in Cork St, London. 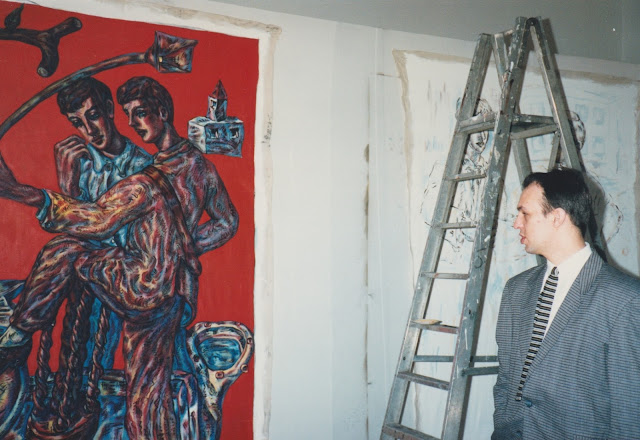 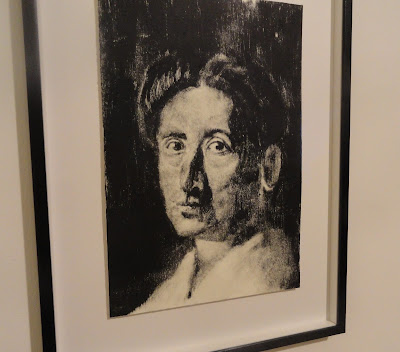 KEN'S PRINT 2015
So where are they now? Happily, 30 years on, full time artists, exhibiting world wide but also showing right now in Glasgow. Both have matured in impressive ways. 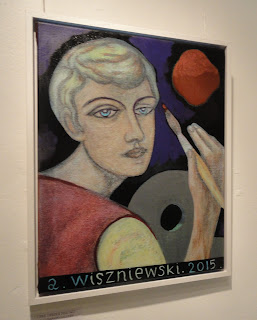 Currie at Glasgow PRINT STUDIO + Wiszniewski at The Compass are the MUST SEE September shows. 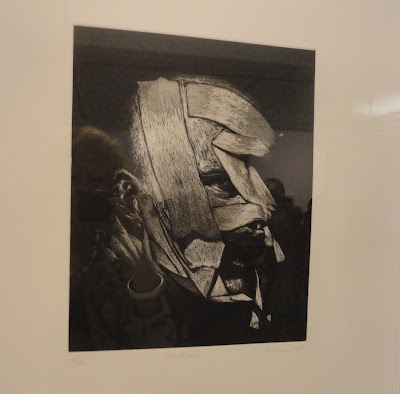 KEN CURRIE spent several months at Glasgow Print Studio making these etchings & monotypes. "I was a great experience. I couldn't fault it. The technicians were superb" he says. 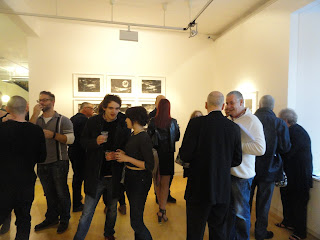 The results, 17 etchings & nearly 40 monotypes, are spellbinding. Black, An array of portraits, some from life, some based on legendary figures, others imagined, often make for gripping if uncomfortable viewing as they confront us with the human condition in all its aspects: savage, vulnerable, pitiful, desperate. 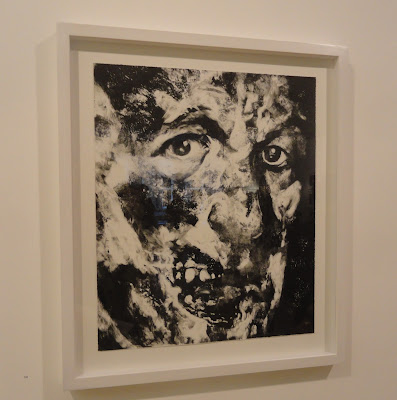 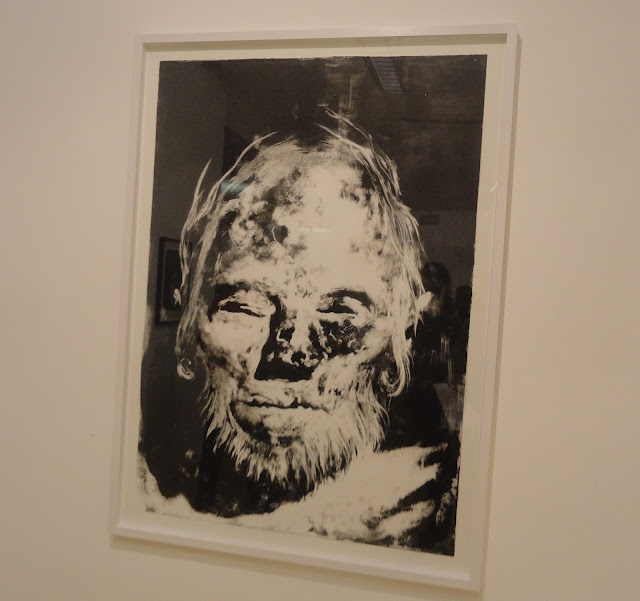 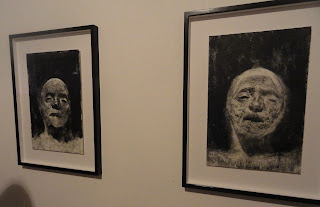 The faces age before your eye, or loom closer out of the mist. The skull is merely covered by fragile skin & Currie plays with possible ravages from facial accident, via decay  to death. 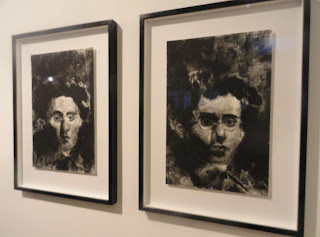 Deeply affected by political & humanitarian events, Currie has always responded to society's ills with intense, timeless images. These faces could belong to one of the innumerable Syrian refugees - or equally a soldier from 1914 at Mons.  Back in July 1988 as I wrote on the occasion of his Third Eye show, he was just as passionate about bigotry. 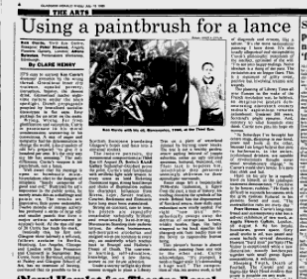 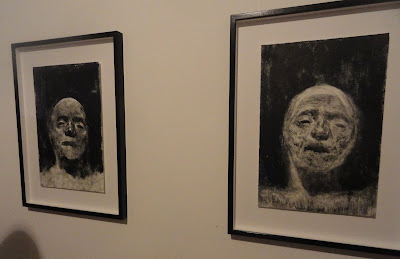 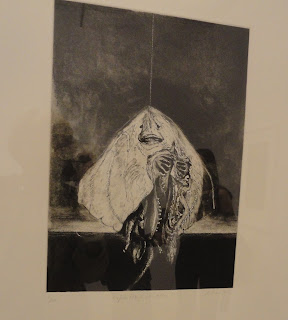 ADRIAN WISZNIEWSKI has a lighter approach to life but non the less considered. This year, with an award from Creative Scotland, he is off to explore Scotland & New Zealand in all their complex history & geological splendour. Meanwhile till Sept 25th his bold, vibrant figurative oils fill the COMPASS GALLERY. 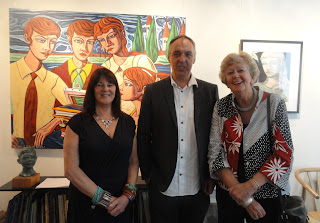 It has often seemed to me that Wiszniewski's family - his wife & offspring - inspire his romantic, handsome, blue-eyed figures. 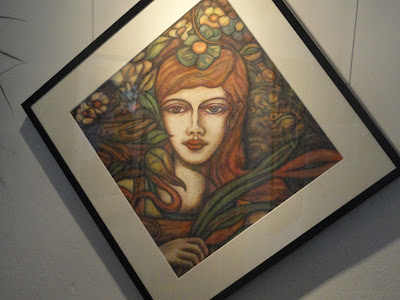 Idealised maybe, yet this personal mythology of colourful fantasies of sunlit brilliance, overflowing patterns of people & plants & dreamy imaginings have served him well with his latest project. 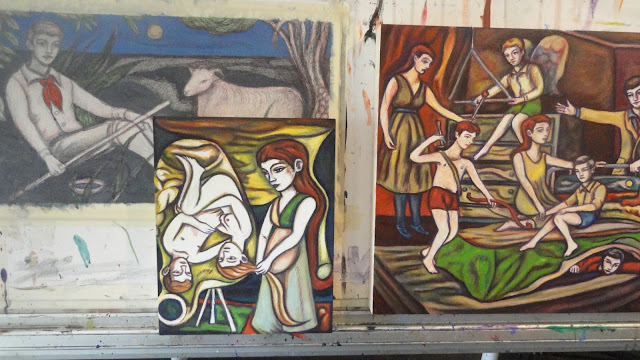 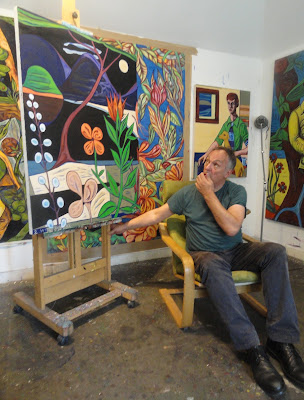 Asked to design a CD sleeve for a new recording of Stravinsky's famous Rite of Spring by David Patrick, he extended his research, so many new paintings here are inspired by this avant-garde ballet/concert scenario, whose sub-title was, significantly Pictures of Pagan Russia in Two Parts. 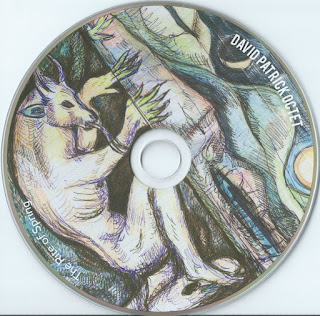 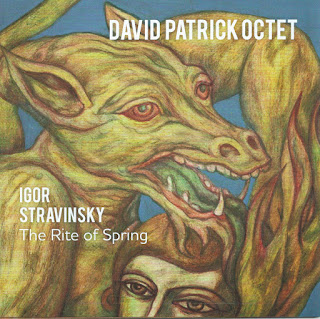 Another Russian reference is 'Red Wedge", the constructivist icon, which pops up in several works. He also has a Red dog/black dog.. 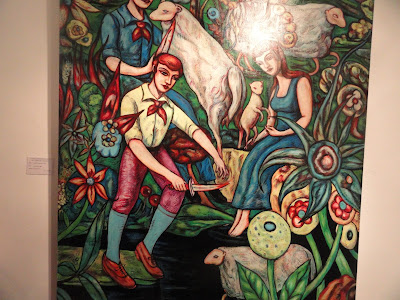 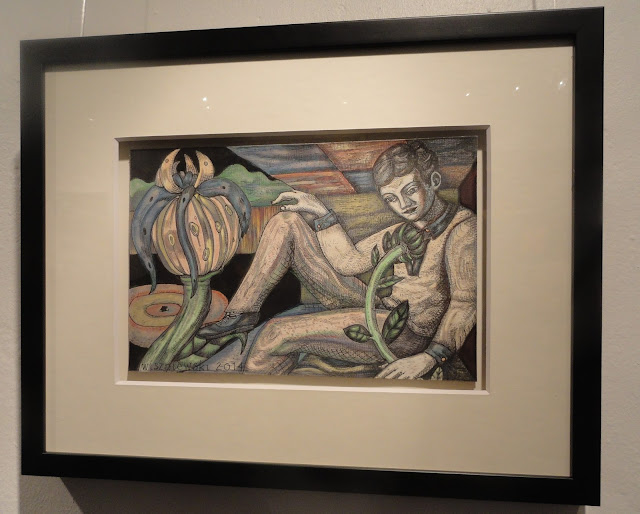 One of his pix is called Dance of the Maidens" Youthful flowers are dancing. They want attention," he tells me. "The chosen maid dances in frenzy till she falls with exhaustion - and dies." All pre-Christian mysticism & Russian folklore. Strong stuff.

One of Adrian's signature styles is his use of swirling sinuous curves & arabesques, fluent, flowing draughtsmanship. He makes it look so easy, relaxed. 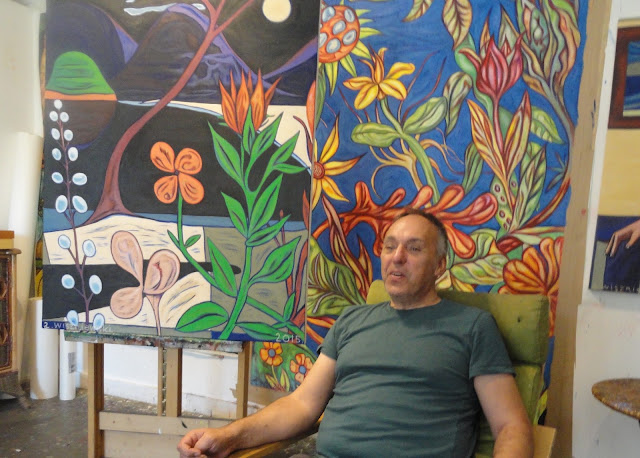 Wiszniewski has always been ready to try out different media - design, tapestry, ceramics, neon, furniture, stage design, even writing a novel. Apropos Rite of Spring, he's now keen to do sets for a ballet. 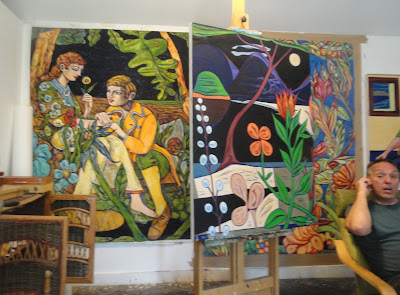 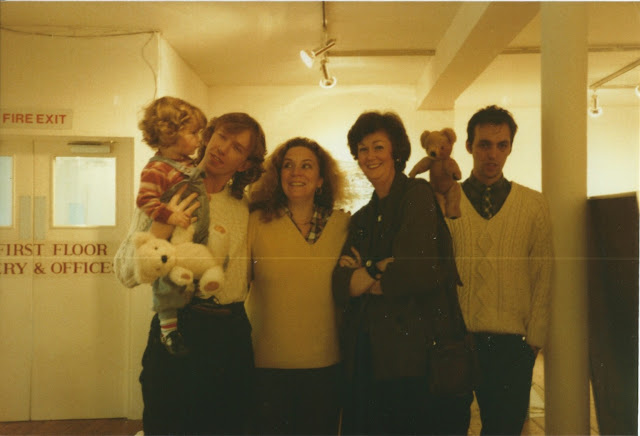 So wonderful to see Glasgow graduates & Scottish at that, forging ahead over a period of 35 years with impressive determination, inspiration & control. Success hard won. 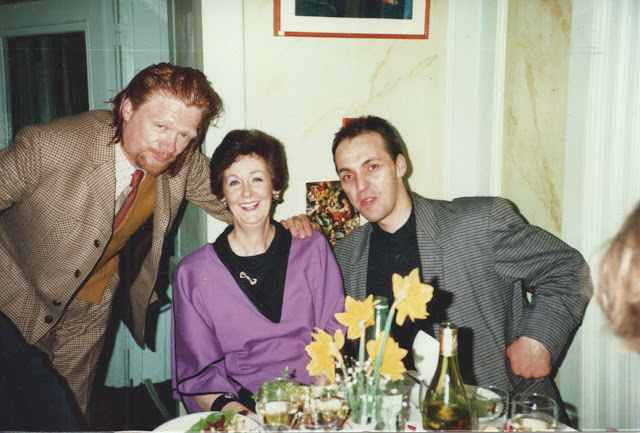