Rarely if ever do 4 pictures draw a crowd in NYC - or London or Paris. But Van Gogh's flower paintings are different. Currently 2 iris + 2 rose compositions at the Met can hardly be seen due to the crush. 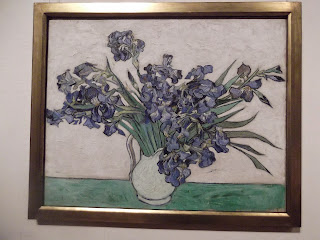 However the Met has been clever, providing 2 videos explaining how Van Gogh's colours have faded a good deal - so that what are now gentle colour schemes were originally loud, bright, savage, even raw. The edges of the canvas tell the true story, a shocking bubblegum pink now faded to soft baby cream. He was very interested in colour theory,

"The laws of the colours are unutterably beautiful," he said. "lt's up to the artist to orchestrate the masterpiece." Involved in this "revolution of colour", his work became emphatic, graphic as he painted wet on wet, at speed. 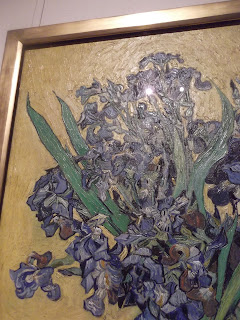 All 4 canvases were completed in 3 days at the end of his life, just before Van Gogh left St Reme by train in May 1890.
He wrote about it in a letter. "I am doing a canvas of roses with a light green background and 2  big bunches of violet irises, one lot against a pink background in which the effect is soft and harmonious because of the combination of greens, pinks; on the other hand the violet bunch - ranging from carmine to pure Prussian blue - stands out against a startling citron background, with other yellow tones in the vase and stand - so it is an effect of tremendously disparate complementaries, which strengthen each other by their juxtaposition." 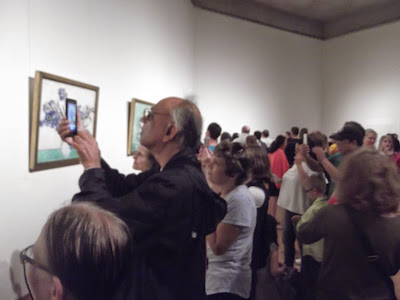 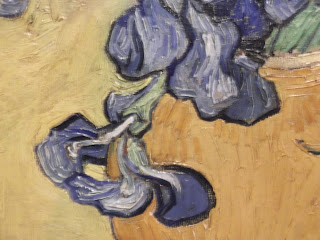 Working in a frenzy, starting from life, he created pictures which were a distillation of nature, pictures of a singular beauty & intensity. Irises grew wild in the ditches around Arles; waterfalls of big red roses in the garden of the St Remy asylum. These flowers prompted endless experiments in colour & movement, resulting in this wealth of vibrant, dazzling images.