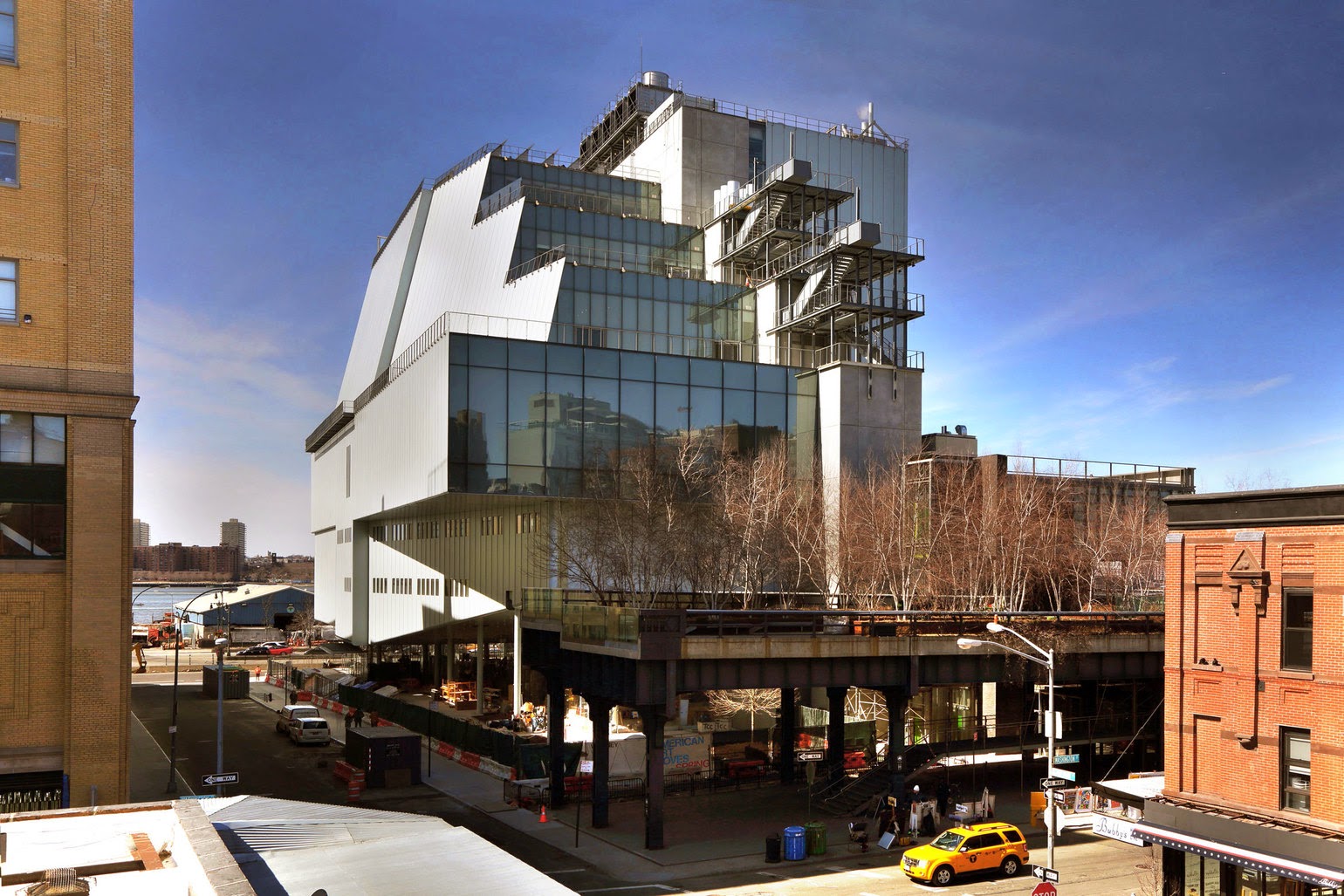 Ugly, clunky, ungainly on the outside, yet elegant, light-filled, spacious inside, New York's new star, the $422 million WHITNEY MUSEUM OF AMERICAN ART got off to a good start yesterday with sunshine n' blue sky showing off its superb Hudson River setting to advantage. Even before you enter it's a case of location, location. 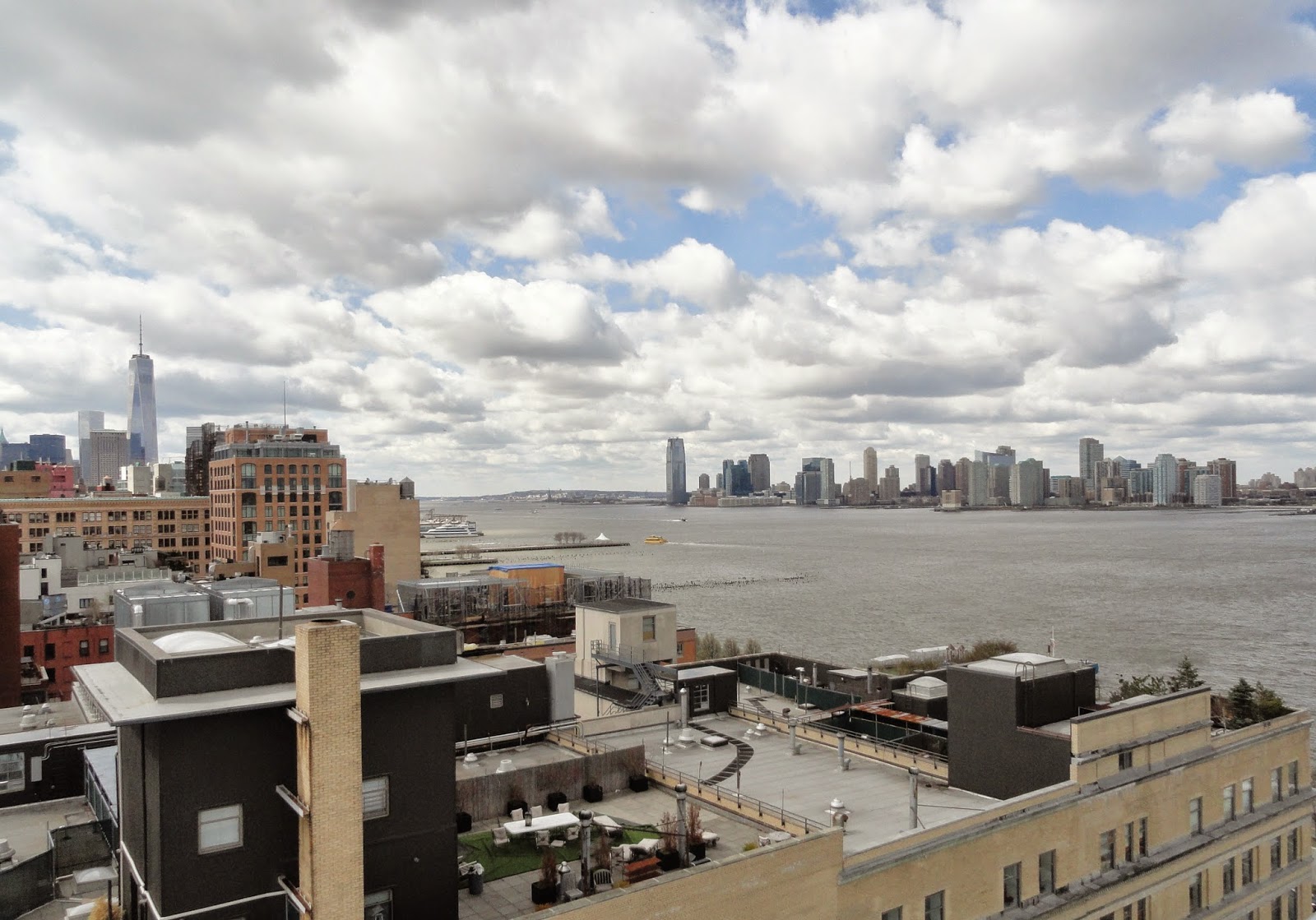 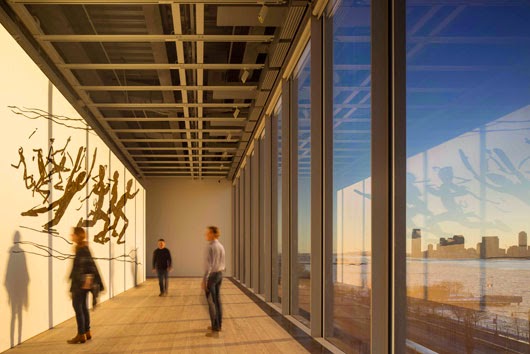 Sited at 99 Gansevoort St, right at the start of the popular tourist spot, the High Line, (7 million visitors last year) & with sweeping panoramic views overlooking the city: Chelsea & Greenwich Village to the east & water to the west, adjacent to swanky boutiques & expensive real estate, this hot spot used to be grungy, down at heel & industrial. 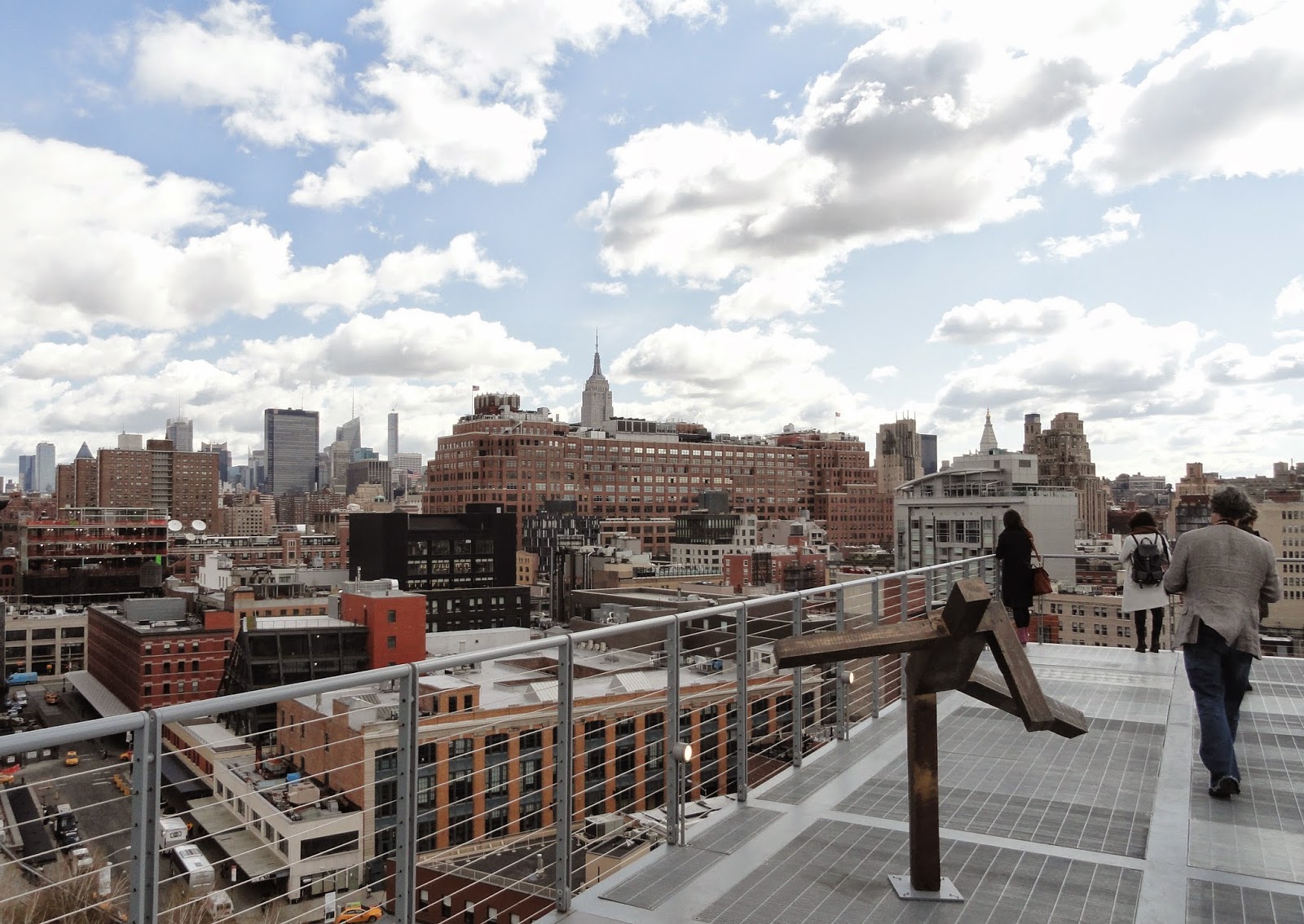 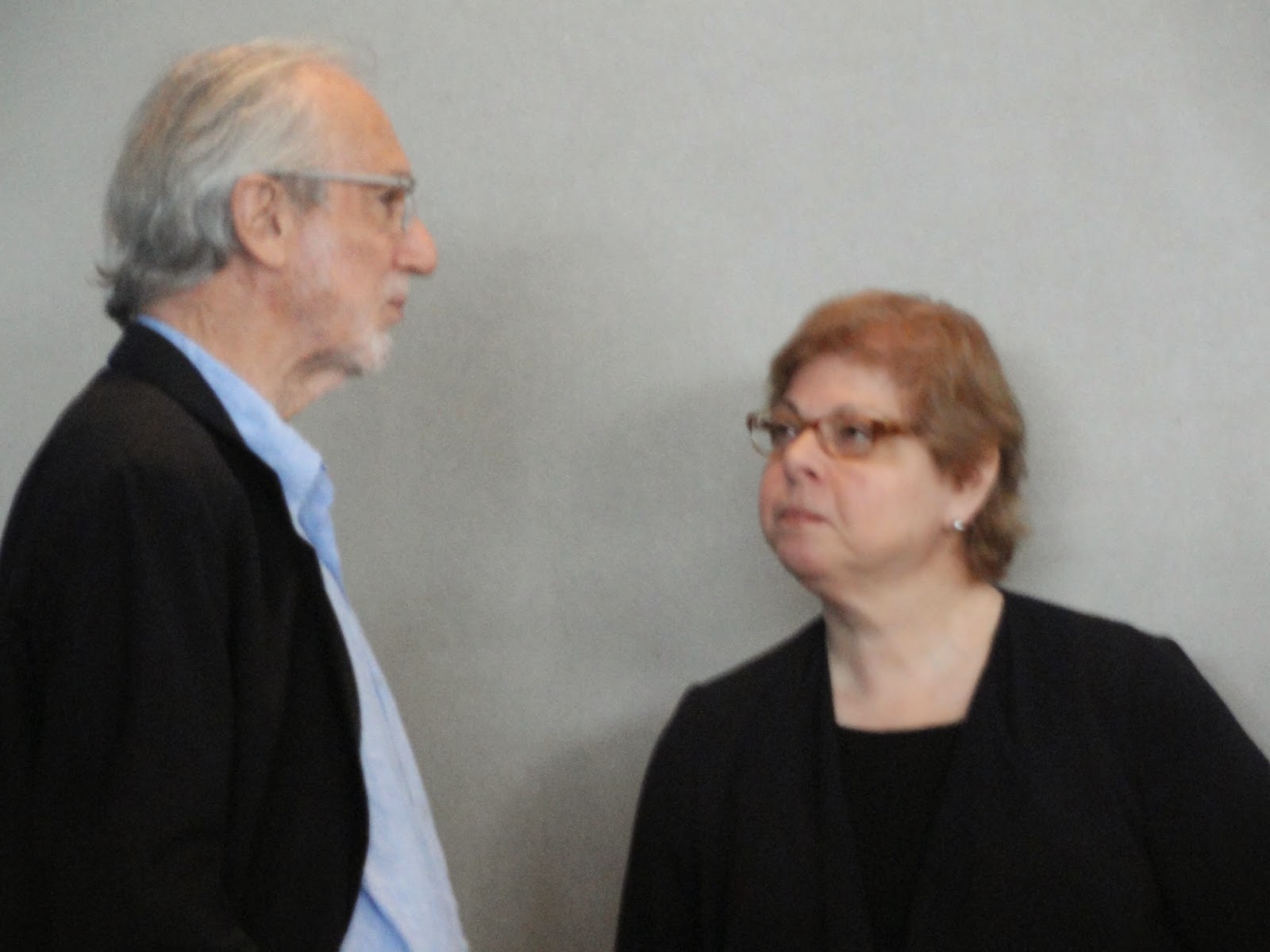 Donna
"Its a very inspired location. We think so!" says chief curator Donna de Salvo. "Here u really are in a special place, yet it's - as far as the eye can see." 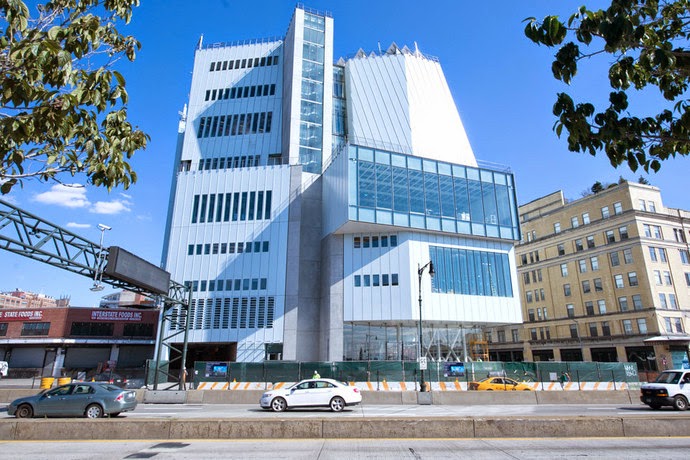 It's also a long $40 taxi ride from the old famous upper East Side Breuer Building on Madison Avenue, and has taken many many years, multiple attempts + much infighting to achieve, but at last Renzo Piano's building is open. 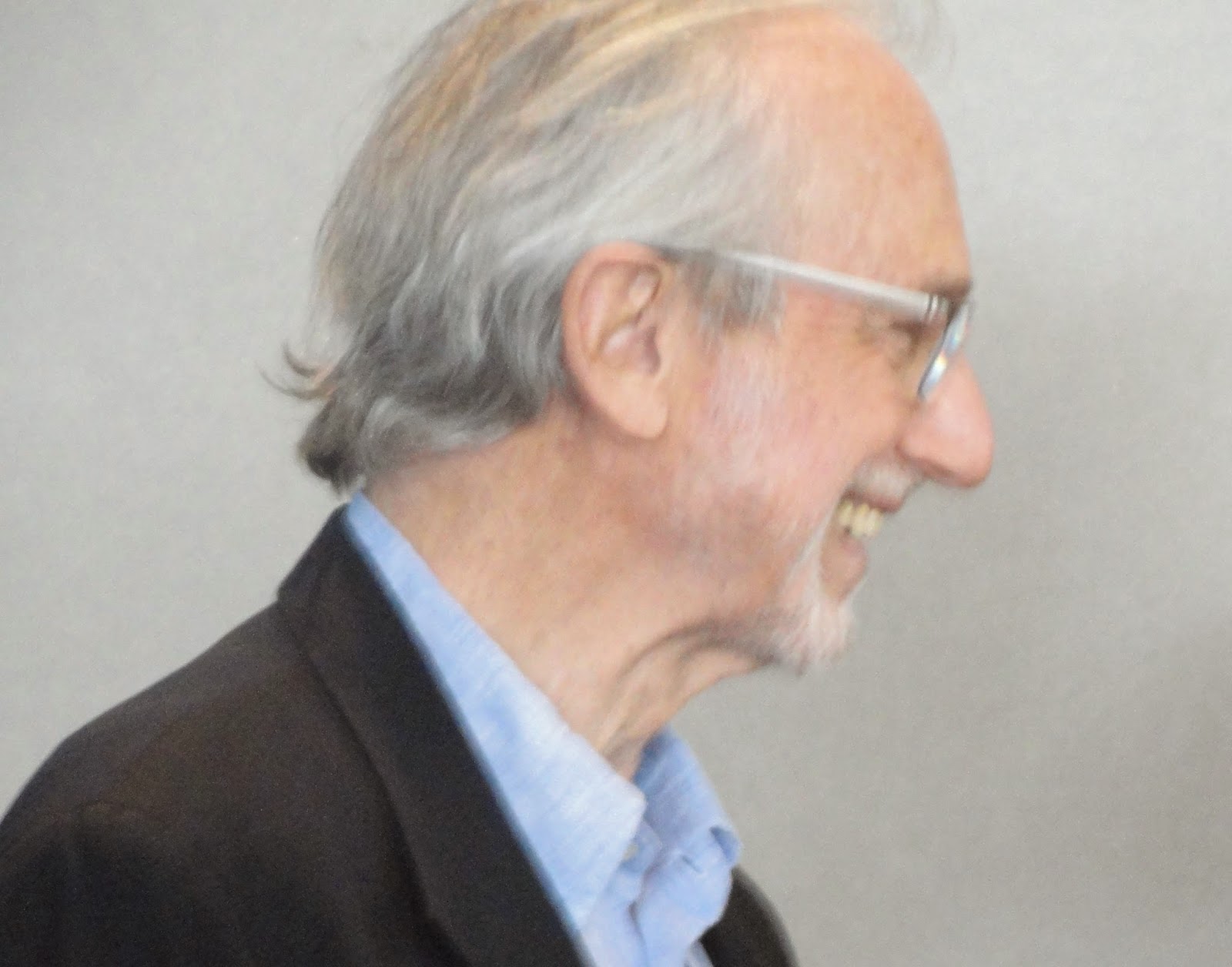 Piano's Italian charm has no doubt helped along the way. Tall, thin, dignified, he emphasised the building's relationship to the city and the need for a Piazza. "I don't call it a lobby! I'm Italian." He also refused to explain the building - "Go & enjoy it. The singer does not explain the song before he sings!" But he did say that 1000 people worked on the project, & emphasized that a gallery should be open, accessible, where u can enter a "world of art & freedom." 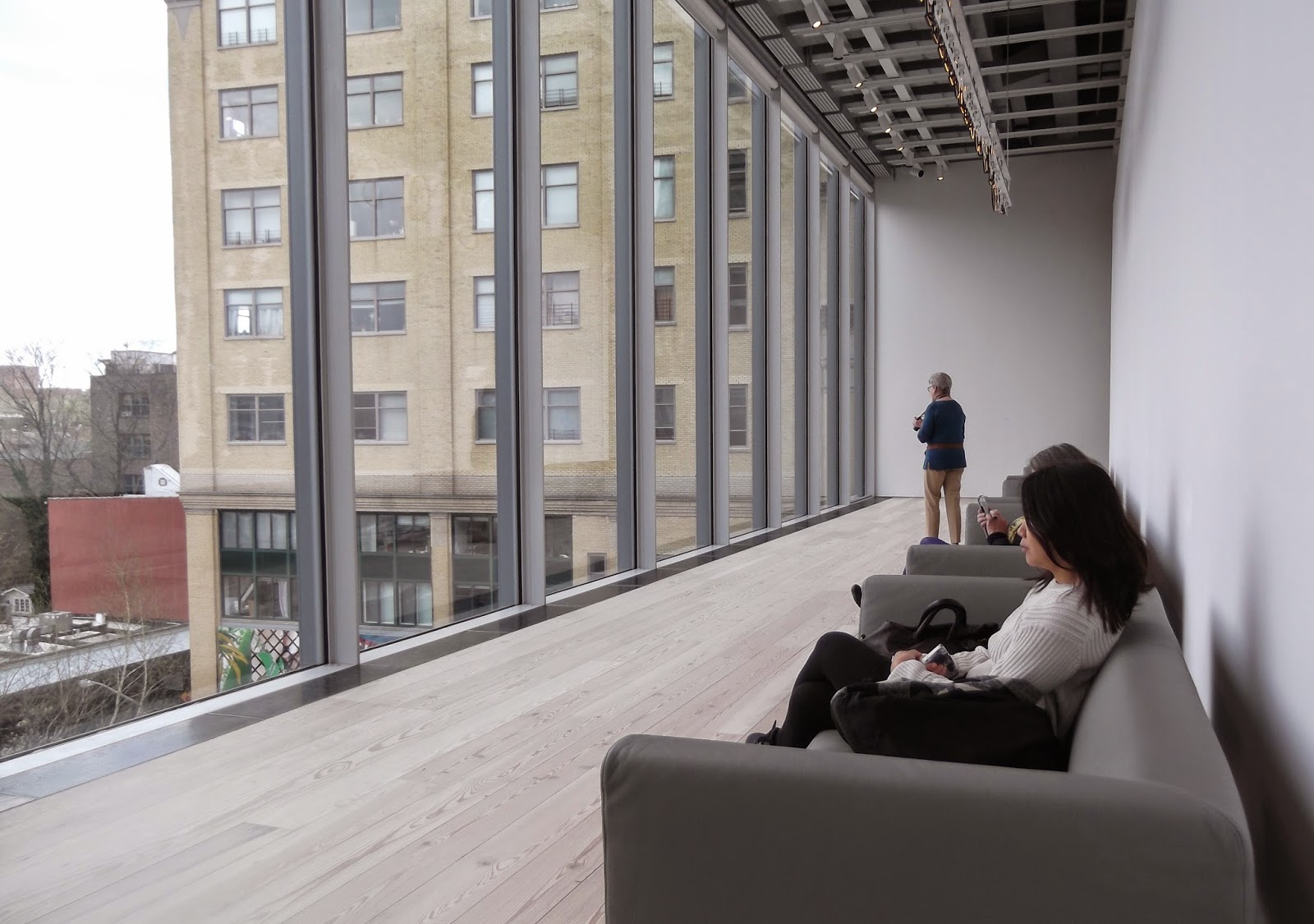 And thank god, there are benches to sit on, (not enough & none on Floor 5) even some sofas to relax in while u soak up the spectacular views. I was the only person there in a wheel chair, but overall things worked well: floors flat, no steps, even low down buttons to open doors onto the terraces, but - complaint- handicapped toilet doors impossible. Literally too heavy to open. 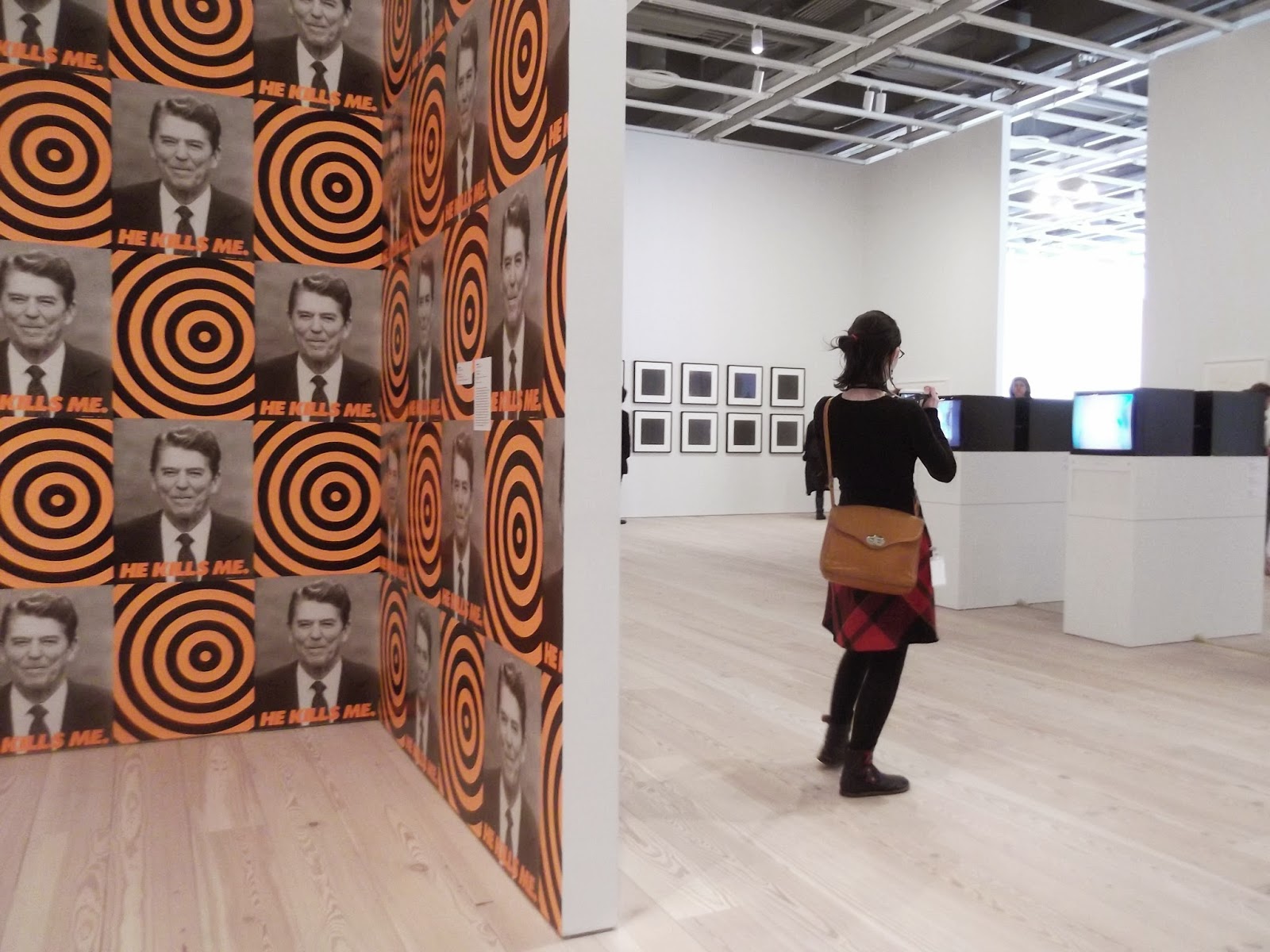 The museum took 4000 tons of steel, weighs 28,000 tons! It has 50,000 sq ft for exhibitions, plus lots more space for offices, conservation, a study centre, theatre, restaurant. The 4 elevators sit at the very centre of the building - and are STILL slow - but all are an art work themselves, the last creations famous Richard Artschwager, (who lived down the road from us upstate,) worked on. For once truly immersive, he designed one with a door & window in his characteristic wood grain, black and cream; one with a decorative floor + the freight elevator like a giant woven basket. 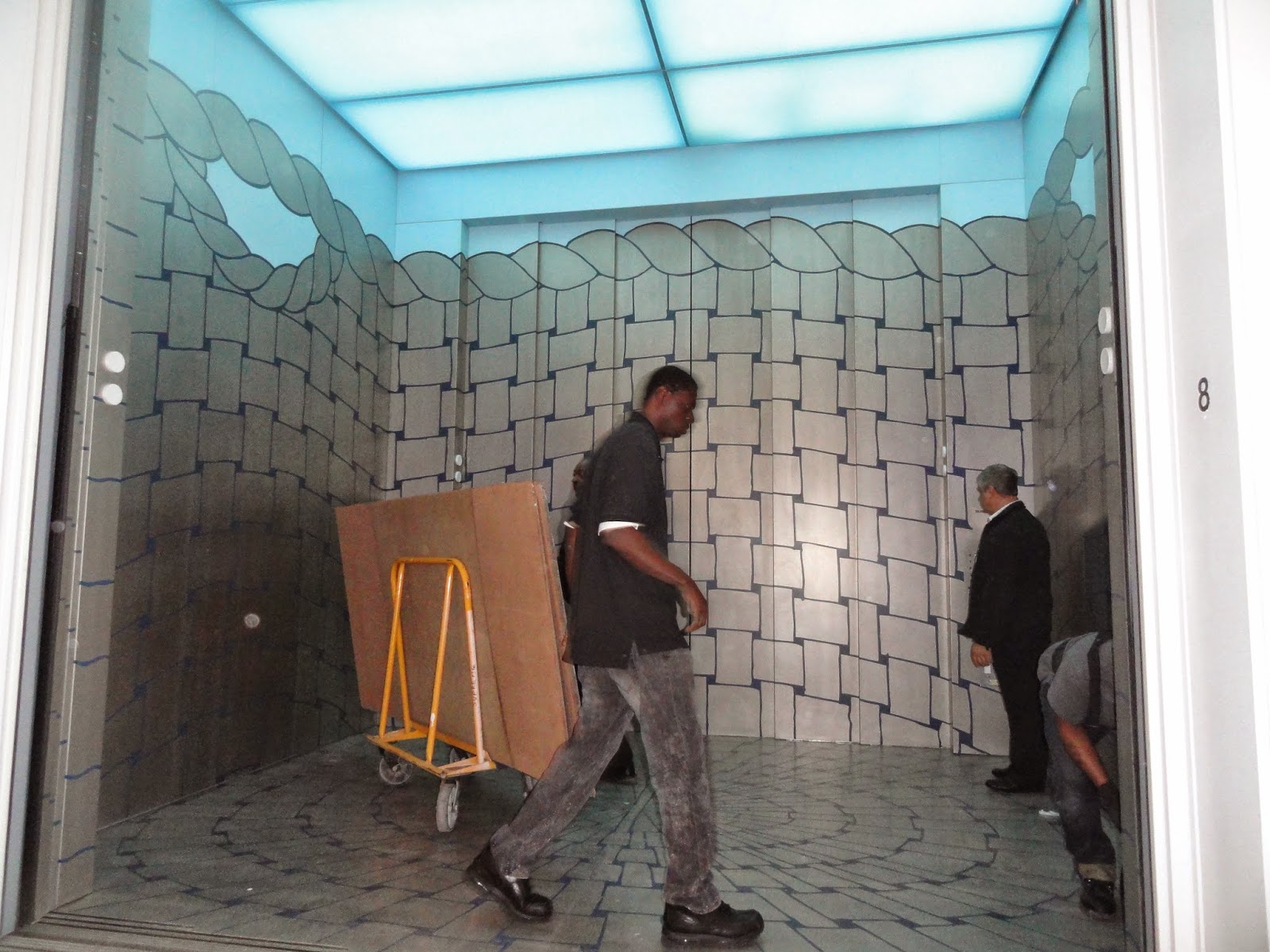 High ceilings + huge windows, these immense galleries include one which at 18,200 sq feet and no columns, is the largest museum gallery in NYC. There are lots of outside spaces for sculpture, running along the terraces. Altogether 8 floors, with 4 for exhibitions. The launch show, AMERICA IS HARD TO SEE, with 600 works from 400 artists, fills them all. In the future 2 floors will be reserved for the permanent collection; 2 for new shows. 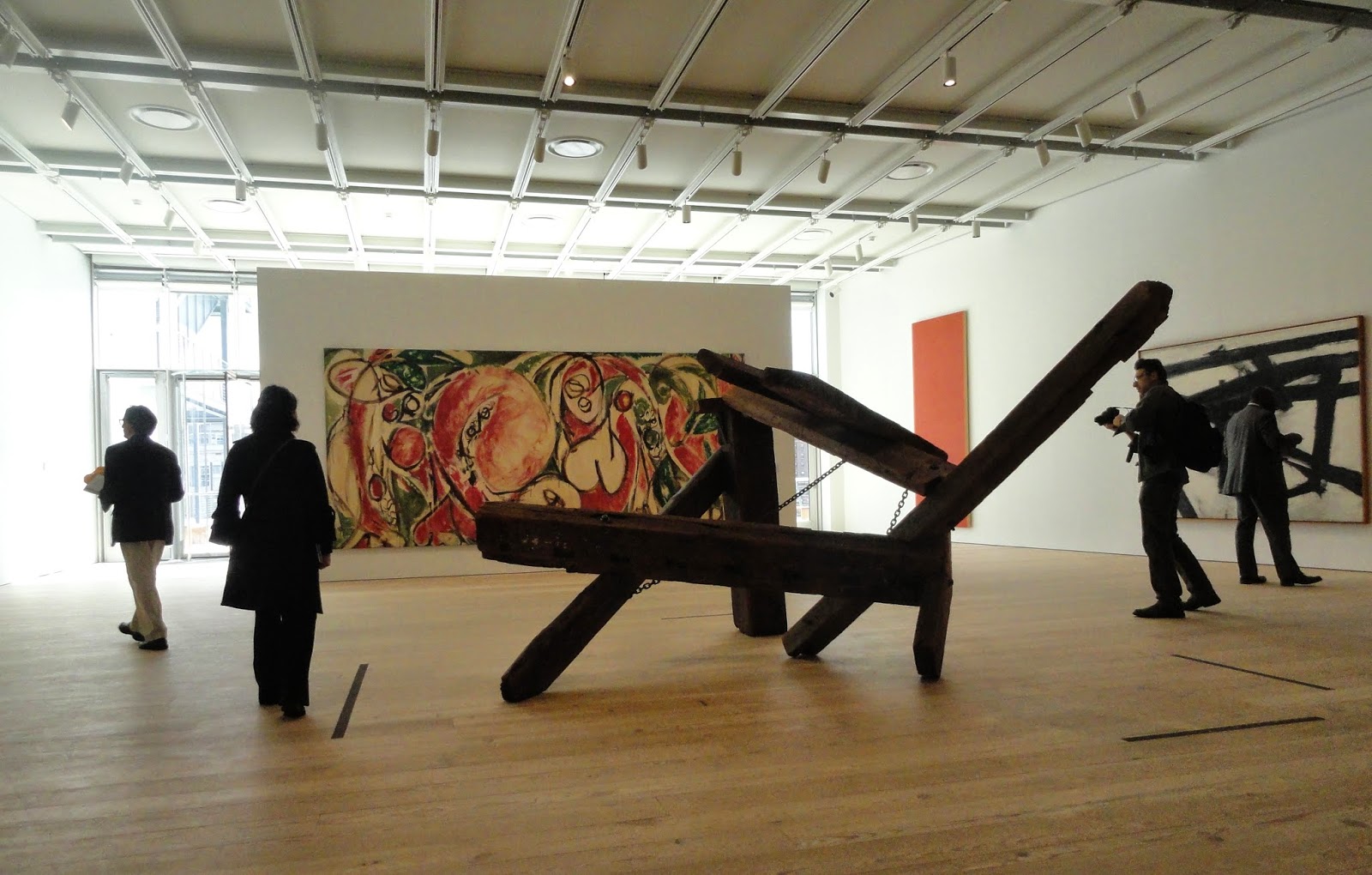 So what IS American art??? Who is an American painter?? The Whitney was founded by the heiress Gertrude Vanderbilt Whitney in 1930. Back then rules n' regulations were less strict & she was focused on championing innovative art in the face of love of old masters and considerable resistance to the newfangled. And from 1974-1990 artists had to have an American passport or green card to be allowed in. 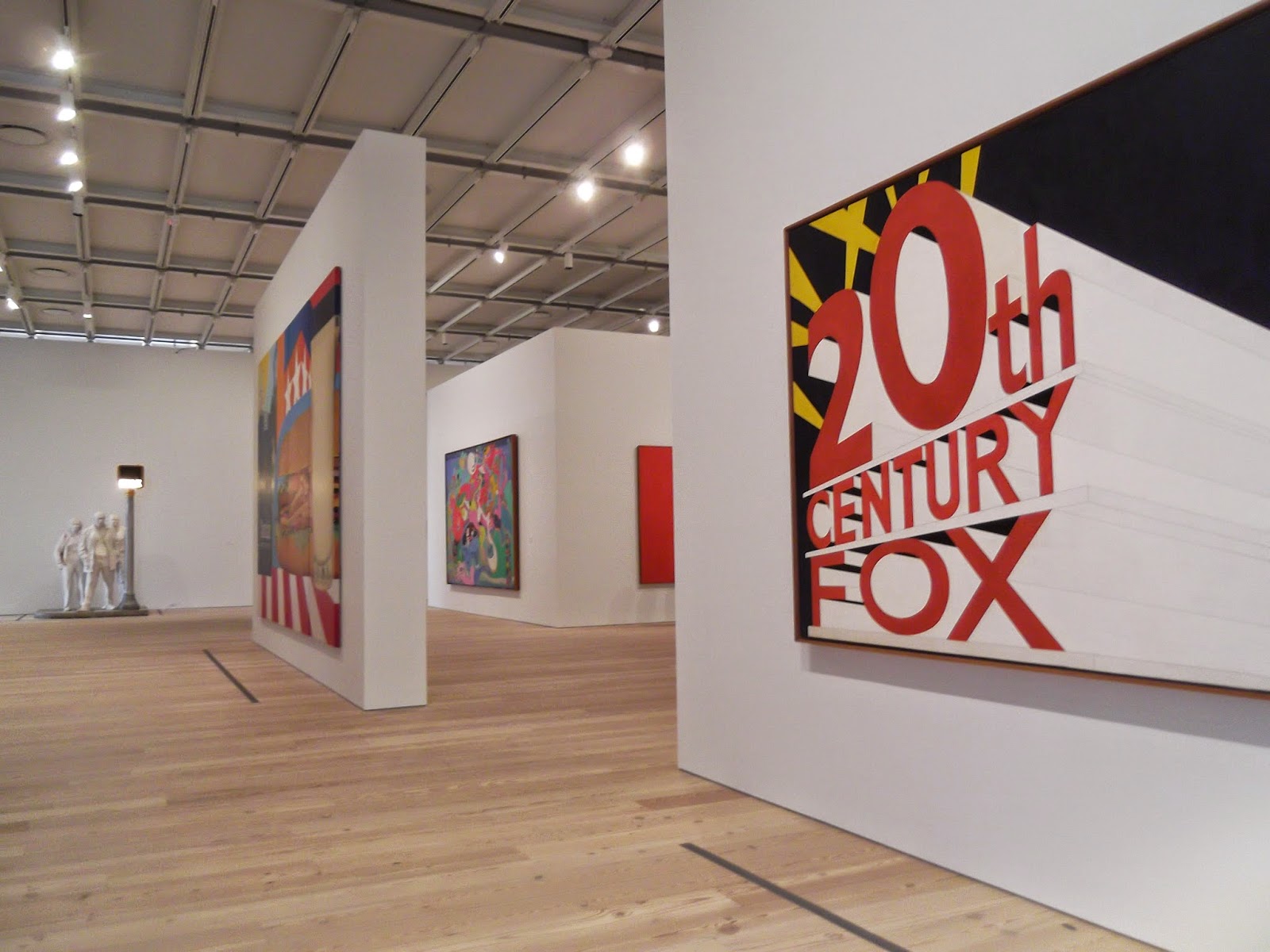 Today things have changed. America is a melting pot. Di Salvo explains, "There's a much fuller picture of the hybrid nature of the collection. A migratory pattern reflects the US itself." So for the first time labels will tell where an artist was born, eg Kusama and On Kawara come from Japan but have lived intermittently in NYC. 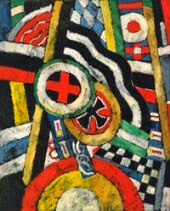 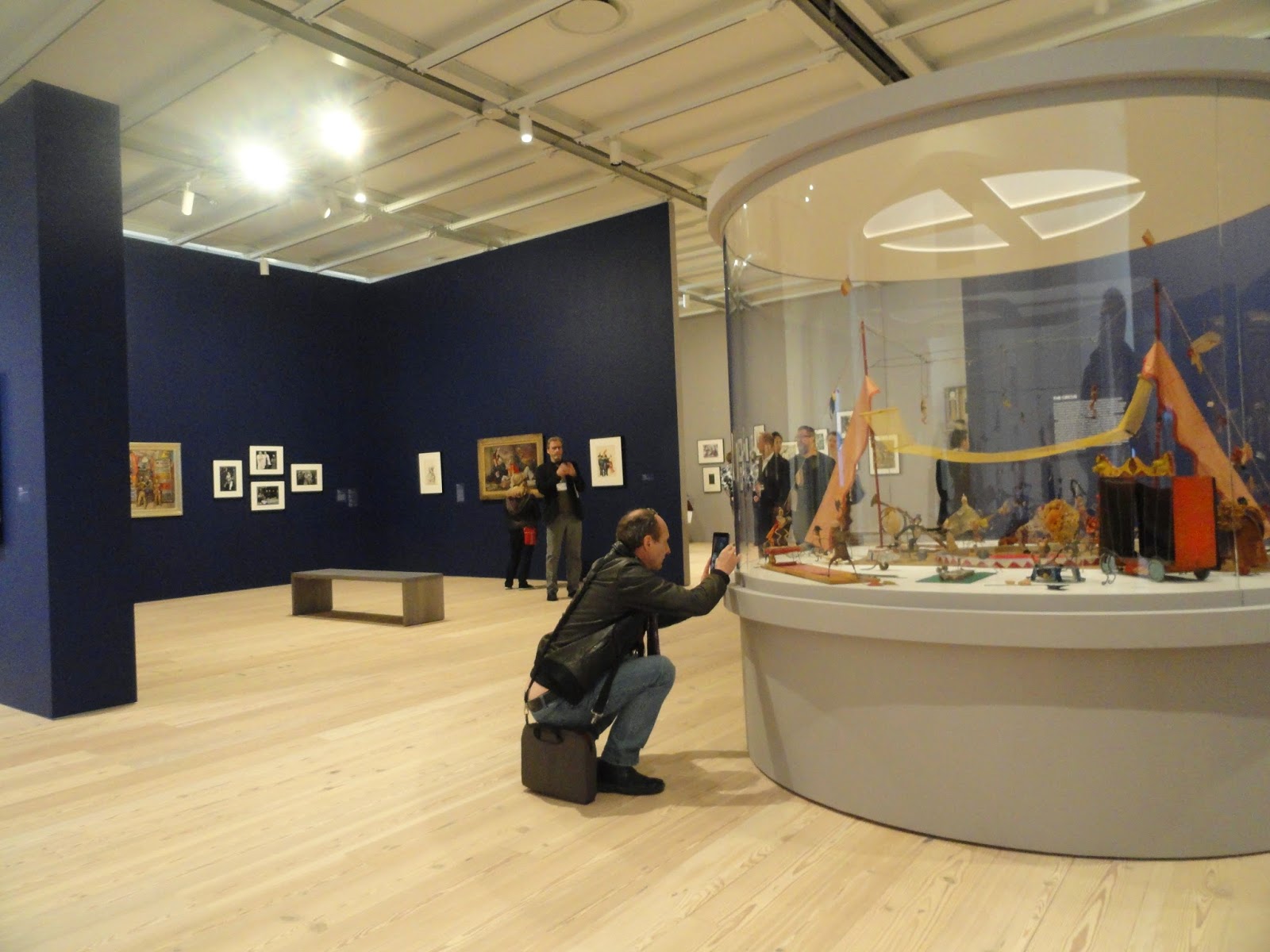 But some pictures have never ever been shown before. How did they select I asked? A team of 6 including di Salvo, worked for 2 years +. 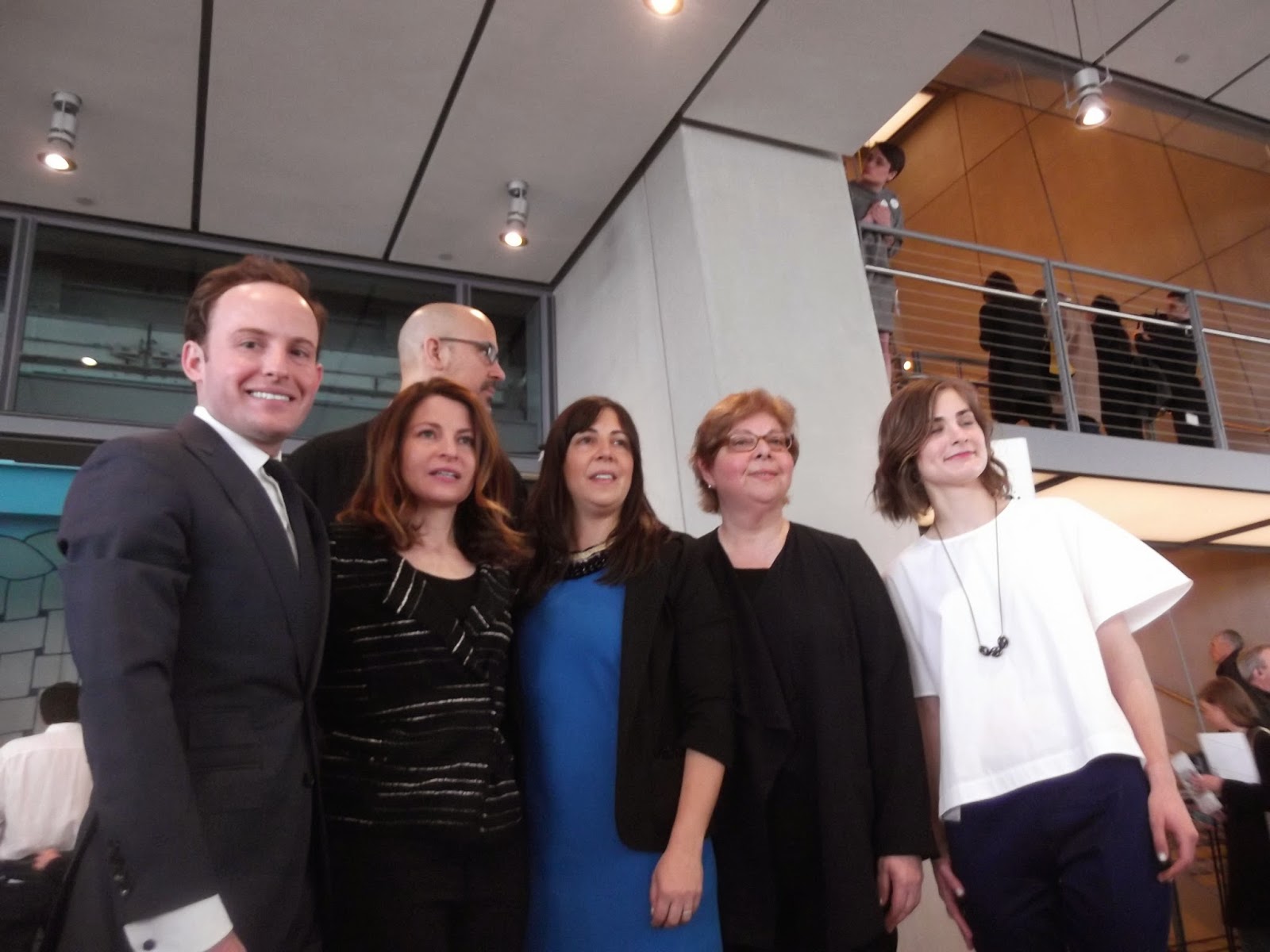 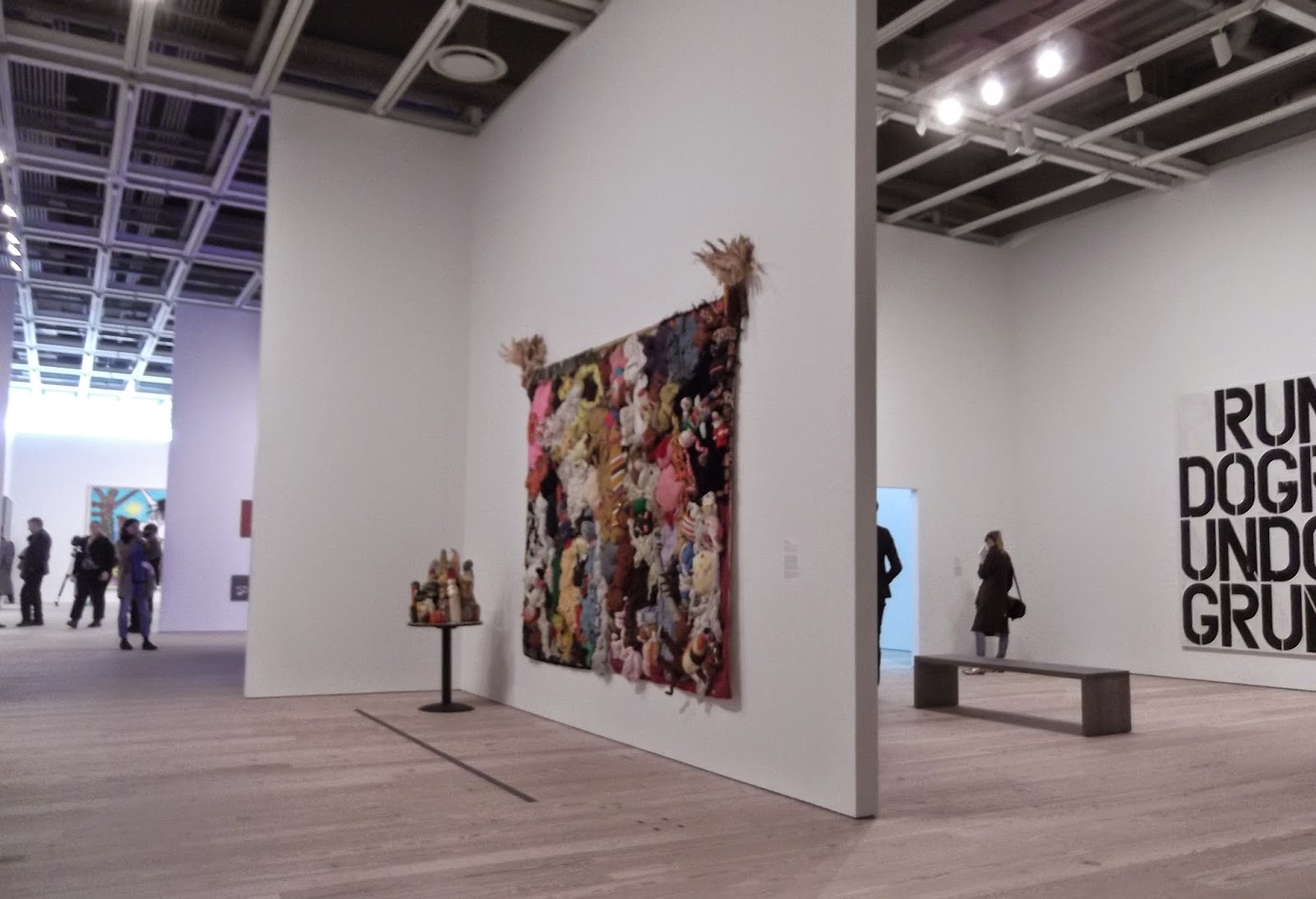 There are 23 "chapters" each, roughly 5 per floor, taking their name from a picture in that section, ie Music Pink & Blue on Floor 8 comes from O'Keeffe's 1918 oil. Scotch Tape on Floor 6 refers to Jack Smith's 1959 video, & the section includes Jim Dine's Black Rainbow on corrugated paper.  At first I was very confused. Also the prominent names high up on the walls are the names of sponsors not artists! 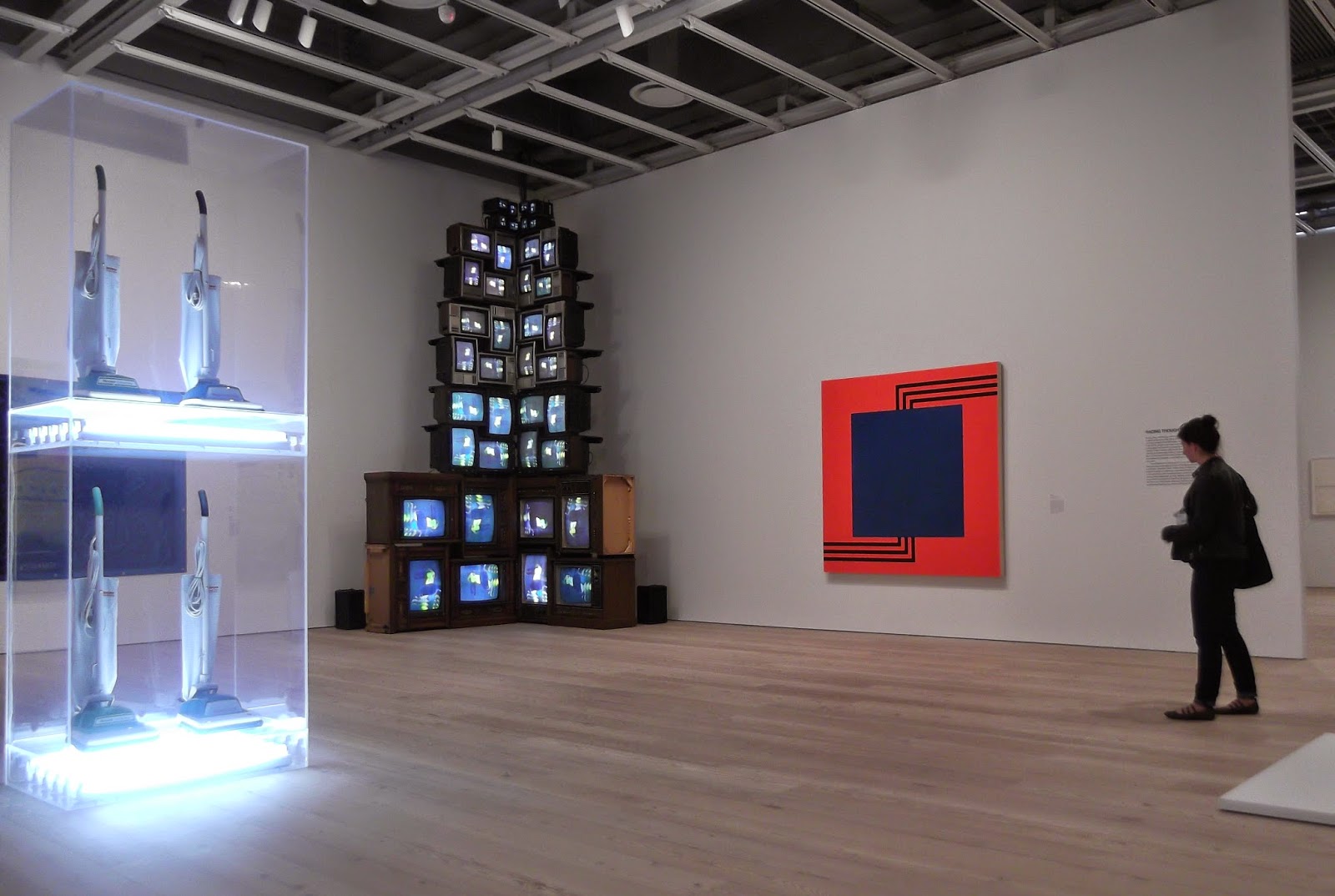 Some sections or grouping like Pop art and Abstract Expressionism are obvious. Some, like Fighting With all our Might, or Love Letter from the Front, are not. Being European, I assumed, wrongly it was about World War II or Vietnam, but in fact referrs to the Depression, 1929 crash &  AIDS, via Ben Shahn, Dorothea Lange, Nan Goldin, Robert Maplethorpe, & Martin Wong.

Some walls had works tightly grouped and hung Salon style which I really liked. It allowed for the inclusion of photography, prints, small drawings, (by Richard Serra, Ellsworth Kelly, Adam McEwan no less.)
There was less video than I expected.  (I was grateful for that but many will complain.) Less women of course, tho I think they have tried. No Native Americans. Few African Americans. The USA art world is STILL male and WASP! 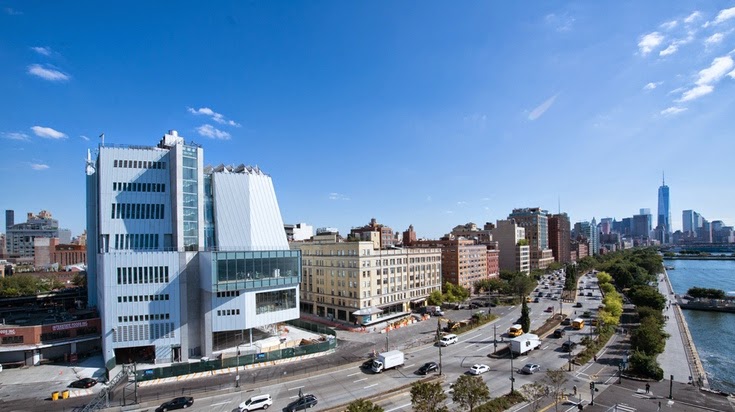 I do worry. The Whitney claims to support only the best in American art. Yet its last blockbuster just before the move was the commercial Jeff Koons. What does that say about the level of American art right now?? 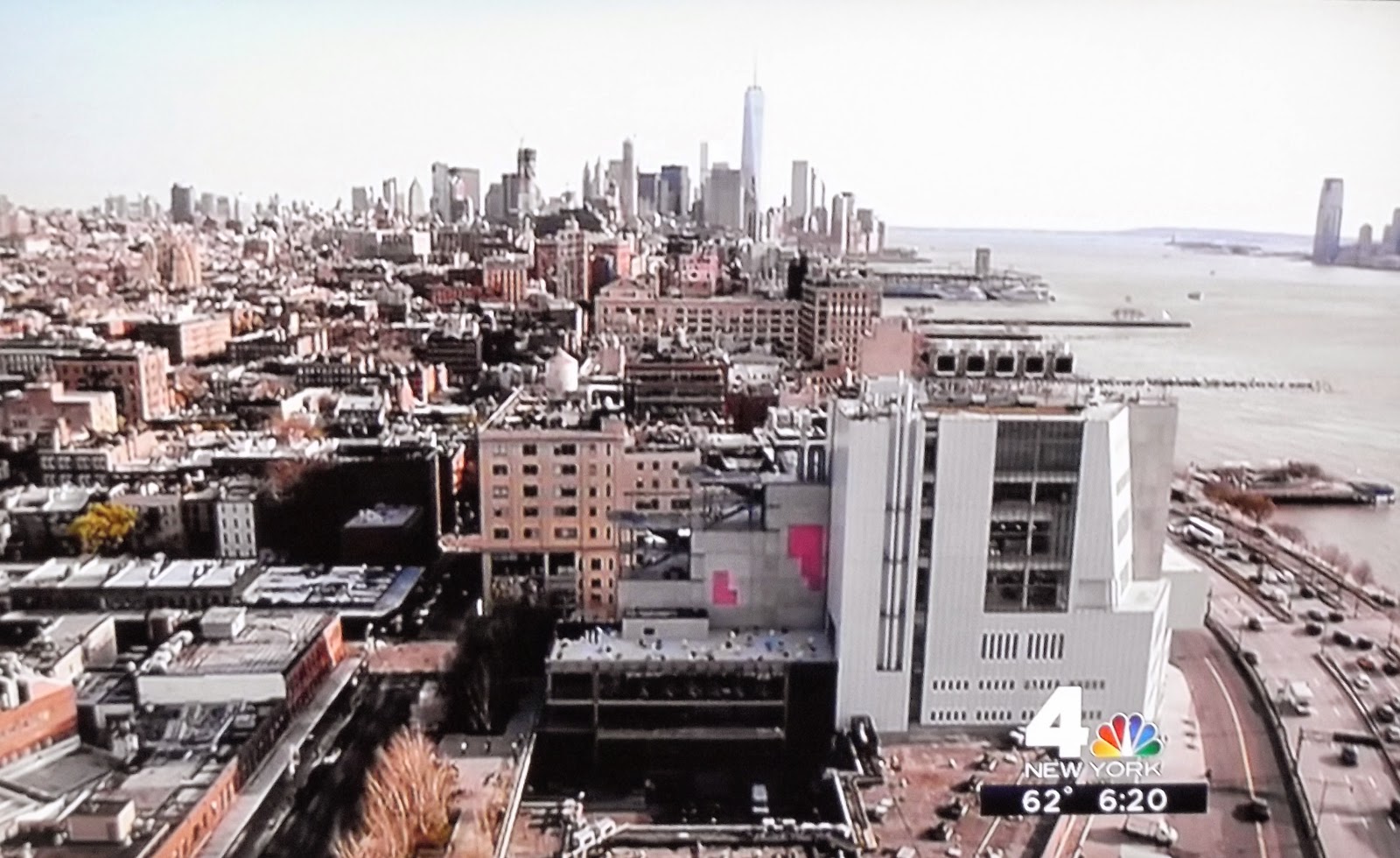 There are other quibbles. The space is not as big as we expected. The so-called 'performance' (slides of the downtown area) by Yugi Agematsu was disappointing and
it would help the public if there was a wall list of artists in each section, or even a list of artists on each floor by the elevators, -  and so on.
But it's built. It's open. The Whitney's 21st century downtown life has begun, and we wish it well. 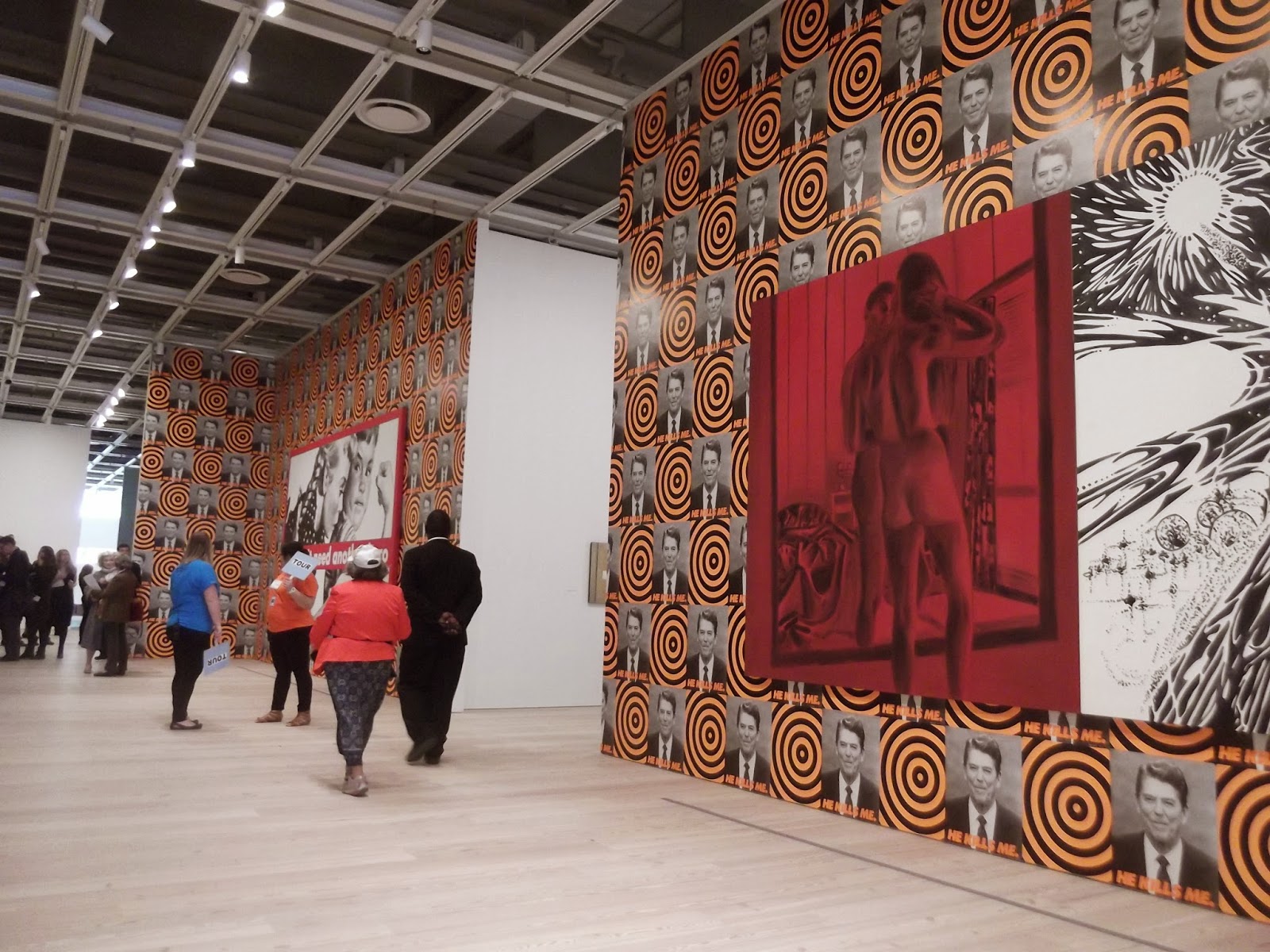 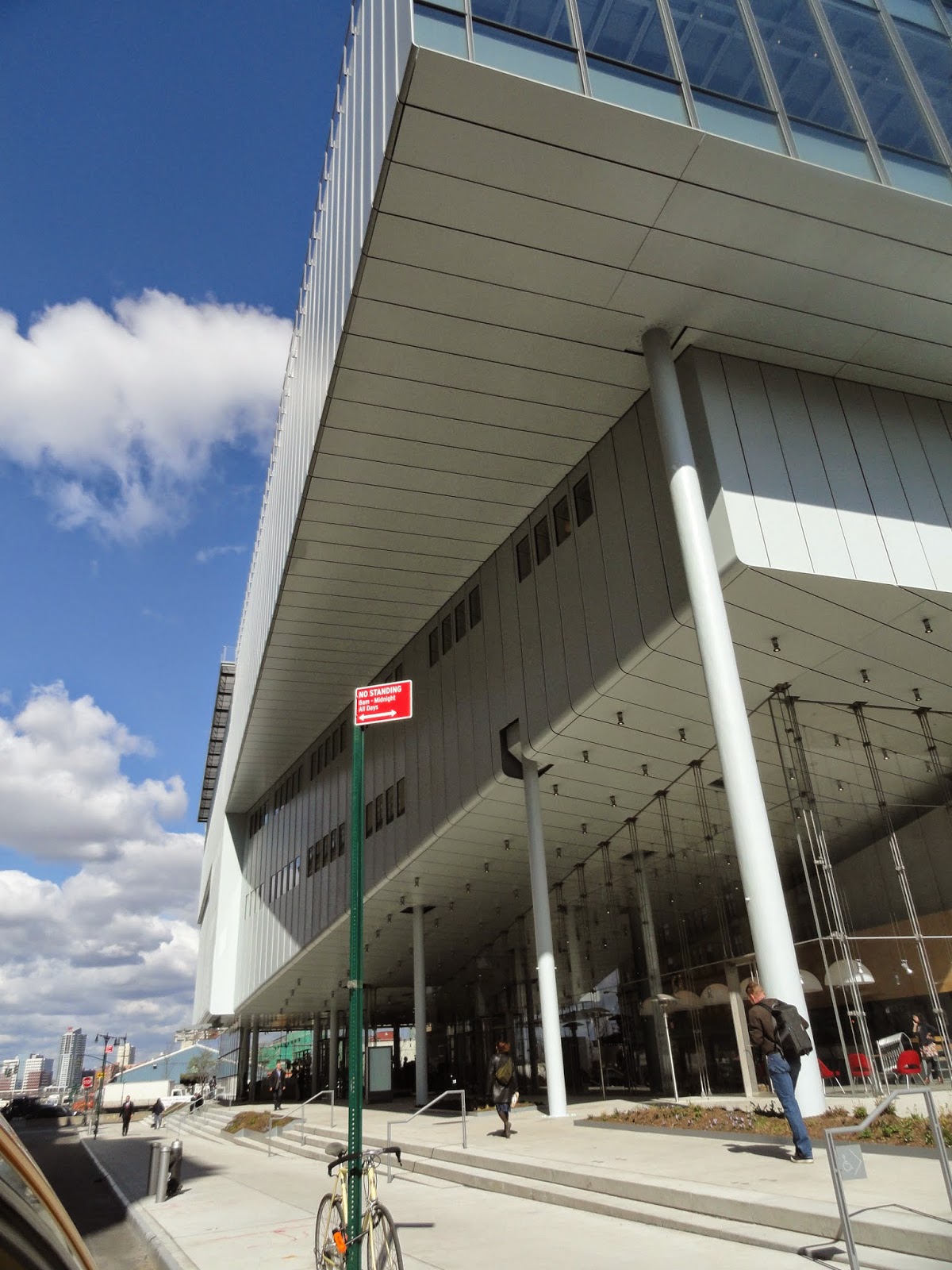 And today, Thursday, Michelle Obama came to cut the ribbon! 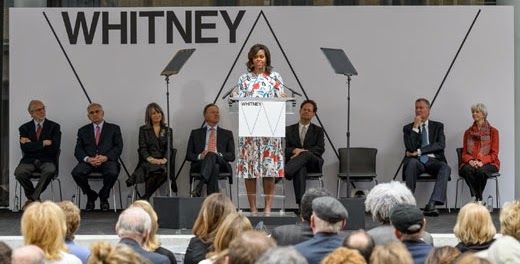 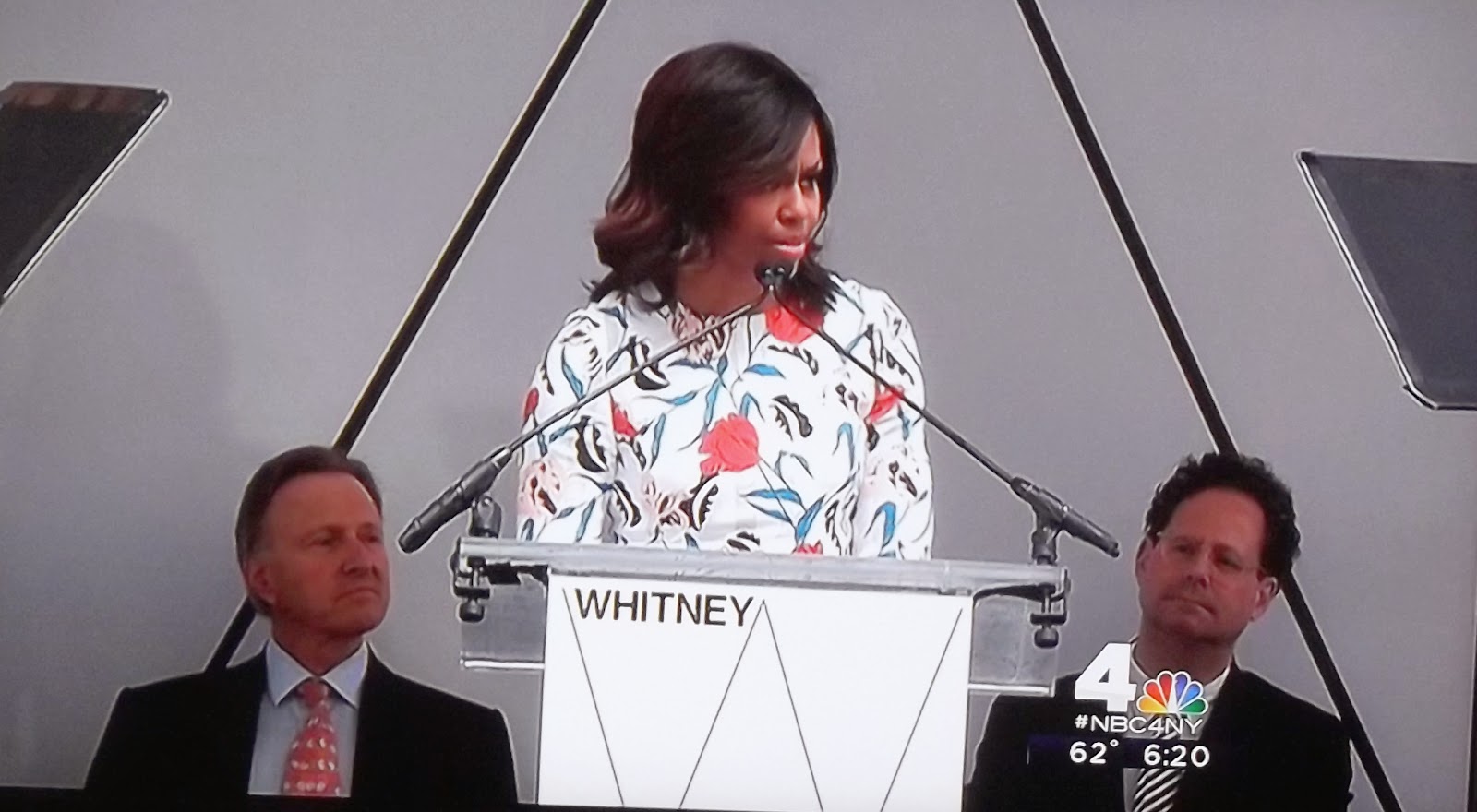