I am old enough to have been taken as a child to the 1951 FESTIVAL of BRITAIN in London. I remember it well - but whether we saw the exhibition Paintings for 51' where the 2 Roberts showed, I don't know. We did see lots of sculpture (my mother was a sculptor). I also saw Beryl Grey dance - that I remember. 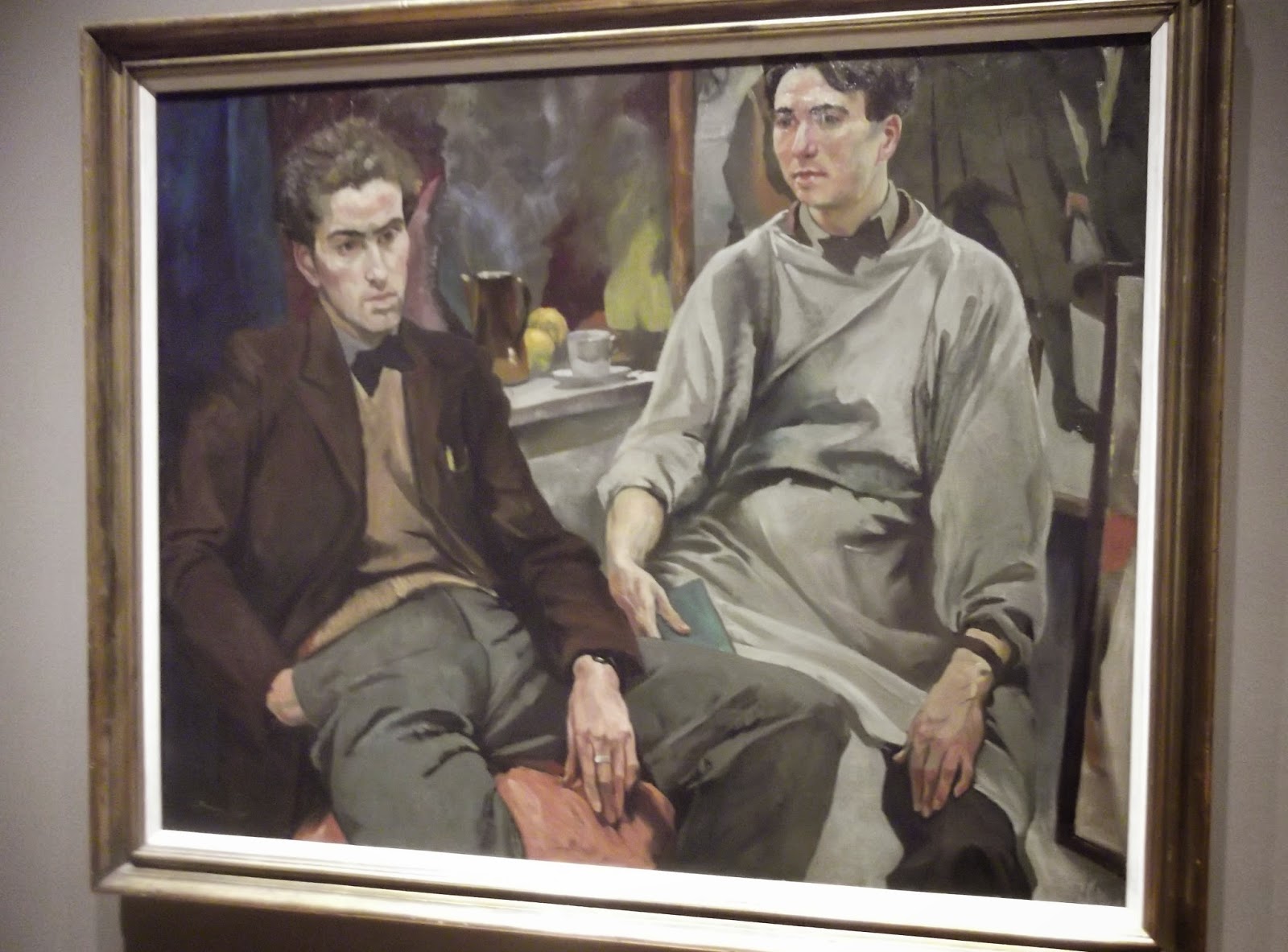 The 2 Roberts by their teacher Ian Fleming, 1937-8.
Reading Patrick Elliott's superb catalogue for ROBERT COLQUHOUN & ROBERT MacBRYDE at Edinburgh's Gallery of Modern Art reminded me of this, while the sombre, often murky greeny grey, ochre & brown tones of many pictures here are so familiar that they bring that difficult post-war era flooding back. 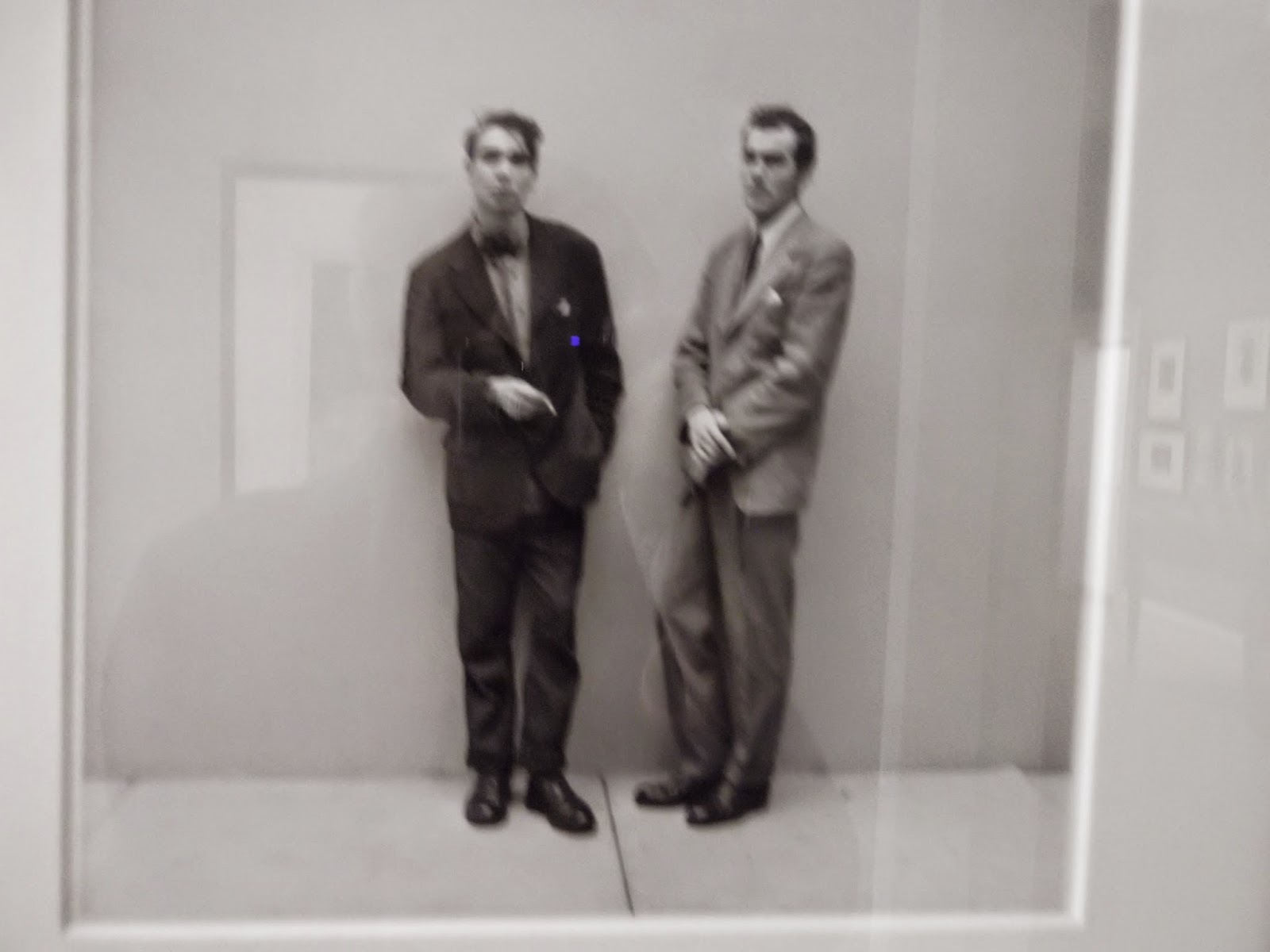 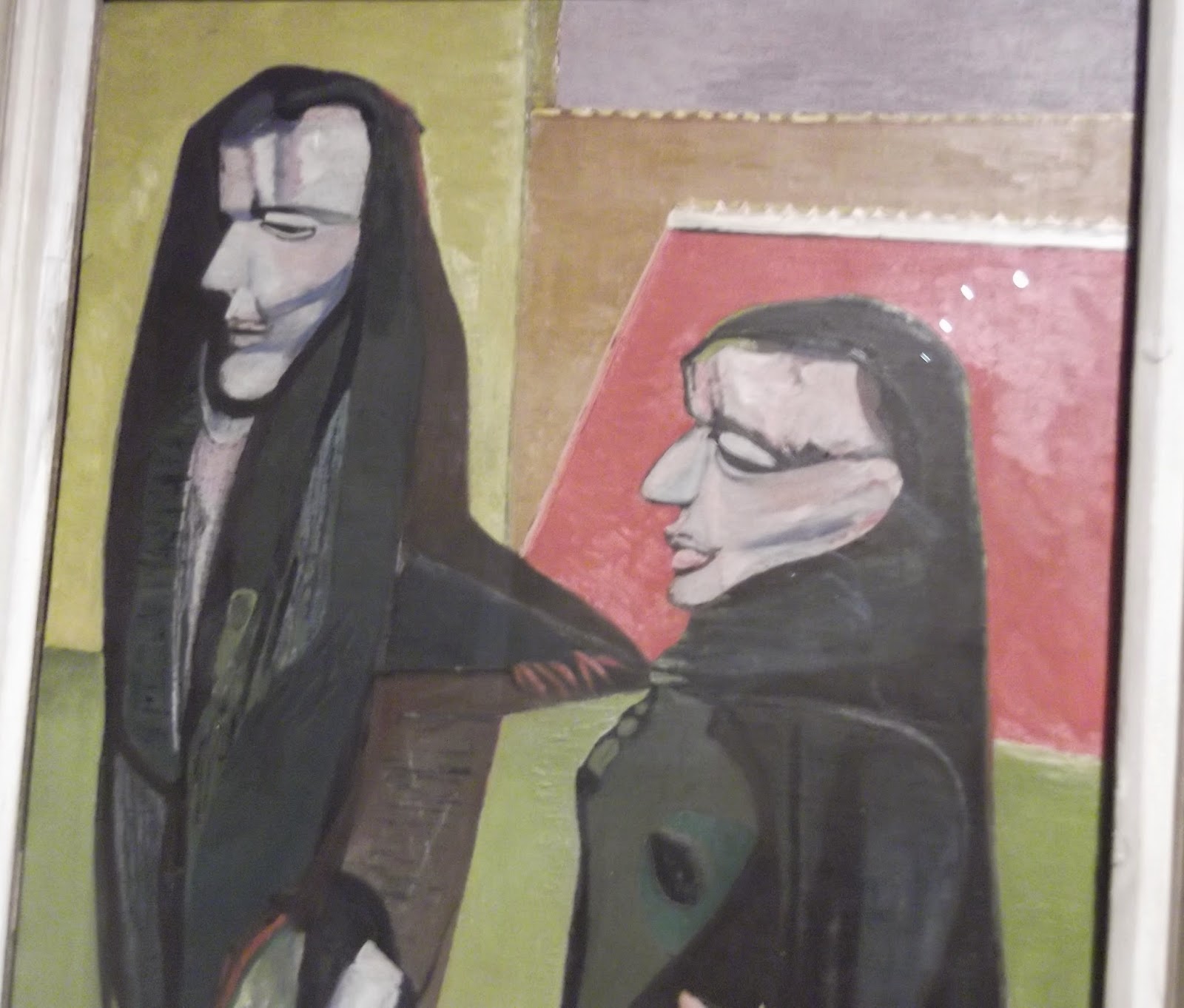 The second World War and 1950s post war years were anxious, dark & brooding times, even reflected in dress or curtain fabrics. It was as though the sun had disappeared & even oil paints & fabric dyes were mournful. I remember my mother eventually turning up to fetch me from primary school in a brightly coloured, full-skirted dress. I was astonished & remarked "You look funny" - which was not what she wanted to hear! It was the first time that rationing had allowed skirts to use anything but drab, skimpy material. 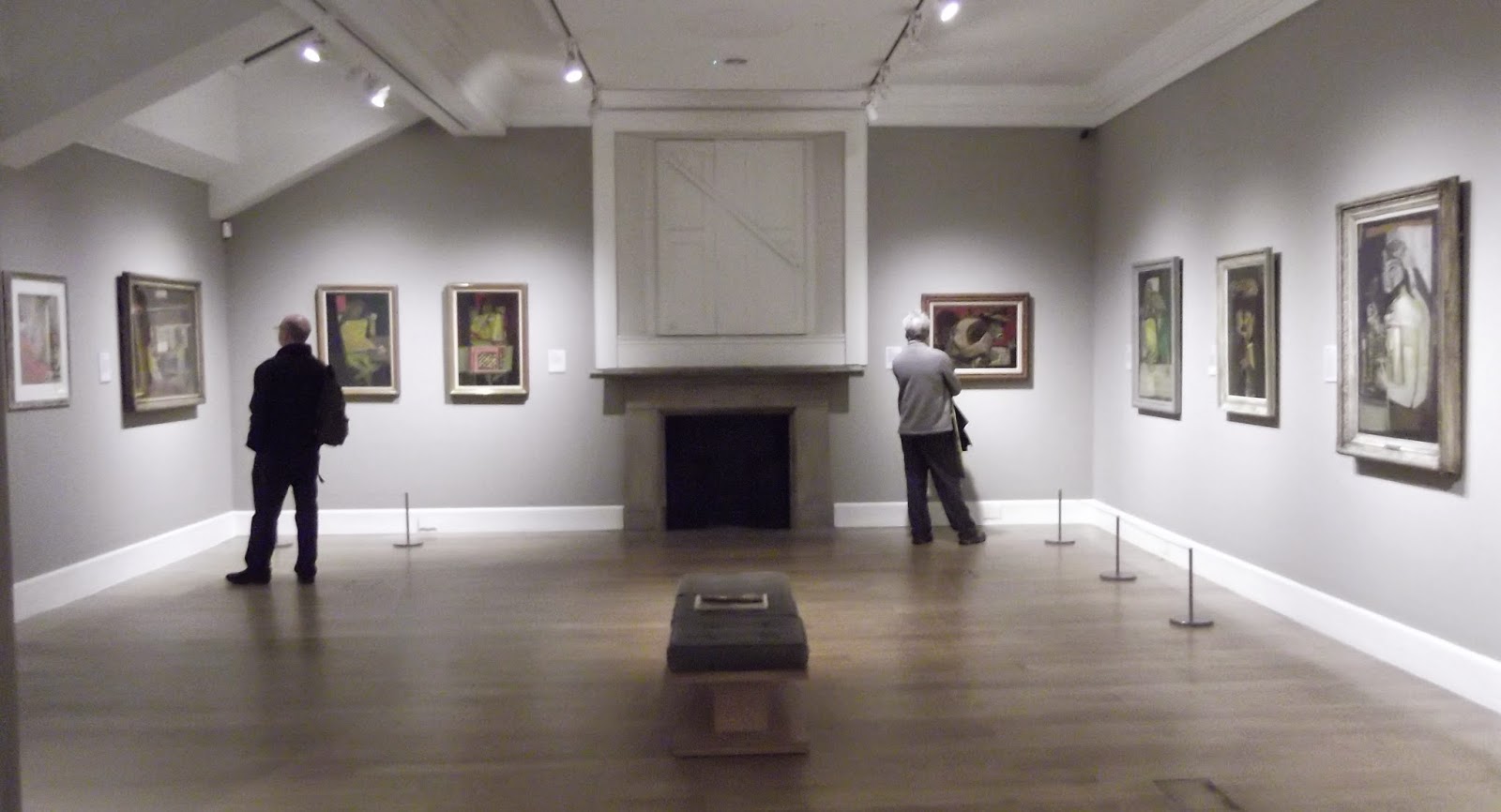 This major must-see show celebrates the 2 Roberts centenary. Yet it is a sad story. The pictures are not easy, for they present a tragic vision of humanity; a stark depiction of poverty and deprivation. Colquhoun's grieving, angular, hollow eyed figures are resigned yet noble. 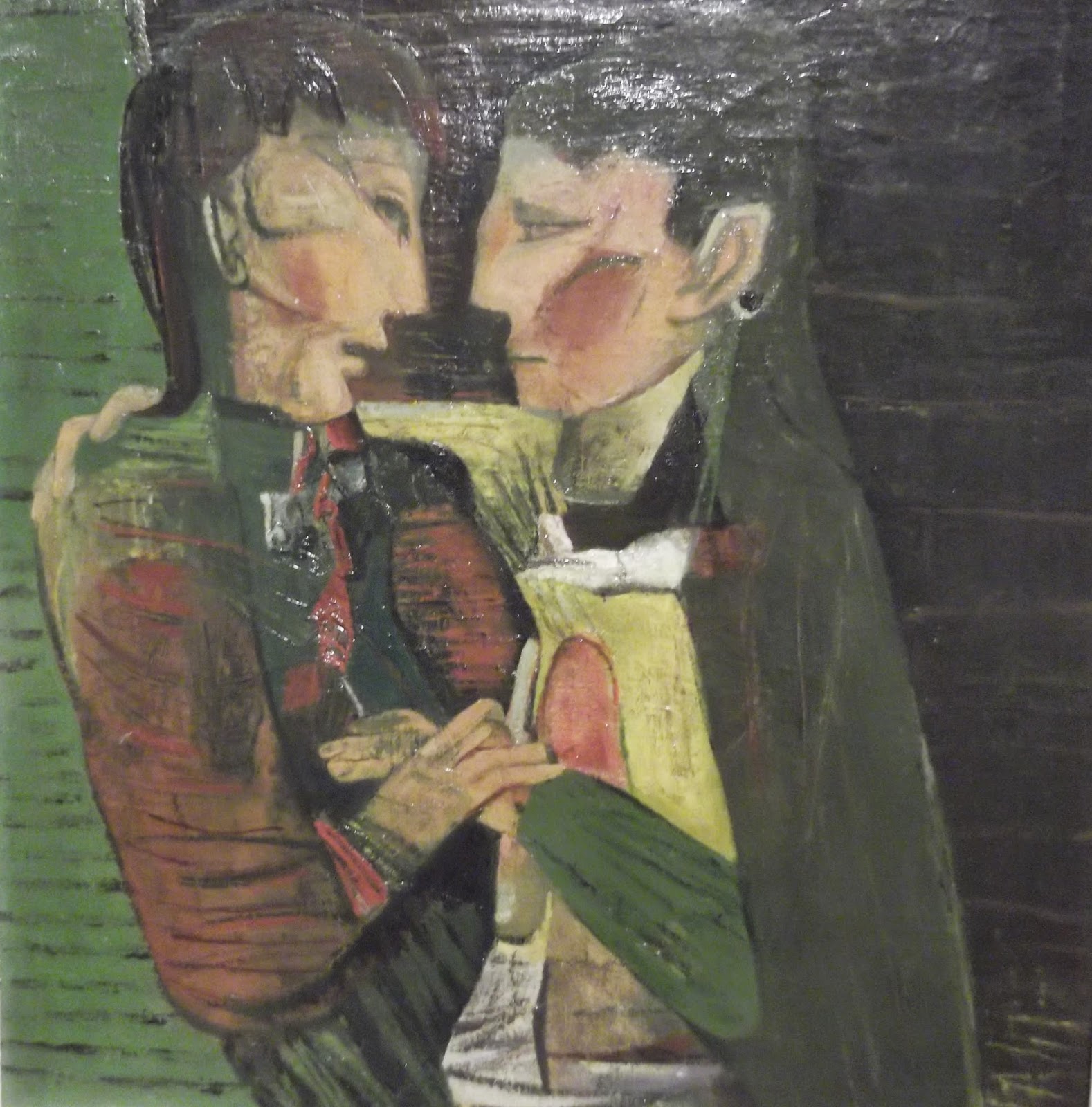 MacBryde, known for his still life paintings, does use more colour but together with ominous shadows & black outlines. Cubist in influence, both painters absorbed much from their early European trips, with Colquhoun's broken up figures reminiscent of Jankel Adler and Picasso. 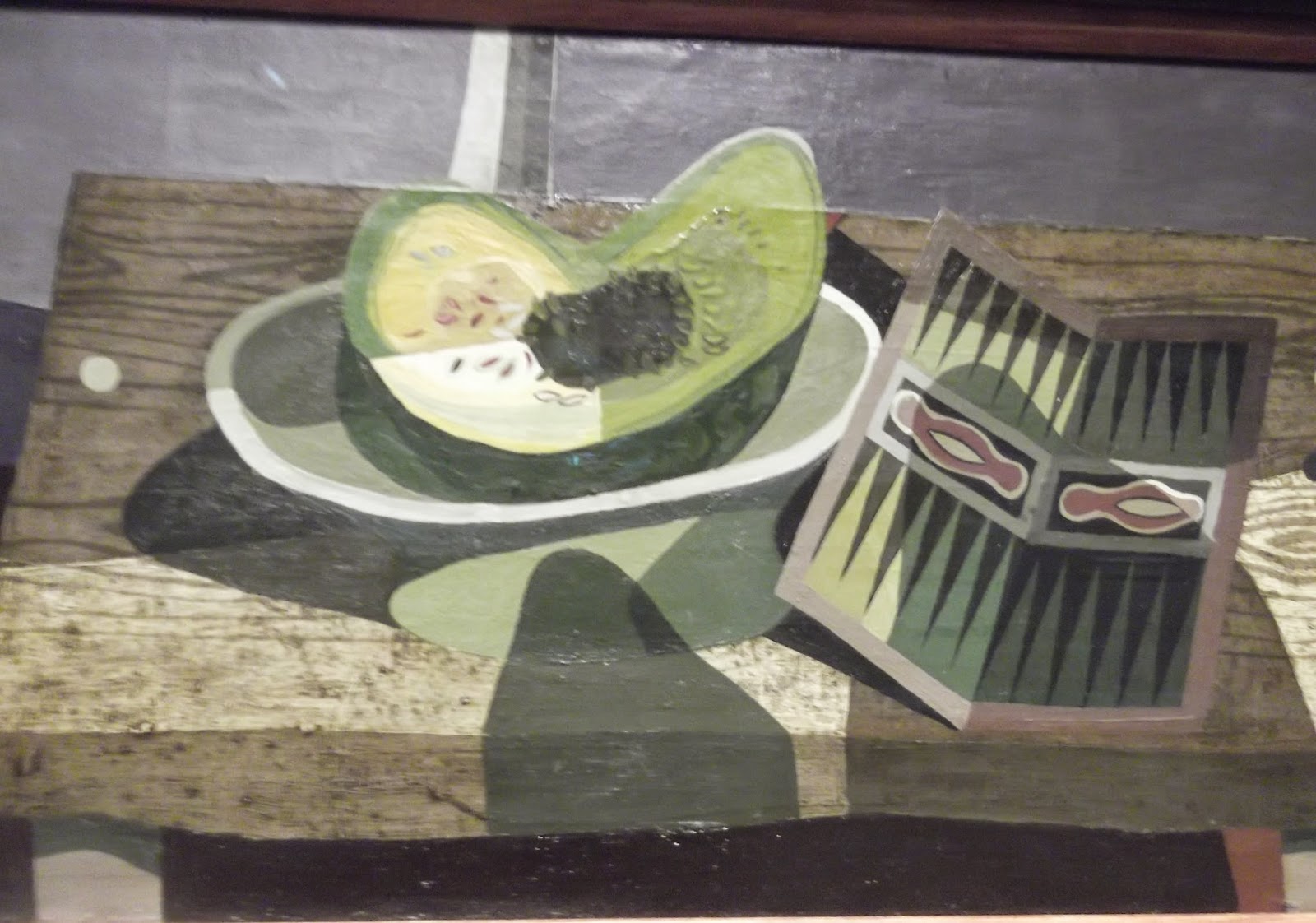 Colquhoun specialised in figure painting, MacBryde in still-life, and was often in Colquhoun's shadow. Hard drinking, volatile and uncompromising, their lives were as passionate and compelling as their art.
In 1948 New York's Museum of Modern Art & the Tate acquired paintings.  By 1950 they were among the most famous artists working in Britain. 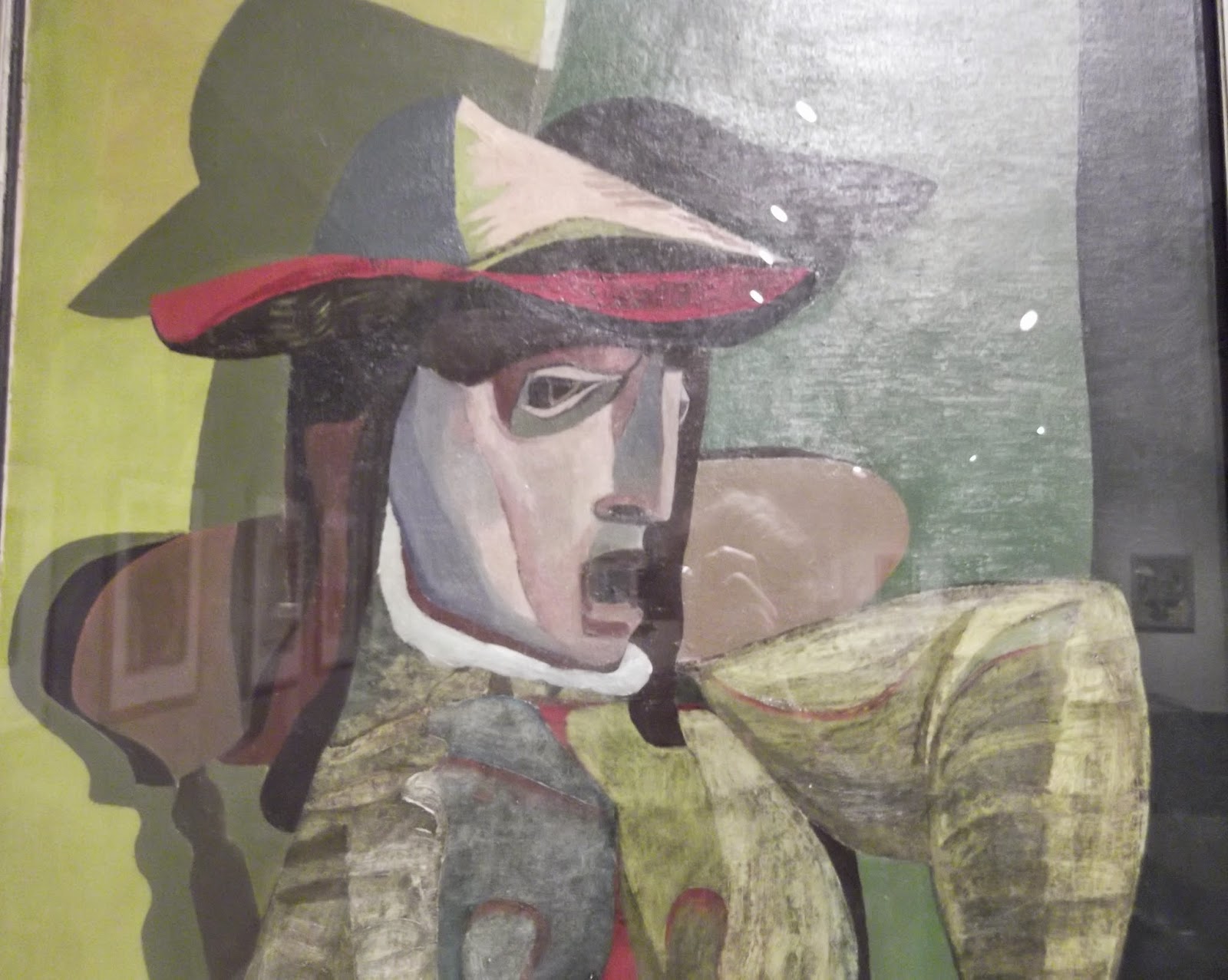 While the 1940s took them from obscurity to stardom, in the 1950s they descended into penury and alcoholism, with no permanent home, living on charity from friends. As a gay couple when this was illegal (till 1967 in England; 1980 in Scotland) they had been lucky to fall on their feet in 1941 in London among the bohemian Soho crowd, but that also involved a great deal of drinking too, which became their downfall. 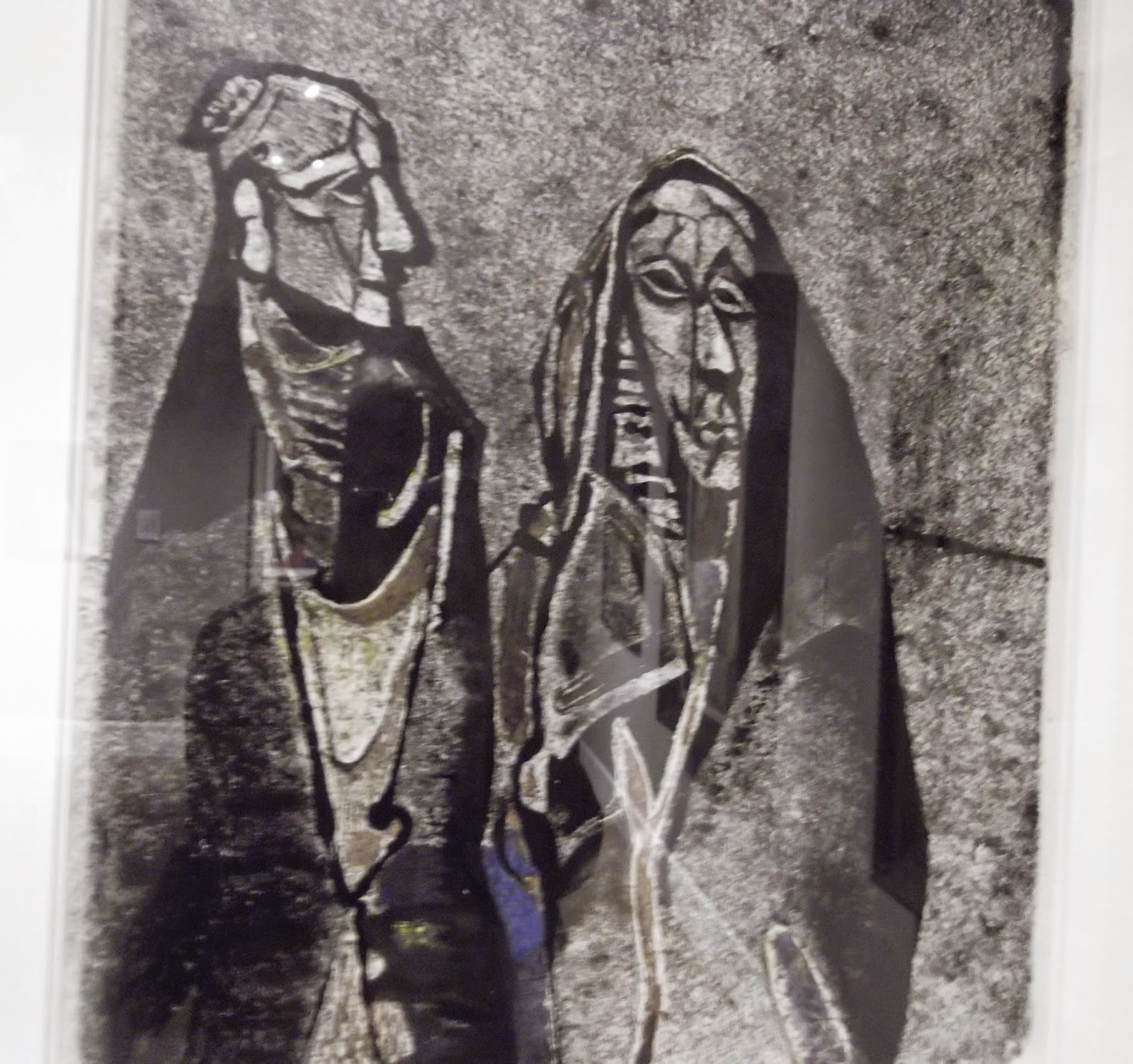 Elliott's off repeated phrase, "Nothing came of it" is telling. Commissions, exhibitions, requests for illustrations, pictures, theatre designs, nothing came of them. What a waste of huge talent- but then drink is a very Scottish problem.

Moreover as abstraction and New York expressionist exuberance (for the US had not endured a war) became the dominant force, these tough, gritty, subdued "ultra-modern" images were no longer wanted.

Both artists hailed from Ayrshire and met at Glasgow School of Art in 1933 where their superb draughtsmanship soon brought them travelling scholarships to Paris where in 1939, they inevitably saw Picasso's work before going on to Rome reporting "it was full of soldiers." 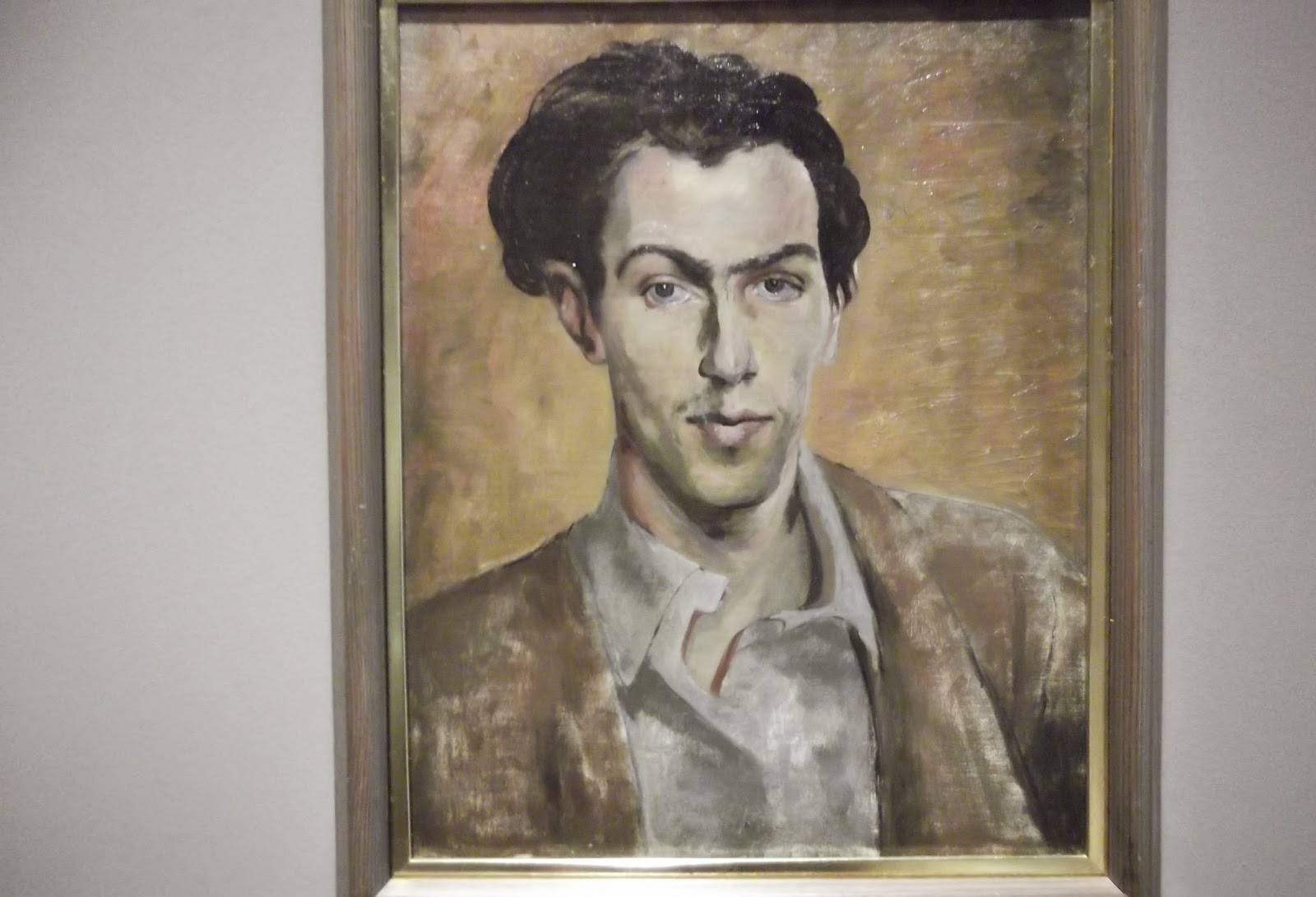 Colquhoun Self Portrait 1940
During the war Colquhoun, handsome, charismatic, but melancholy by nature, drove an ambulance which may have influenced his vision of tense, emaciated, suffering mankind. Having experienced the Depression too, his whole approach to life was less upbeat than MacBryde's. Texture was important to both, animals often appear in Colquhoun's work, which frequently has an autobiographical slant. His pairs of figures, even when female, often resemble the 2 of them. 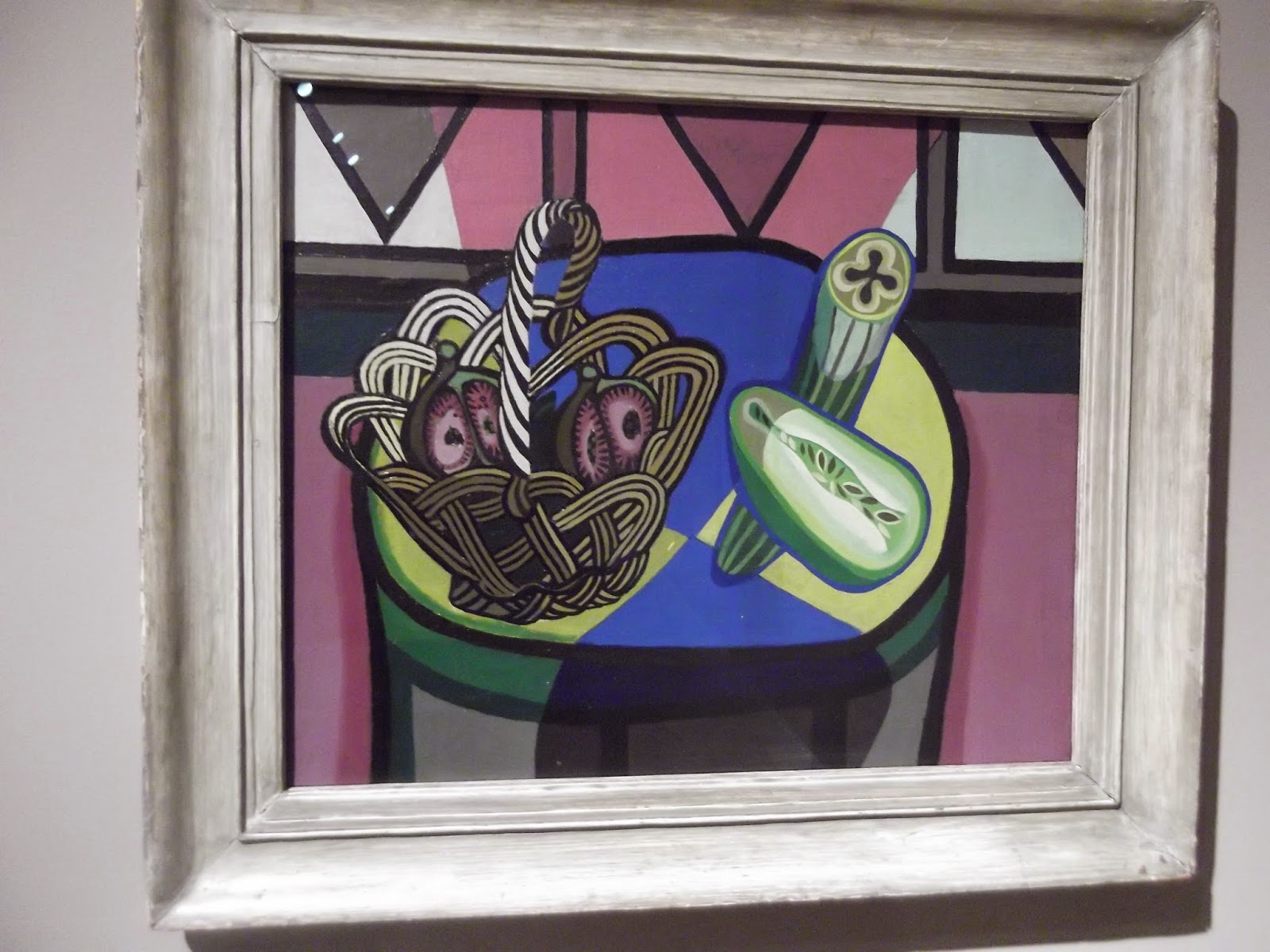 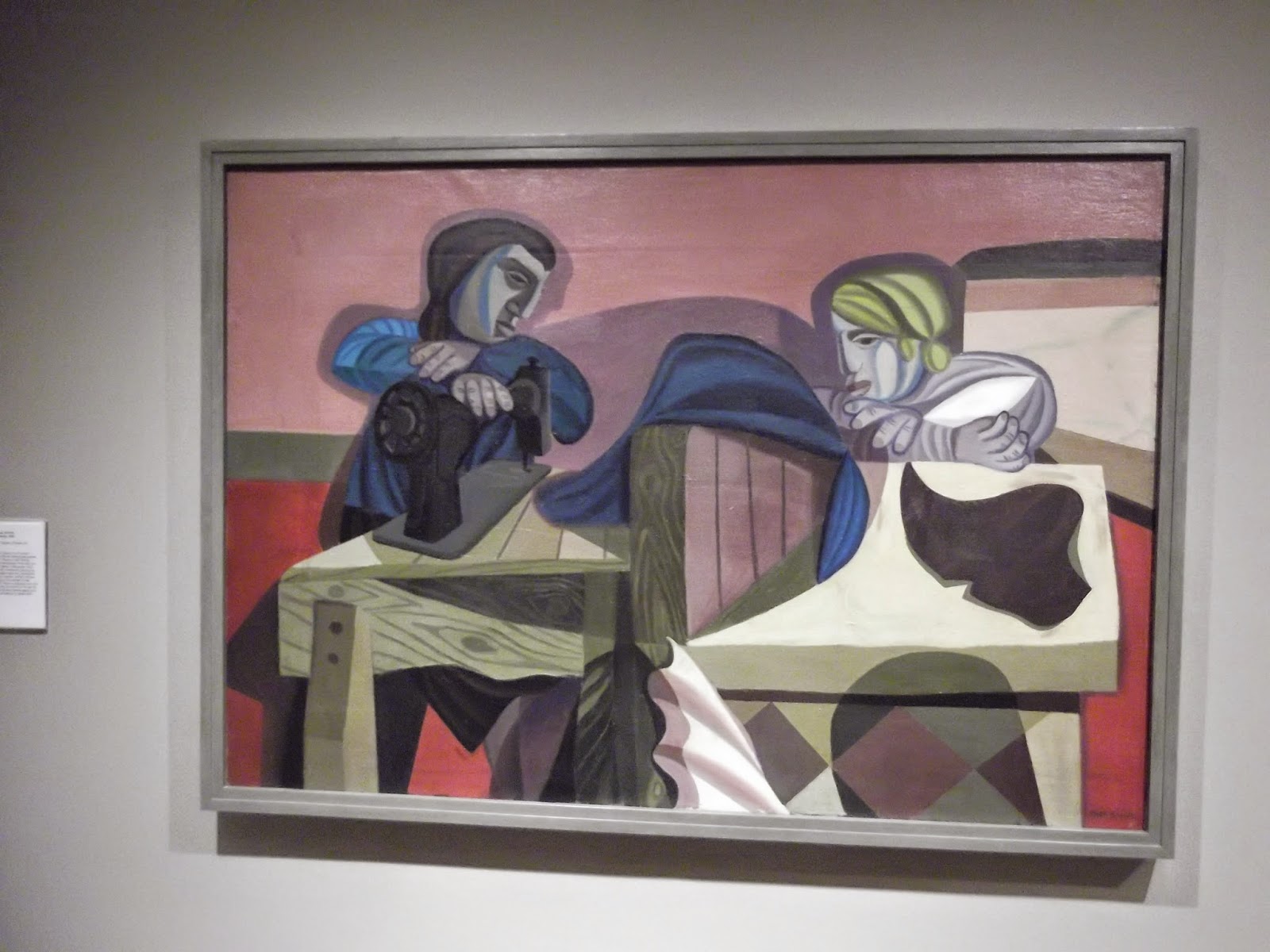 Two women sewing 1953 by MacBryde for Coronation Year exh at the Tate.
The catalogue ends with a wonderful essay by Davy Brown on Colquhoun's monotypes. Any printmaker will be enthralled by this informed, fascinating look at these powerful graphic works. 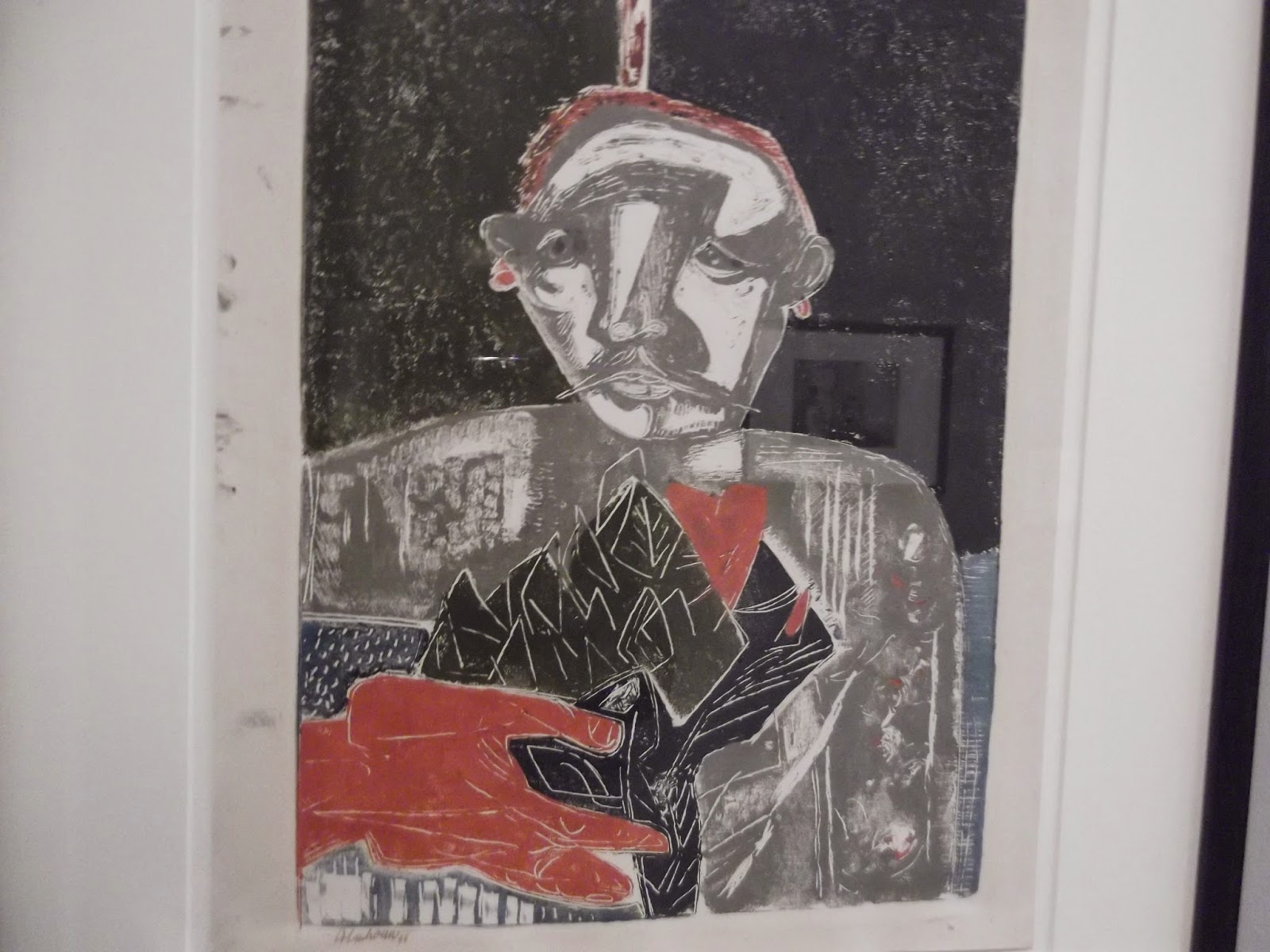 The Gardener, 1948, monotype by Colquhoun


The TWO ROBERTS runs till May 24th.