New York NEW YORK. Blue skies but gridlock everywhere when Obama's in town along with 100 heads of state at the United Nations.  Streets sealed off. Police everywhere. But an ideal time to view public sculpture as your taxi creeps along Park Avenue or Broadway. 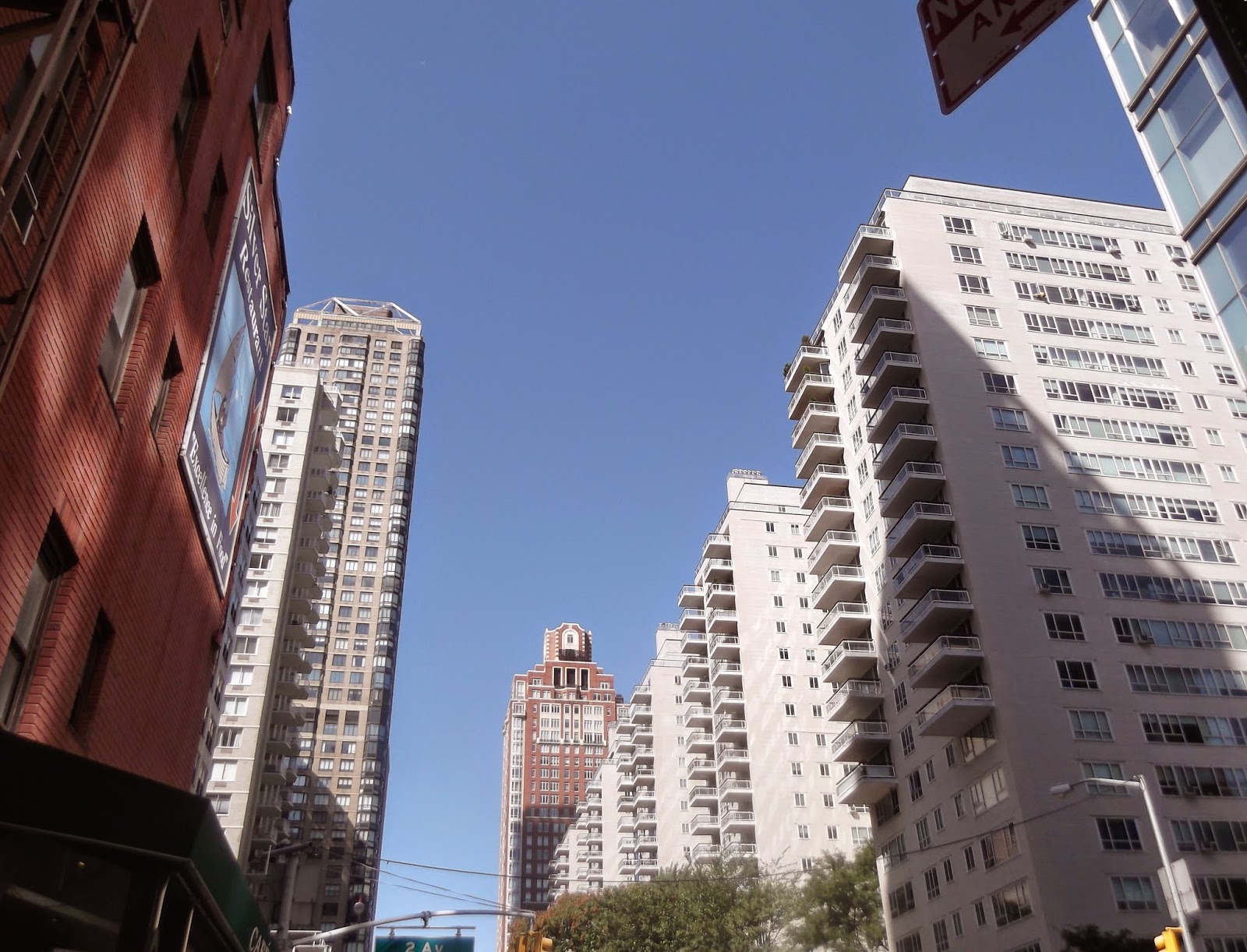 This Spring Alice Aycock made a very impressive display of super steel tornados, twisters, whirlwinds, & spinning tops racing down Park Avenue, which is after all, she said, "New York’s symbolic canyon of money, power & aspiration." 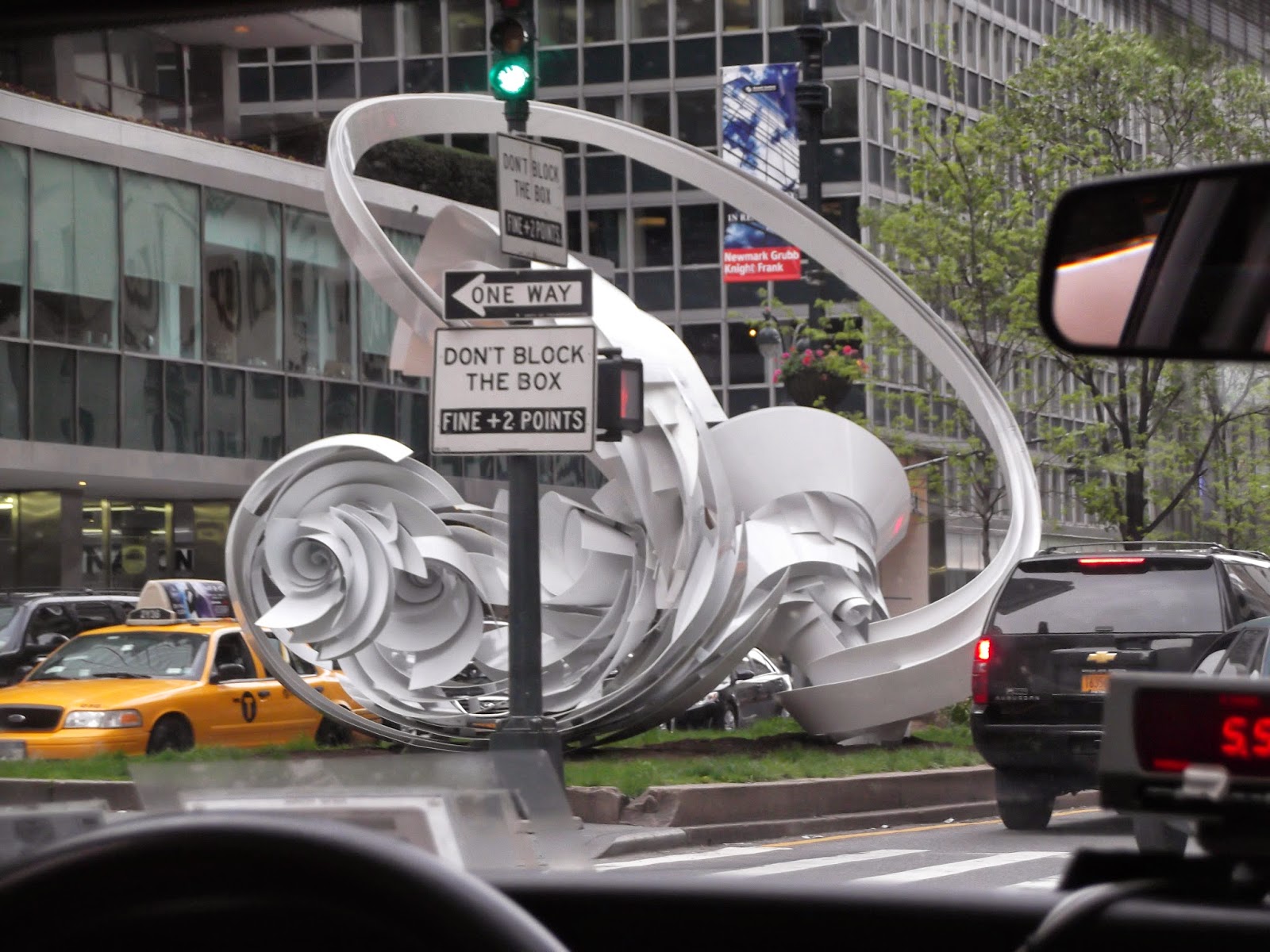 Aycock is now followed by Ewerdt Hilgemann’s whose shiny steel sculptures, between 8-20 feet tall, are made by vacuuming the air out of welded-steel cubes or rectangles, using pumps or simply water, to create iconic “Implosion” pieces. 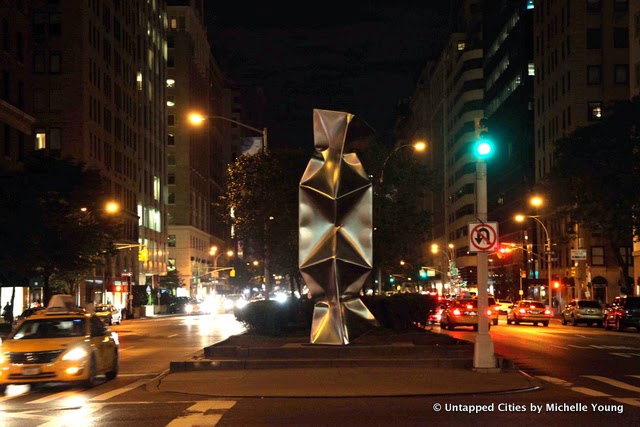 Seven now grace Park Avenue from 52nd to 67th Street. It's Hilgemann’s first major exhibition in the United States, appropraiate in that he was a student of the cofounder of Germany’s ZERO group in the 1960s, which will get its own retrospective at the Guggenheim in October. In addition to totally cubic forms, Hilgemann has created Cube Flower, a disarticulated floral study, in front of the Seagram Building. (Till Nov 7th.) 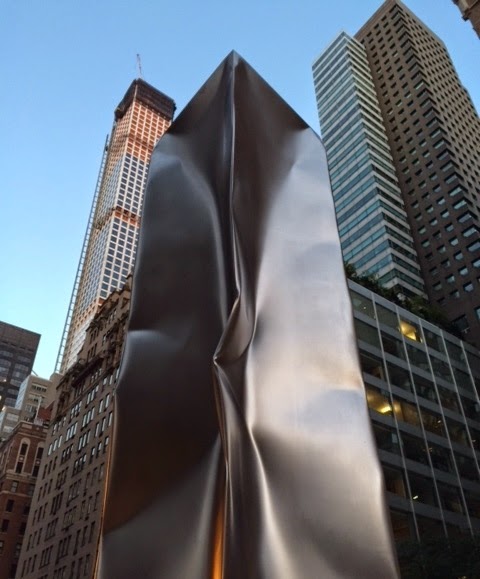 Many of Hilgemann's works, he says, reference the minimalism of Piet Mondrian whom Hilgemann admires. “Mondrian tried to become part of American society & New York by painting in a minimalistic way,” he explains. “But with Broadway Boogie Woogie, he painted himself into the structure of New York. I want to do the same with sculpture.”
Which brings us to Broadway Morey Boogie" curated by Max Levai, son of Marlbrough's Pierre. Broadway is usually reserved for solo shows, but here is a group selling show of ten disparate mid career artists, all based in America. 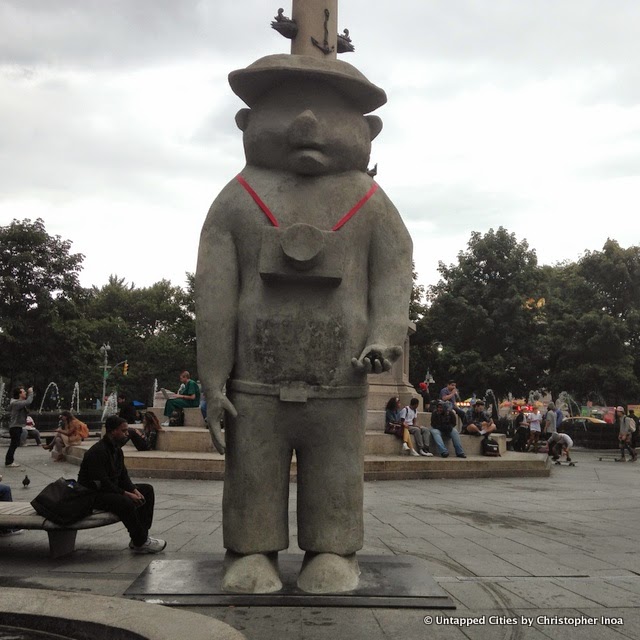 It begins well with a huge 2 ton concrete Bear as tourist complete with camera on red cord around its neck. Sited on busy Columbus Circle, it's by Polish-born, Brooklyn based Joanna Malinowska. 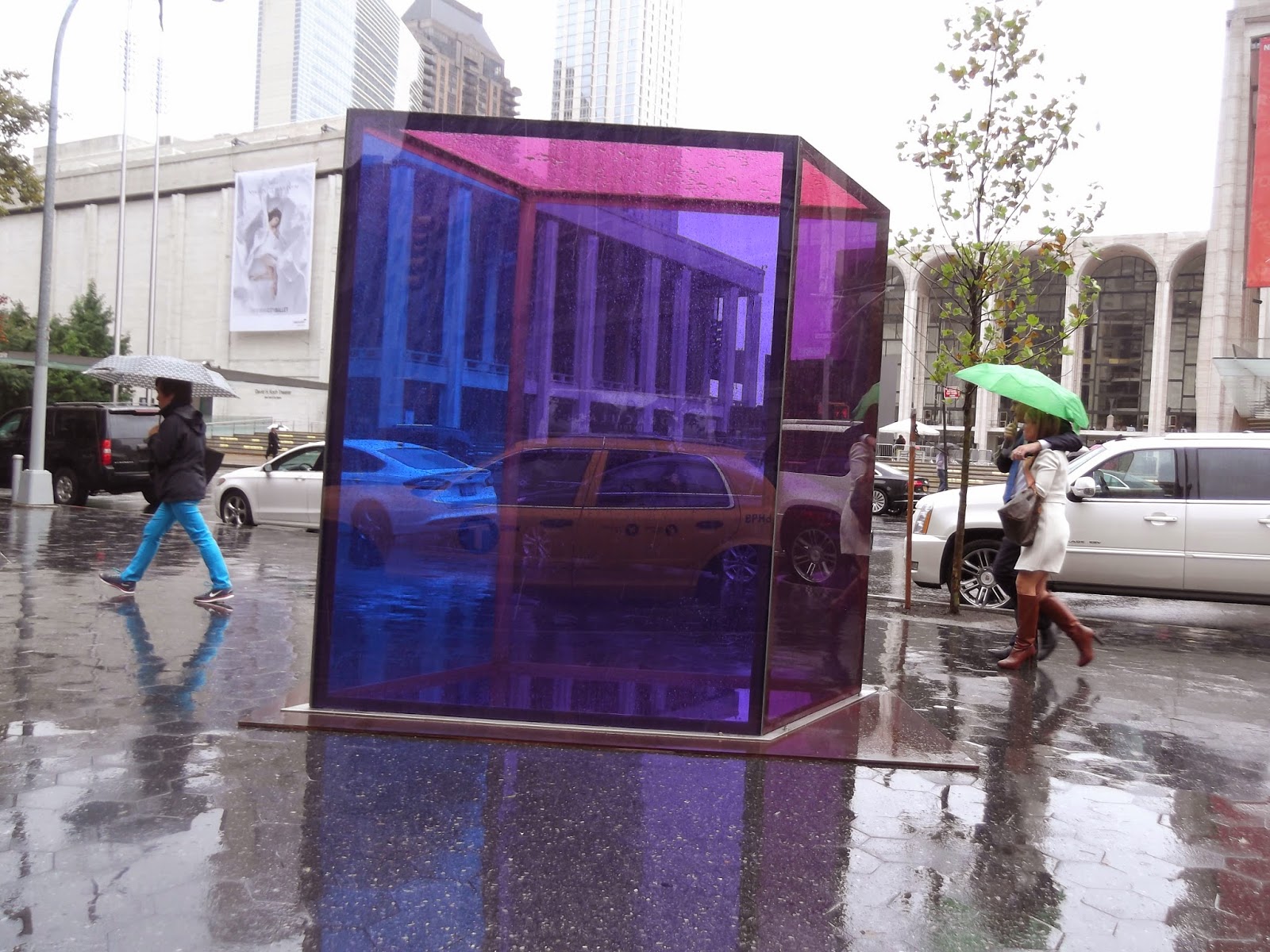 Next, at 64th St by the Lincoln Center, is Sara Braman's 8ft coloured glass cubic shape, which works amazingly well in rain as well as sun. 72nd St is truly disappointing with 2 flat figures far too subtle in colour & form for the location. They completely fade into the background.In fact all the sculptures are hard to see, hard to find. I went looking for Tony Matelli's dog & despite asking at cafes, hotels and shops, no-one could help. Indeed no-one knew anything about these Broadway sculptures at all! Next is a big white ball - but not big enough - in the colours of Con Ed, the ubiquitous NYC electricity supplier. 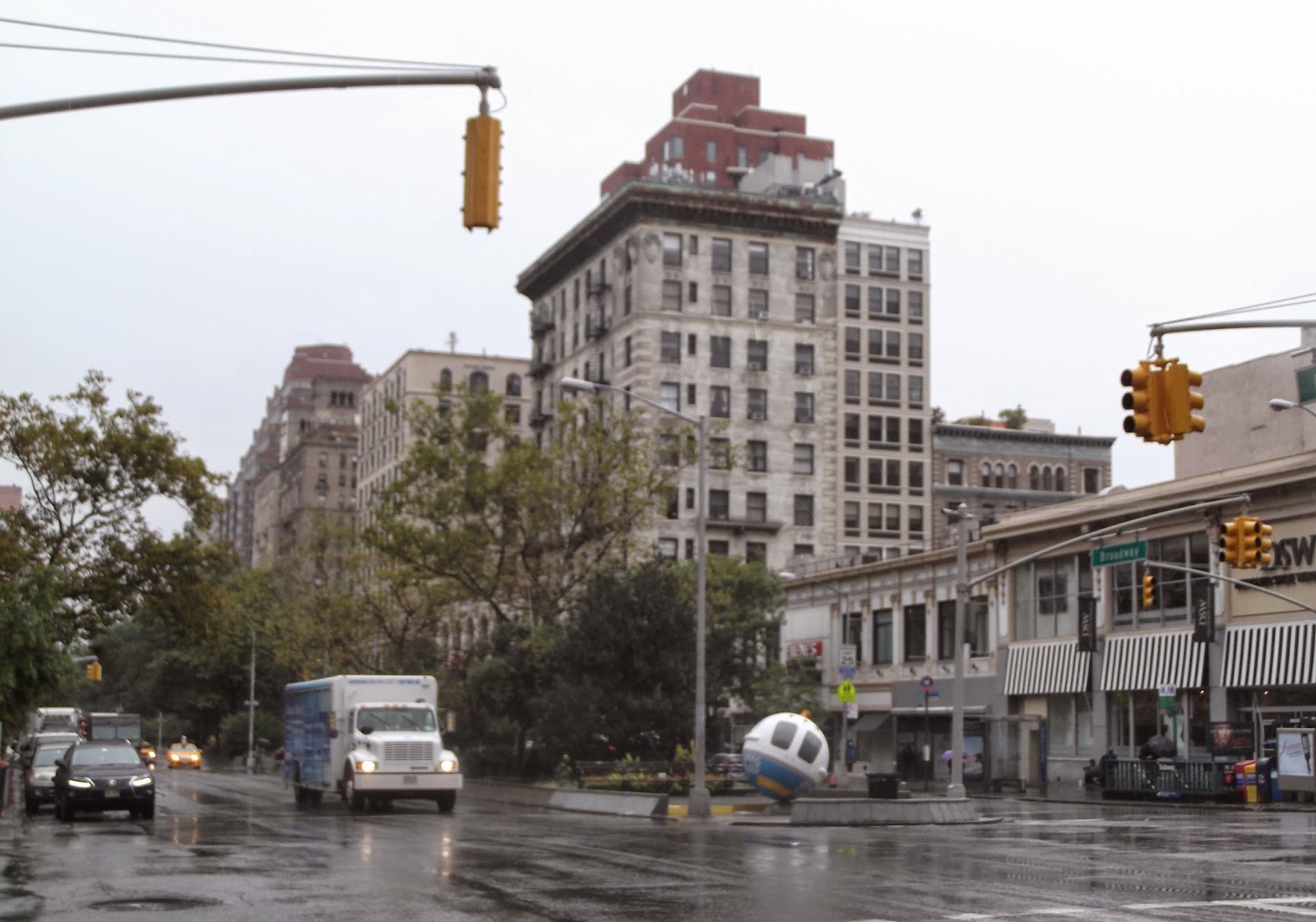 We gave up here, but from photos of the remaining 5 pieces, it seems an uninspired array. Altogether too small scale. Public sculpture is a hard task
master.

At the center of this virtual world is a tower surrounded by 10,000 mirrors that adjust their positions according to the location of the sun & reflect light upon the tower to generate electricity. The digital simulation changes in real time throughout the day, so no specific view  will be the same over the course of the exhibition. His first major public art work in the U.S. also marks John Gerrard's most ambitious work to date. MUSEUM OF ART & DESIGN, Columbus Circle NY

I first got to know Edward Durrell Stone's famous lollipop building in 1982 & 83 when I curated New Scottish Prints as part - the only outside London part - of the Britain Salutes New York extravaganza which also featured Constable at the Met & Henry Moore along Park Avenue. 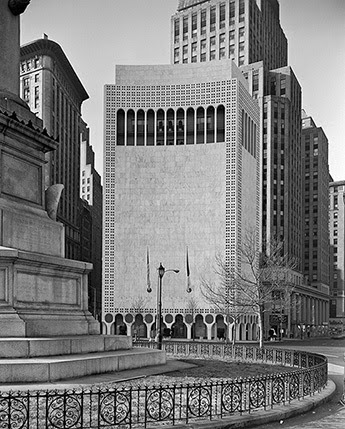 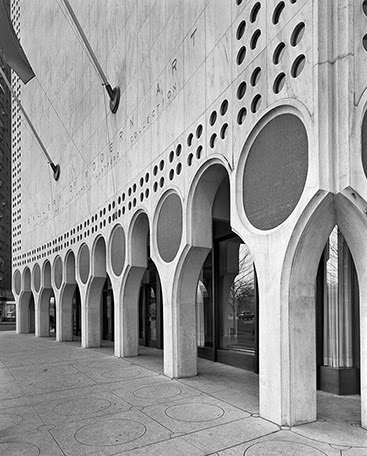 The building, at busy Columbus Circle at the corner of Central Park & the Lincoln Center, was one of New York's few memorable & idiosyncratic structures, "a die-cut Venetian palazzo on lollipops."   I loved it on first sight. My room at the  Empire Hotel (or Vampire Hotel as taxi drivers loved to call it) was right there. In my innocence I had no idea how central it all was.
The Scottish exhibition, which featured the young Bellany, Donald, Blackadder, Fisher, Watson et al travelled by sea & got lost on the docks! Found just in time before the Arts Minister, Ambassador etc came by.

Today the same building, now home to The Museum of Art & Design, is OK inside, but the exterior has been ruined. I hate it. Efforts by the world's top conservation bodies from 2003-5 to save this landmark failed, & the MAD Museum took over. How could they!

But it does have a good restaurant! Today we enjoyed the amazing view up Broadway, across Central Park's greenery and down to Columbus on his pillar, + Malinoska's Bear. The restaurant ceiling, with shocking pink and orange, also plays its part. 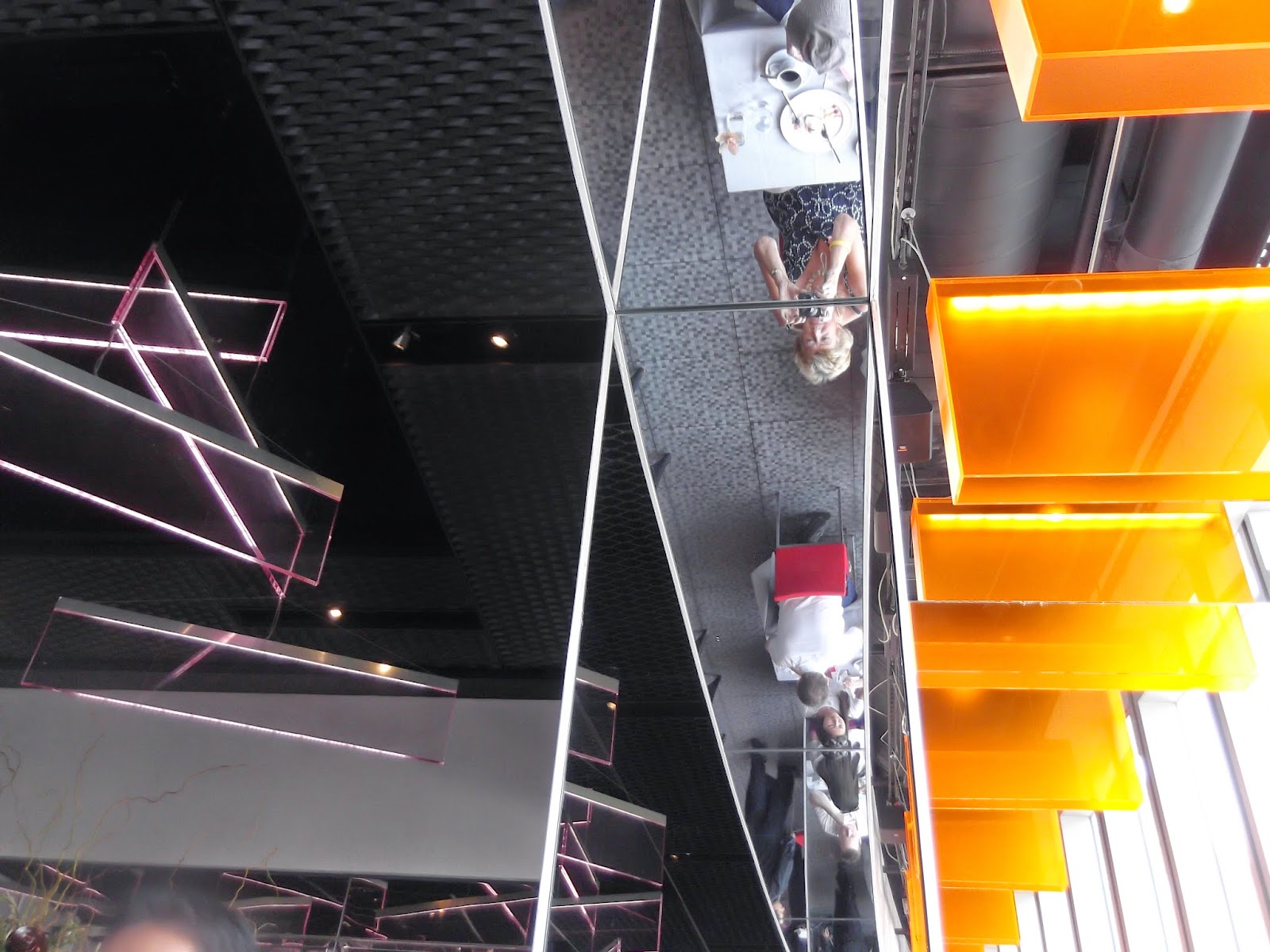 Downstairs 2 shows address past & future. Mrs Webb who founded the MAD museum in 1956 on West 53rd St, was rich & driven. From 1939 on she set up cooperatives & craft councils, exhibitions & surveys, all from the premise that "independent living could be attained through craftsmanship." This section shows key works in silver, ceramic, wool, textiles, wood & glass, many from the 1960s, including Anni Albers' weaving, Jack Larsen's panel & Hiroshi Suzuki's silver bowl. Stylish, elegant, beautifully executed. Archival photos fill it out. 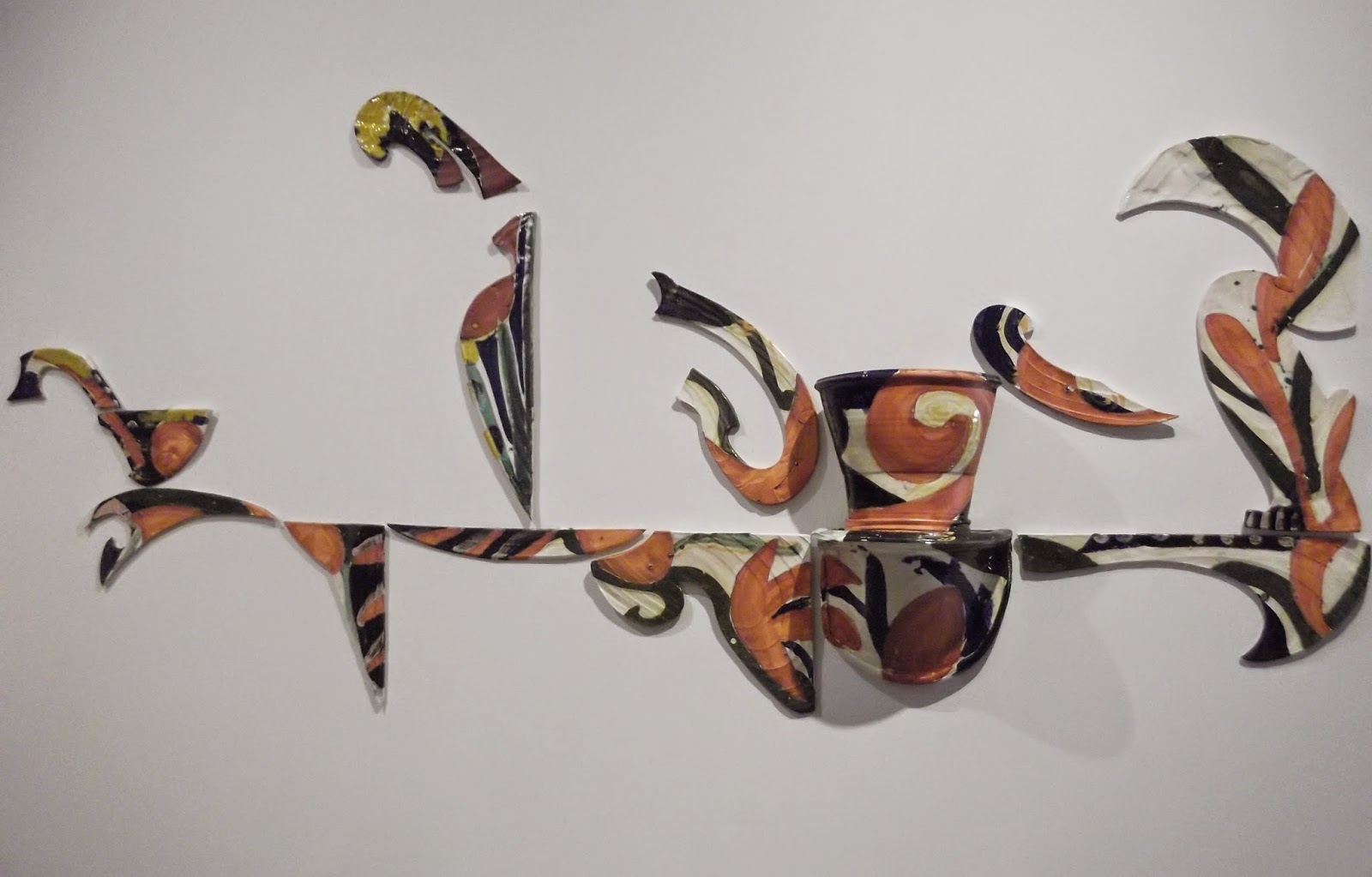 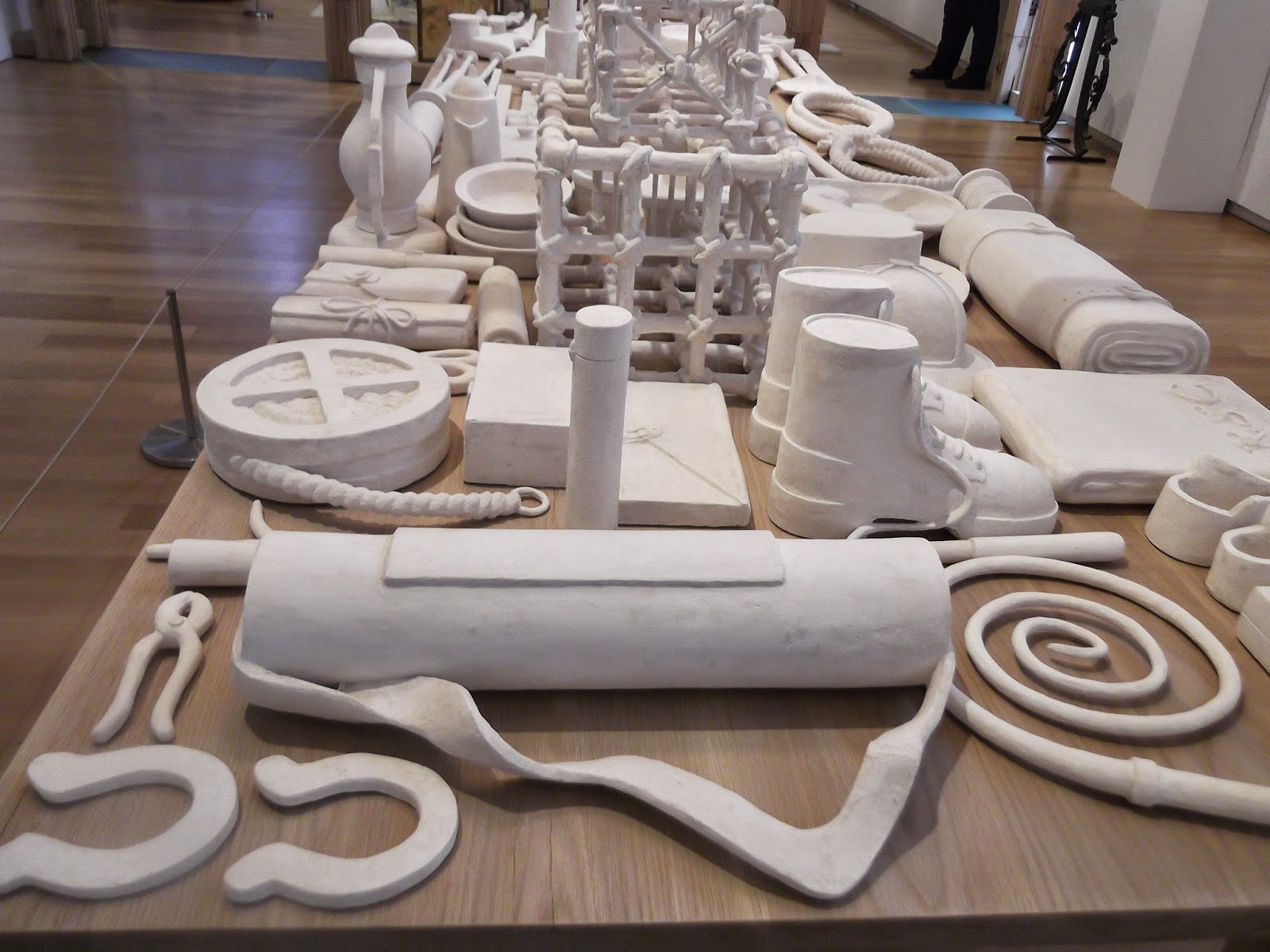 By chance the Met's THOMAS STRUTH show includes his 1978 b & w photo of Stone's building, together with his more recent large scale colour prints. 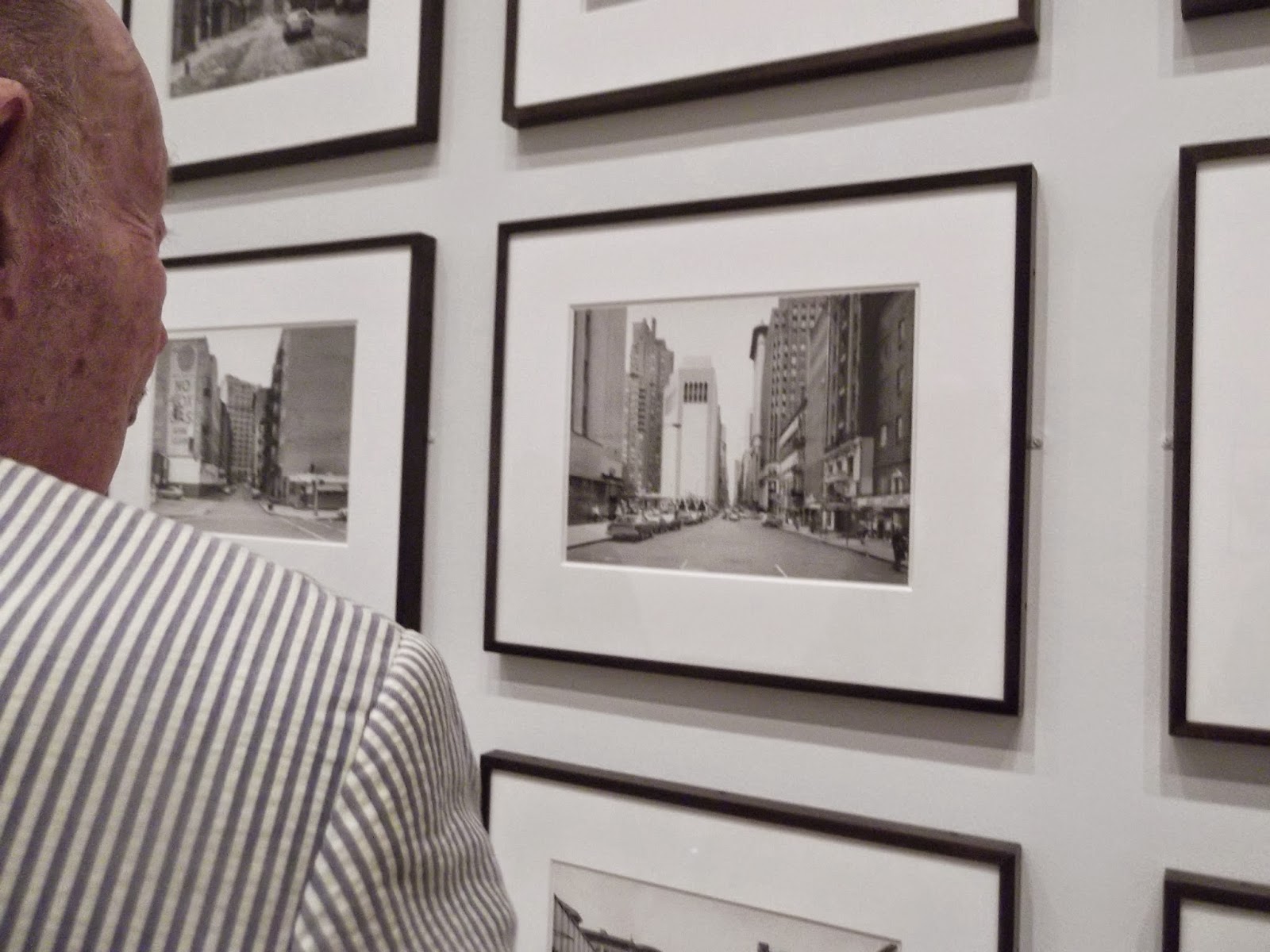 Milan Cathedral facade is awe inspiring in its breadth & detail; Giles Robertson, Edinburgh 1987 intimate, brooding. It's a small show but gives an idea of his range. Especially memorable is the Rome image: tiny figures dwarfed by vast architecture. It's all about looking. 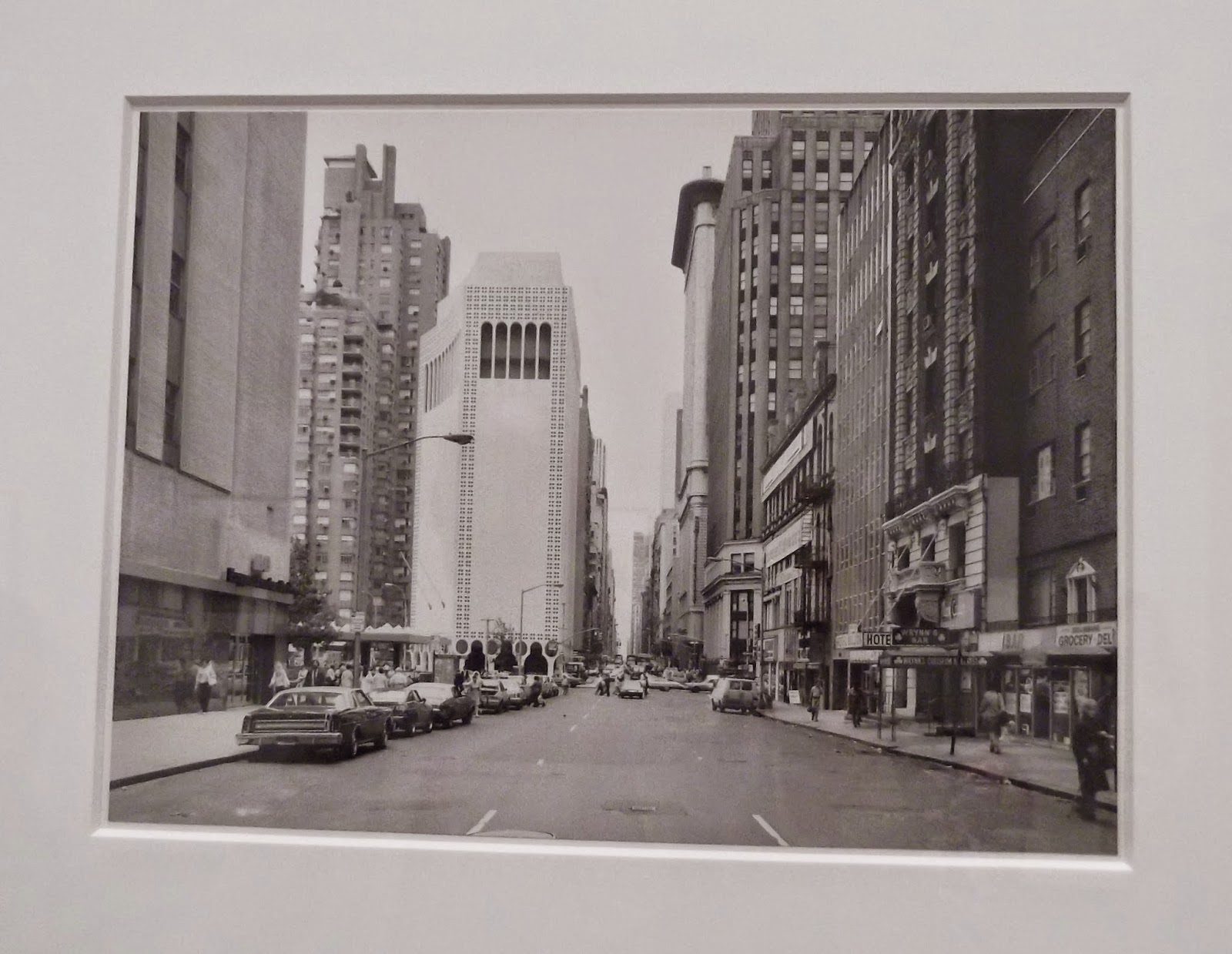 The Met is so huge that it can launch 3 or 4 new shows in a day. It's also a long 4 block inside walk from 81St entrance to the American wing. But worth it to see Thomas Hart BENTON's epic 1931 mural, America Today. 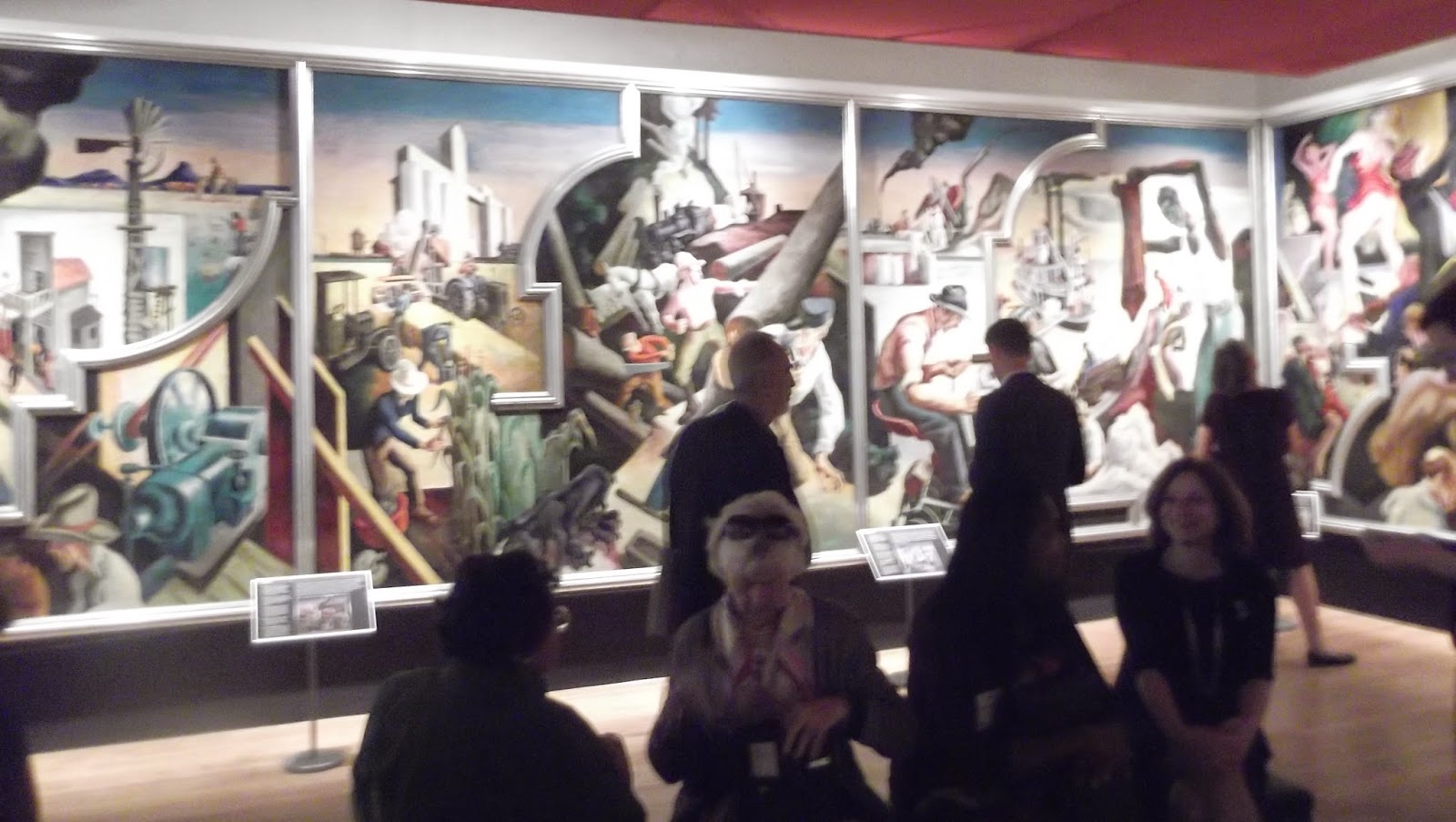 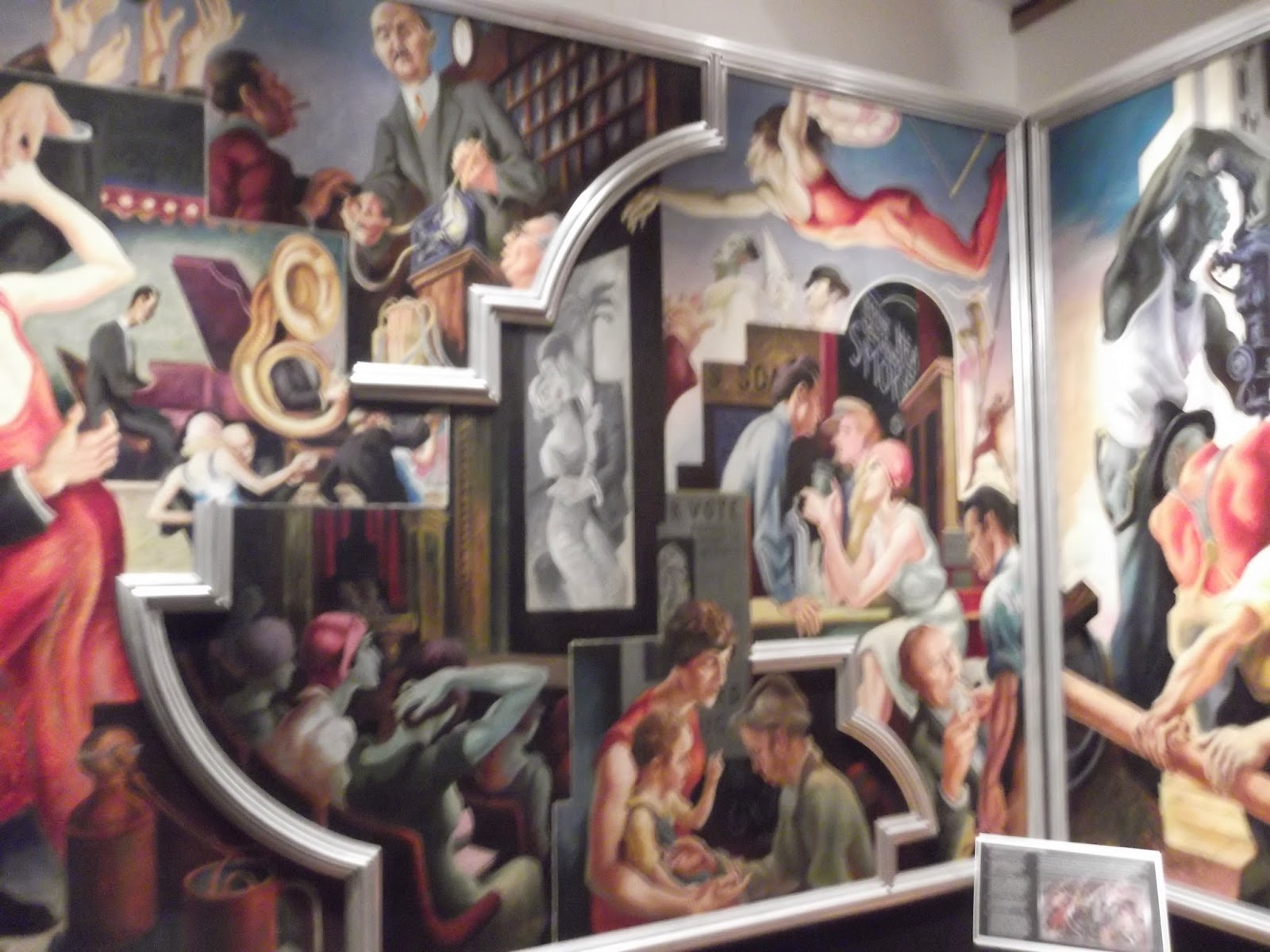 He was a great draughtsman & the show includes many terrific sketches. Benton's student, Jackson Pollock, posed for some figures; his wife & child for others. 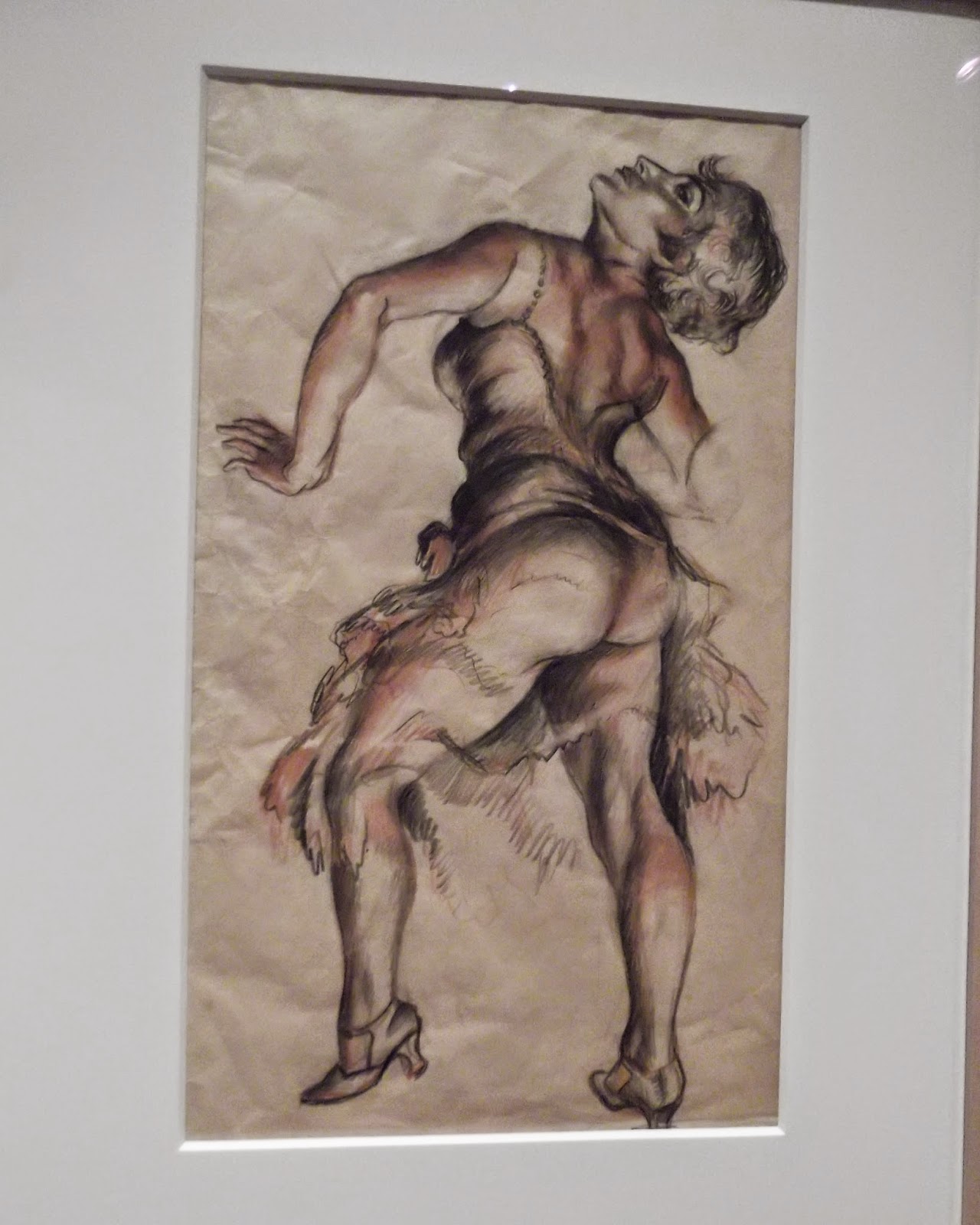 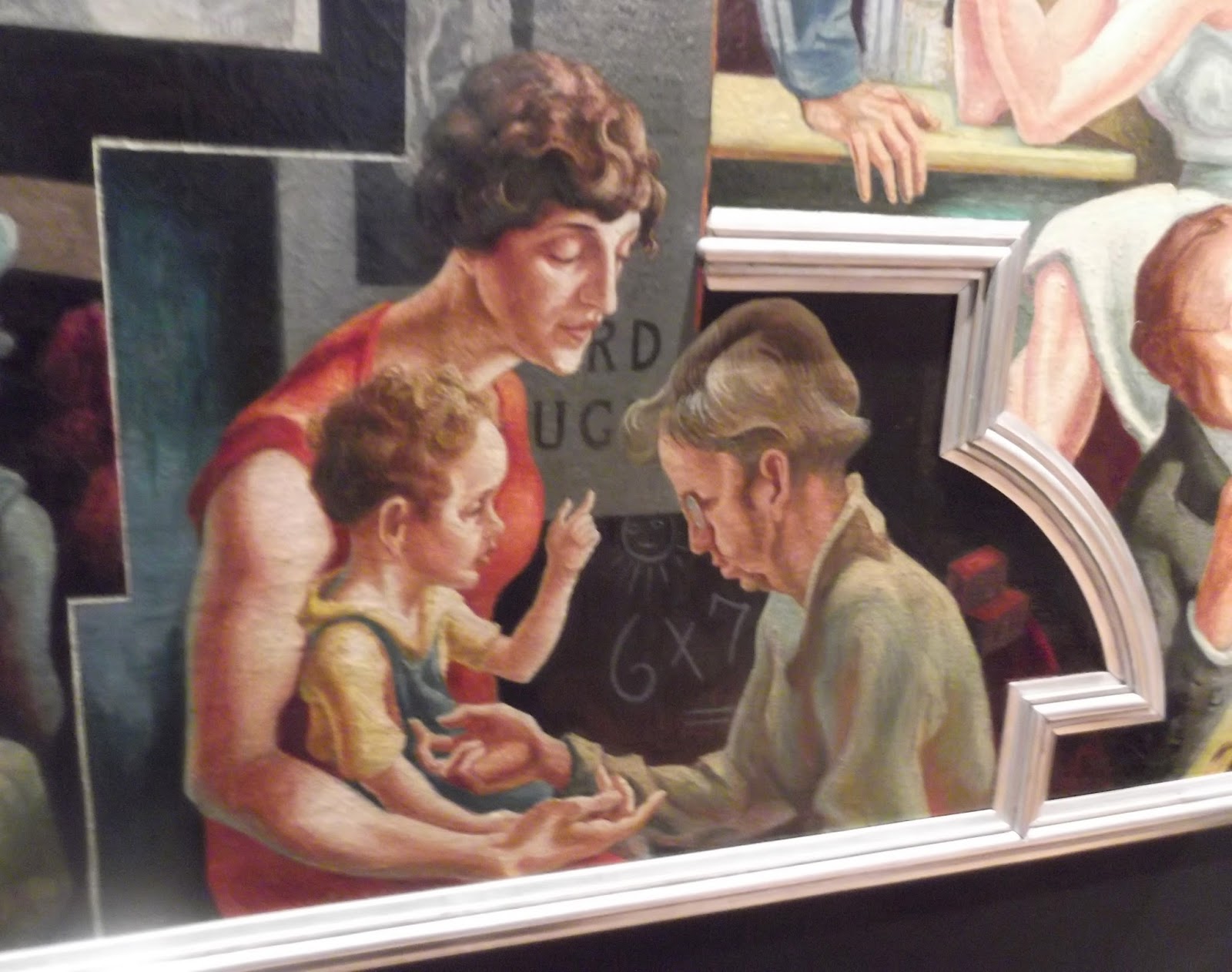 Invigorating, boldly dramatic, optimistic, full of colour & life, the mural celebrates the industry that created the American Dream - yet the Depression was just round the corner. 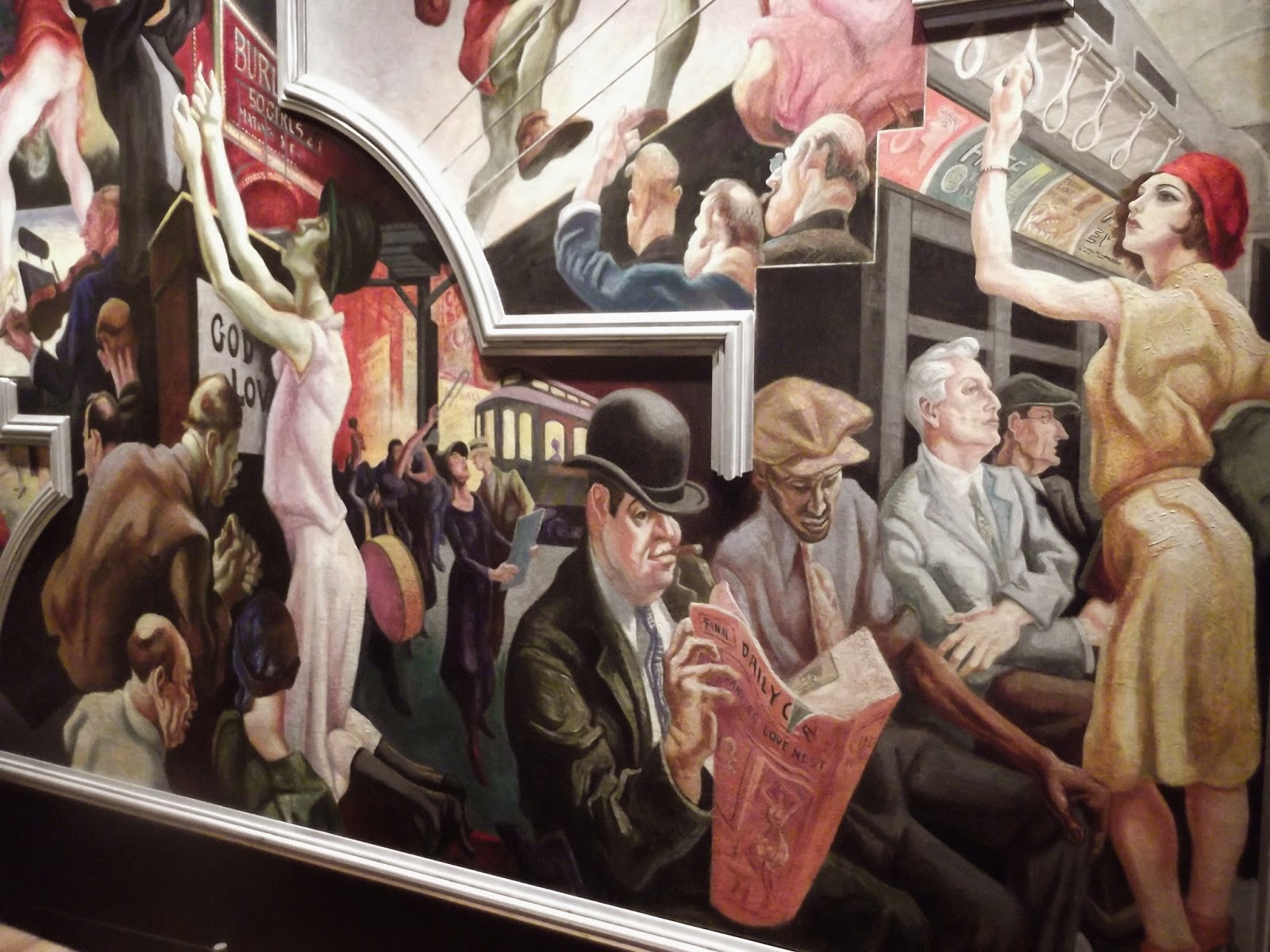 This month the new, completely redesigned Plaza outside the Met opened after 2 years: new fountains, trees, seats & tables under the trees. It feels like Paris! Billionaire David H Koch paid all $65m cost. 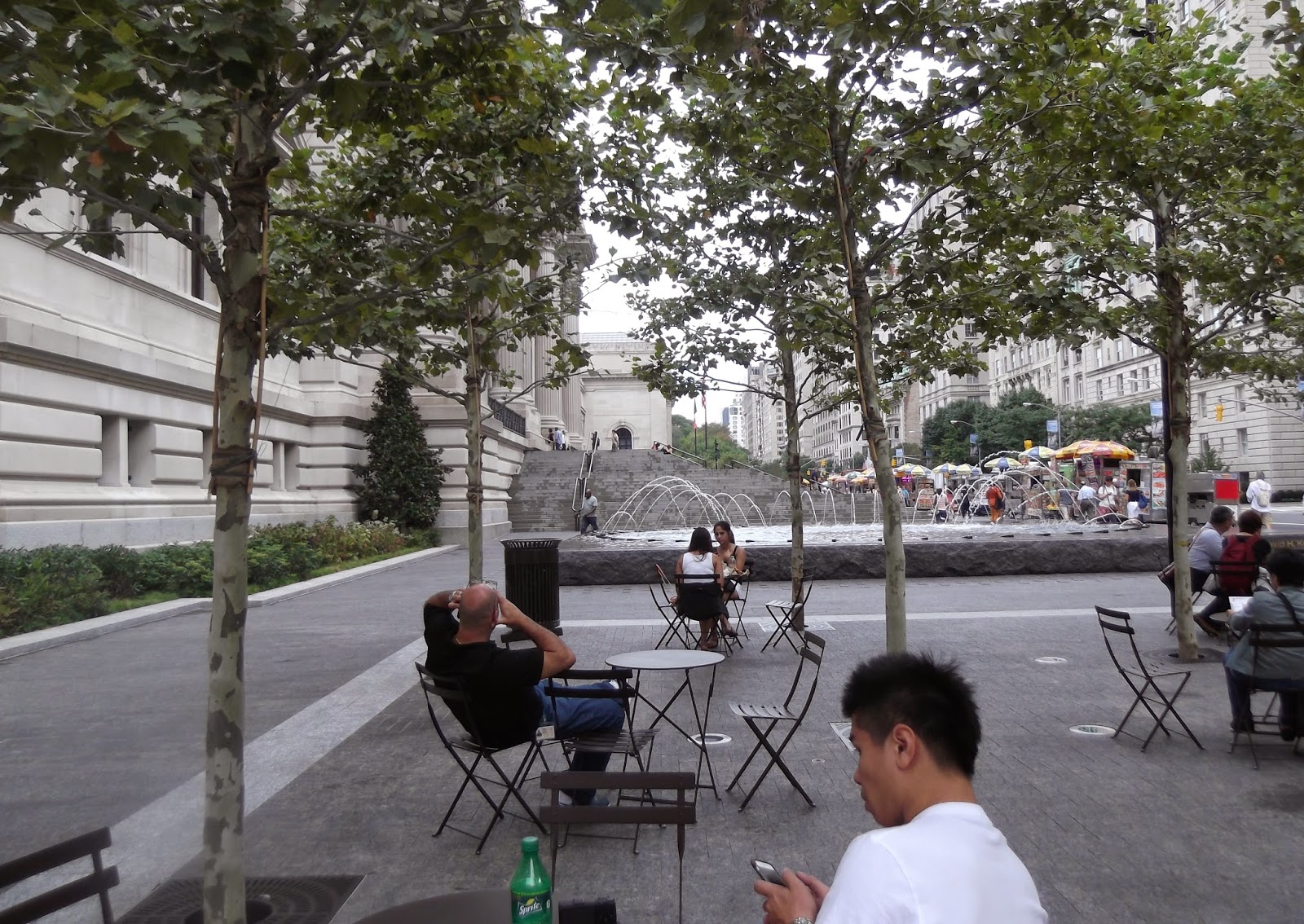