So is it as bad as they say? The reviews are damning. Yesterday we went to see for ourselves. Conclusion? It's a sloppy, scrappy, slight, messy, ugly affair reminiscent of student shows. Too narrow a view. It includes the old, the very old & the dead. The average age of one floor is said to be 55, another 50. The film section lacks film. Overall there is little media or video apparent on the main exhibition floors, surely a perverse decision for 2014. From this Biennial, you would think American art, even art world-wide, is poor, trite, vapid. 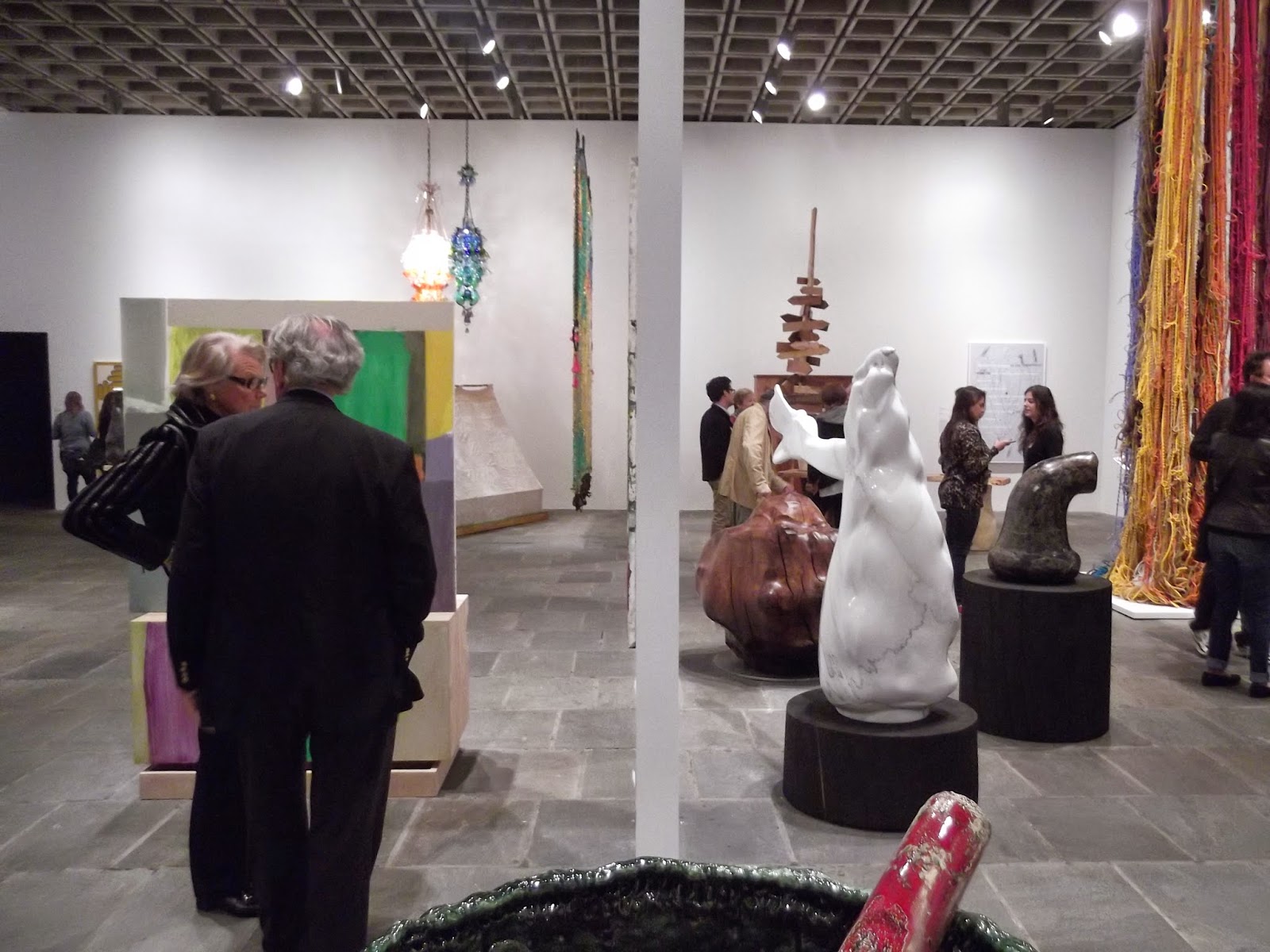 It's the last Biennial before the Whitney moves downtown to its new building in the meatpacking district beside the High Line, in Chelsea. What a sad sad end! The Whitney Biennial has a long history of excitement, important discoveries, surprise, buzz. Controversy, yes. Mediocrity, no. 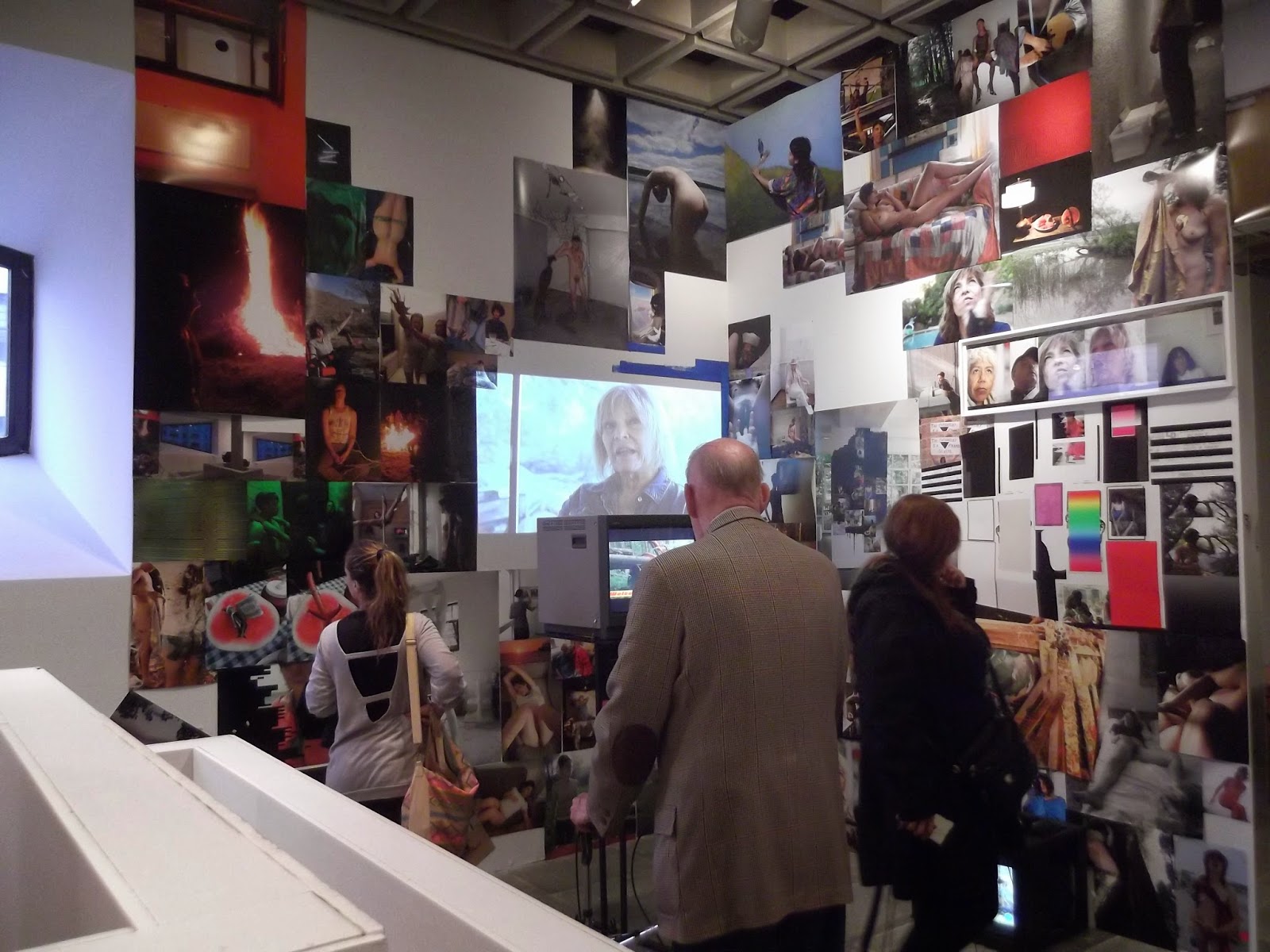 This time selection was in the hands of 3 curators from outside the Whitney Museum. Each has a floor. Michelle Grabner from the Art Institute School Chicago, crams her top floor space to overflowing. It's packed: stuffed with kitsch. She includes many women, (16 out of out of 38 - still majority men) & lots of crafts. There are ceramics (Kusaka b 1972 Japan), a silly waterfall of wool (Sheila Hicks), huge ugly pots by Ruby. 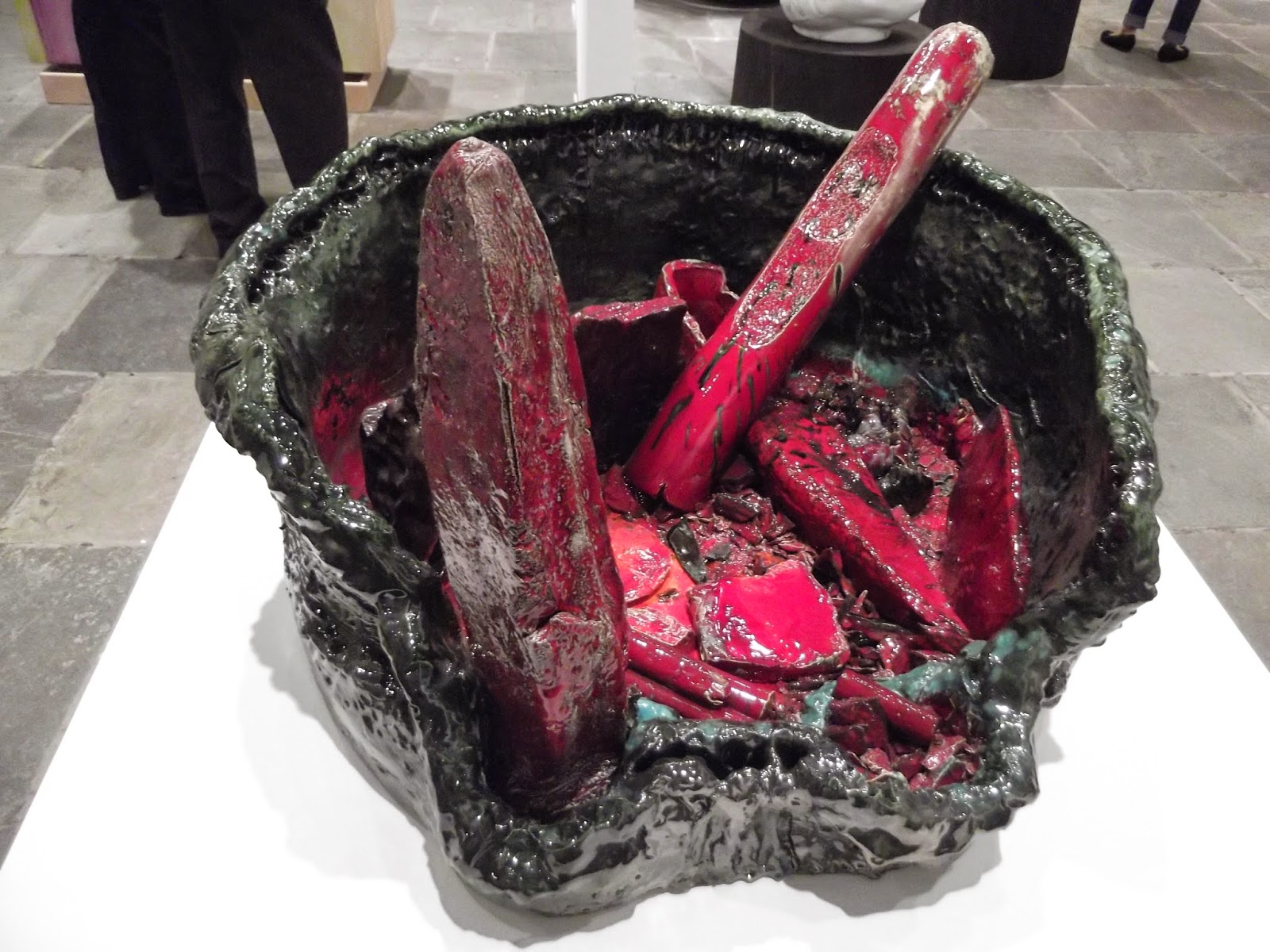 With so much stuff, it’s hard to focus. I liked Dawoud Bey's photo portraits, but then I have admired his work for years, ever since he was included in Scotland’s Fotofest in the 1990. (Whatever happened to that?) Also Charlesworth’s silhouettes & Mason's elegant Tile Wall & ceramics. Mason was born in 1927. 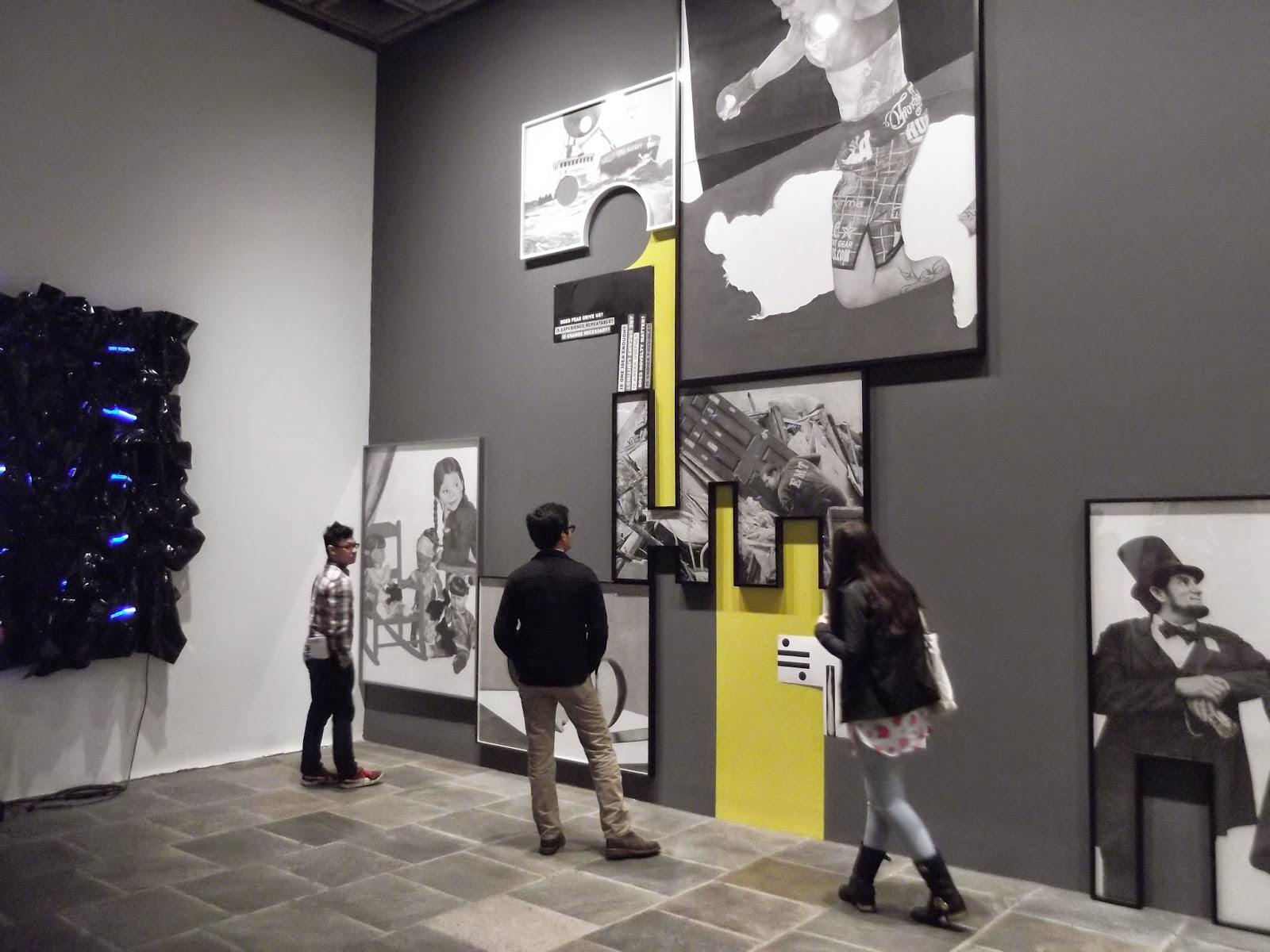 To be fair, Grabner loses a large chunk of her floor to an artist selected by Elms.  Zoe Leonard has fitted a camera obscura lens in the famous Breuer window, but tragically the result is forlorn grey, vapid shadows of no import whatsoever. A nice idea which should have been rejected.

So this Biennial is NOT about emerging artists, not a snapshot of an American zeitgeist. Nor is it about painting of any kind. 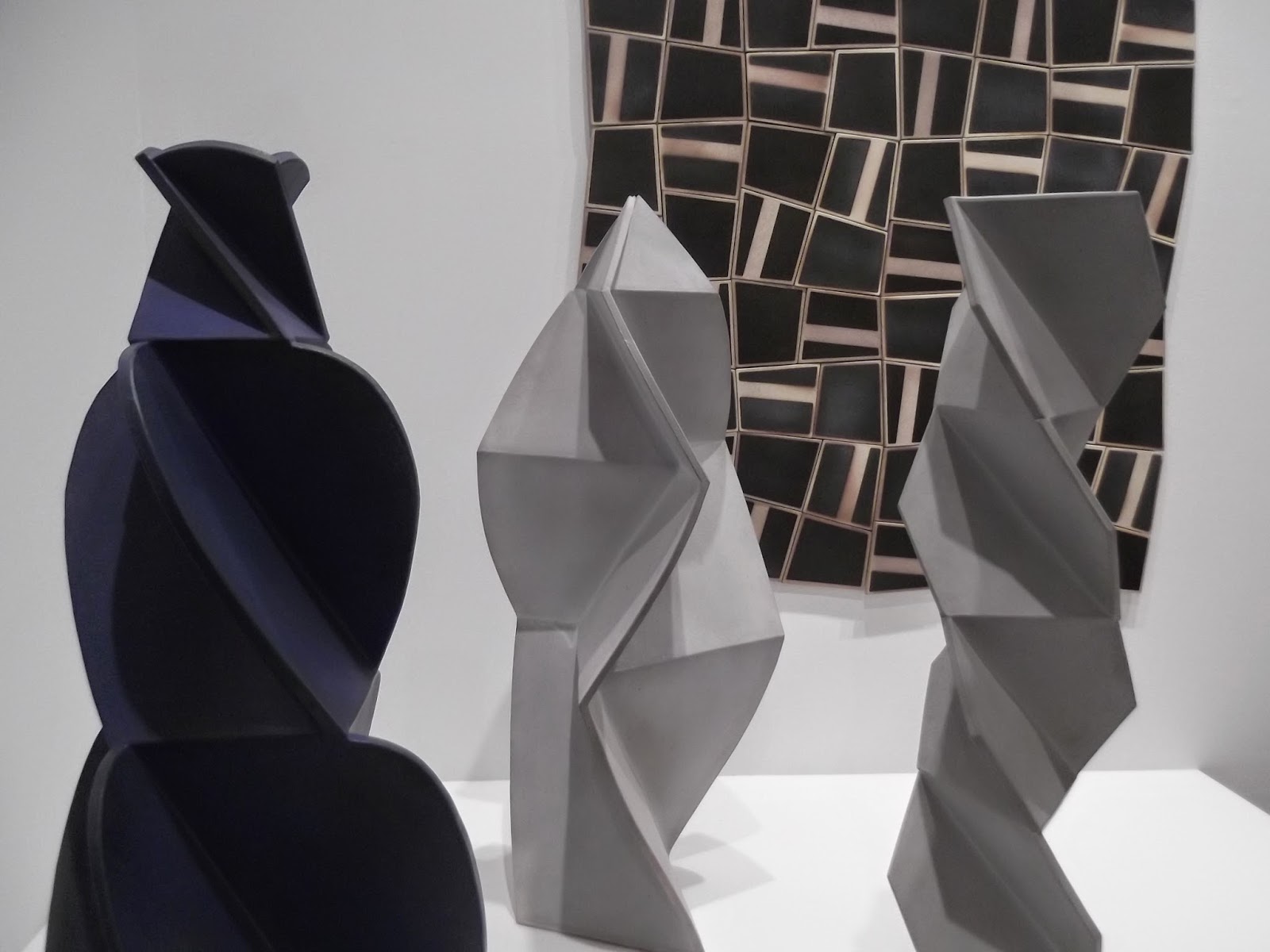 Mason
Charlesworth's dates are 1947-2013, and strangely many in this Biennial are dead & too many died savage deaths: from suicide, AIDS, even immolation. Surely the Whitney Biennial is not the place for memorials on this scale. It’s the first time I have ever noted down artists’ dates as I looked at what are over-long labels full of artspeak. 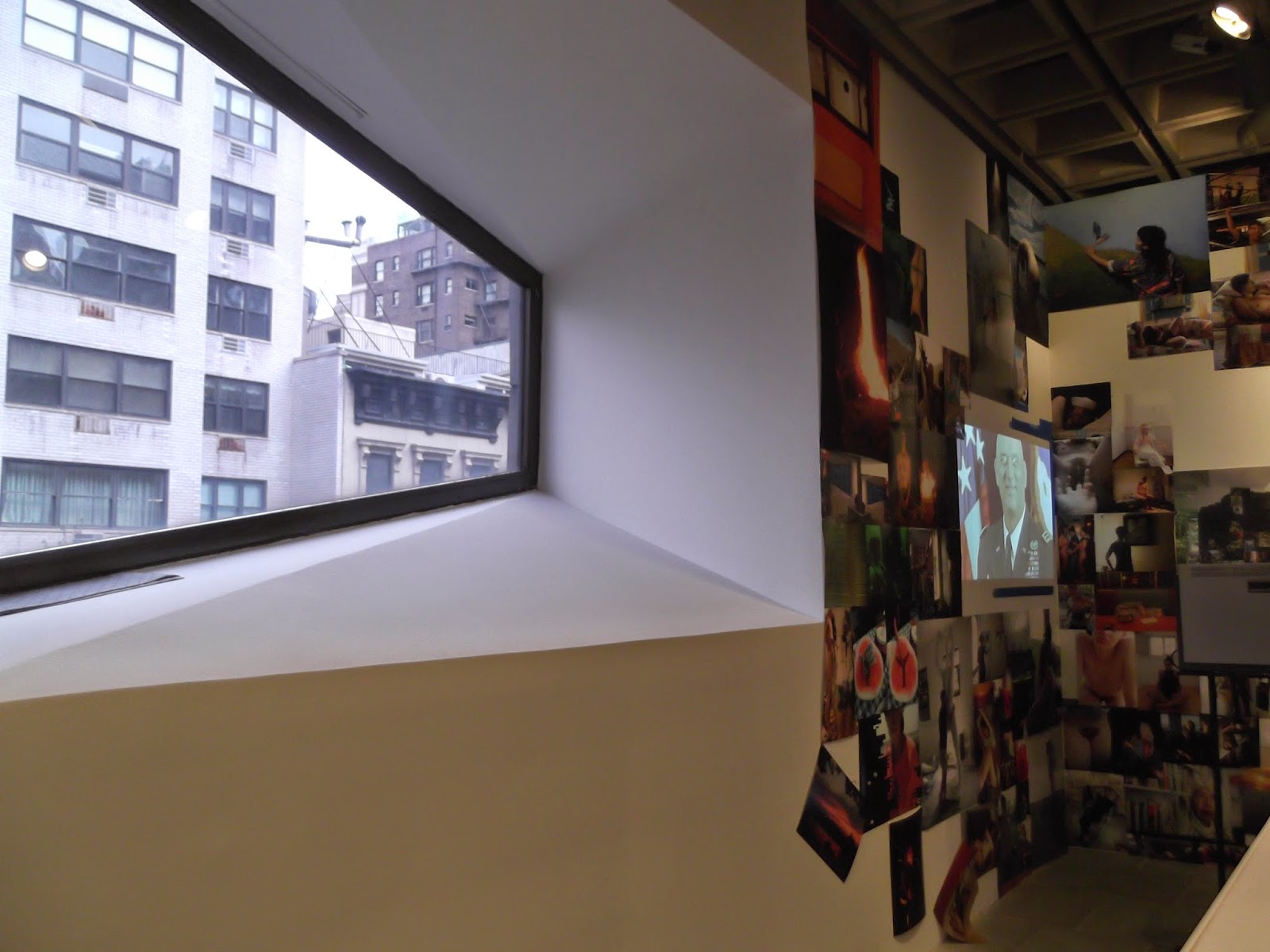 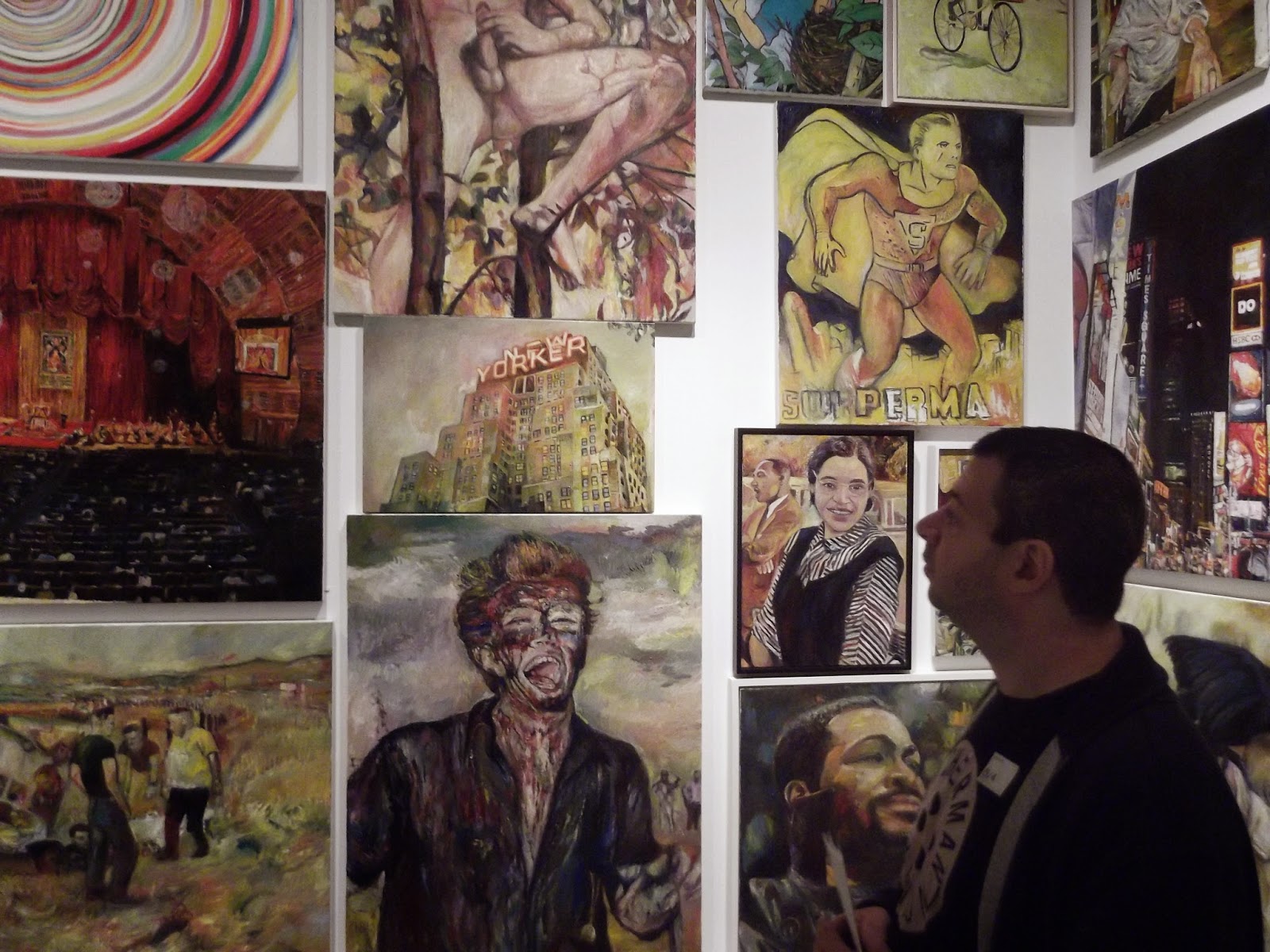 Last Anthony Elms of ICA Philadelphia who talks about, “an American aesthetic of uncertainty." He also says, “Assembling an overview of American art these days is a fool's errand."  His 20 artists include Paul P's small subtle watercolour portraits, some high-up wall mounted aluminium cymbals by Adkins (1953-2014), wall of b & w collages by Von Heyl, a LED curtain and a too long empty wall of too many letterpress poems. 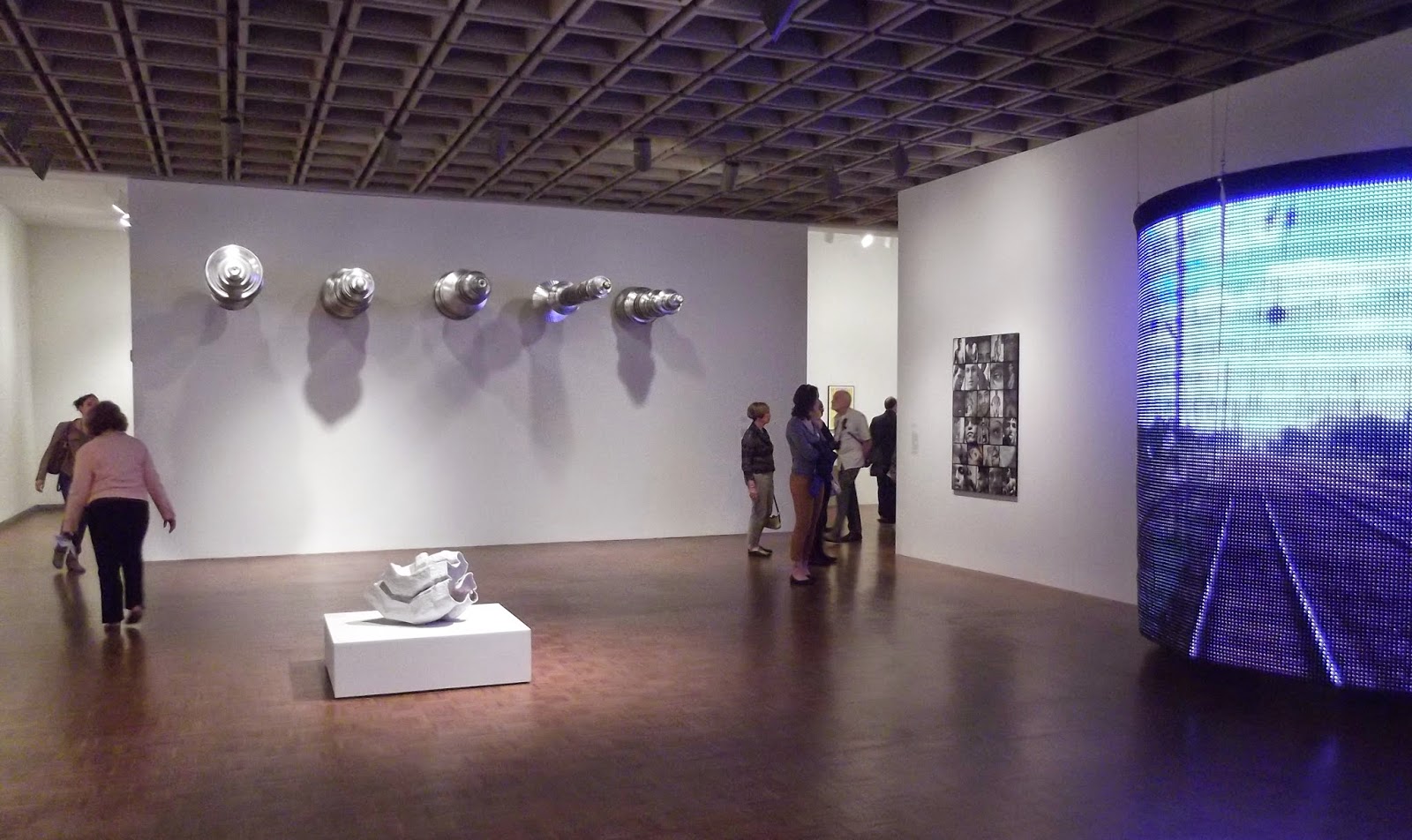 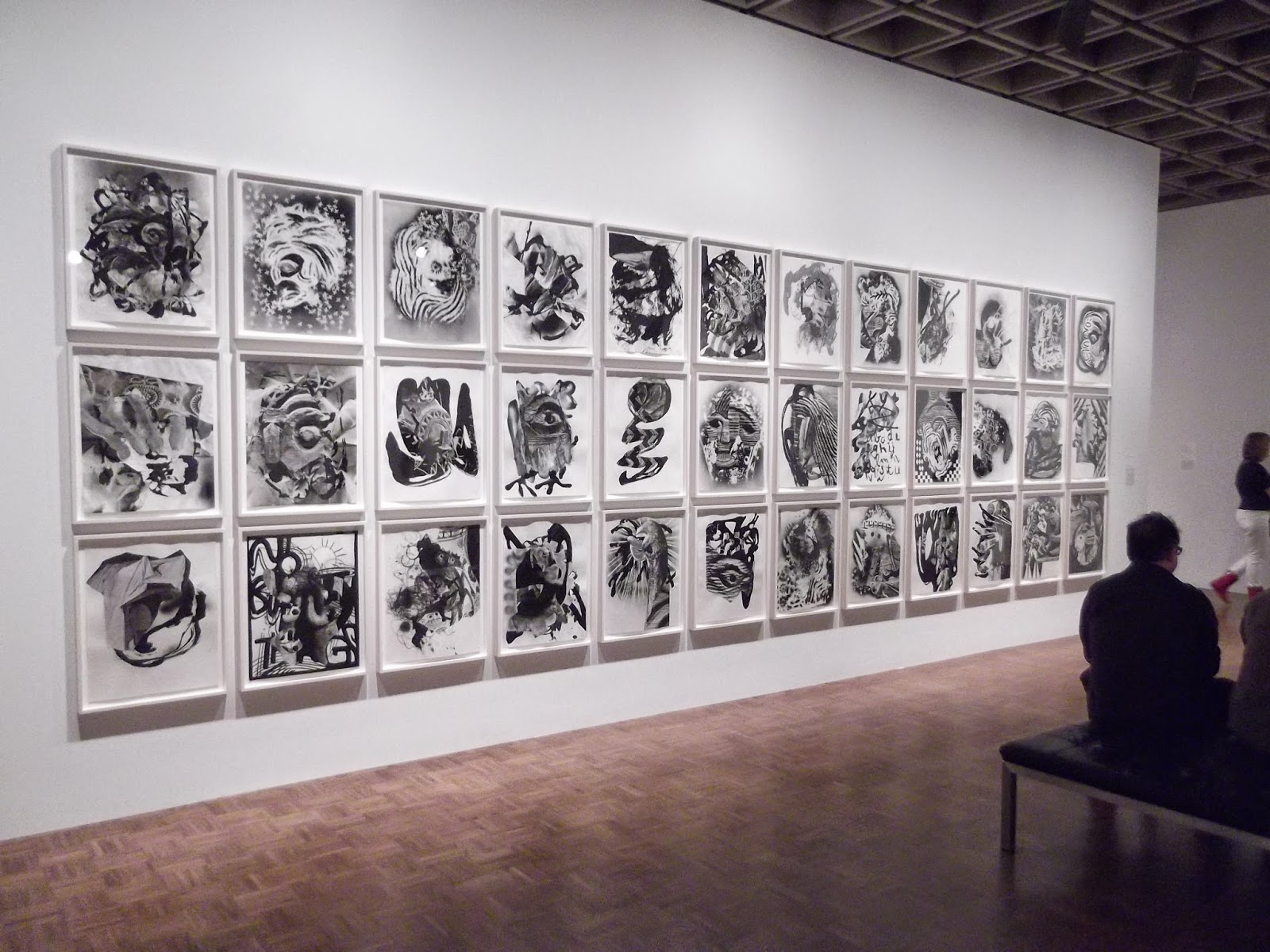 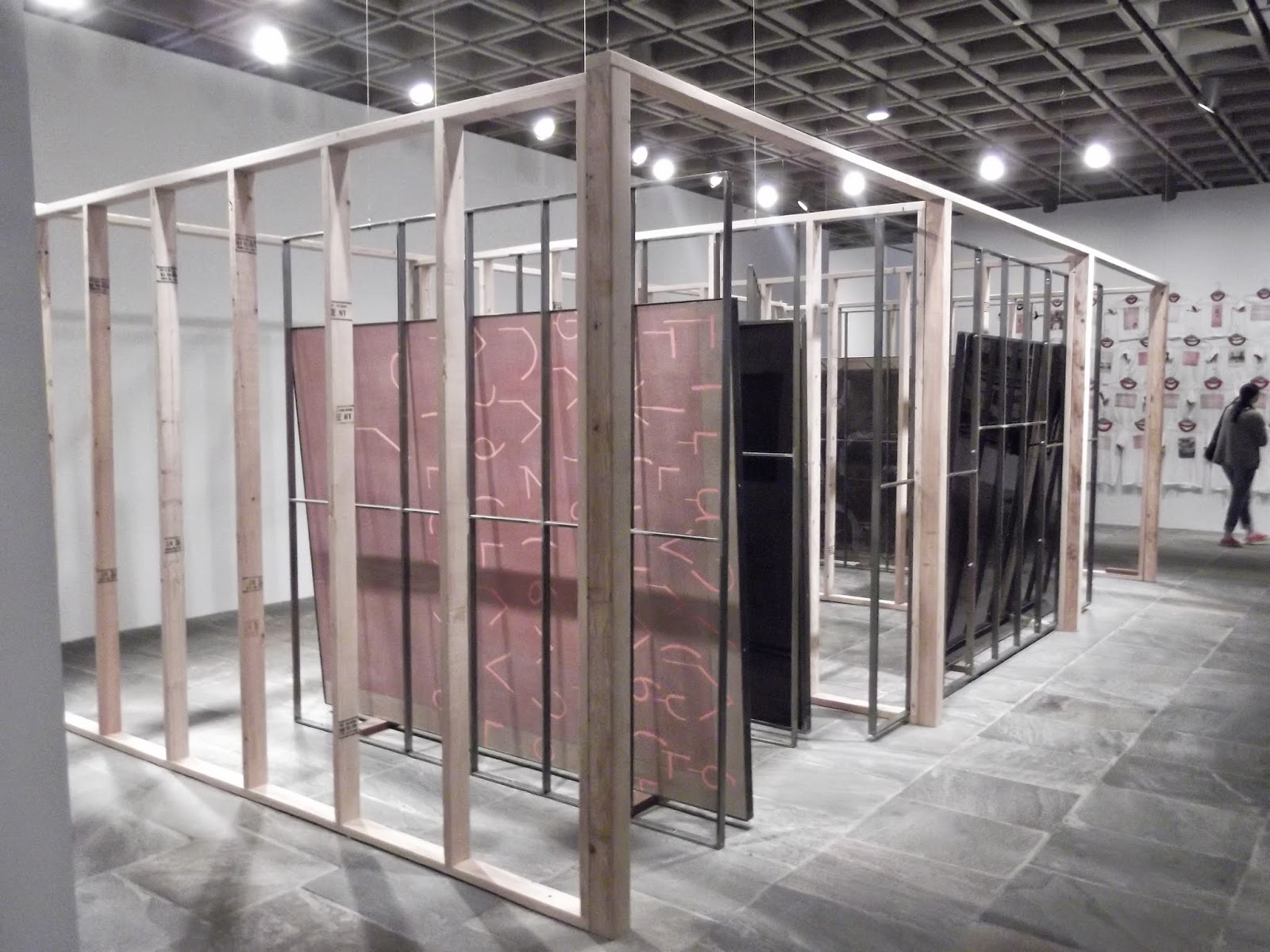 Then there are the amateur-looking pieces so terrible I don't want to know the artists' names. Hideous straw hats, aimless constructions, lumpy sculptures,... The whole thing makes me angry - & in this I know I am not alone. The Whitney Biennial has a long history of excitement, important discoveries, ... Controversy, yes. Mediocrity, no. 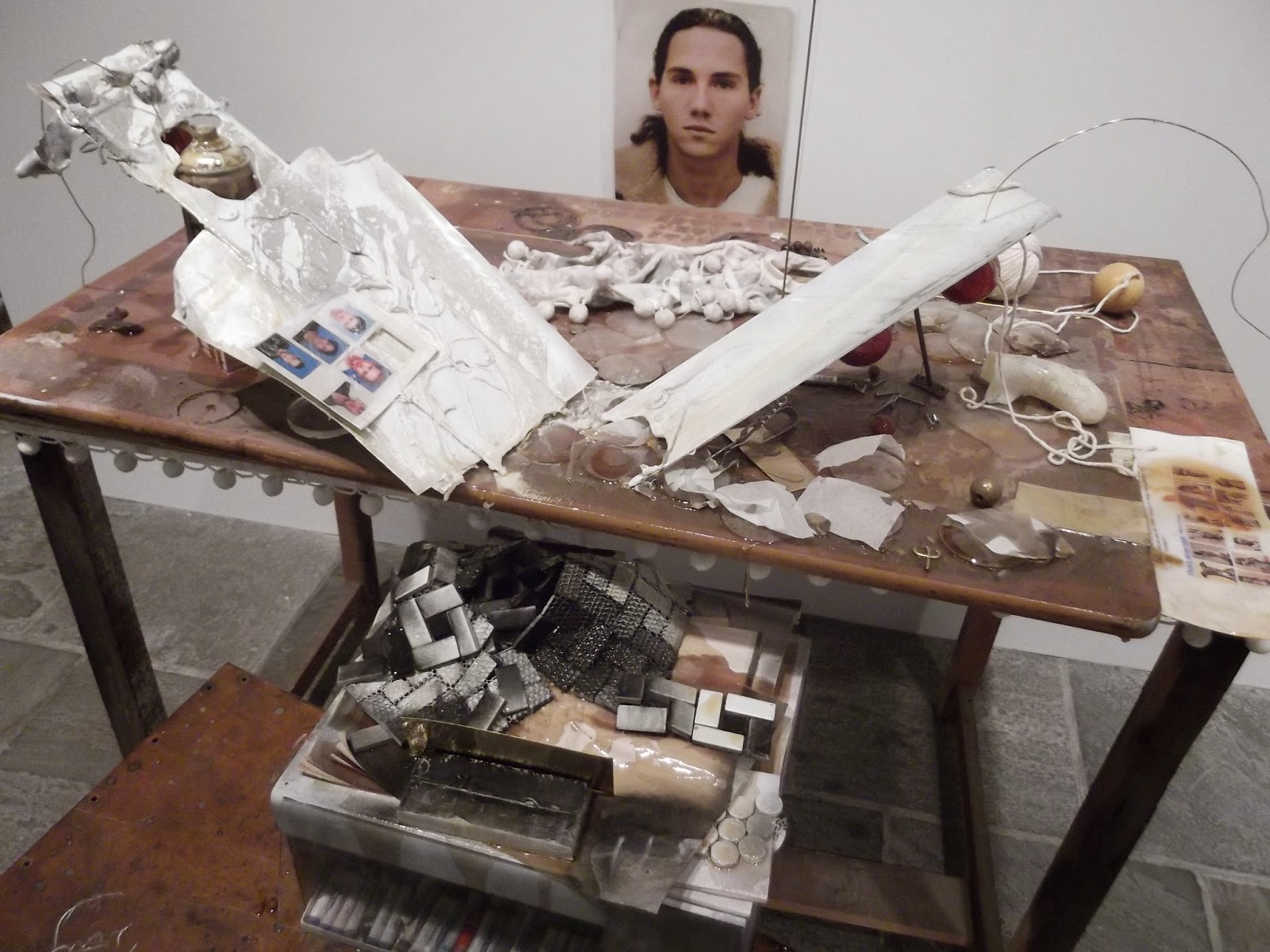 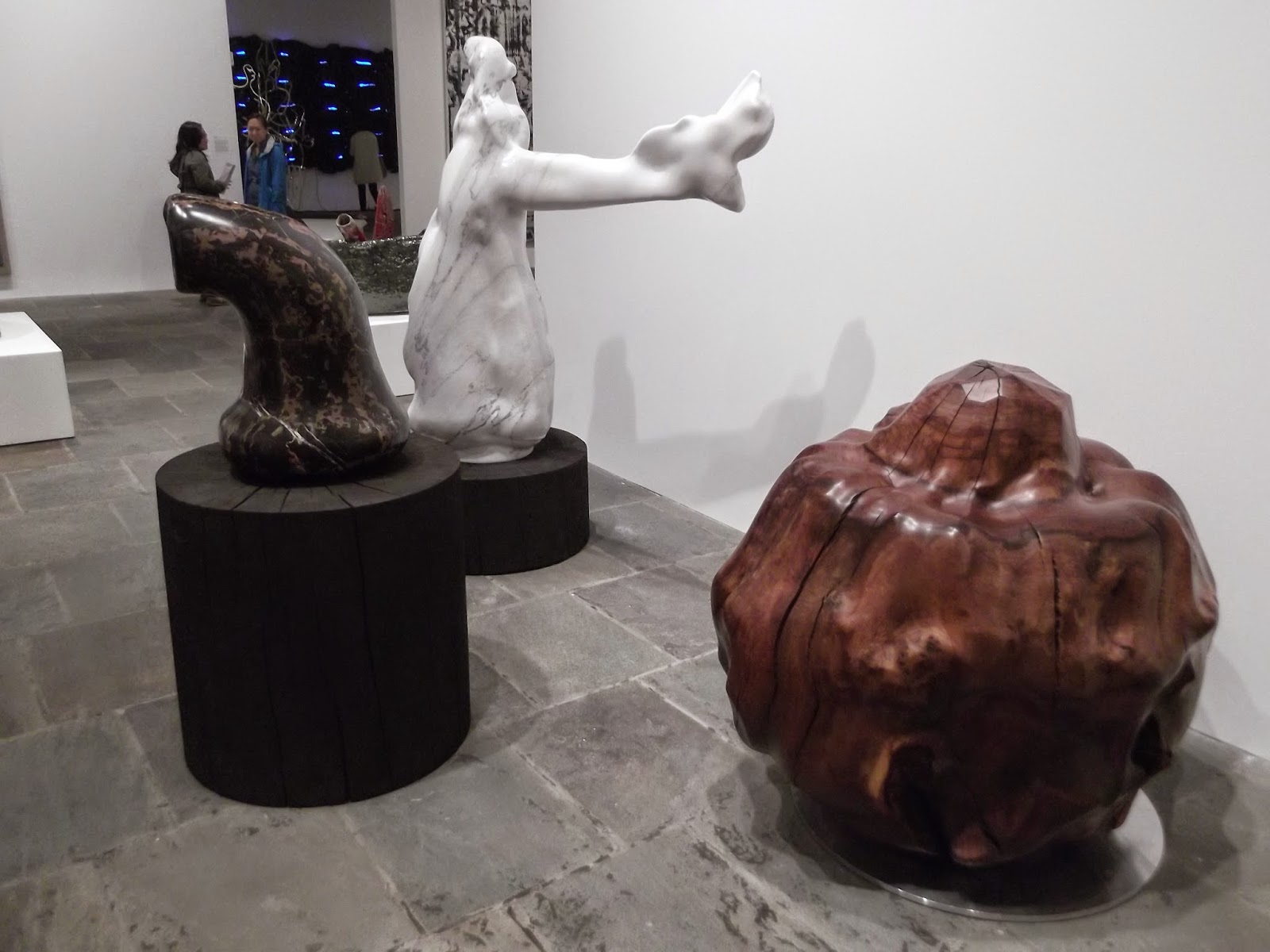 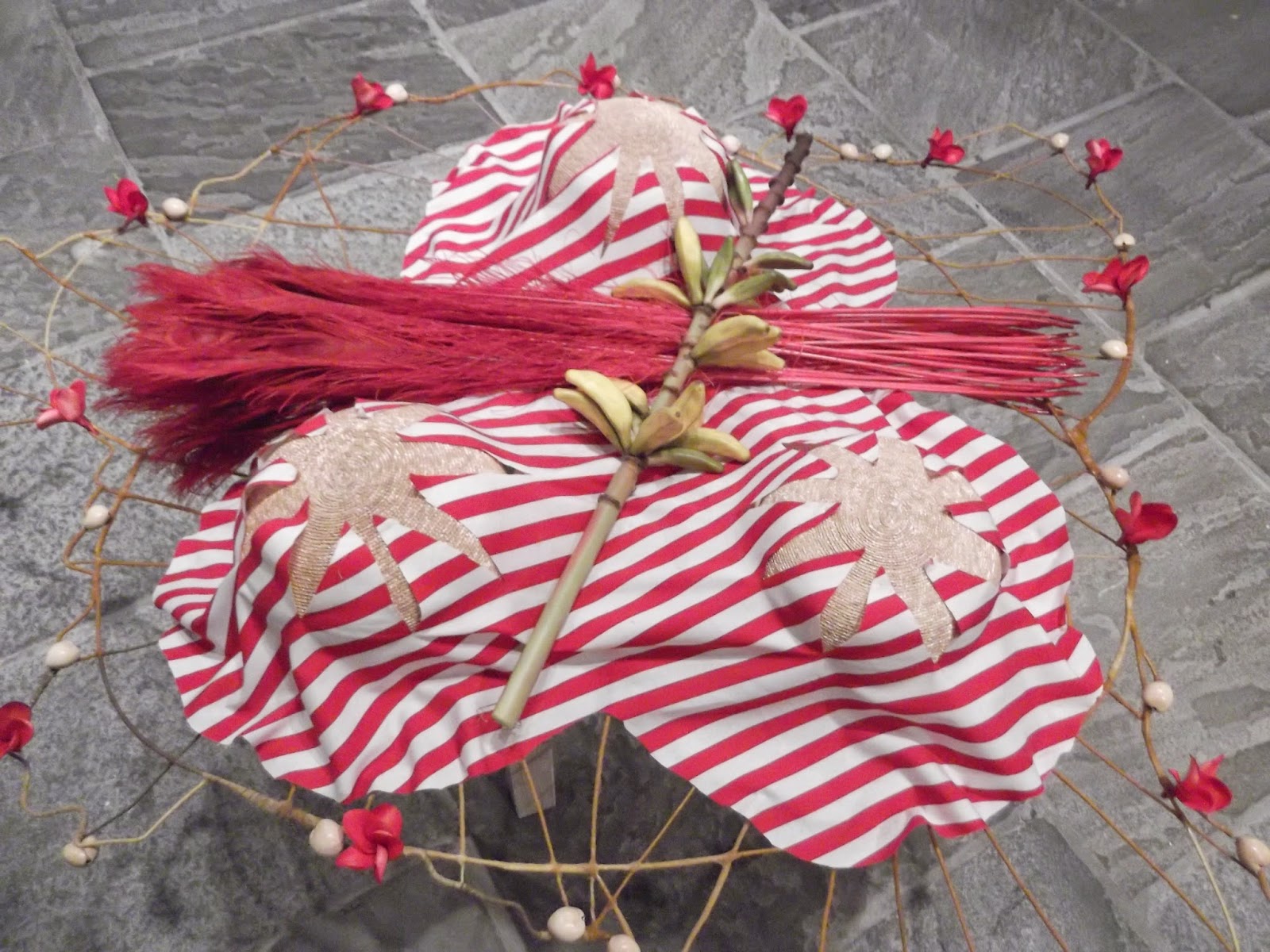 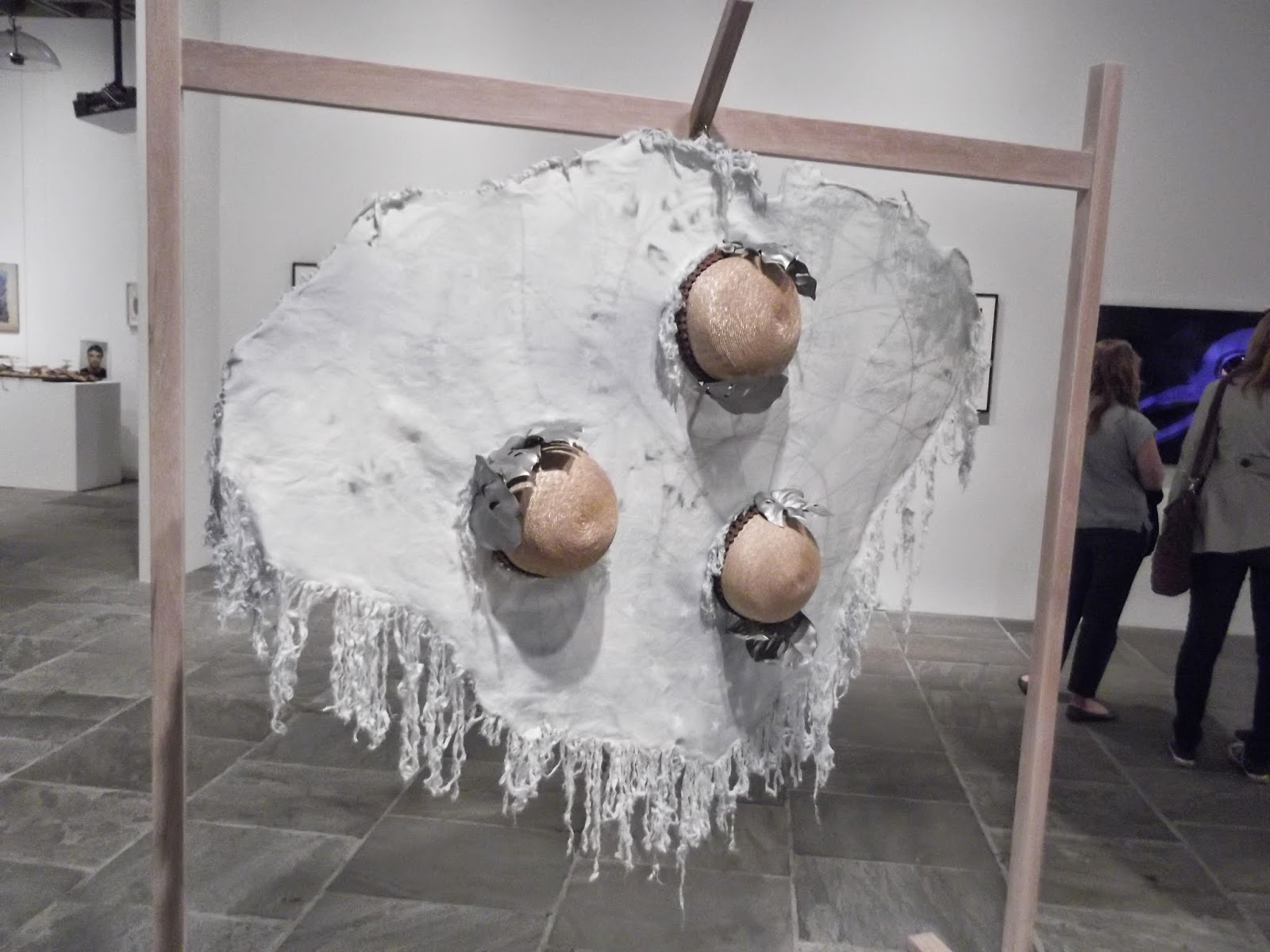 "WE hope that the 2014 Biennial will suggest the profoundly diverse & hybrid cultural identity of America today," says the Whitney. With a total 103 participants, (their word) I had hoped for at least one memorable exhibit of some sort. In the end the fact that "archives" played a role was the most interest outcome.

To contact me: clrhenry@aol.com or leave a message.
Labels: Whitney.