"When the Glasgow Group first met in 1957 Scottish art was in a bad way."  So says Alasdair Gray of New Lanark fame. He was there so he should know, & he is present again in the Glasgow Group's latest exhibition at The Lillie Gallery, Milngavie, 55 years later. Ten members plus 3 founders make for a diverse array. . 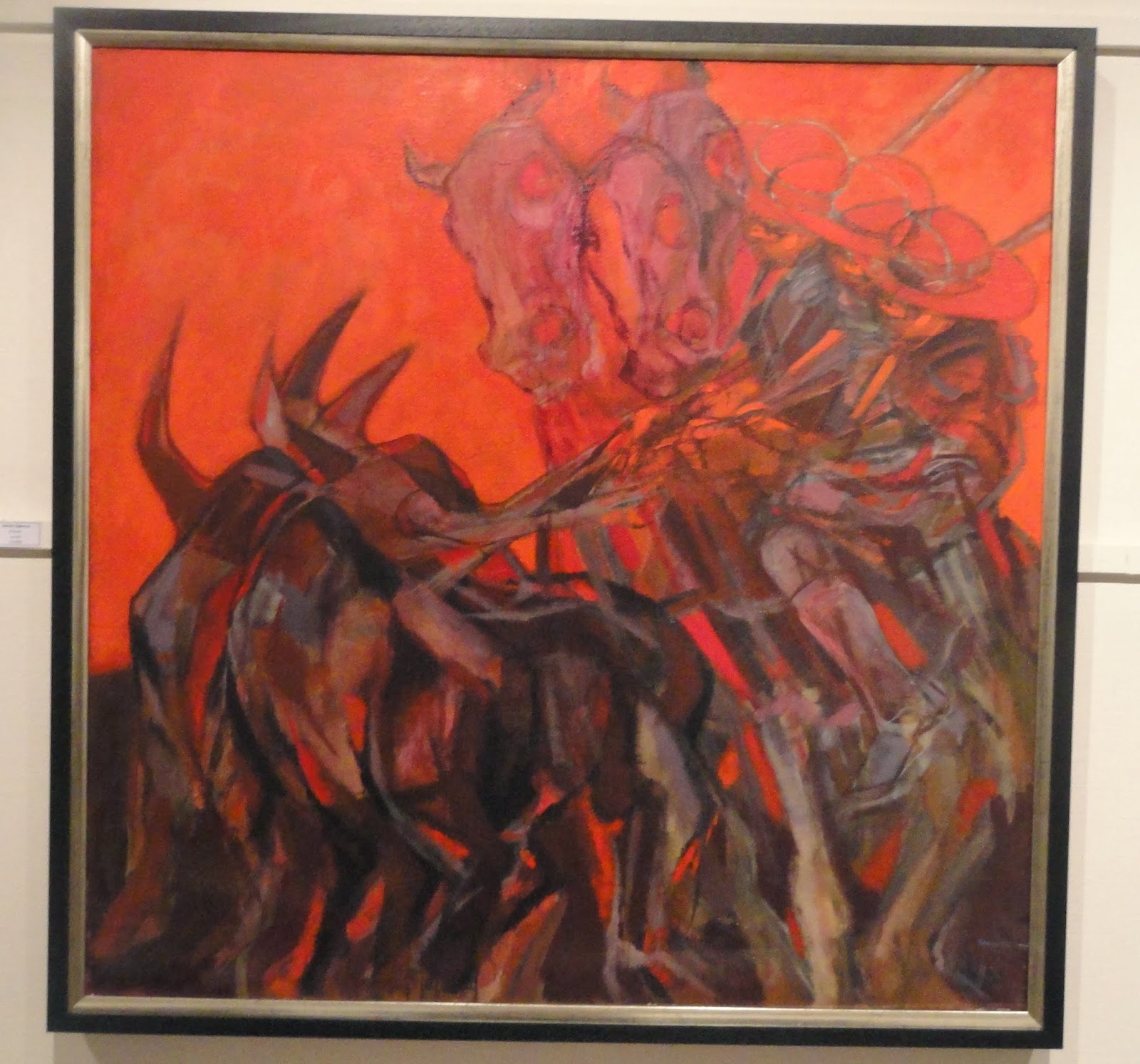 The Glasgow Group, which in 1958 had an average age of 22, went on to become a cutting edge affair with founders James Spence & Anda Paterson (also exhibiting large scale pictures at the Lillie) instrumental in keeping things both alive & lively, & international, alongside John Bellany, George Wyllie, Sandy Moffat, Richard Demarco et al. All a true cooperative with members volunteering time & effort.


Shona Dougall, the current chair, shows a colourful Cliff Face; Claire Paterson's oil nudes are especially ambitious; Gregor Smith's atmospheric watercolours of Mull & Lewis, just lovely. Anda's diptych Pilgrims, is a wonderful example of her powerful drawings of time-worn people, their swollen feet, wrinkles & arthritic hands a testament to hard work and endurance.
Sunday. I have just found, in among my archive papers for GSA, a piece dated August 1990 for the Herald: "I was very touched and honoured to be asked to launch the Glasgow Group's inauguration of the city's brand new Tramway www.tramway.org, exhibition space in June 1989. Since then Tramway has seen many exciting shows, both international and Scottish, but with the exception of the Compass 21st B-day, none as important in terms of local involvement. In European City of Culture Year it's worth remembering that, without the longterm spadework put in by local organisations such as the GG, Glasgow 1990 would never have happened. It was entirely in character that the GG should take on the awesome challenge of inaugurating such a large. difficult space as Tramway on an almost non-existent budget. Lack of basics: no proper lighting; no moveable screens, no wall cladding, much less rails to hang pictures. So far more than 400 guest artists, from David Donaldson & Sir Robin Phlipson to Peter Howson, Tracy Mackenna www.mackenna-and-janssen.net & Louise Scullion www.dalzielscullion.com (plus Glasgow Sculpture Studios, Norway & Wales) have participated."
www.glasgowgroup.org Till February 20th. Tues-Sat 10-5pm.  Prices £75 to £7000. The Lillie, a purpose built gallery, dates from 1962. 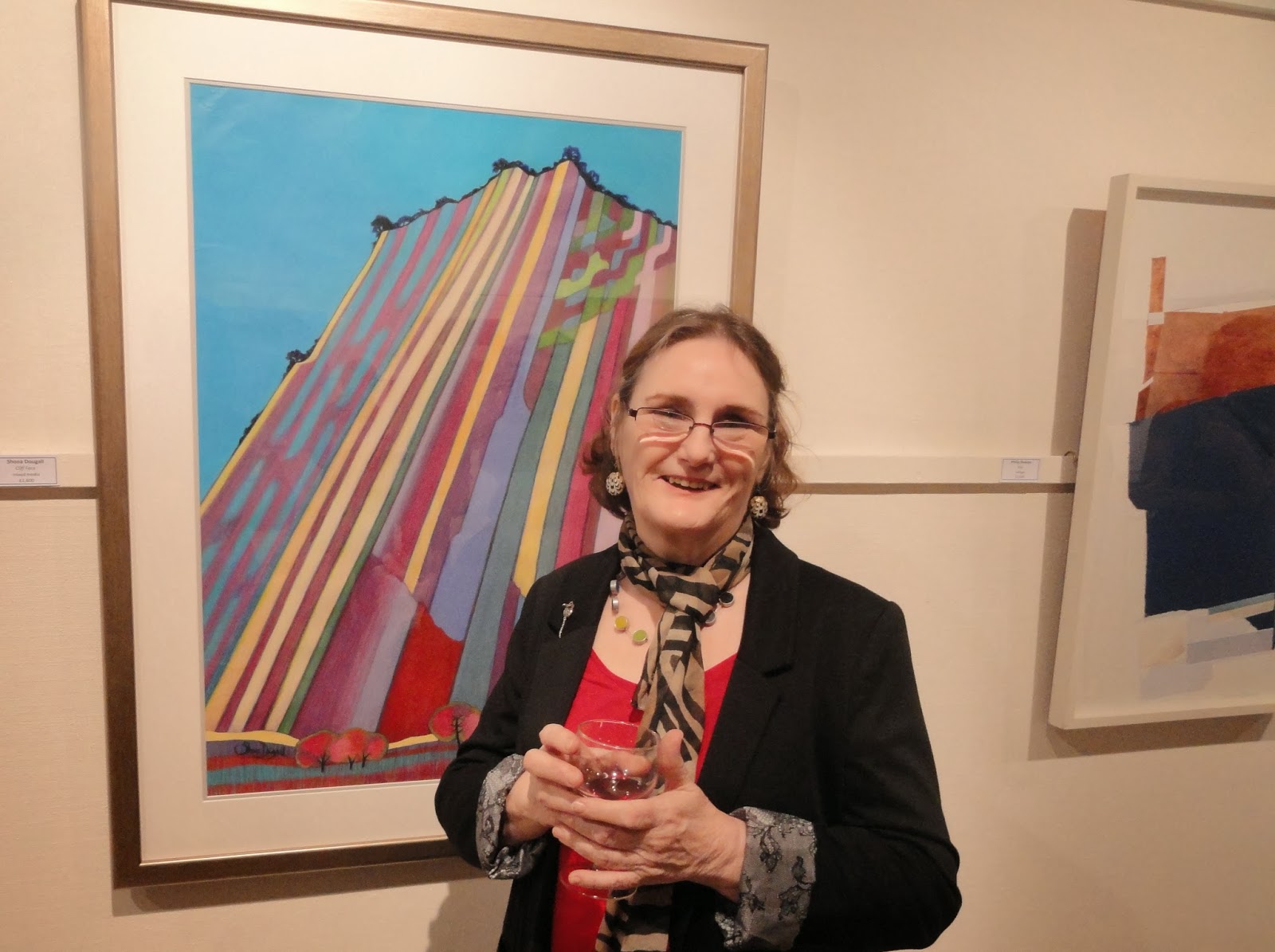 When Glasgow Print Studio was founded in 1972 Scottish printmakers had nowhere to print (except Edinburgh), so again young artists, (average age 28) got busy & made it happen in a basement & ground floor of an old electrician's shop at 43 St Vincent Crescent. Over the last 42 years GPS has received big Lottery & Arts Council etc funding, & now has a world class gallery & workshop on 3 floors of Glasgow's art hub at 103 Trongate. 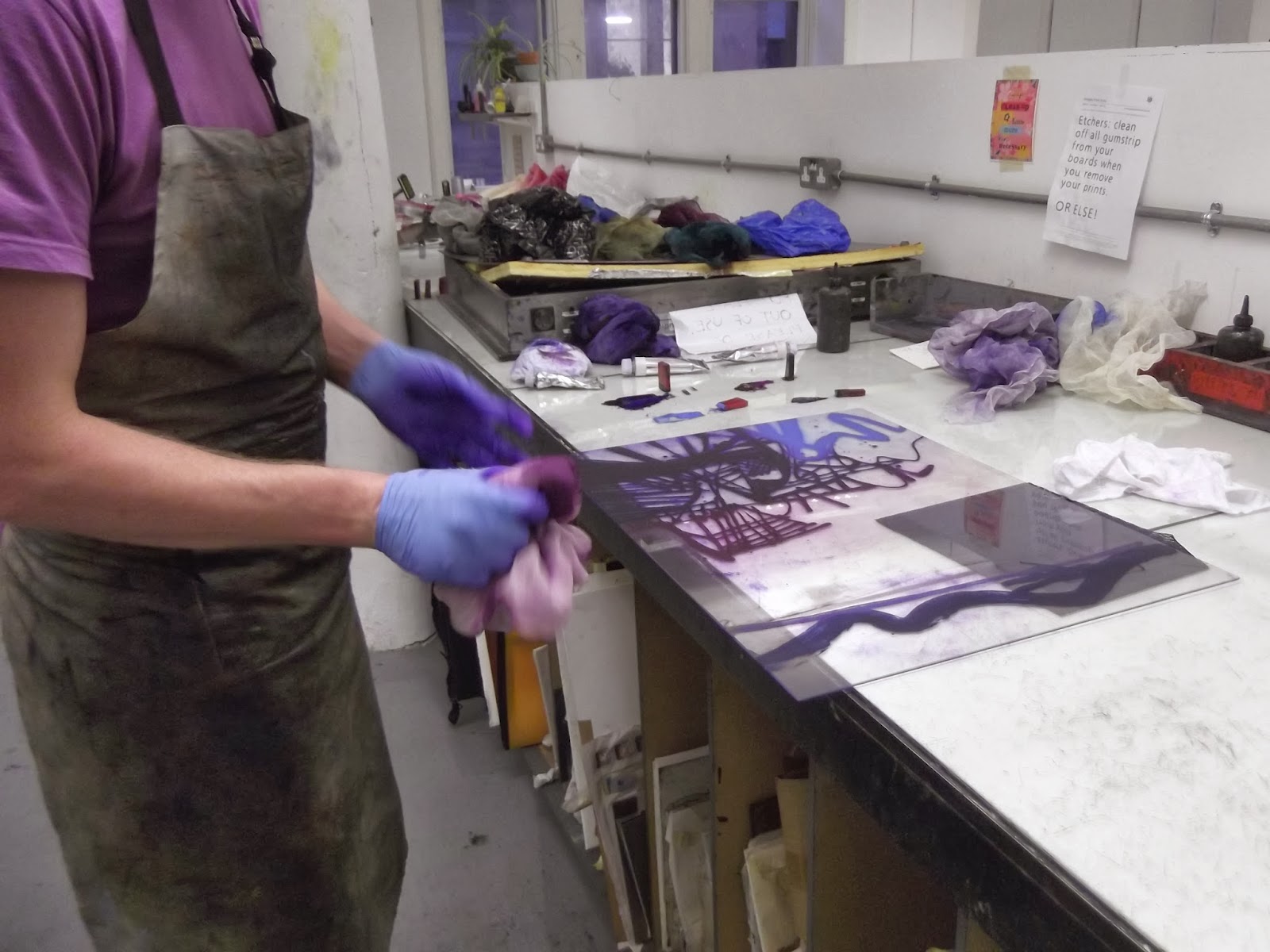 The current good & also diverse GPS exhibition, Living Proof, alludes to Darwin's Theory of Evolution, but also the printmaking term artist's proof. Really it's a way of gathering images of creatures, a current fascination of many GPS artists like Elizabeth Blackadder or Helen Fay.

Watson's Goats in Tree                                       Cook's Survival of the Fittest.
Ashley Cook & Fiona Watson both did tackle the subject of evolution to great effect, but most prints - like John Byrne's Boy+ Lion or Ray Richardson's dogs are familiar images. I especially liked Marion MacPhee's Whales and Murray Robertson's detailed sea creatures. Ironically Gray is in BOTH shows, at the Lillie with an outrageous nude, On a Very Striped Coverlet" and at GPS  with  his Scots Hippo! Terrific!


As Watson says, "The medium of print has historically been important in the dissemination of natural history information (and misinformation)!"  Till Feb 2nd. http://www.gpsart.co.uk