The Empire State was presenting an online LED  light show+ spooky music for Halloween and Rihanna and Damien Hirst played tattoos & Medusa snakes. (Marina Abramovic did it better 20 years ago).
So what did Banksy do? First he turned a thrift shop landscape into a disquieting scene plus Nazi officer contemplating the view. It's titled "The Banality of the Banality of Evil." Price at auction ? ? Not so banal, I fear. $600,000 they say. Then a cheeta reclining near Yankee Stadium. My favourite is the robot for Coney Island 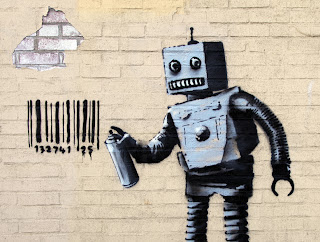 Best of all he wrote a very articulate Op Ed for the New York Times - which they refused to publish. Read it here or at  Banksy.co.uk 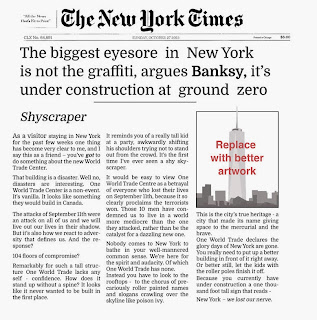 But now his NYC October residency - every day a trick or treat to upset the graffitti police - is ended. He's gone! Saying -
"And that's it. Thanks for your patience. It's been fun. Save 5pointz. Bye."