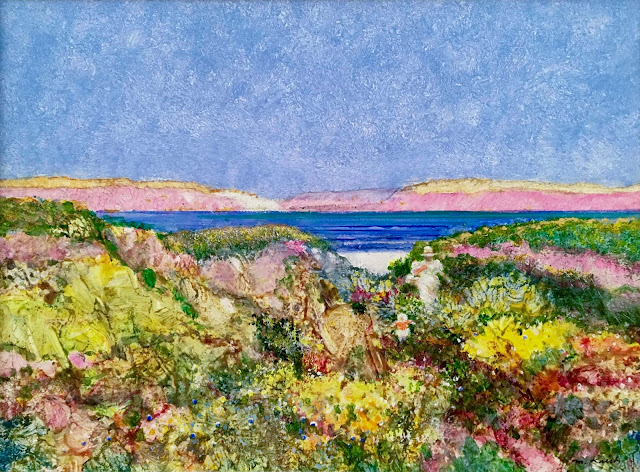 Beach Walk by Morton Kaish.
Distinguished. Professional. Admirable. Esteemed. If this makes MORTON KAISH sound like an old master, think again. His relish for blazing rapturous color, vigorous brushwork & intricate handling, produces paintings that radiate joyful exuberance; their glow and energy that of a young painter.
Kaish loves color. "I try to surround myself with buoyant, optimistic color. "We artists sit here with a palette filled with color. For heaven's sake let's use it!" 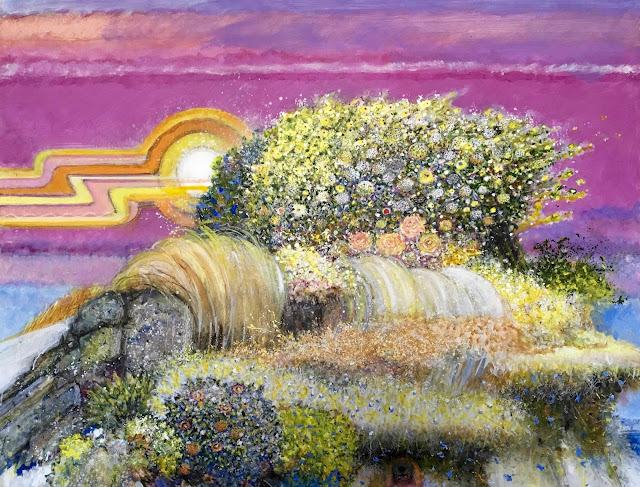 Sea Garden
The results are romantic but never sentimental. He is by his own admission "a glass is half-full guy." This is especially evident in his landscape and flower pictures, 30 pictures from 30 years 1986-2016. 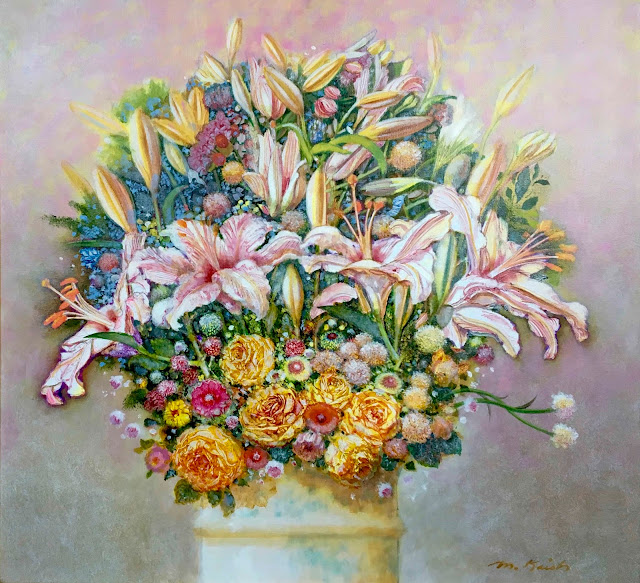 The flowers are not your usual formal 'arrangements' but a compression of color and texture which began in Ireland. "We went there in 1979, staying in remote Donegal to paint the emerald landscape but it rained day after day! So I ran out, picked wild flowers, put them on an old chair." 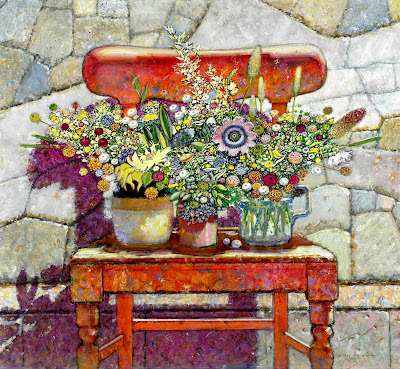 That Irish chair has stayed with Kaish as one of his key motifs. The flowers change - he adds a passion flower here, a hollyhock there - but the chair stays. "Being an artist leaves you in charge of the world," he told me. "You can re-order it however you want!" 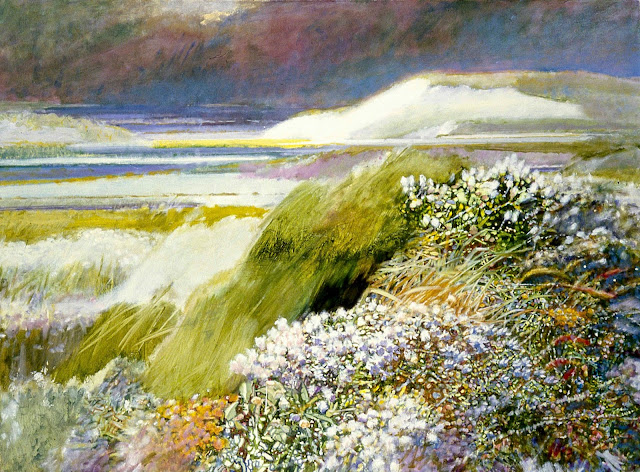 Chilmark.
His other love affair is the coming together of sea and sky over a coastal landscape. "For me it's magical." It began on his honeymoon in Provincetown in 1948, and continues to inspire many dramatic paintings.

Chilmark 2001 captures loose sweeps of tumbling coastal grasses beside quivering clumps of delicious wild flowers. "I wanted it to move," he explains. And it does. A big 6 ft 'Sea Garden" shows an intense stormy sky, set beyond pale cliffs while a flood of unique blooms cluster round a triumphant red hollyhock ?  spire. This, he says "takes a Chilmark moment to extreme. Our friends had this dream house on Martha's Vineyard with the Atlantic Ocean as backdrop." Wild Irises and West Wind 2012 are instances where one can actually feel a fresh breeze off the water. 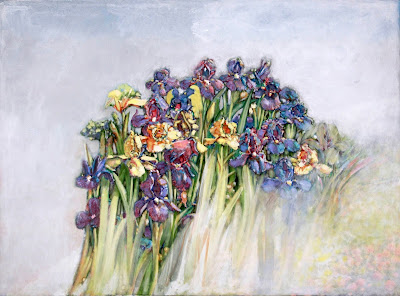 The Seattle Arboretum inspired another series of massed fields of flowers while a Manhattan allotment awash with hollyhocks is immortalized in Hollyhock Cantata. Kaish sometimes uses a combination of acrylic & oils, as in The Visitor, 2006, a rare vase arrangement which includes star-like spiky blue flowers amid pink & yellow roses as a single bee hovers. Another close-up, Lilies and Roses 2006, celebrates his daughter's favorite flowers. 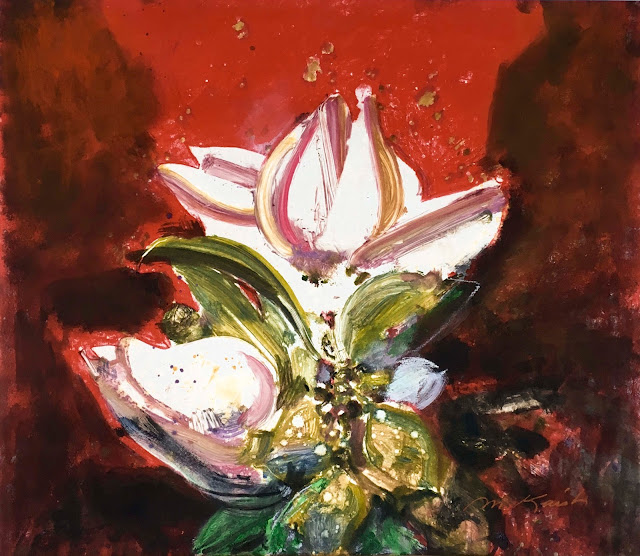 Kaish can do big and bold too. In 1998 he began to focus on a cherry tree, but rather than elegant or fragile, he set about giving it majesty. A single Cherry Bud, with scrumbling light over dark to create transparency, makes an impressive 5ft statement. New Day enlarges a tree stem while the major eye-catching Delicate Balance 1989 is nothing short of fierce. 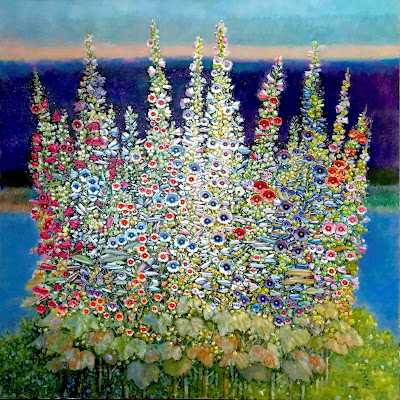 Morton is an accomplished printmaker and he employs etching and collagraph to create  assertive angry plants, like Iris Bound or Steel Thistle Rising 2002. Monotypes return him to upbeat Hudson Summer or a single happy Spring anemone.

Landscape and flowers are just once aspect of Kaish's armory. This year's beautiful photogravures of giant magnolia blooms found in California, demonstrate that he continues to live an enviable creative life of travel and adventure. 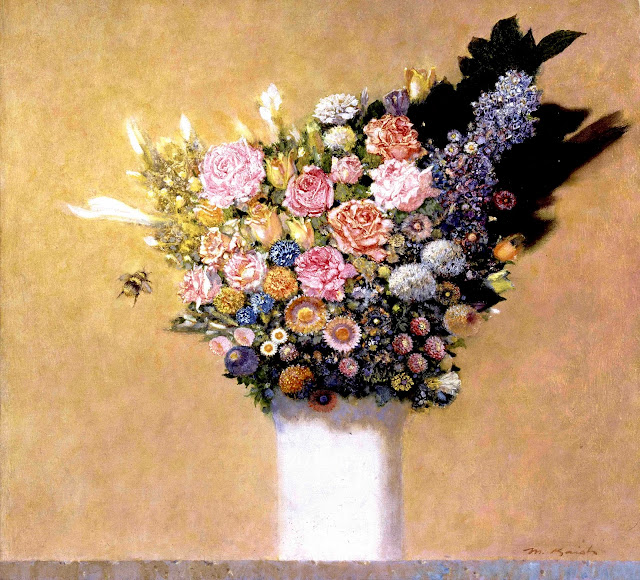