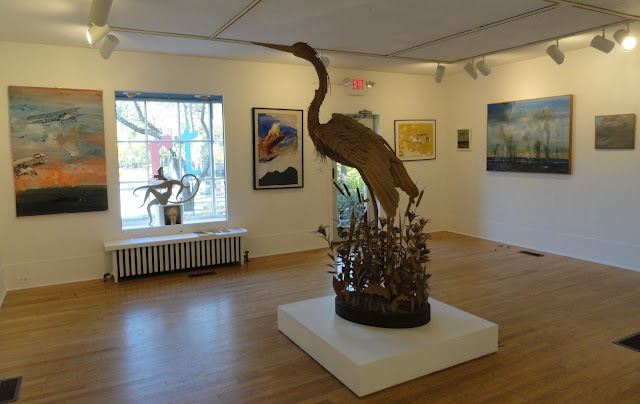 This show is titled "STILL AT IT..."  Fair enough as the 2 artists, Robert Andrew Parker & James Grashow, are both well over 3 score years & ten - & very active fellas. 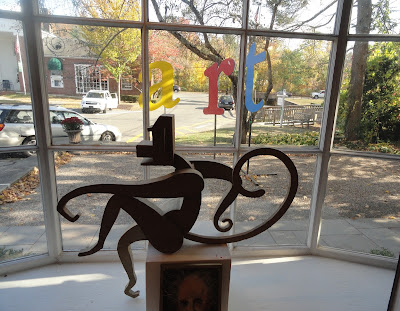 Friends for many years, their styles are poles apart but mesh really well. Grashow, a sculptor, works with intricate detail. 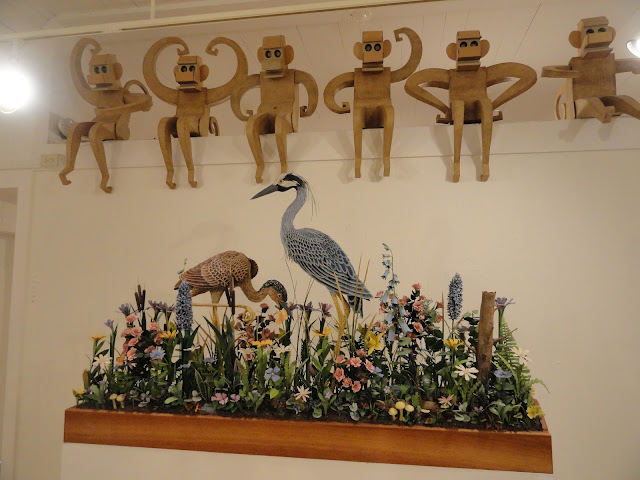 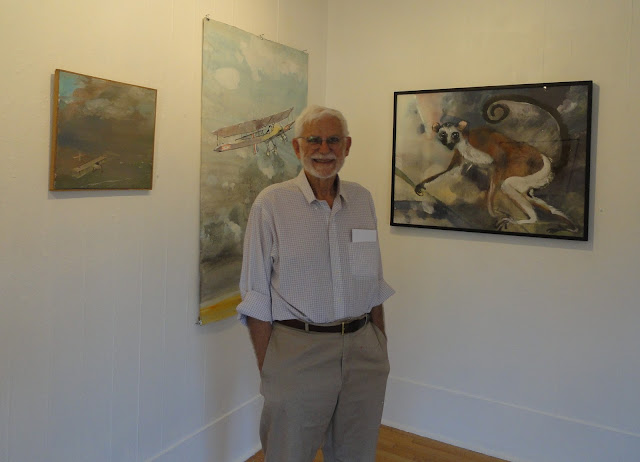 ROBERT ANDREW PARKER
Parker is a painter/printmaker with a fluent light touch. A new series painted this year from the New Jersey Shore exemplifies this with its lively blobby bathers & dashes of coloured umbrellas dancing, tilting & swaying across the sky.  He's like a magician conjuring up a fleeting image, a trick of the light, a turn of the head.

Parker graduated from the Chicago Art Institute in 1952, later working at the famous Stanley William HAYTER's ATELIER 17 in New York. He had his first solo show in 1954. 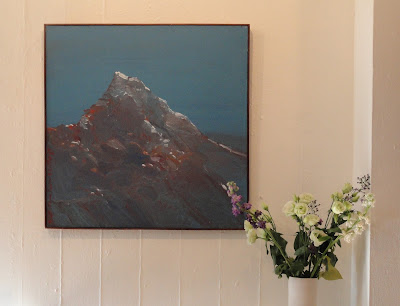 In this particular show both men, by chance or serendipity, include monkeys. Parker studies singular, individual creatures ....  Looks them in the eye, just as he does 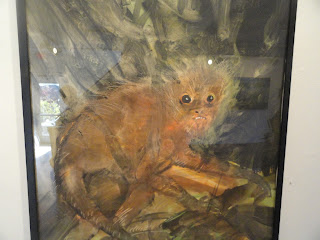 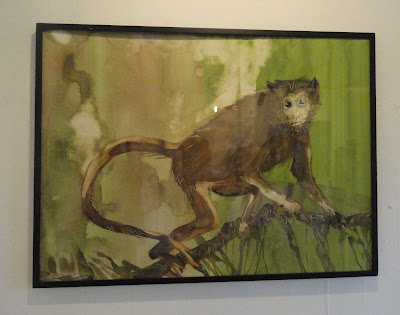 just as he does with his lively dogs: lovable Romeo, stately Hugo or Mrs Hinchman's Whippets running free. 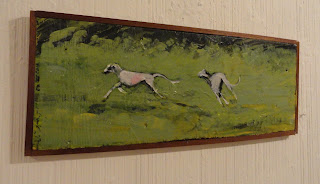 These dogs exemplify Parker's approach to almost any subject. He manages to capture, condense & simplify at speed, using loose brushwork to encapsulate his reaction to a particular scene with a swift, almost expressionist technique. 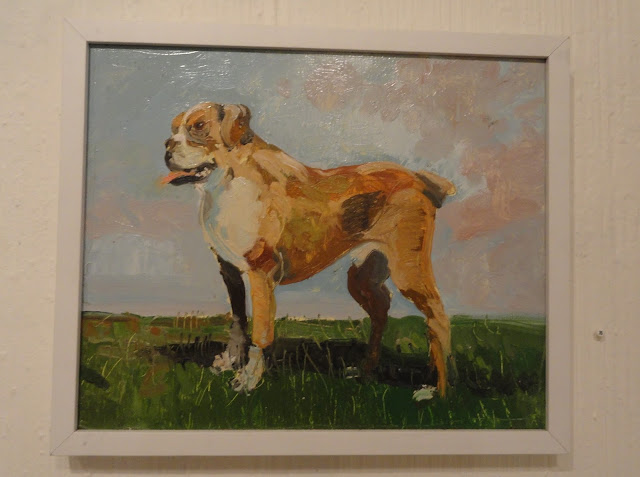 JAMES Grashow's hoard of monkeys balance, swing & chatter. All are made from ordinary cardboard! Amazing. And the detail he can engineer is equally impressive. 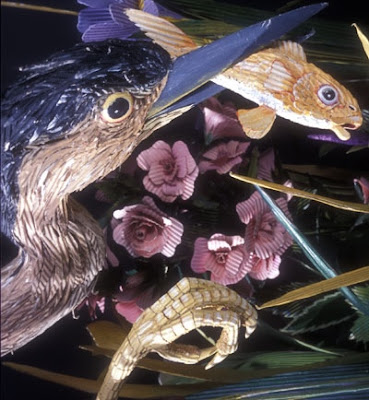 More animals include Grashow's meticulous Rooster & a huge Crane, and shoal of giant fish all made from cardboard.  Grashow lists the vital elements of his life as "wife, children & cardboard!" 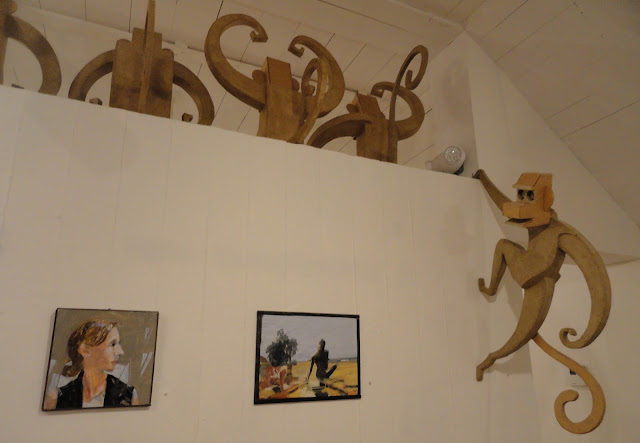 In fact all of GRASHOW's work is made from banal cardboard.  "Boxes, tubes, sheets of corrugated - everything that lives between the good stuff & the garbage becomes a perfect partner for play. Its very valuelessness liberates us. Corrugated board is the DNA of creativity. " 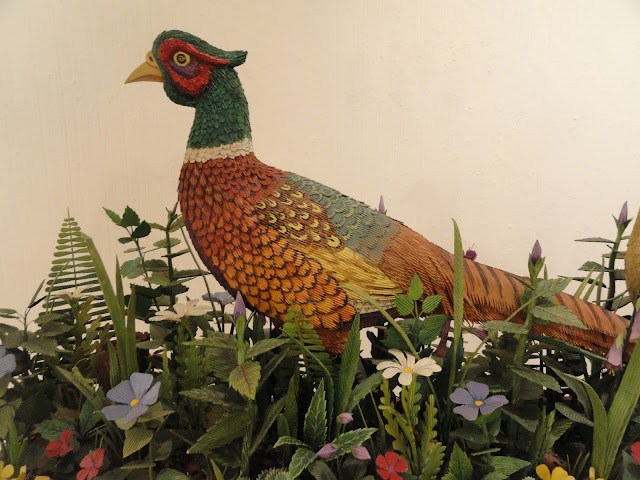 Grashow was born in Brooklyn, trained at Pratt. He has been creating works that address themes of man, nature, & mortality since his first sculpture show at the Allan Stone Gallery in 1966. Recent work is with birds & corrugated cardboard. 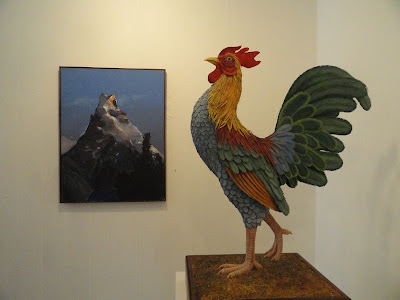 This pix demonstrates how well the show is hung, and arranged so that the 2 artists gel. Rooster by Grashow; The painting by Parker is of Mancha Pichure, in the Annapurnas Range in the Himalayas.

Parker has always liked to walk - often getting off at 125th St & walking the 10 miles to Battery Park (that's about a 3 hr walk according to Google,) before getting a rest by sitting on the (free) ferry to Staten Island.
In 1981 he joined a trek to the Himalayas. Ten years later, aged 64, he returned, and the
Himalayas have provided inspiration ever since for a series of mountain landscapes like the one here of Annapurnas, near Nepal. "We only got to 19,800 ft - but that's pretty high! I loved it. I'm glad I did it."
The first visit was he said "Chaotic. We got to hate some of our fellow trekkers!!"
The second much better but he lost 30lbs and came home with pneumonia. 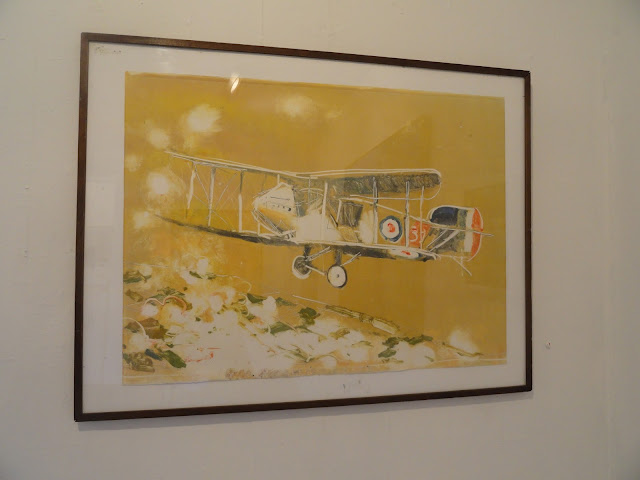 From childhood Parker was always interested in military stuff, regiments, battles, war, etc collecting toy soldiers in a big way. Remember he was 12 when the 2nd World War began. His brother & he made many model airplanes. "His were perfect, mine a bit slapdash."
He continued his fascinated with early flight etc, & 1st & 2nd World War shipping, as you can see here, for PARKER's show includes a series of paintings of early aircraft & ships. 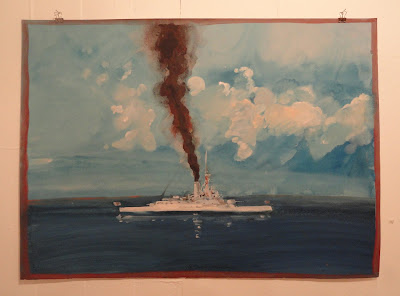 Parker's light touch & quirky approach to art & the art world has enabled him to produce all sorts of work in 2 and 3D including a series of about 100 illustrated books - which I just love. They range from "Insects of all Nations"  'German Humor',  'Hiking Man' and 'Randolf's Dream" to the story of the Wright Brothers  & his best seller, "Who was Einstein?" The latter is now available in 30 languages; u can get it on Amazon. "It's the only one that's made money!"

His studio is a magic place, a workshop full to the brim with ideas & objects; plans, printer & press.. 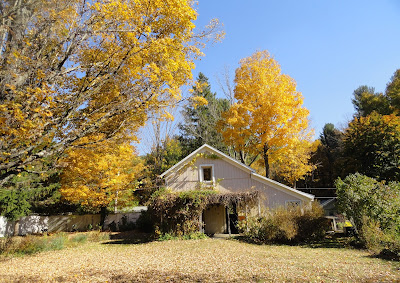 -somewhere were he can indulge his imagination & create stunning images and evocative pen and water-color illustrations to enhance any story with drama and wit.
"Long ago I discovered that you didn't need to do adult pictures- still lifes and stuff like that. You could make somthings up. And the books - Nothing to do with facts it can all be arbitrary. It can be what you want it to be." 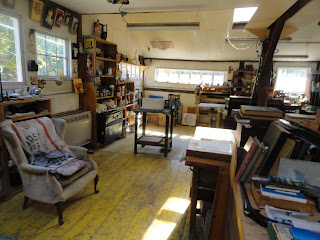 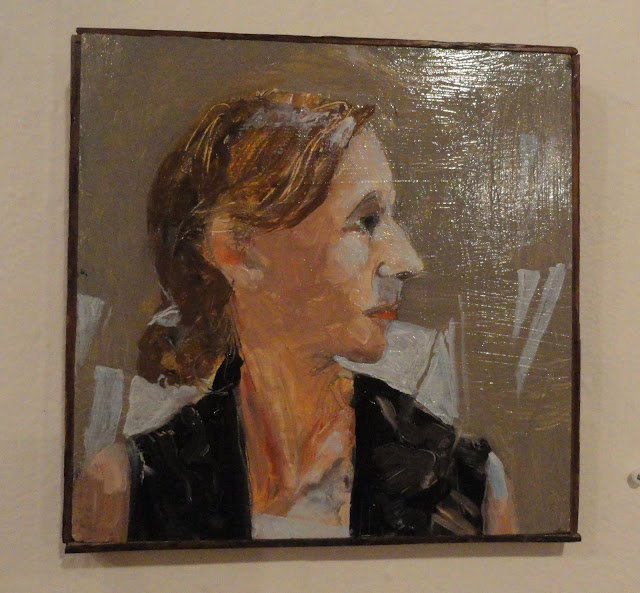 This energetic, young at heart artist, now 89, (and also a dedicated drummer) has yet more work in the Ober Gallery, Main St, in Kent, Ct.  Last year his 60 year retrospective was in Pasadena. What will tomorrow bring?! 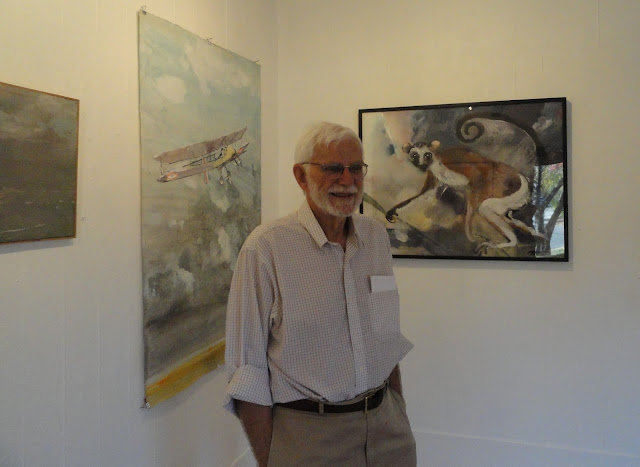