What would Paolozzi say to the new minimal sculpture? 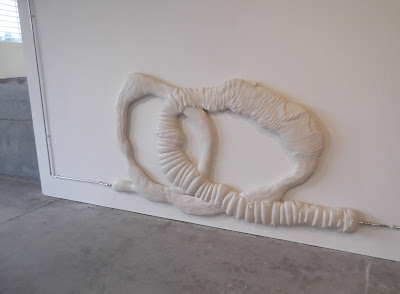 It's a far cry from the damp squalid space where it began life in 1988. 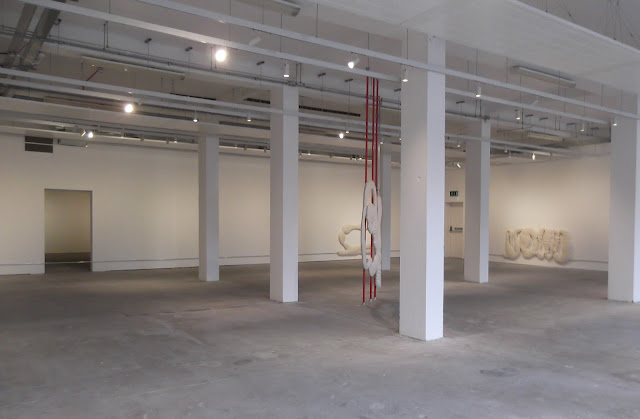 Working with an industrial process called Jesmonite, (a popular gypsum-based material in an acrylic resin) which normally provides warm cosy underfloor heating, he has squirted loops and bumps of shiny off white glutinous fibreglass-style foam onto a couple of walls & some pipes. 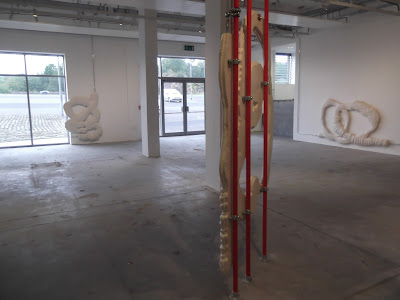 These act as functional radiators making the normally frigid space quite comfortable. His concept is to suggest bodily circulation via this circulatory pipe & foam sculpture. 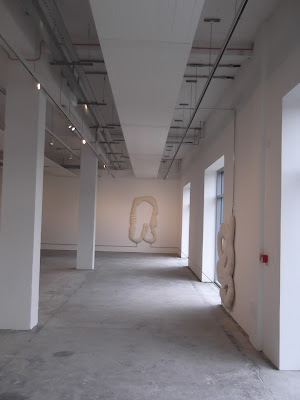 The gallery is already well endowed with pipes so Deshayes'scontribution has a look of  'here to stay.'
It makes for an arid, minimalist presentation. Despite its intriguing title, Darling, Gutter, it's nothing very exciting. 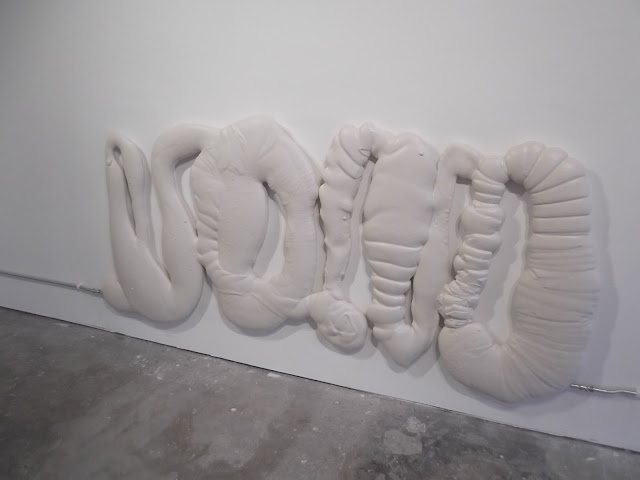 Artistic director of GSS is Kyla McDonald, former Tate curator, currently one of the 4 Turner Prize judges. On this showing, she will go for the most minimal Turner contribution. 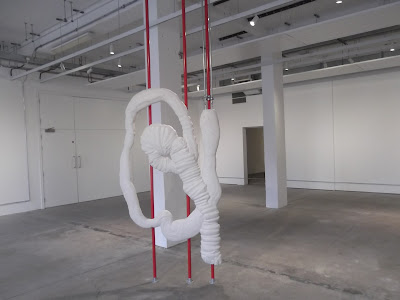 Across town & the other side of the River Clyde, Kate Thomson has created " River Spirit" a permanent public artwork uniquely site-specific to Oatlands Square. 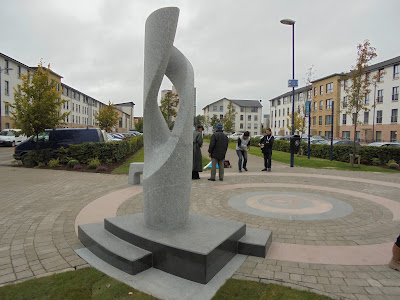 Oatlands is a new neighbourhood of around 1500 houses (81% private & 19% for social rental) being built by Bett Homes. It comes after a long process of demolition. There will be a park for kids and the entire design evolved in consultation with local people through a series of public exhibitions, meetings and workshops. 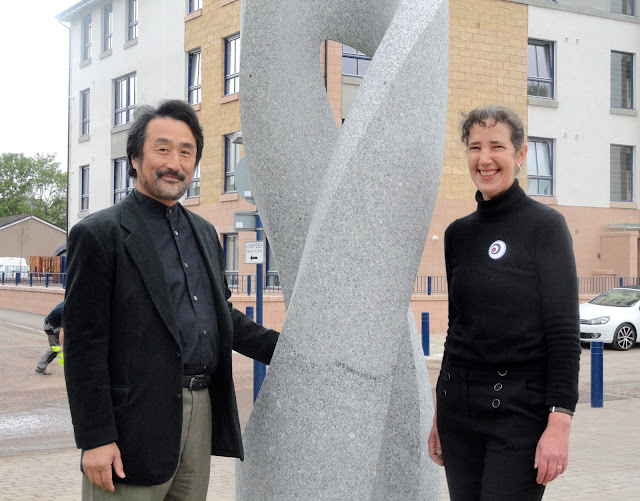 Kate Thomson was commissioned to create an open-air community hub - a focal point for events as well as a place for people to sit, meet, & relax together. She has a long track record of working with the community in Glasgow going back as far as 1987 & the Gorbals Fair Project, plus was Organiser & a participant in the 1988 “College Lands Sandstone Sculpture Project” Glasgow. 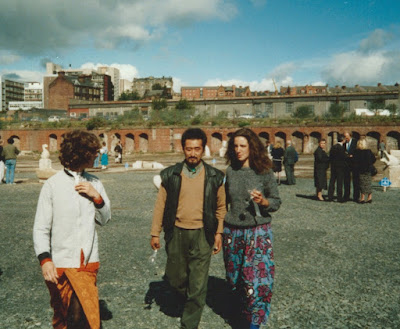 She tells me, "It started because Katagiri & I saw a huge pile of sandstone blocks from the demolished railway arches on the Miller Homes building site...so I managed to persuade Millers to sponsor a project for about 18 or 20 sculptors from Glasgow to work on site to reclaim the demolition stone Into sculptures.
I was initiator, & producer for the project. Katagiri was Technical Director - having him there meant that most of the sculptors who had never worked In stone before had a real chance to learn from him in order to be able to work with the sandstone, resulting In a wonderful range of work. Several of the sculptors continued to work in stone afterwards. We all worked on site, then exhibited the work there before Millers started the new building work." 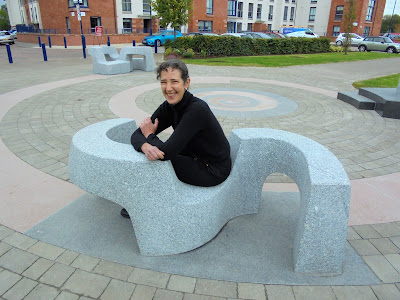 Now, taking her inspiration from the meandering nearby Clyde & Celtic patterns, she has created 3 sculptures & a circular paved area made from Portuguese, African, Indian, Chinese & Scottish stone, each a different colour. 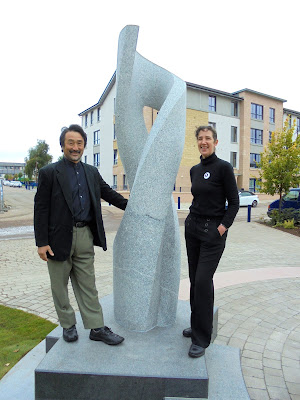 The 3 pieces are carved from a 25 ton block of granite, working at Aberdeen's Fyfe Glenrock with " solid blocks of Portuguese Norden Grey granite, set on bases made from African Bon Accord granite, & connected by rings of Scottish Corrennie pink, Indian Butterfly blue, and Chinese red granite paving." 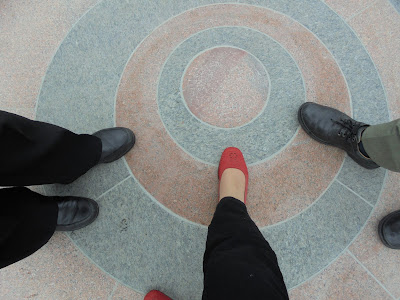 Facebook was used to provide an exemplary account + pictures, of the processes, trials & tribulations involved. Have a look on Fb at Oatlands Square Art. Terrific. Kate is based in Scotland & Japan. With her husband Katagiri, they set up the Ukishima Sculpture Studio. 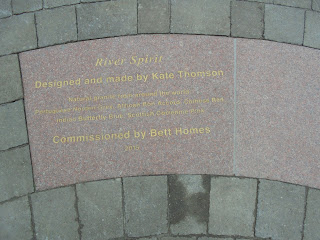 Last but not least a great book PAOLOZZI REVEALED, by Ann Shaw 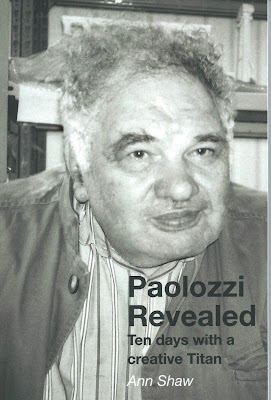 In 1996 Ann joined Paolozzi's Masterclass at Edinburgh College of Art. He asked all 18 students to keep a diary.
As a longtime journalist of the Herald, Ann documented her days and recorded the events, warts and all. Her unabridged account is a lively read indeed!