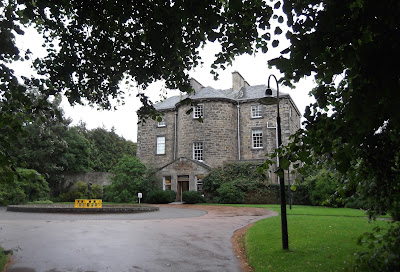 The John CHAMBERLAIN exhibition at Inverleith House in Edinburgh's BOTANIC GARDENS is a pleasant surprise. The first time this famous US sculptor has been shown in the UK, he is best known for using pieces of rusty old crushed car metal to create monumental works. How would that look amid the verdant Botanics? 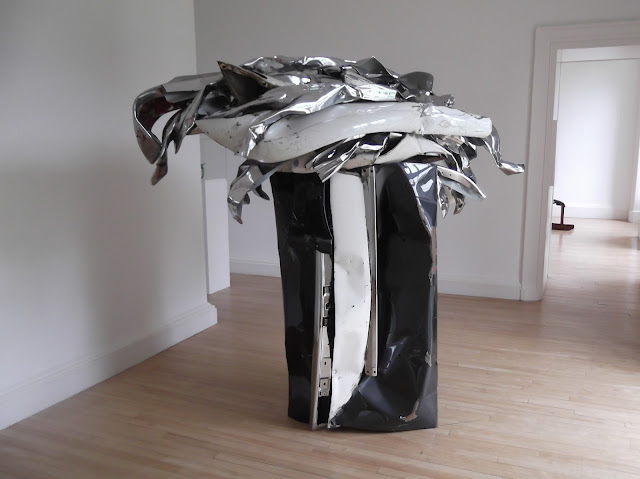 In fact this show of 19 sculptures includes much more than the crumpled car parts, & gives an idea of Chamberlain's entire career. The sculptures range from 1965 to 2010, (a year before he died,) & include work made from sparkly  coloured aluminium, painted squashed coffee cans, beautiful polymer resin & questionable Urethane foam. Add in a film featuring Warhol superstars! 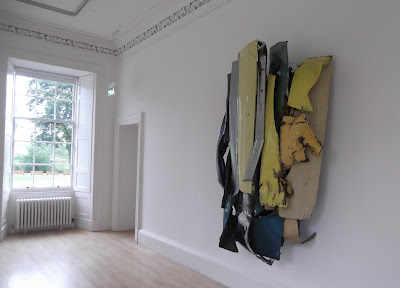 In 1957 aged 30 JOHN CHAMBERLAIN moved to New York & began creating his sculpture from car scrap metal welded together. Like all young artists he had little money for materials. He had been fleetingly at the Chicago Art Institute. In NYC Abstract Expressionism was then flavour of the year with painters like De Kooning, Jackson Pollock, Franz Kline & Larry Rivers. Chamberlain was to bring the Abstract Expressionist style of painting into 3D. 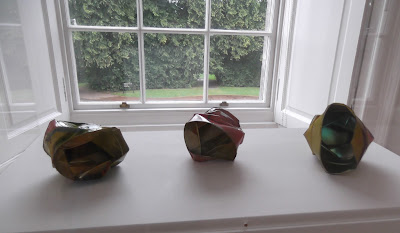 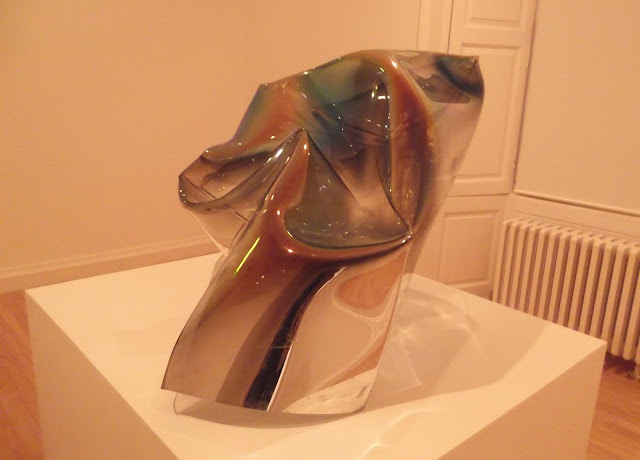 The entire exhibition is superbly displayed. One silver, white & grey metal sculpture, BishopBudd from 2009 sits in one room alone in solitary splendour, well worth the visit by itself. Luna Luna, 1970,  made from synthetic polymer, is so very elegant . Made me think of  Larry Bell's plexiglas sculptures of the same period. 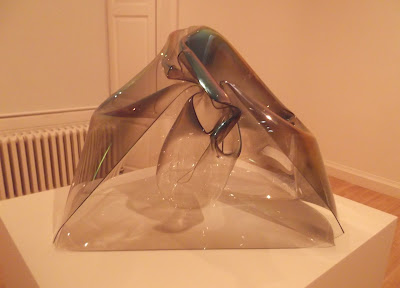 However I found most of the 6 small foam pieces really ugly. Foam usually used in cheap chairs or student sofas, is pretty ugly in itself. Tied with cord round its middle into various bulging shapes does not improve it. Some, like Stuffed Dog  have the appearance of a left-over donut. However one piece, cut & shaved into something reminiscent of a Greek urn, was surprisingly elegant. Were these pieces to be cast in bronze perhaps? 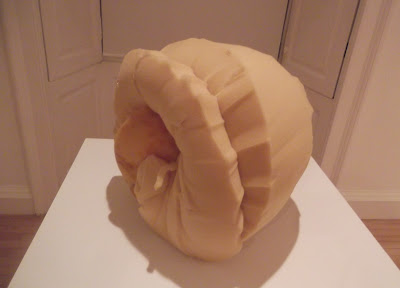 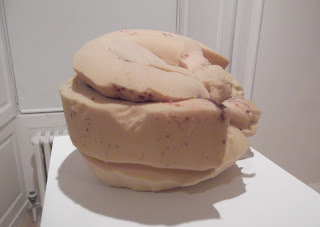 The show contains tiny maquettes for the large pieces outside. Twisted & tied metallic string or foil cord is translated a thousand times bigger into circular tinsel bows named Ritzfrolic or Naughtynightcap. Coloured in bright green, pink or bronze, these aluminium public art pieces look as silly as the titles. 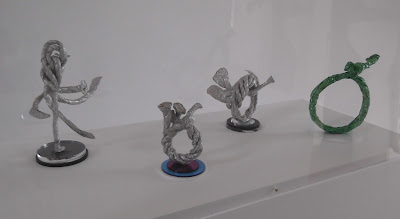 Ritzfloric at 15 ft high is a bit big for a noose or a bow, tho' it's glitzy shiny like a Jeff Koons baloon piece. In 2011 Chamberlain's Nutcracker (1958) sold for $4.7 million, a record price for the artist at auction. 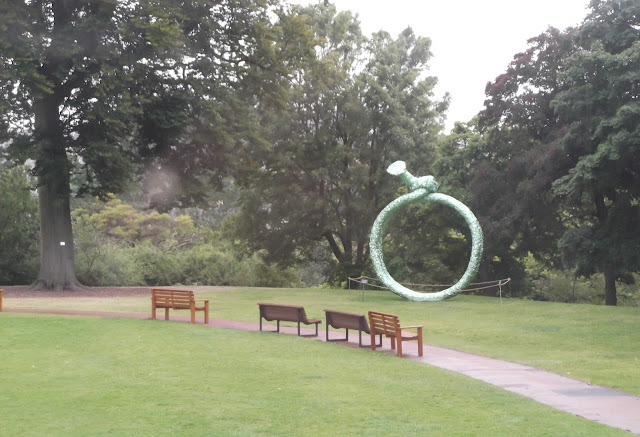 Chamberlain was a larger than life character.  A big man, very tall, 4 times married, he drank a good deal & was known as a hell-raiser. He began life as a hairdresser, (so that he could meet lots of women, he said) & having had little training, worked by instinct, In 1957 while staying with painter Larry Rivers in the Hamptons, & looking for cheap, accessible materials, he pulled 2 fenders from a rusting 1929 Ford & made a sculpture by running over the pieces repeatedly with a truck to bend them the way he wanted, then he fitted them together almost like jigsaw puzzle. 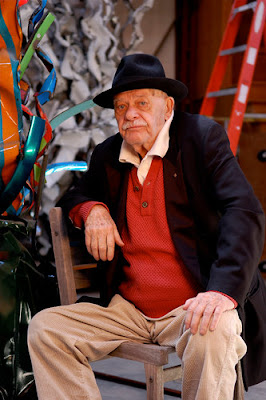 A self-described collagist, he explained, “When a sculpture is nearly done, you can put things on and you take them off and it doesn’t make any difference,” he said. “Stopping is the key; you have to know when to stop. If I feel so glad that a sculpture is here, and I don’t care who did it, then I figure it’s a good piece.” 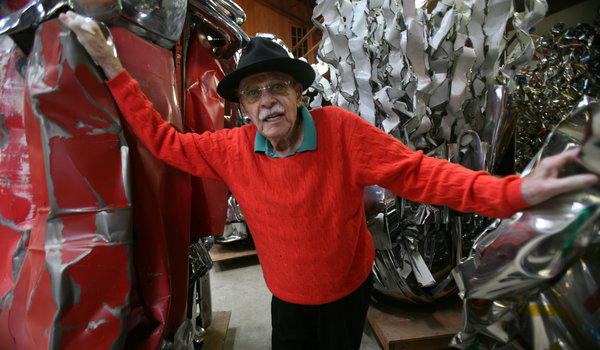 Chamberlain used these jagged edges & curved surfaces of scrap yard car wings, fins, boots & bumpers in a spontaneous, instinctual process, often building monumental pieces. But he was annoyed by the public's frequent response. “For 25 years I’ve been using coloured metal to make sculpture, yet all they can think of is, ‘What the hell car did that come from?’

Latterly he said: “I think of my art materials not as junk but as garbage. Manure, actually; it goes from being the waste material of one being to the life-source of another." The show runs till Oct 4th. 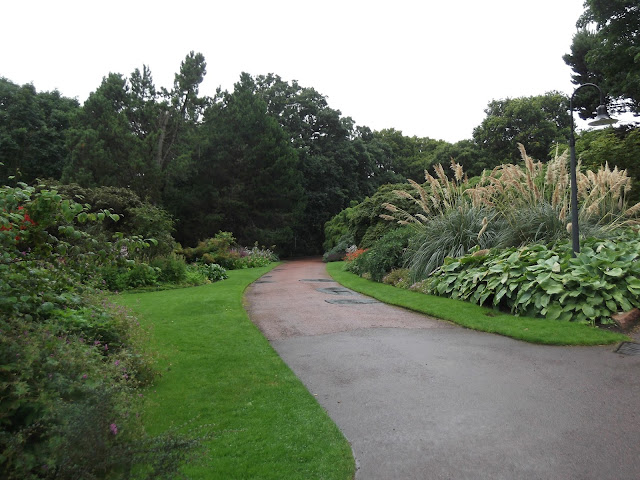