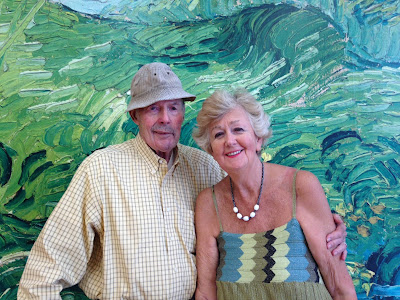 
VAN GOGH & NATURE - 50 paintings loaned from all over the world. 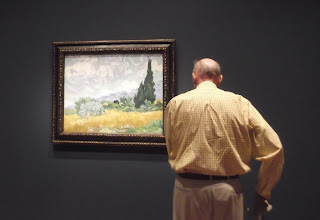 How many millions - trillions - of VG reproductions hang in schools, hotels, hospitals & student digs? Both my husband & I had a copy of London's Wheatfield with Cypresses  as a teenage pin-up. But my husband's committment was more serious. At 18 his European visit included a pilgrimage to Arles, St Remy & VG's grave. In 1950 when NY's Met held America's 1st major VG exh, he took the initiative of phoning his nephew, Theo's son, Vincent Willem Van Gogh, to invite him to come speak to his fellow students at Columbia Uni. "I took the subway to his hotel, The Beekman Towers." So began a friendship, & Phillip's subsequent visit to their home in Laren, Holland. "I drove from Paris in my uncles's .. car. Willem was then 60. I was 20. My bedroom was full of VG paintings. Mrs VG asked me how I wanted my breakfast eggs cooked. I could have died happy! " 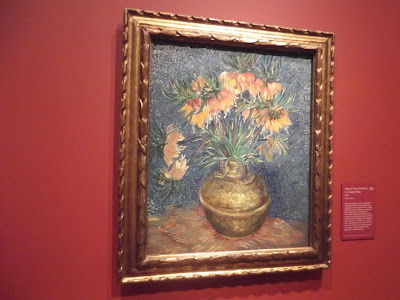 The Dutch Government was slow to show an interest in VG's archive. Vincent W approached Phillip with a view to helping set up a VG Foundation in the States & organise touring shows. Eventually In 1962  the Dutch came on board, but VG had already profoundly changed Phillip's life, giving him a lifetime's passion for artists & their work. The Van Gogh Museum was not founded till 1972. 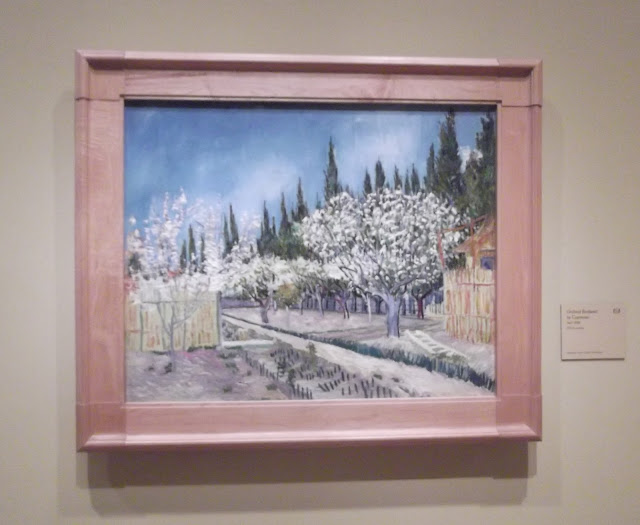 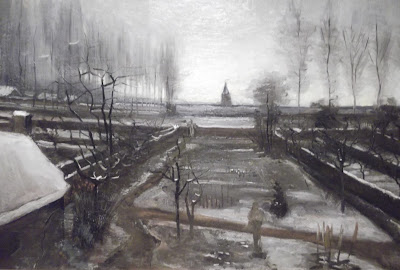 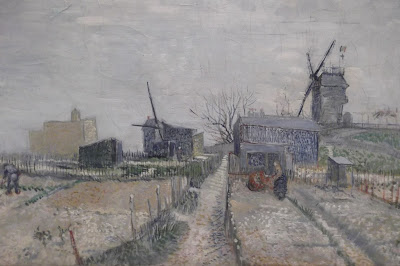 then Paris with its parks & Montmartre windmills & allotments, (Glasgow has a good oil) the focus is on nature throughout. 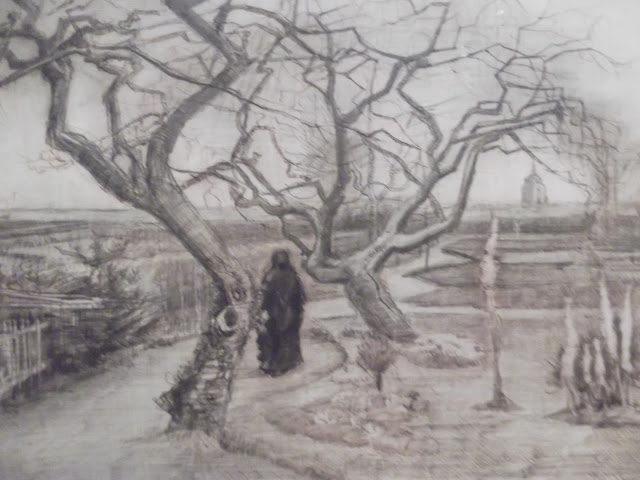 Especially good to see detailed pen drawings of his scrutiny of insects & birds with a giant Peacock moth 1889 appearing also on a strong oil. Close up butterflies flit across irises & poppies. 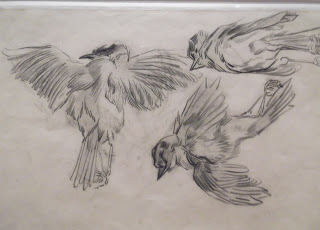 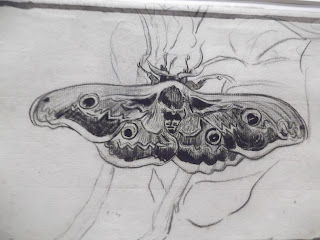 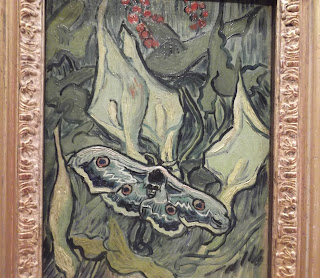 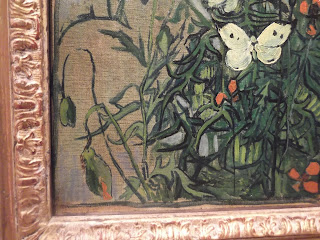 Orchards in bloom in Arles (from Otterlo) are a froth of white. "Nature here is extraordinarily beautiful" he wrote to Theo. 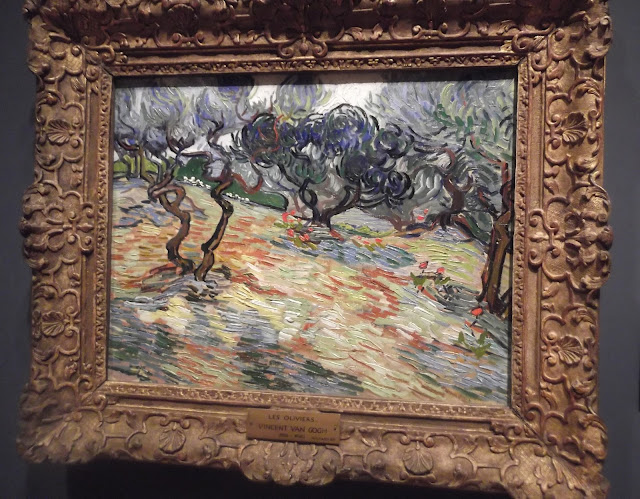 By 1989 he was painting frantically, 2 or 3 works a day, urgency propelling his brush into arabesques or curls to create well known, beloved images of olive trees, cypress trees & the ever present wheat-fields burning gold under the blazing Provencal sun. 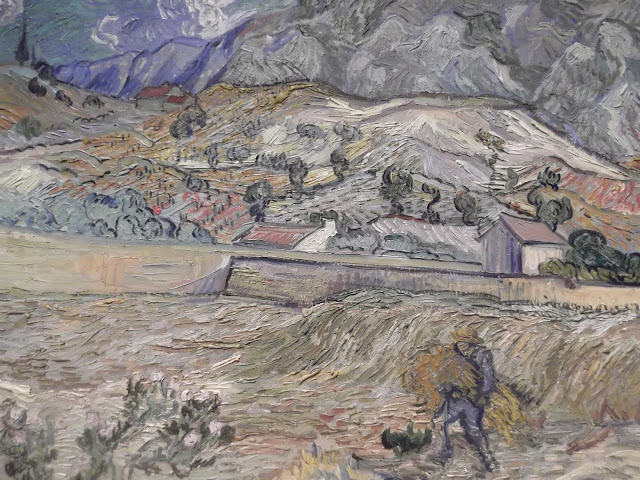 Van Gogh spent a year at the St Remy hospital, where he had 2 rooms with windows overlooking the landscape of corn. Using one as a studio, he painted 150 pictures here: hillsides, rocky terrain, trees, the gardens nearby. 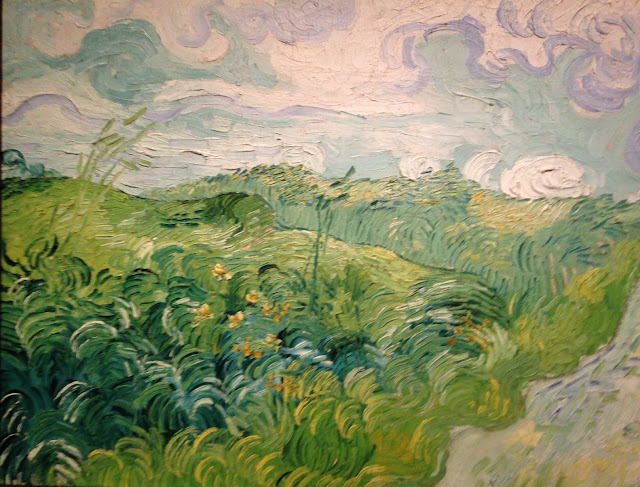 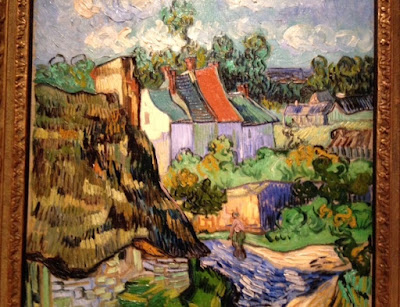 Colour - so drab at first, became lush, rich, joyful. A late oil, the dramatic, spare Rain, Auvers, on loan from Wales, ends the show, a sad reminder of his tragic end. 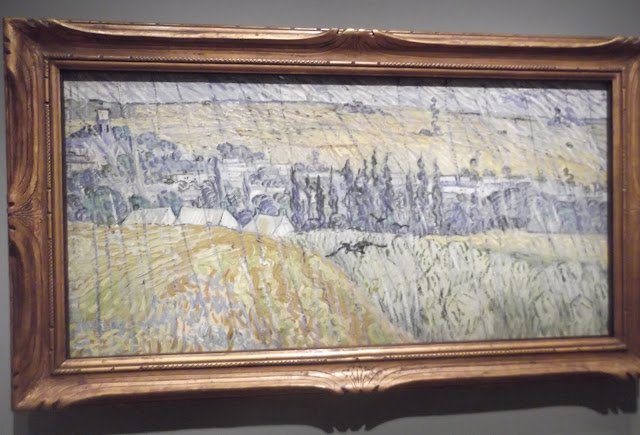 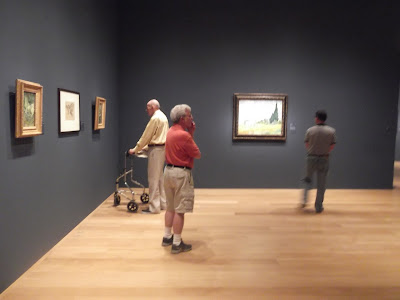 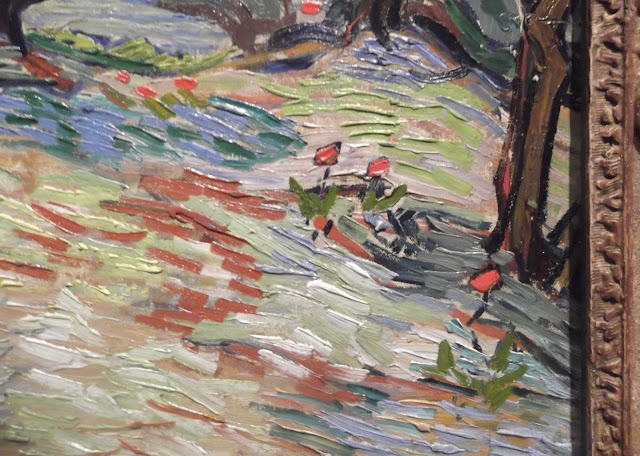 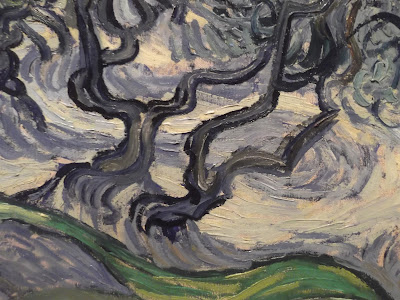