If u have ever done a potato cut u will love & understand CUT,  a celebration of WOOD CUT in all its glory, from fine engravings to big, bold hacking with a side detour to Asian style work. 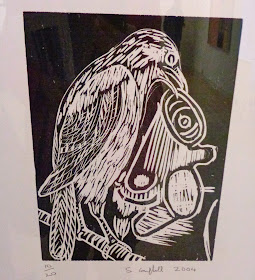 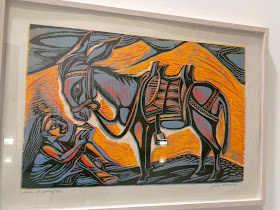 A pity she is not included upstairs - where she deserves to be, perhaps next to Eileen Cooper, whose barefoot girls dance with abandon. (What used to be called 'gay abandon' by previous generations!) 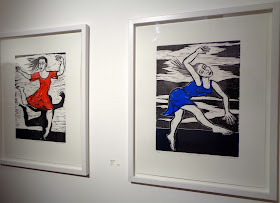 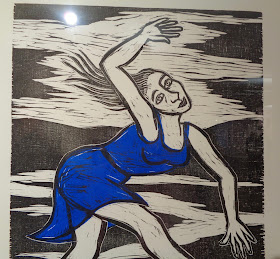 For Janka had the right idea about woodcuts. Be bold, outrageous, ambitious - it's an expressive medium. Peter Howson's 3 mammoth Dosser series is one of the best. Strident, and aptly, on a heroic scale. 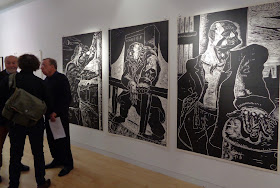 Steven Cambell also did huge woodcuts, tho none are here. I remember one, on Japanese paper, used in their New York apartment as a curtain between the baby's cot and the living room table! All sticky fingered too! 35 years on, it may be in a museum! 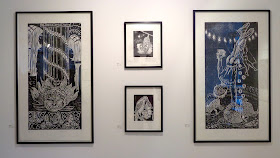 Campbell is however represented by 4 good, if smaller, prints, all for sale too.
ADRIAN WISZNIEWSKI presents an installation: a wall of B&W portraits plus an actual 3D sculptural head. Looks terrific. 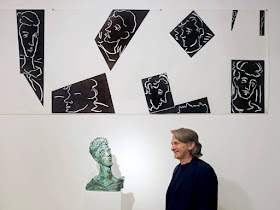 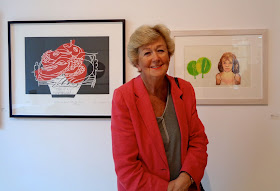 Another impressive series is by Turner prize winner Grayson Perry, 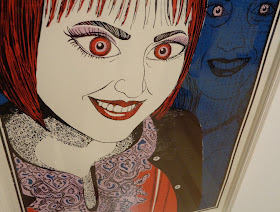 - expensive but interesting. The colour is via lithography, with details printed from a very elaborate woodcut printed in black on top. 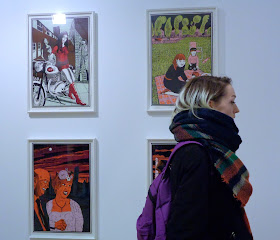 Yet woodcut can be subtle too, especially when created in the Japanese manner. Here PAUL Furneaux is an expert.
After Edinbro and a stay in Paris, he spent 3 years on an MA in Japanese woodblock at university in Tokyo.

He still travels to Tokyo, exhibits there & had a residency on the edge of Mount Fuji, as did Ellie LAMB.  He has learnt & developed new techniques, but he says, is still learning old ones- like spending a whole day learning how to sharpen one tool!
At GPS tools on display help visitors to understand the processes, both simple and complex. 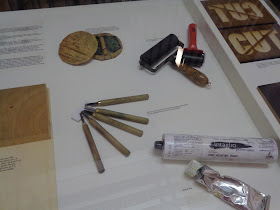 In this Japanese method colour is applied with brushes, not rollers, & the blocks are printed by hand, in the traditional manner, resulting in soft, often flowing colour. His large piece, Pink Sea, Mokuhanga, is an impressive harmony of rectangles of subtle ribbed texture and colour. 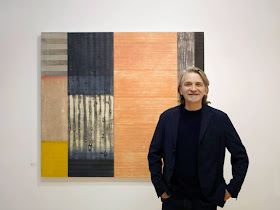 Eli LAMB is another Scot who has studied in Japan. Here she shows 3 works utilising Japanese techniques. Seen here is Reindeer, Badger & Moose. It uses her own handmade kozo paper, dyed with its watermark made by herself in Japan. She printed on the surface using Japanese mokuhanga technique which employs waterbed paints... The result is dramatic. 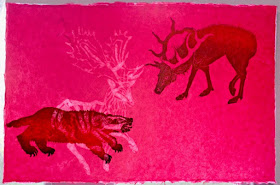 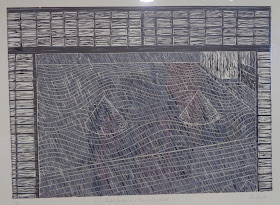 Extreme subtlety is an integral aspect of Japanese art. It can be carried a bit too far, as in exponent Rebecca Salter. Her Tabula series demonstrates the gray on gray of infinite, if boring, fine distinctions.
Martin Boyce & Claire Barclay have recently made minimal woodcuts at GPS. 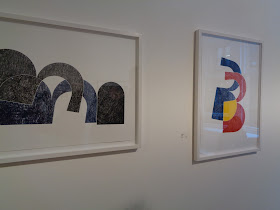 The show also includes WOOD ENGRAVINGS, quite different from woodcuts, in their fine line, delicacy & detail. They employ a hard wood, usually boxwood, but unlike big bold woodcuts, are engraved with very fine lines - just like engraved silver.

Here Lennox Paterson is the master with his evocative images. One print from 1943 engraved during the Second World War, depicts a mesmerising war-torn soldier or ARP warden during a raid, energy fractures spinning violently off from his helmet & face. Just wonderful. 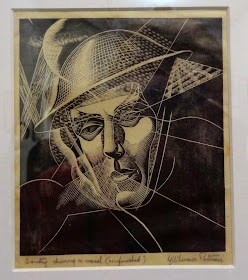 Another, dating from the 1970s it a lovely Jay perched in among acorns. I bought this print at least 40 years ago and treasure it still. 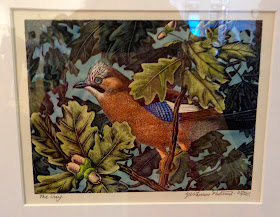 IAN FLEMING made this stark image in the late 1920s. 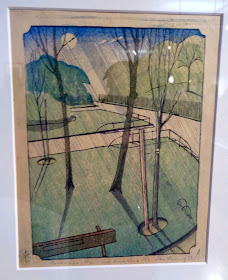 Current artists Murray ROBERTSON and Alistair GOW, both GPS staff, have explored wood cuts & engraving, among other media. Here is Gow on the left & Murray on the right with Murray's small engraving, from 1990. (also see below) 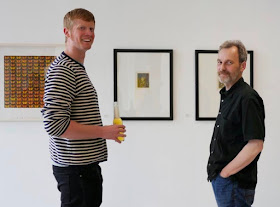 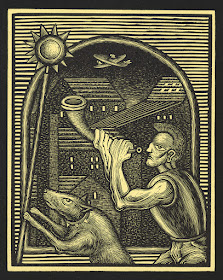 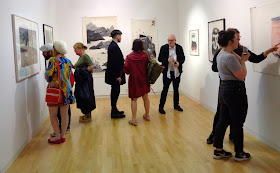 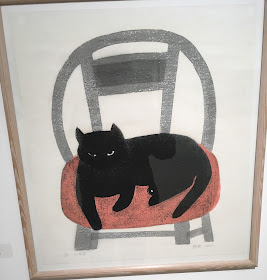 and also Professor Chen Qi's image for Beijing's Olympics made at GPS. U can also see his original blocks - most illuminating. 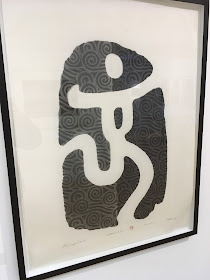 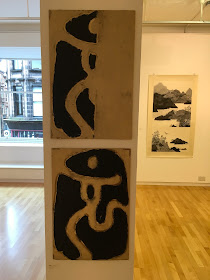 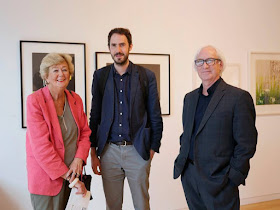 During my 1992 visit to Japan, courtesy of the Japan Foundation, I was lucky enough to be invited to the home of a prominent Japanese woodcut artist, whose work I include here. His home was tiny, as is normal in Kyoto, but every elegant, minimal, nook and cranny was filled with his various tools and creative implements ingeniously stored in little hatches, under the floor. He was kind, charming & it was a memorable visit. 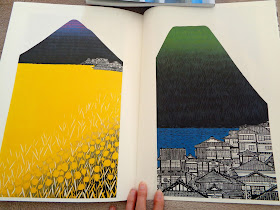 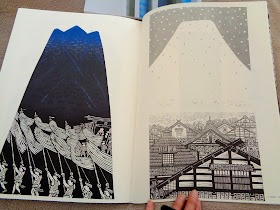 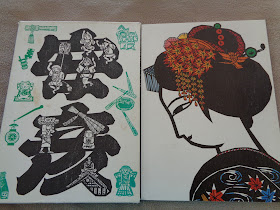 This is a great show to learn lots. I HOPE IT WILL INSPIRE SOME OF TODAY'S ARTISTS TO MAKE SOME HUGE WILD WOODCUTS TOO. 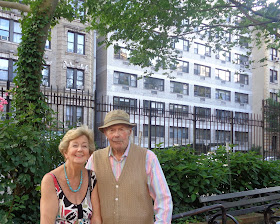