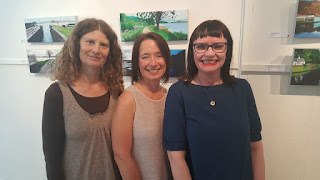 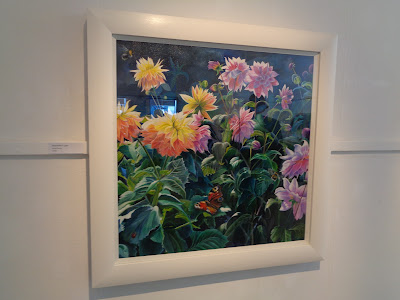 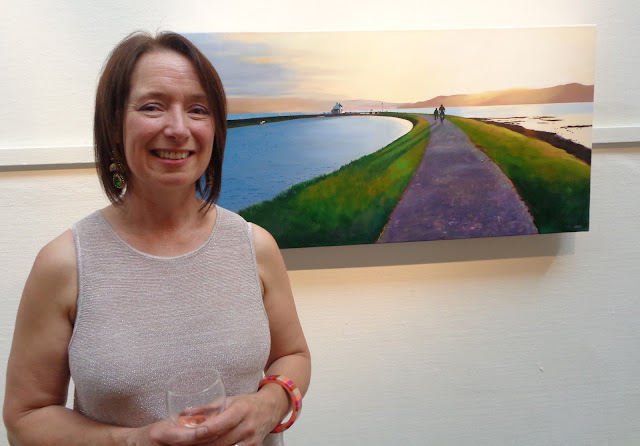 "I didn't expect this to turn out the way it has - but I loved every minute!"  LESLEY BANKS was standing beside her Clachnaharry Sunset oil talking about her 18 month Scottish CANAL painting extravaganza, where she covered every inch of the 137 mile network:  from Crinan's pretty & picturesque 9 miles to the impressive 60 mile long Caledonian Canal ending at Inverness. 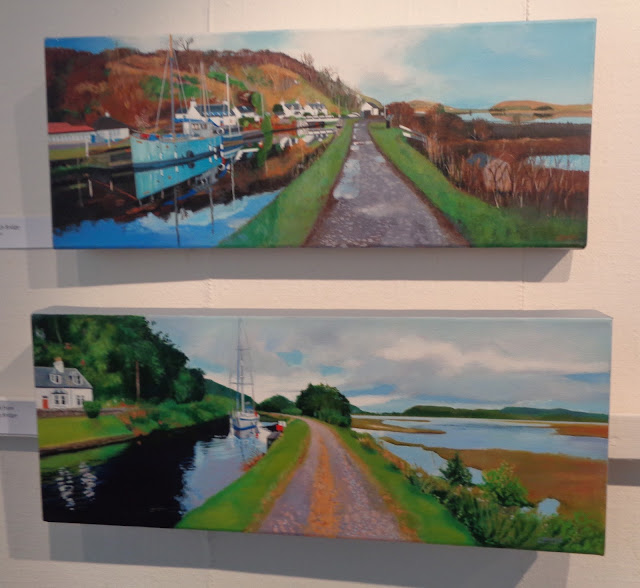 She and her dog explored in mist and sun, summer or winter. Mostly the towpath was isolated and peaceful. 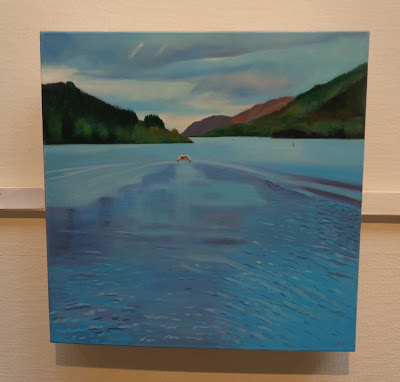 Water, water everywhere - a delight to paint and capture its moods, from sunshine sparkle to dramatic icy stillness amid deep shadow and mirror reflections. Banks has long been intrigued by reflections, painting canals in Venice & Amsterdam. "Sky & landscape co-mingle to produce new abstractions," she says. 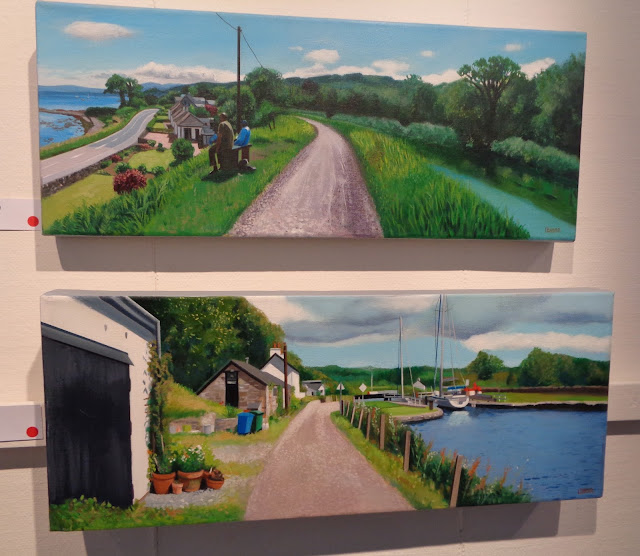 The results are truely impressive. A veritable tour de force. She has been able to capture the visual & romantic aspects of the canal waterways. To see this show is to experience a way of travel brought to a new reality.

"I discovered another world, of secret paths and friendly folk," she explains. "I found a sense of peace, contentment and safety. The solitary walks were not lonely. There was so much to see and the luxury of time to think and space for my imagination to wander." 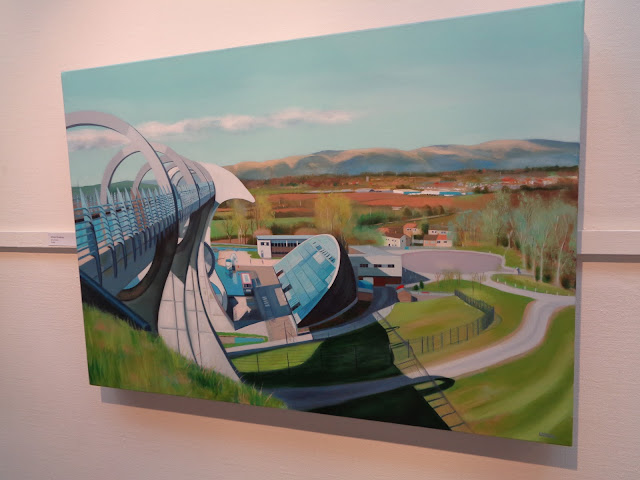 Andy Scott's KELPIES have shone a spotlight on Scotland's Canals with particular emphasis on the Falkirk area and its now famous Wheel, the world's only rotating boat lift. Banks manages to make a superb image from this engineering feat with the distant hills serene under a clear sky. Banks will be as famous for her canals as Andy Scott is for his Kelpies - and - says my husband - Van Gogh for his sunflowers !! 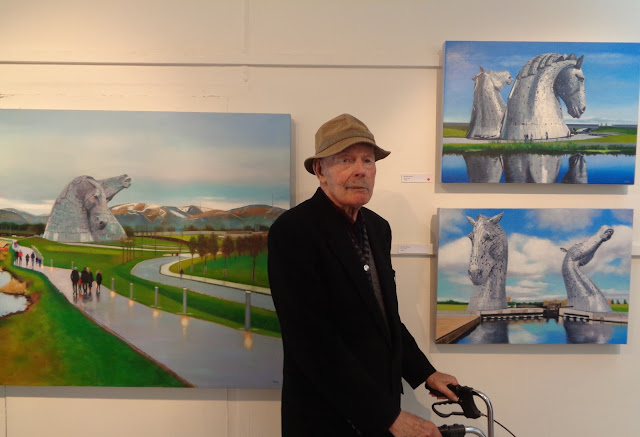 She has also tackled Scott's now iconic Horses in panoramic fashion: pictorially & artistically difficult, but an essential aspect of the Scottish canal world. 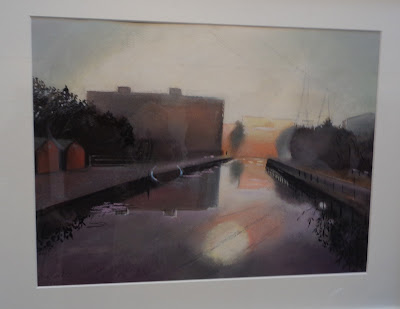 Of course the Forth &Clyde Canal also comes right into Glasgow,  and Bank's painting of the Whisky Bond building is one of her most successful atmospheric images.

In painting canals, Banks has had to conquer a rigid geometry, a firm perspective, because the majority of works take a central view of canal & tow path, as they converge towards a single 'vanishing point' on the horizon. That she has done so with such ease & control, is impressive. 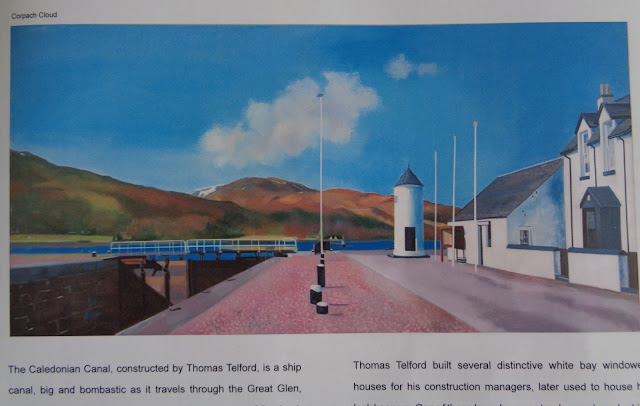 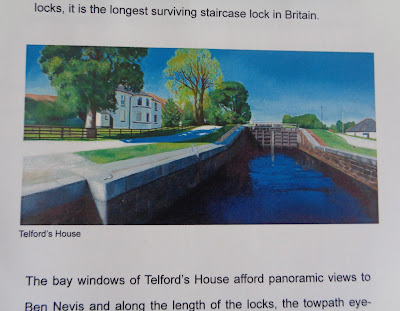 The cottages alongside, the fences & fields, trees & bushes, railings or reeds, all
enhance this rigid perspective and turn it into a new dimension of reflected light. These clever compositions, together with glowing colour & extraordinarily good weather, combine to bless the Scottish canals. Clachnaharry Sunset is an especially memorable image & deserves to go into a public collection. 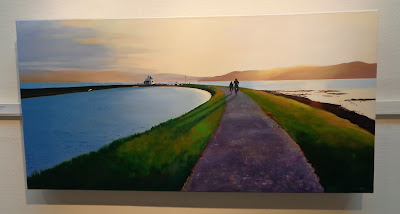 There is an excellent catalogue full of info on each canal & Banks' reactions to them. The only thing missing is a canal MAP!  Please, someone from Scottish Canals, supply one asap.
And GONGOOZLER?? A gongoozler is a person who enjoys watching activity on the canals of the UK. The term is also used more generally to describe those who harbour an interest in canals and canal life, but do not actively participate.  The word comes from Lincolnshire dialect: gawn and gooze, both meaning to stare or gape.
And that's exactly what u should do at Lesley Banks' exhibition. Look hard and long, u will be rewarded with vistas of natural beauty, only to be found in Scotland. 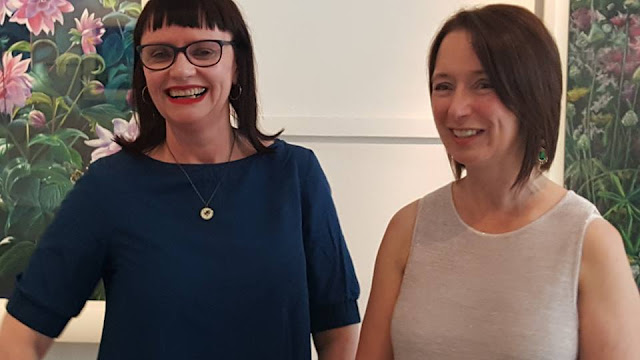 MARIE BARBOUR
Barbour's interest is her garden & the flower paintings that result contain her love that all gardeners cherish & share. The star piece here is a beautiful oil of glorious dahlias alive in sunshine. 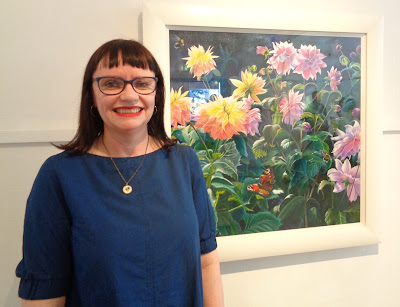 Small and more intimate studies of candytufts, poppies and bees+ 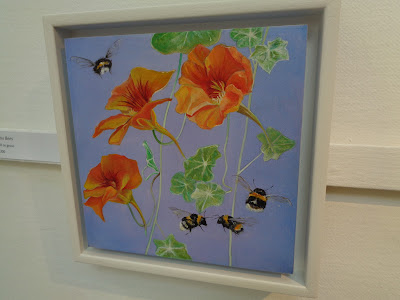 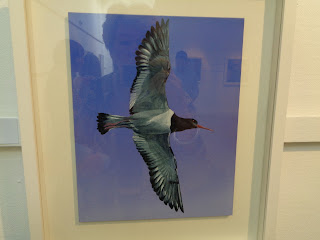 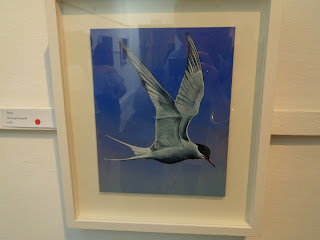 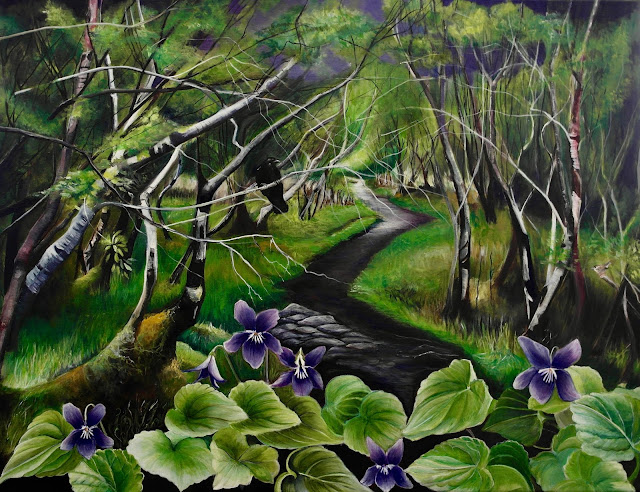 or a compelling view at night over the roof tops, the sky luminous & clear, 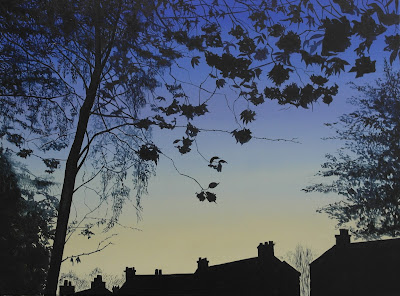 all these images make for a lovely show which focuses on nature at her best.

FRANCES CORR's tiny paintings of sparse heath, dank fields and bogs are rather overshadowed by the plethora of lively canal pictures next door. Her focus is the minutiae of mud and lichen, 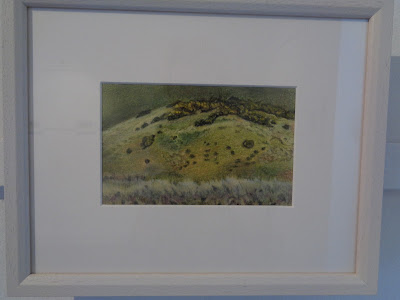 "bogs and tussocks, funny round hillocks, damp patches and moss covered everything show some of the things that go on in the world of this particular ground. Life & death in a field."